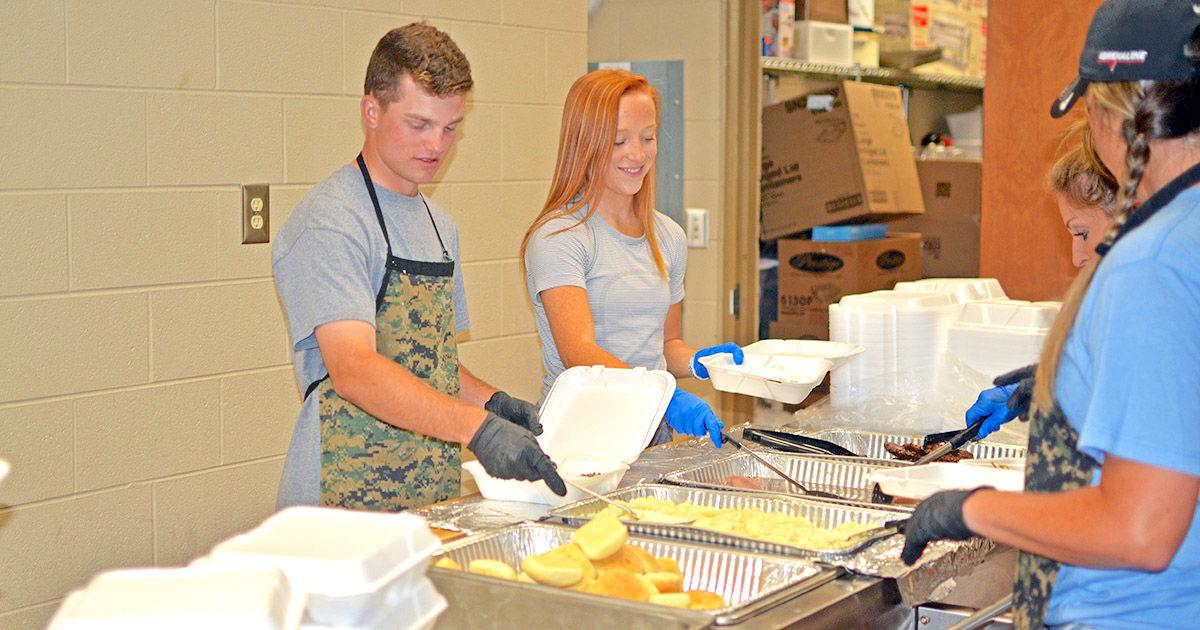 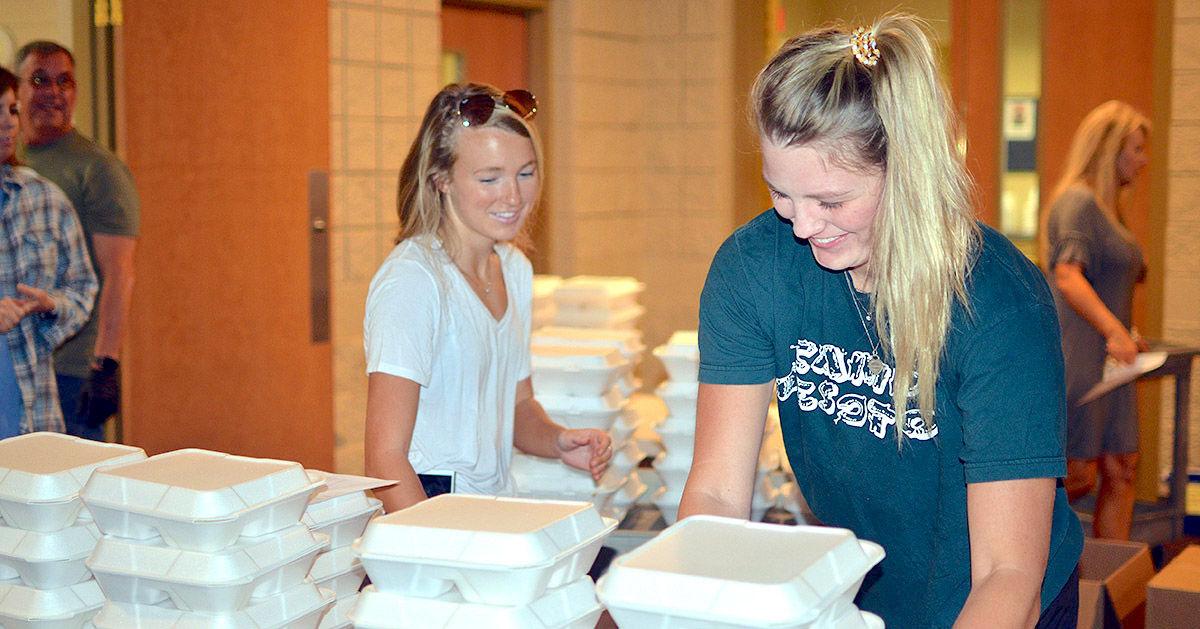 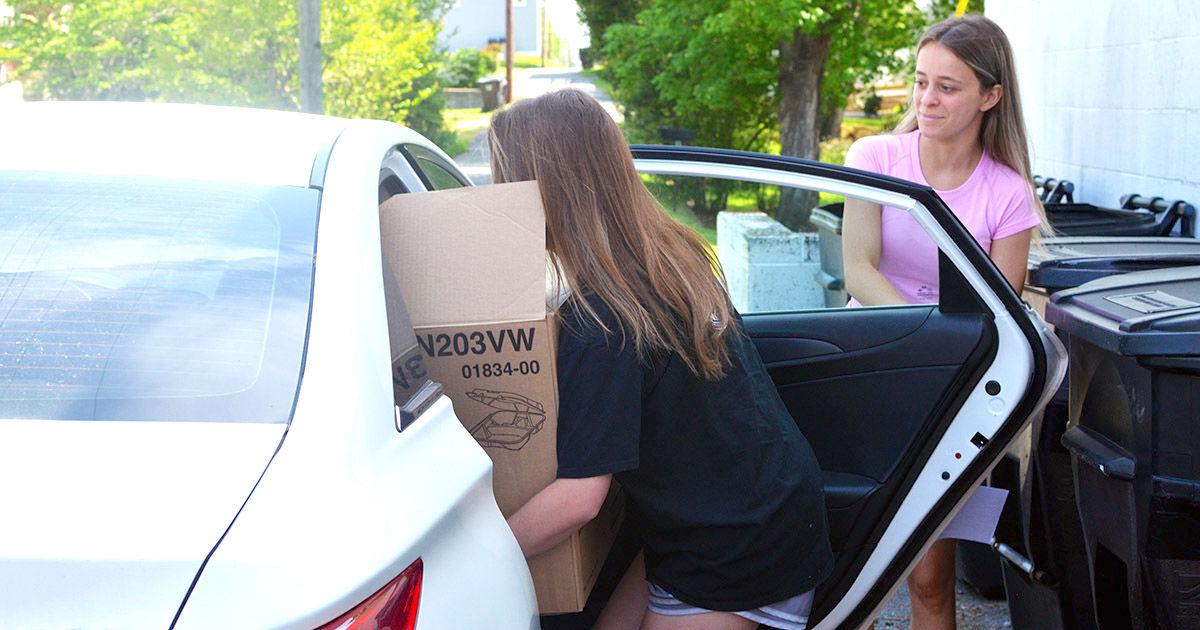 FPHS students Mia Traylor and Isabelle Wright load a car with packaged meals for delivery to area senior citizens who are unable to get out during the COVID-19 pandemic.

FPHS students Mia Traylor and Isabelle Wright load a car with packaged meals for delivery to area senior citizens who are unable to get out during the COVID-19 pandemic.

Since the end of March, Methodists and Baptists in Fort Payne have pooled their efforts to feed those in need and offer Christian fellowship to the scared and lonely.

Like most people, First United Methodist Church Director of Student Ministries Valarie Moses suddenly found herself at home with a sense of dread about how “the world stopped moving. The kids were sent home from school, and people were hoarding at the grocery store. The world had gone crazy. I could just imagine, based on how much food my son Brady was eating, how difficult is was going to be to keep people fed in such an environment. What about the people who couldn’t get out and go get food? I started thinking about cooking, then the thought occurred to me ‘Go feed people.’ I think the Lord was moving me to act. What started out as ‘Let’s just see about feeding a few people for the week’ has turned into delivering more than 3,500 meals.”

Moses said she acted partially out of a need to keep herself busy.

“If I had stayed home throughout this, I would have gone crazy. I was finishing up nursing school, but I still needed to keep busy. I knew Barry Higgins was all for it, thank God, because I don’t know how to feed the masses.”

As a chef with restaurant experience, Higgins knew how to run a kitchen and feed large groups of people so he and Moses teamed up to mobilize high school students from the church’s youth group who had their senior year interrupted.

“Our seniors had the rug pulled out from under them as life just stopped,” she said. “I talked to them to ask if they’d like to be a part of this. My youth group is seventh through twelfth grades, and some of younger kids have helped as well.”

At first, it was only going to be a one-week thing to help elderly and high-risk members inside their own church, but it worked so well that they kept doing it, delivering food to whoever was in need of a meal. Higgins said the boys have served as cooks while the girls have mostly delivered the meals, which have included chicken and dressing, hamburger steak, meatloaf, pork chops, barbecue, chicken casserole and sides.

“We’ve all joked about gaining weight down here,” Moses said.

Moses said she “wanted to be respectful of the virus” and make sure that everyone could participate safely. “I knew people would still be hungry, and we could do something. I just prayed for discernment and for God to tell me the right thing to do. That first delivery day, we returned to find a couple waiting to give our ministry a $1,000 check so we could continue doing this. I felt like that was God saying, ‘Keep feeding people’ so we’ve not stopped.”

Other churches and individuals have donated without being asked.

“As youth director at the church, I have a special fund available in memory of a student from our youth group who we lost to suicide in January.

“Blaine Smith was always helping people, and I knew that I could take from that money if I had to help people and he would’ve been proud. But we haven’t had to touch that money, and I don’t know that we will because every day, someone comes in and gives something. I’m just amazed. But there’s definitely a need in the community. So many members of the greatest generation have always been self-sufficient and won’t ask for help. It’s mainly the fact that someone is thinking about them. So many elderly folks already lived reclusive lives. This was a way of connecting and feeding people.”

The loss of Smith made Moses realize there are a lot of hurting people, including kids.

“I’ve just been more aware of the importance of trying to do something helpful,” she said. “Maybe we can give someone else hope to go on one more day so they can bless others. It’s not so much about the food as having someone to show they care about you.”

Higgins said he met with Marshall Henderson, pastor of First Baptist Church in Fort Payne, and it became a joint project. They intermingled, but generally, the Methodist youth helped to prepare the hundreds of meals while the Baptist young took on the task of delivering the meals to the people in need on Tuesdays, Thursdays and Saturdays.

Kids of all ages have created notecards with messages of love and encouragement to send with the meals. Shirley Fowler, Merle Wilson, Shannon Blanton, Sharon Jones and Gena Fowler have also sent flowers to express love.

“Every Tuesday, we sent 45 meals to Spring Grove senior apartments. That has been such a blessing to those folks. Kandi Burt, the social work there, said it has just lightened their lives,” Moses said.

“To show you how great our kids are, they’ve already asked if we can go sit down and eat lunch with the residents at Spring Grove once this is over and it’s safe,” said Higgins.

One woman, recently widowed, told the delivery girls that she had not been eating, but the meal gifted to her gave her a reason to eat.

“I just cried so much that first week. We can all do something. There’s people wanting to help, and you’ve just got to connect them together. We’ve got such a great group. We couldn’t do this without the people who have committed their time,” said Moses.

Many of the names on the delivery list are unfamiliar to Moses, but she said it’s beautiful to let a stranger know that someone cares about them. They want to help people they learn are experiencing a difficult time and have even delivered to random people.

“They say ‘We didn’t ask for this,’ and we say, ‘We know, just enjoy this,’” Moses said. “These are the times we should be the loudest and helping others.”

“It’s not a Methodist thing or a Baptist thing – it’s a community thing,” Higgins said.

The group has also donated to local police and fire departments.

“The people who’ve had to work through this, we want to show them we appreciate them getting up and going to work everyday,” he said.

At 10 a.m., the group says the blessing over the meals. They plan to keep going til the end of May, then reassess their game plan.

The rewarding aspect for Moses is realizing her purpose in life: helping people.

“When you know your purpose, you further the kingdom and show God’s love. I don’t claim to have my whole life together or be perfect. I can’t recite every book of the Bible, but I can try to be a good human and love others and let them know that God loves them. God has done great things in my life. I am a great hot mess that Jesus has put to use. I just try to be me. I love to see God at work in this world.”

Higgins said he has felt no fear throughout the process.

“I’ve not once thought ‘I don’t need to be out in this [pandemic] because we’ve got a shield around us,” Higgins said. “There are as many appreciative of the smiles on the faces of those kids as they are of the meals. It doesn’t take something big to make somebody smile. That’s the name of the game.”

To learn more about their efforts, email Moses at fumygroup@gmail.com or visit https://www.fpfumc.org/ and http://www.fbcfp.org/.

Partly cloudy in the evening with more clouds for later at night. Low 64F. Winds light and variable.

A few clouds from time to time. Low near 65F. Winds light and variable.

Partly cloudy skies during the evening will give way to cloudy skies overnight. Low 68F. Winds light and variable.