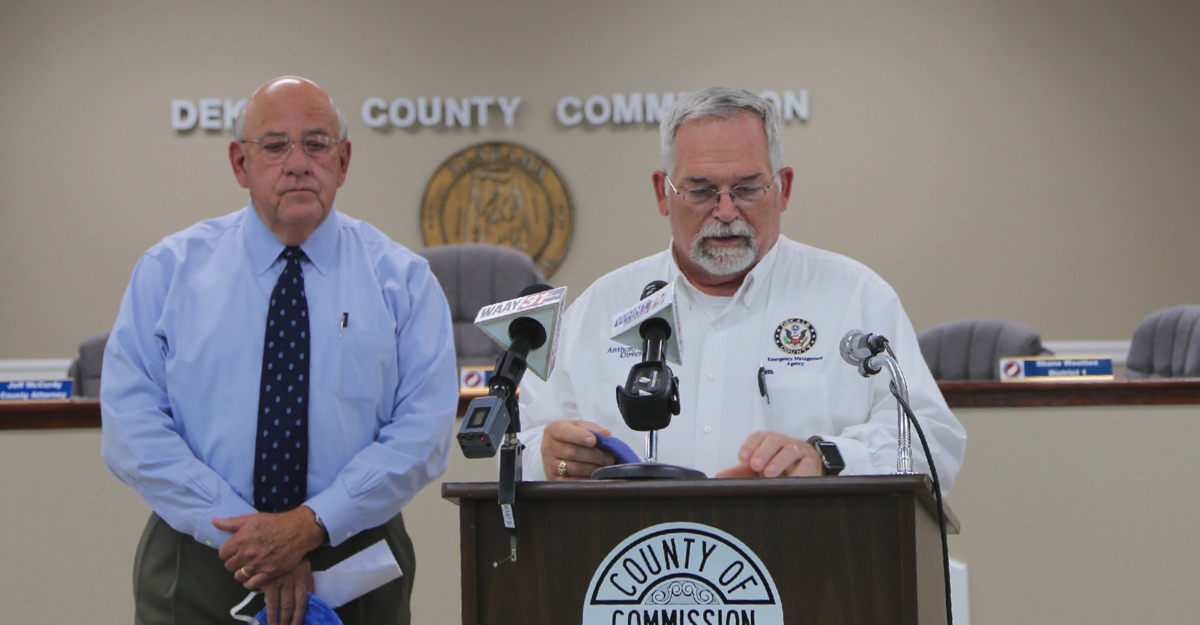 Tyler Pruett, public information officer for the sheriff’s office, said they would continue to maintain social distancing, taking reports by phone and limiting access to the office.

Tyler Pruett, public information officer for the sheriff’s office, said they would continue to maintain social distancing, taking reports by phone and limiting access to the office.

Harcrow said after speaking with other county officials, they felt adjustments needed to be made following the extension in regards to the rising numbers of positive cases.

“We are going to have to make some adjustments in the next 30 days due to schools starting,” he said.

Clifton said many people had asked why they are reverting to guidelines that were in place before June 1, 2020, after the county began to open back up.

He said this week, alone until Thursday, they have 117 new cases reported in the county.

“Again, comparing that to June 19, that's an increase of 343 percent. That's a tremendous increase and we must do something to curve this spike in numbers,” Clifton said.

He emphasized using caution and following Gov. Ivey’s orders this holiday weekend to minimize the spread of the virus as much as possible.

Clifton said one big issue they are finding is most of the cases in the age range of 20 to 40-year olds that are reported have been asymptomatic.

“Those folks are usually healthy and have good immune systems and are able to fight the virus well, but what that also means is we are going to get into the vulnerable population,” he said.

Once it starts getting into that population, Clifton said, that means an increase in hospitalization.

Regarding a mandatory mask order, Clifton said right now they don’t have one in place.

“We are taking every step to try to protect citizens' rights. We don’t want to get into a situation where we are putting law enforcement where they have to enforce an order that should be common sense,” said Clifton.

Harcrow said they are making all the necessary changes to be proactive before school starts.

“I think that's very important, and there's going to be a lot [pending] on that,” he said.

Harcrow said if the situation continues as is and cases continue to increase with no curving of spread, they will take into consideration the mandatory mask order.

DeKalb County EMA has recommended government offices remain vigilant and use all possible ways to protect both citizens and employees. As a result, the EMA recommended county offices be closed to the public designating the hours from 10 a.m. to 2 p.m. for public use.

Individuals visiting the courthouse or other county buildings are encouraged to make an appointment if possible.

Harcrow said, based on these recommendations, county offices will be open from 10 a.m. to 2 p.m. Monday through Friday starting July 6 and running through July 31. At that time, the order from the Alabama Department of Public Health and the governor’s office is expected to reevaluate.

County employees will work regular business hours, and some business will be conducted on an appointment basis with the office.

Clifton said the new hours would not affect absentee voting, which would continue from 8 a.m. to 4 p.m. at the Circuit Clerk’s Office.

“You will have to identify at the security checkpoint at the courthouse to get there that you are there to vote,” he said. Absentee voting ends Thursday, July 9, for the runoff election.

“We want to protect all our residents and must do all we can to remain within the practices called by the state health officer and the governors orders,” said Harcrow.

Clifton said DeKalb County is one of the fastest-growing positive testing areas in the state and noted that it is possible that rates may continue to rise unless residents take the Department of Public Health recommendations seriously and stop the rate of transmission of the virus.

The rate of coronavirus cases has still not plummeted down so still, we must follow all advised policies. Mostly students like to read ninja essays reviews before help in research paper online. We should not abandon wearing masks yet. All of us should support government policies to tackle this pandemic.

Scattered thunderstorms in the morning becoming more widespread in the afternoon. Potential for heavy rainfall. High 83F. Winds SSW at 5 to 10 mph. Chance of rain 80%.

Thunderstorms likely in the evening. Then a chance of scattered thunderstorms later on. Low near 70F. Winds light and variable. Chance of rain 80%.

Scattered thunderstorms in the evening with a few showers possible late. Low 63F. Winds light and variable. Chance of rain 40%.