Pictured is carving artist Lee Richards of Valley Head, along with various wood creations. Although he no longer takes part in carving competitions, these days his pieces are donated to charitable events such including those for Cystic Fibrosis. 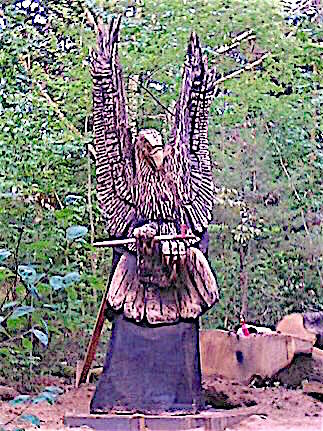 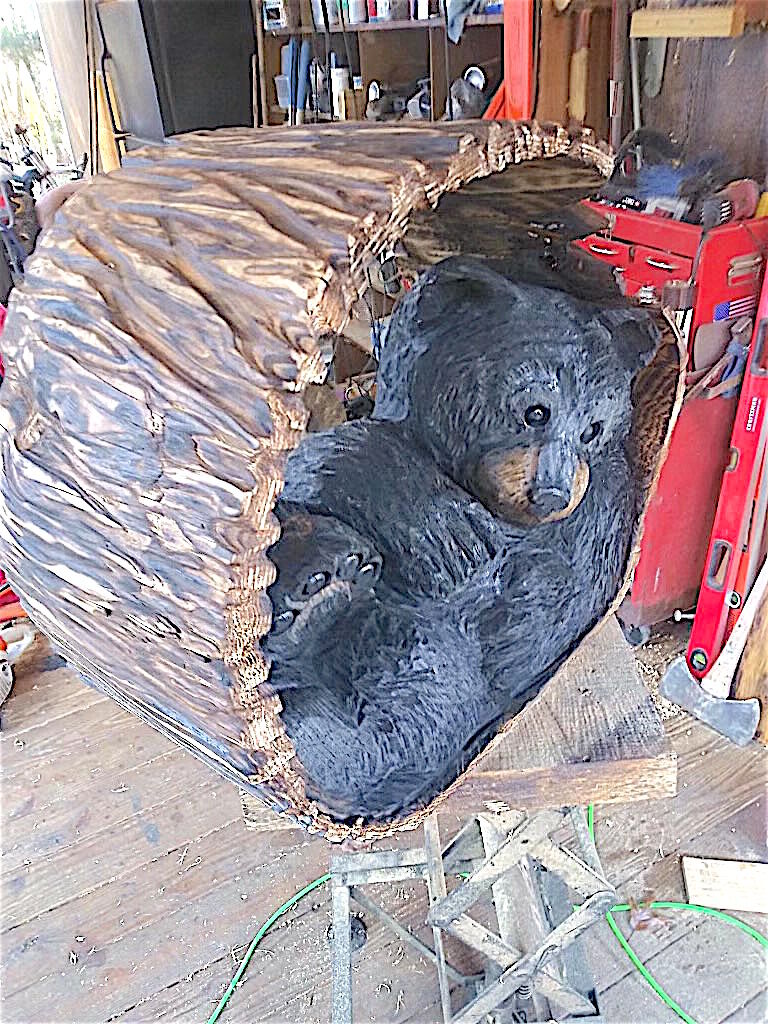 Pictured is carving artist Lee Richards of Valley Head, along with various wood creations. Although he no longer takes part in carving competitions, these days his pieces are donated to charitable events such including those for Cystic Fibrosis.

Lee Richards is a resident of Valley Head, in 2010 he became a carver. He carves wood with a chain saw and a variety of other tools to create, as realistic as possible, a statue of an animal. Within three months of learning to carve he entered his first competition and won a first-place ribbon, that launched him into competitions all around the world.

Richards said, “The whole thing began when my wife, Selina, saw a six-foot tall carved bear in Gatlinburg and wanted it.” The Richards had taken their car on the trip instead of their truck and had no way of bringing the statue home. Lee promised his wife he would bring the truck back and get it for her, but first he wanted to try his hand at making her one. “She laughed and said you’ve never cutup anything except firewood,” said Richards. “I just really felt like I could make one.”

Once Richards returned home, he asked a friend who was in the tree-trimming business if he had any large pieces of tree lying around. The friend gave him access to all the wood he would like to take. Within a week he had made Selina a bear that pleased her. They placed it on the front porch and within a short time someone stopped to ask if it was for sale. Selina knew what one in Gatlinburg cost and so asked for a reduced, but yet hefty fee. The visitor paid them and Richards went back to making another one for his wife.

Once again, they placed it on the front porch and once again someone stopped wanting to buy the statue. Richards, who owns his own trucking company got into the part-time carving business by accident once word of mouth advertised his newly found talent. He named his business “Ten Bears.” Originally it took him a full day to complete a smaller three-foot sized carving, he graduated up to being able to produce a dozen per day. The artistic side of Richards had him making carvings like bobcats with a squirrel in its mouth and other original pieces, but he said people seem to just like bears and eagles so he stuck to making what his customers wanted.

“It was definitely a learning curve,” Richards said. “I learned about the tools the long-time carvers used as I walked around at the competitions and about what types of wood that are easiest to carve. I also learned not to paint the carvings, but instead to stain them. They look more authentic that way and last longer in the weather.”

Richards credits his ability to being able to learn this craft so readily to his ability to draw. He said he also watched YouTube videos for tricks of the trade. “I like teaching myself to do things,” Richards said. “I taught myself to play guitar and I built my own home. It’s just how my mind works.”

He no longer competes in carving, but these days he donates his carvings to charitable events such as Cystic Fibrosis. Follow on Facebook under Ten Bears.