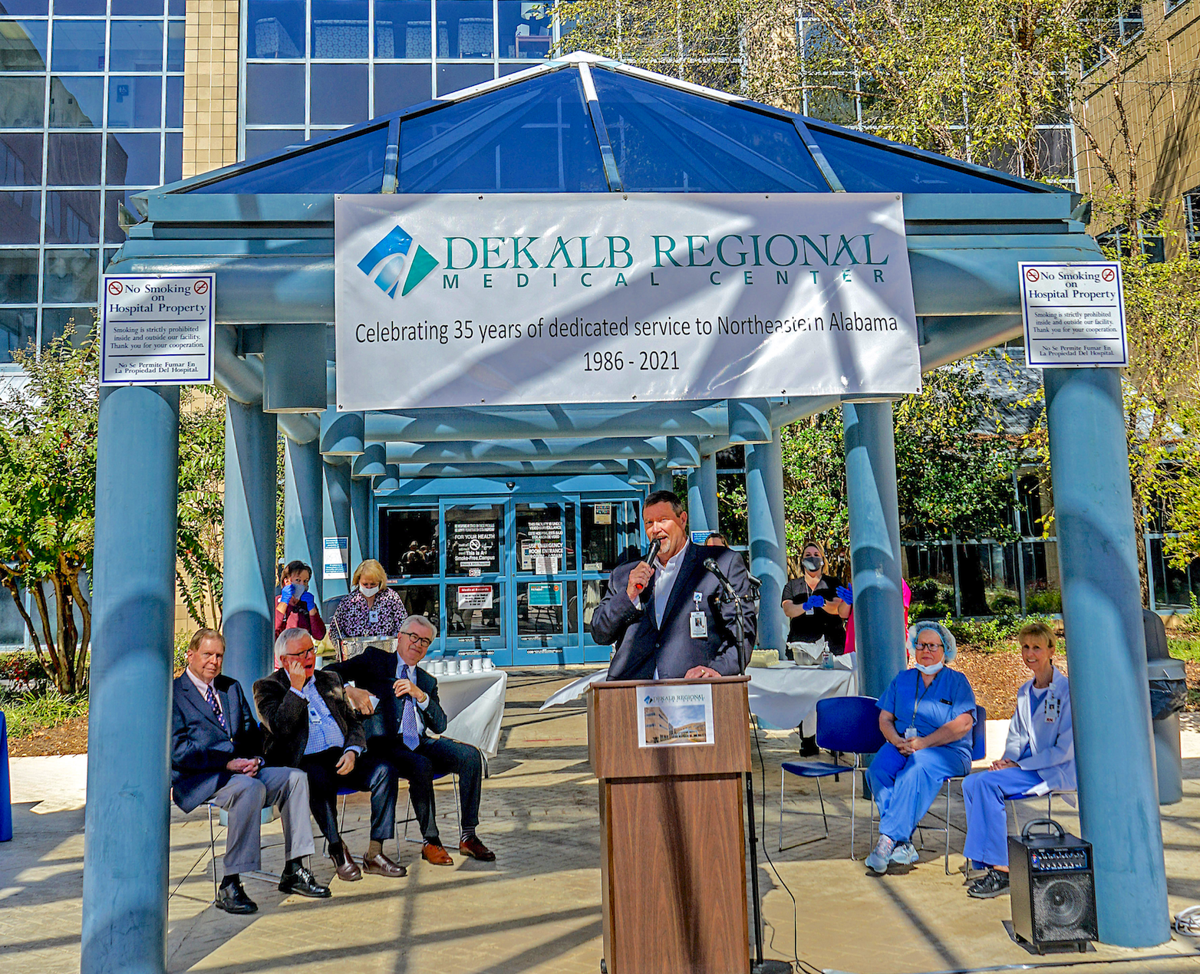 DeKalb Regional Medical Center Interim CEO Bob Moore speaks at the podium during an event to mark 35 years since the hospital moved to the 37-acre campus off Alabama Highway 35. 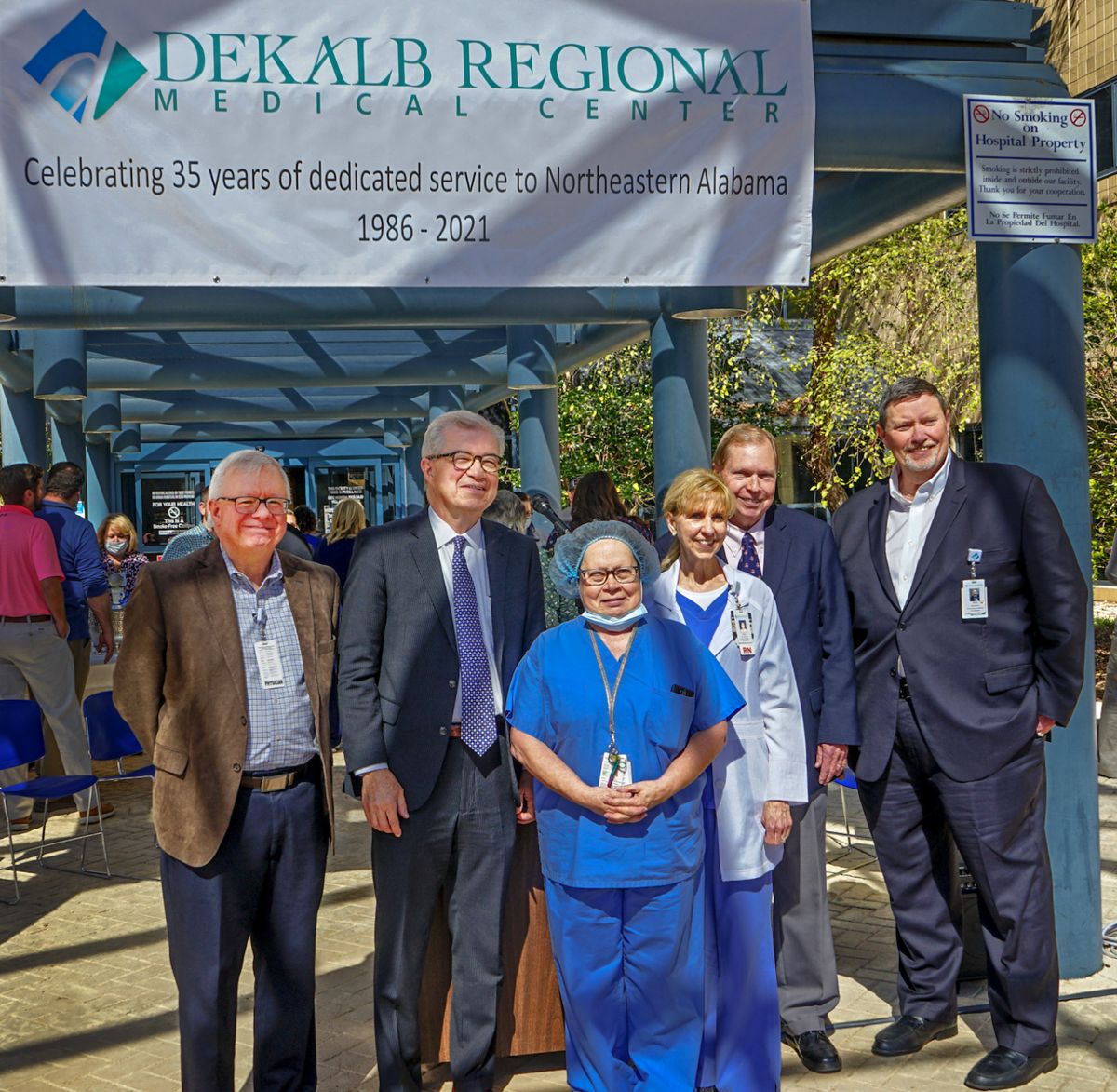 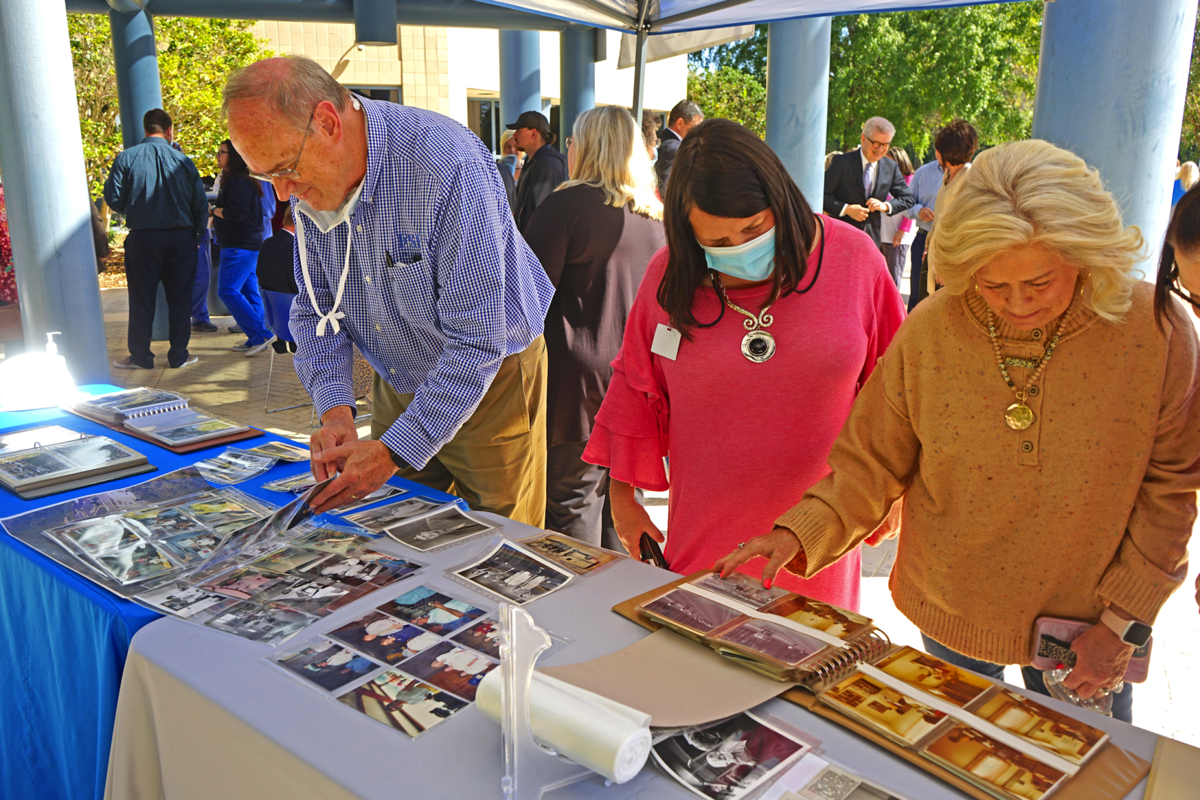 DeKalb Regional Medical Center Interim CEO Bob Moore speaks at the podium during an event to mark 35 years since the hospital moved to the 37-acre campus off Alabama Highway 35.

DeKalb Regional Medical Center celebrated it 35th anniversary at a ceremony on Oct. 19.

DRMC replaced the 99,000 square foot DeKalb General Hospital, which had 114 beds and operated from 1951-86, itself replacing the Killian-Weatherly and Guest clinics. It is being demolished.

“As the old hospital is coming down, this new hospital continues to grow stronger,” said Interim Chief Executive Officer Bob Moore. During the groundbreaking in 1983, the cost of building a new hospital was $29 million. Today’s equivalent investment would be about $150 million.

On October 19, 1986, DeKalb opened its door to the new three-story, 138,000 square foot building located on a 37-acre campus at 200 Medical Center Drive. Since then, the hospital has experienced growth in services and technology with more than 75,000 patients per year receiving emergency, inpatient and outpatient care. It is a Blue Cross Blue Shield of Alabama Tier 1 facility, accredited chest pain center and a primary stroke center, receiving the Stroke Silver Plus quality achievement award.

“We’ve seen significant growth through the years, particularly in the area of women’s and children’s services,” Moore said, noting that more than 600 babies are born each year at the Kelly Owen Women’s and Children’s Pavilion.

DRMC now employs 500 and has more than 100 members on the medical staff.

“I’m very proud of the team here. The last 18 months have not been pleasant, and health care will never be the same as it was prior to the pandemic,” Moore said. “As a result, we’ve learned to do things differently. We’ve learned stresses that we didn’t know we had. We had nursing and respiratory therapy shortages. I’m happy to say there are now very few cases [of COVID-19] and I hope that continues.”

“This day 35 years ago, I remember it was a Sunday. It was a Herculean effort to move. Our dad did the first operation in this hospital and delivered the first baby. We were happy to have a fair amount of new equipment and all brand new rooms. My biggest memory is of the people who come together to make places like this happen. You grow where you are planted, and we were happy to bloom in fresh soil in which to grow,” Isbell said. “This community cares for its citizens and treats them well, with respect, no matter their background or their ability to pay.”

Medical Chief of Staff Dr. Daniel Mince also spoke, as well as former Chief Nurse Alice Parker. Mince recited a list of doctors who were on staff during the transition between hospitals said he was thankful for the specialties and new services added,” Mince said.

Parker, who’s been with the hospital since 1975, was director of the ICU in 1986 and recalled the team and community coming together for a smooth transition.

“We couldn’t have done it without help from DeKalb Ambulance Service and the local rescue squads,” Parker said. “Our local newspaper made sure people knew that our emergency room would be open on certain days while the old ER would only be used for stabilizing patients. We had to staff two hospitals that day and tried to transport patients every 15 minutes. The nurse traveled one-on-one with the critical patients. There was a final sweep of the old hospital to make sure we hadn’t left anyone behind.”

They were joined by 51-year surgical nurse Kathy Hunt and Dr. Pat McFadden, the pastor emeritus of First Baptist Church who said he’d walked the halls of the hospital many times counseling people in their time of need.

To learn more about the hospital, visit https://www.dekalbregional.com/.