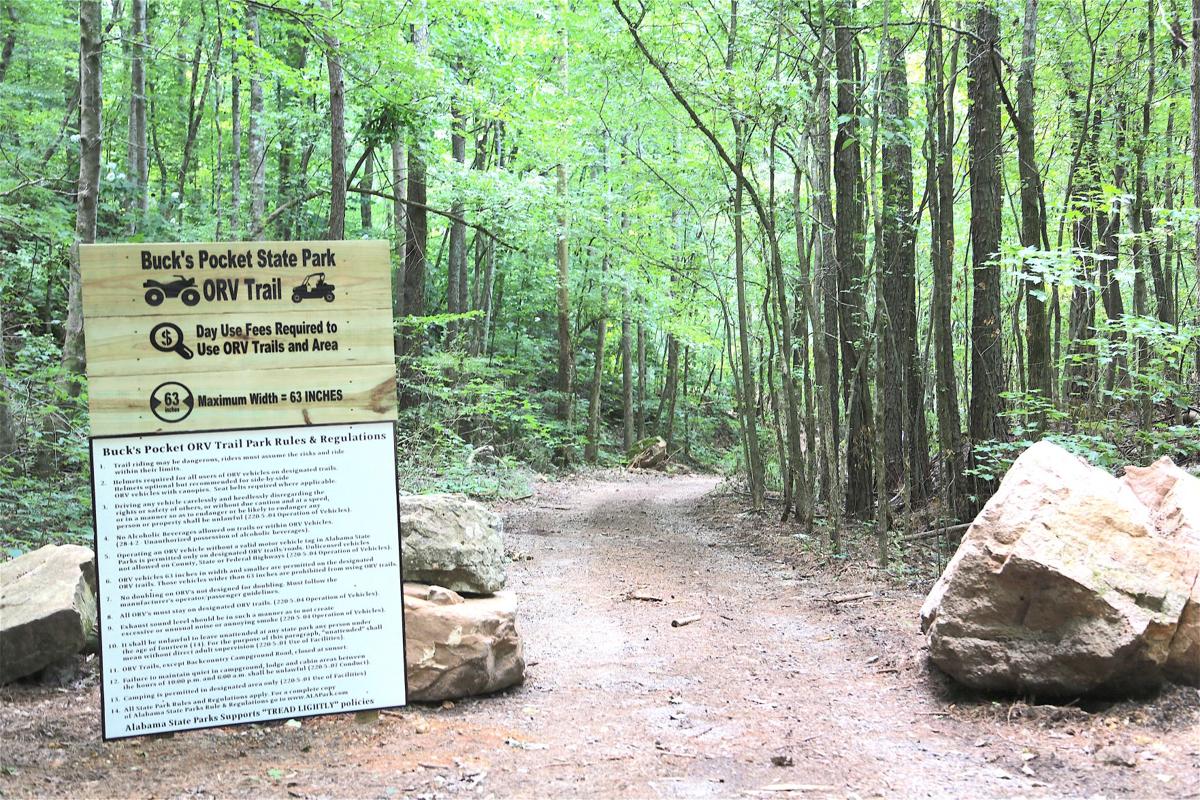 The district superintendent of Northeast District for Alabama State Parks said the park campgrounds were closed on November 15, 2015.

According to officials, the closing came during the lack of funding that caused financial problems for the Alabama State Parks after money was taken from the parks to use in the general funds.

Alabama State Parks System Director Greg Lein said for many of the staff, the reopening of the park is a celebration of something special and dear to their hearts. “It’s breathing life back into this park,” he said.

Lien said the Alabama State Parks System has various big parks like Lake Guntersville, but they also have small parks like Buck’s Pocket, and they are all equally important to them.

Lien credited Rob Grant, deputy director in the Alabama State Parks System, for convincing him they could do something different in the state parks and writing all the grants to make it happen.

Grant initiated the idea of the parks hosting the off-road vehicle community.

“I am grateful every day that I listened to Rob and we took that step. It’s very exciting that we are now going to be doing something that we’ve never done before in the state park system,” said Lien.

The park was awarded a $652,000 grant for the construction of the ORV trails and performing much-needed upgrades to the facilities.

Buck’s Pocket State Park newly unveiled ORV trail features 8 miles of UTV and ATV trails running through the mountains and along South Sauty Creek, which can also be used for bikes and hiking.

The start of the trail is located across from the campground entrance and does not allow full-size vehicles such as Jeeps, trucks or rock crawlers.

The new ORV trail is the first of its kind for the Alabama State Parks, as Lien stated, and is a different approach by the parks system.

Alabama State Parks North Region Operations and Maintenance Supervisor Tim Haney also referred to as the “Godfather of State Parks,” said they not only receive grants for the trails but also for some trail equipment.

He spoke on what a huge deal it was for the park to have city water running that was made possible by the Waterworks Board of Section and Dutton. He also thanked Ladd Environmental Consultants, Inc, who oversaw the engineering aspect of the project.

“People often ask me how can we help your parks? The best way to help our parks is to use them,” said Haney.

He said the money visitors spend in the parks, whether on the trails or camping, stays in the park and helps fund it.

The renovated campground features 23 RV campsites, with water, WiFi, a 20amp, 30amp and 20amp power. The sites have oversized concrete pads providing easy access to each campsite, and 14 of the 23 feature a sewer hook-up. All of the heavily shaded campsites also feature new grills, fire-ring and picnic tables.

Along with the 23 RV campsites, there are 11 primitive campsites within the interior of the campground.

Commissioner of the Alabama Department of Conservation and Natural Resources Chris Blankenship addressed the crowd on Monday acknowledging and thanking various representatives and leaders who were present, including House Majority Leader Rep. Nathaniel Ledbetter and Dist. 8 State Sen. Steven Livingston.

Blankenship said when he was appointed commissioner in 2017, Buck’s Pocket was not operational but he visited the park to see what used to be there, what could be there again and what this part of the state had to offer.

A group of 29 volunteers from A Year to Volunteer organization donated their talents and time since early May to refurbish the outdated children’s playground, renovated the park office and provided aid with ongoing campground renovations.

According to alapark.com, the Alabama State Parks Division operates and maintains 21 state parks encompassing approximately 48,000 acres of land and water in Alabama. The park ranges from Gulf Coast beaches to the Appalachian Mountains and provides opportunities and facilities from basic day-use activities to resort convention lodging, restaurants and golfing areas.

Buck’s Pocket State Park rates and fees are as follows:

• Day use hiking and walking trail pass access - $5 per car

How to make camping reservations:

• Reservations are taken within the park office (256-659-6288) during normal business hours. Reservations must be secured with payment for the first night's stay, plus taxes, and will be charged when reservations are made.

• After hours check-in can occupy an empty site and register the following day at the park office by 10 am.

• Specific campsites and type will be chosen at the time of check in.

• All charges are payable by cash or credit (Visa, MasterCard, Discover, and American Express), no checks.

• Cancellations must be made 72 hours prior to arrival for deposit refund. Not applicable on group or convention reservations. Two night minimum during season (March 1 - October 31) Three night minimum is required for Memorial Day, 4th of July and Labor Day

• Minimum age to rent a site is 18. A responsible adult must check in and occupy the site during the entire reservation.

• One extra tent is allowed on a site only for children under the age of 18 yrs. There will be an additional charge of $5.00 per night plus tax for the 2nd tent.

• Limit of eight persons per site - two ORV's and trailer.

Reservations for the Buck’s Pocket campground can be made by calling 256-659-6288. For additional updates and information, visit www.alapark.com/parks/buck-pocket-state-park.

– Editor’s note: An in-depth story is being developed by staff writer Cinthia Rico and will appear in an upcoming edition of the DeKalb Living Magazine.

Scattered thunderstorms. High near 80F. Winds WSW at 5 to 10 mph. Chance of rain 60%. Rainfall may reach one inch.

Partly to mostly cloudy skies with scattered thunderstorms during the evening. Low 64F. Winds light and variable. Chance of rain 50%.

Partly to mostly cloudy skies with scattered thunderstorms during the evening. Low 64F. Winds light and variable. Chance of rain 50%.