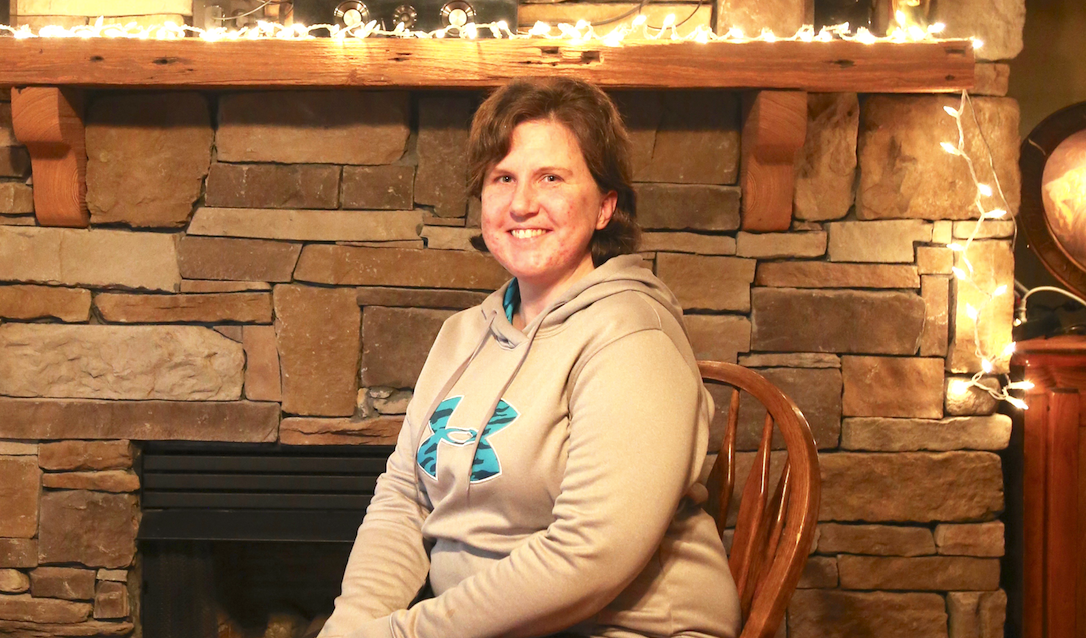 Pictured above, Kim Payne who is described by her family as a loving mother and wife. 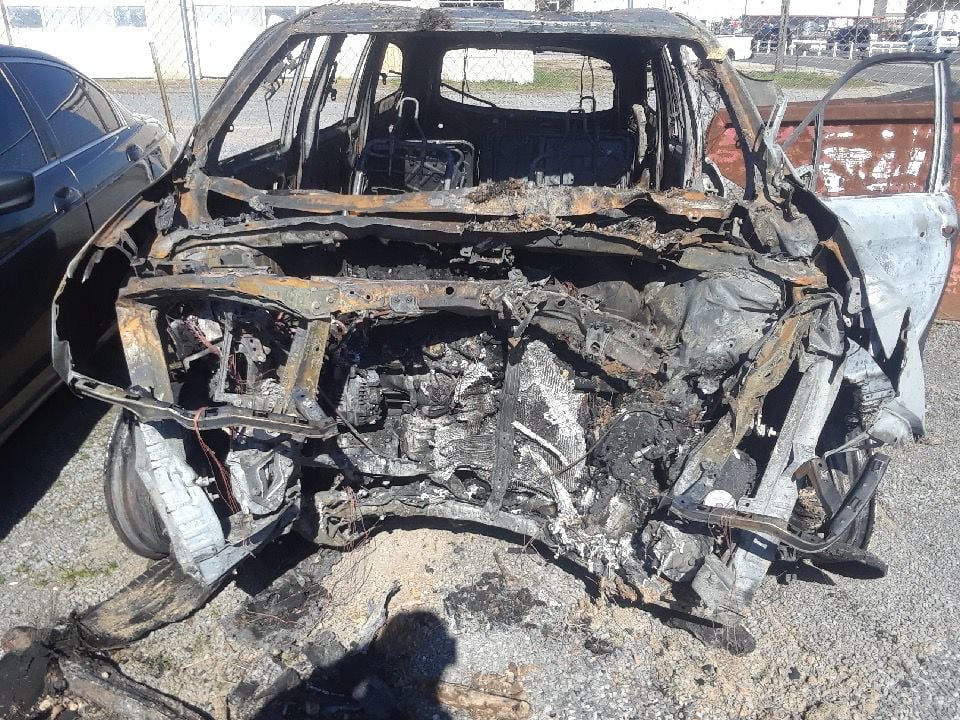 Pictured, above, is Kim Payne's vehicle after the accident. 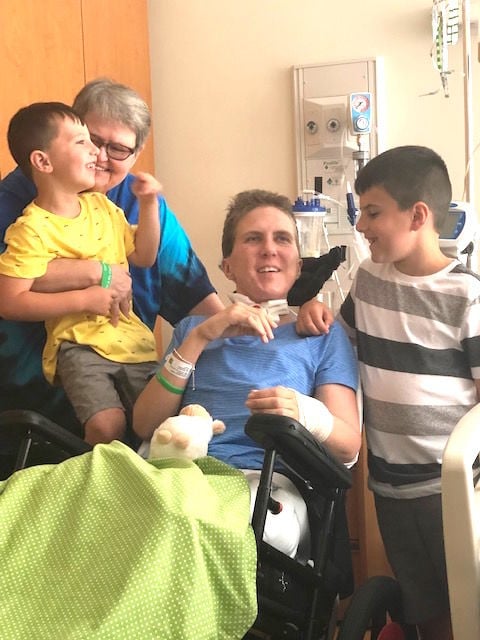 Pictured, above, is Kim Payne with her two sons and her mother Kathy Pritchett at the hospital. 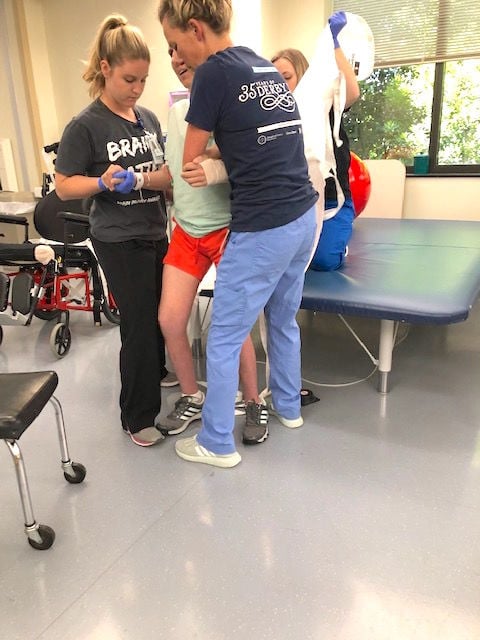 Pictured is Kim Payne standing up during a therapy session. 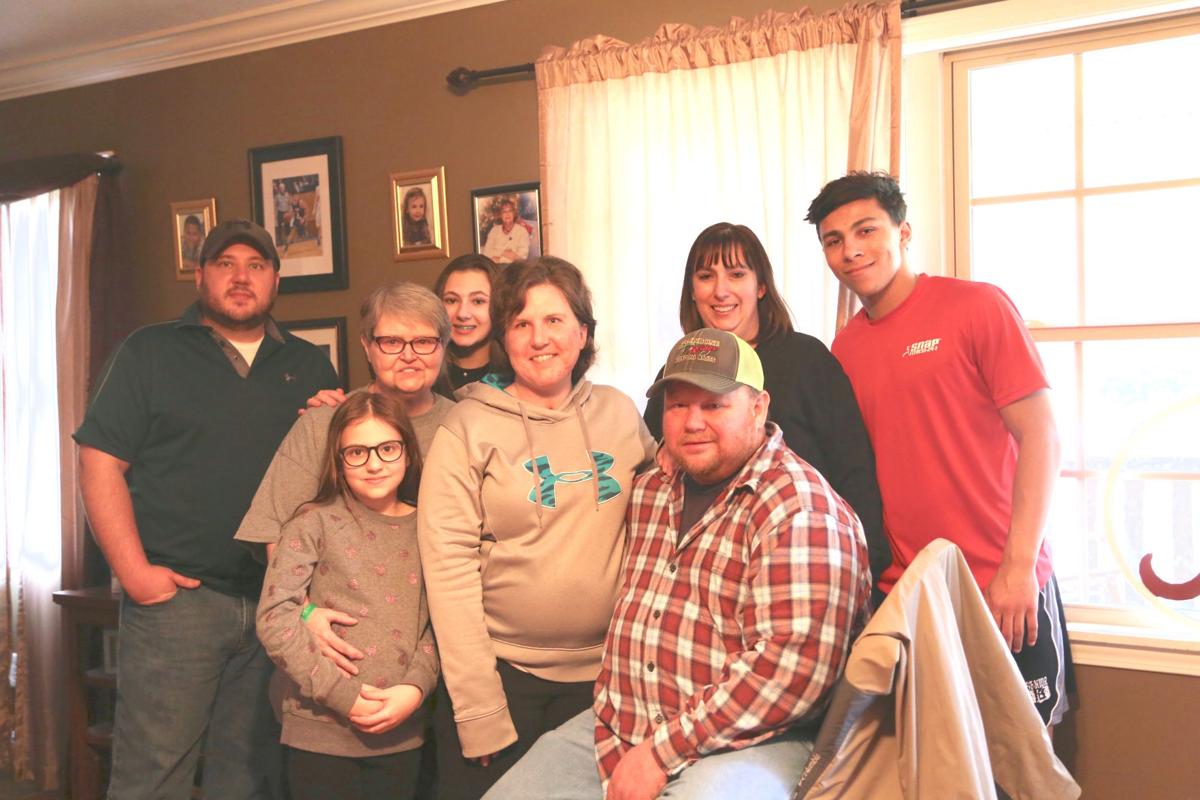 Pictured above, Kim Payne who is described by her family as a loving mother and wife.

Pictured, above, is Kim Payne's vehicle after the accident.

Pictured, above, is Kim Payne with her two sons and her mother Kathy Pritchett at the hospital.

Pictured is Kim Payne standing up during a therapy session.

One year ago today, DeKalb resident Kim Payne was involved in a car wreck on her way home. On March 17, 2019, her vehicle veered off the road, impacting with a tree head-on and igniting in flames shortly after.

Payne’s sister-in-law, Abbie Pritchett, recalls the moment her nephew came running in the house after witnessing the crash.

“He was hollering that his mom had been in a wreck, and by the time I got there, she was already out of the vehicle on the back of Craig’s vehicle,” said Pritchett.

Craig Hall serves as Hammondville’s fire chief and was recognized for his act of heroism by Susan Akes, mayor of Hammondville, last October.

Hall said he was working in the shop when the page came through.

“When I got there, the outside door wouldn’t open. I reached my hand in to open the door, and at this time, the right front side was already burning,” he said.

Hall was able to pull Payne from her vehicle without her sustaining any burns.

He said the tires then started popping. The vehicle was already hot and “another five minutes and it wouldn’t have been good at all,” said Hall.

Pritchett said Payne was unconscious and had three open areas on her right leg where the bone had come through, including multiple cuts and lacerations.

Payne was transferred to DeKalb Regional Medical Center for a quick assessment before being airlifted to Huntsville Hospital.

“She had multiple seizures on the way to Huntsville and after a quick assessment, they had to do surgery to relieve pressure on one side of her brain. It was not looking good,” said Pritchett.

Among her injuries, Payne has suffered a traumatic brain injury, crushed pelvis, broken leg, strokes and a bruised lung.

“Three weeks in, she got what is called an Acute Respiratory Distress Syndrome and very few people recover from that,” said Pritchett.

Payne was placed in a RotoProne bed. According to ardsglobal.org, the bed facilitates easing the patient onto their stomach and also swings the patient into a 120-degree arc to help move accumulated fluid in the lungs.

Pritchett said before they could operate on Payne's leg, they had to wait for the swelling to decrease. “She has a rod from her hip to her knee,” she said.

The family was eventually told Payne wasn’t going to make it, and if she lived, she would have to live in a facility that would allow her to be on a ventilator because she would have to have help breathing for the rest of her life and would require to be on a feeding tube.

“They said she would be paralyzed completely on the entire right side of her body and would be blind on that side. Long story short, she would never come home and eat dinner with her family ever again,” said Pritchett.

Two weeks later, the family was called in to decide Payne’s future.

“We had had multiple prayers, but at that point, we just all started praying. People were starting to reach out from other states like Tennessee and California,” Pritchett said.

She said a coworker had family praying in Mexico, and there were also people praying in India and a coworker's parents who visited Jerusalem placed Kim’s name on the Wester Wall also known as the “wall of prayer.”

“But after all that happened, Kim started moving her right hand and then she opened her eyes and smiled for the first time,” said Pritchett.

During Payne’s stay in Huntsville, she was regularly visited by Rev. Taylor Gallman of Asbury United Methodist Church.

“He probably came three or four times a week and was there. We really enjoyed his presence. He prayed with us and brought us food, and if we didn’t want to talk, he sat with us and we just really thought that was special,” Pritchett said.

Around mid April, Payne was transferred to Kindred Health and Rehab in Chattanooga, Tennessee. and by the first week of May, she began weaning off the ventilator.

On May 15, Payne reached a new milestone; she said her first words since the accident.

“She looked at her mama and said she loved her,” Pritchett said.

Sooner after, Payne was accepted into Shepherds Rehab in Atlanta. She began doing physical, occupation and speech therapy an hour a day.

“By May 19, Kim started to put together sentences for the first time. They wouldn’t always make sense but she was able to say some things,” said Pritchett.

As her progress continued, she was able to stand for the first time since her accident. She fed herself and was able to use the bathroom by herself by the end of that month.

Although she still had her feeding tube, she was eating three meals a day, and by June 4, her trach was removed.

On June 18, family and friends waited for Payne's arrival home with decorative signs and balloons as they lined the side of the road.

“When Kim came home, she was able to get out of the car and walk in the house with a walker,” Pritchett said.

Once at home, Payne was seen by Home Health with Amedisys, who worked with her for eight weeks.

Currently, Payne is on a break from therapy but said she is still doing home therapy on her own.

Pritchett credits Kathy Pritchett, Payne's mother, with caring for her throughout her battle and recovery.

“Kathy has been with her since the accident and stayed with her from March 17 until she came home on July 18 and has solely taken care of her by herself since then,” she said.

Payne’s brother Zack Pritchett, has been a constant supporter of her journey, staying by her side as much as he could while she was hospitalized and visiting every other weekend when she was in Atlanta.

He said the family wanted to thank everyone for all the prayers and support.

“I really think the prayers are the only reason she is still here,” said Zack Pritchett.

He said Payne has been making steady improvements, and they are proud of her.

The family said they would like to convey the message that although Payne was “pretty much gone,” it is through prayers, faith and god that she’s alive.

“She is a miracle, and God is real,” Abbie Prichett said.

She said Payne is taking the time to finish healing and the process could take a few years. It can take up to three years to heal from a brain injury and return to the capacity that you were at before the injury.

“We believe God still has a plan for Kim and her work is not done,” she said.

Payne expressed her thanks for everybody's support and prayers through her battle.

“That’s the only reason I am still here,” she said.

Regarding her leg injuries Payne continues to make progress.

“Sometimes it’s hard for me to bend but it seems to be a lot better than what it was,” said Payne.

She said before she couldn't even get up or stand up however the right side of her body gives her some difficulty.

Kathy Pritchett said since Payne has come home from therapy, she and her whole family have been attending church at Asbury almost every Sunday.

As Payne continues to recover, her family celebrates every milestone she accomplishes, providing support and encouragement along the way.

“God has a plan for her and she’s going to do something great,” said Abbie Pritchett.

Except for a few afternoon clouds, mainly sunny. High 57F. Winds WSW at 5 to 10 mph.