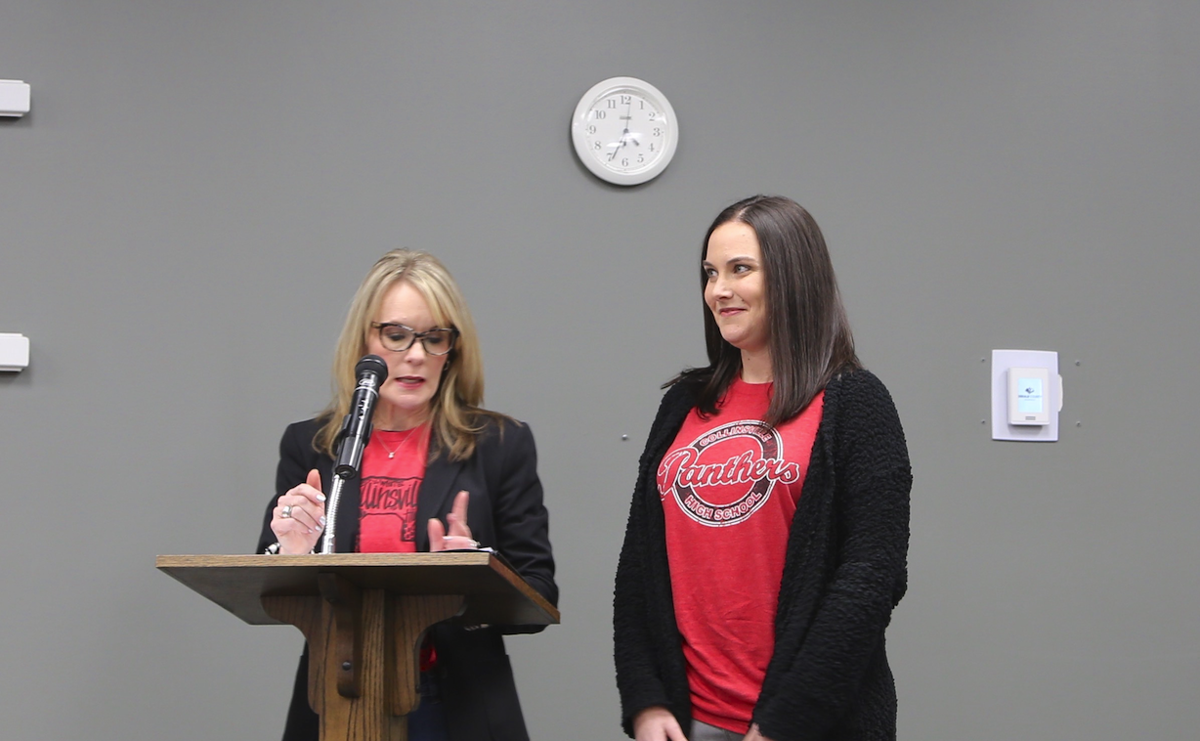 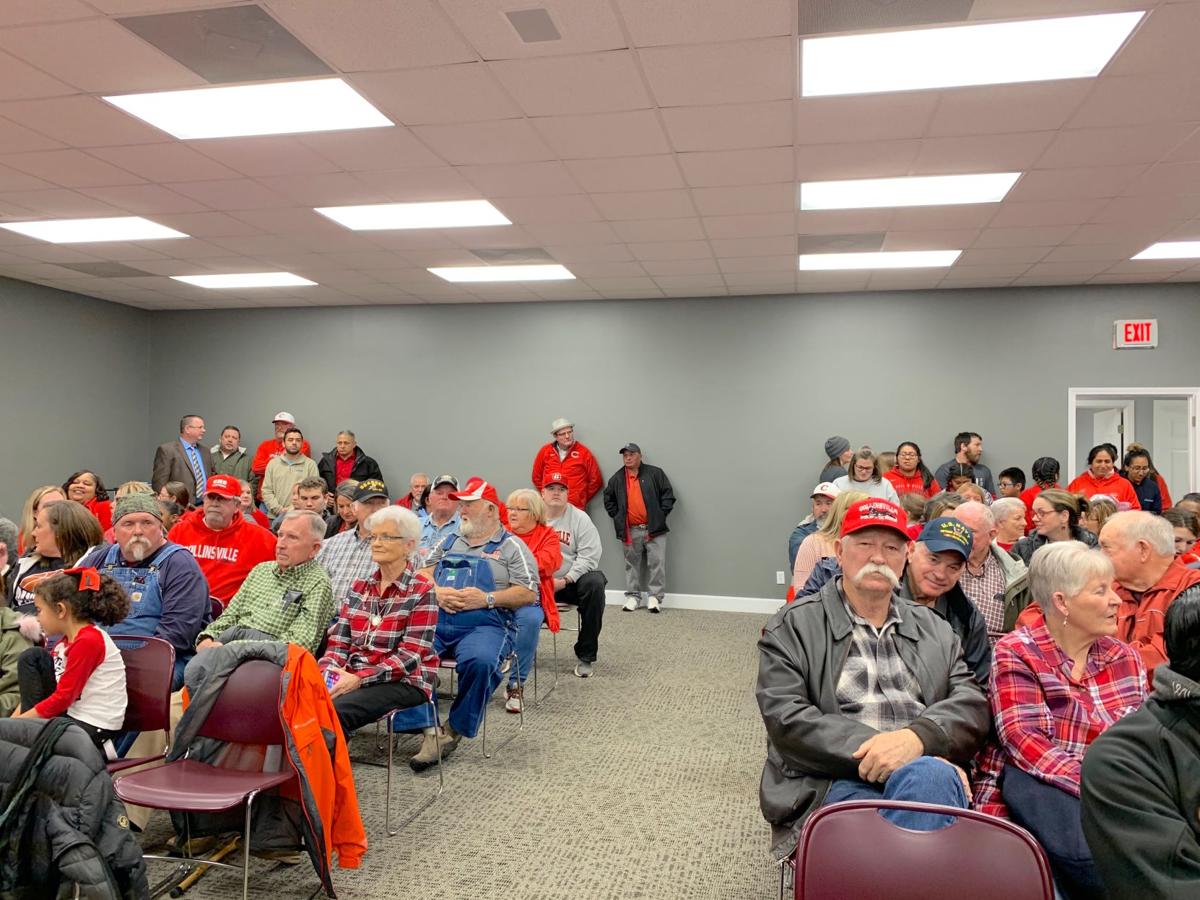 DeKalb County Board of Education welcomed the Collinsville community, school and spokespersons Monica Dennis and Libba Peek to its meeting Thursday.

Dennis, a Collinsville High School alumni and spokesperson, addressed the board and said, “we are here representing Collinsville and we have some items we would like to discuss with you.”

Dennis said CHS has recently been moved to a 3A school and their school is one of the fastest-growing schools in the county.

“We have almost doubled in size over the last few years. Our growth requires a larger facility to provide the best educational experience for our children, and we believe we are entitled to the same as all the other schools in the county. Not better, not worse but same,” she said.

Dennis and Peek brought up the following points of interest and concerns to the board:

• The construction of a new Ag/Home Ec building

• Air conditioning in the varsity gym

• The Alumni Hall, also known as the old gym, repairs

• Construction of a new gym

• Implementation of a music program and band

Regarding the construction of a new Ag/Home Ec building, Dennis said they understand some plans have been provided but inquired if there was a schedule for those plans.

DeKalb County Superintendent Jason Barnett said at this point in time they have to meet with the architect multiple times and the construction management arm that’s “handling that.”

“We are moving at a new pace, and I do know that some of the preliminary approval documents are in Montgomery at the Alabama Building Commission,” he said.

Barnett said there is not a specific time frame because they are working with the ABC but anticipates within the next couple of months they would be advertising a bid.

“The next item is air conditioning in our varsity gym. I think we are one of two schools in the county who don’t have that,” said Dennis.

Barnett said the air conditioning situation was something they had hoped to have done last summer, but there were issues with getting some multiphase power motor running and that was part of the hold-up.

He said it was something he would have “loved” to have seen happened last year but didn’t.

Board member Mark Richards said they had hired an AC Vac person who is capable of doing the work needed.

“That’s what he did for Geraldine and Sylvania [high schools]. The maintenance department did that ourselves, so that’s something I feel like we could do at Collinsville, too,” he said.

Dennis asked the board if the issue would be resolved this summer.

“Not saying by this summer, but probably during the summer, that would be the plan,” said Barnett.

CHS PTO member Libba Peek brought up the issue of repairs to the Alumni Hall, also known as the old gym.

“Currently the Alumni Hall, what we referred to as the old gym, was built in 1930 and is in dire need of repairs,” she said.

According to Peek, the roof is leaking and has been for many years, the floor is rotting due to the leaking roof and there is what appears to be mole growing in the walls of the basement that is used to teach health class and is an “extremely unsafe environment” for the children.

“Our junior high, junior varsity and varsity volleyball teams are all scheduled to host the Volleyball County Tournament next fall, but without two full courts, that would be impossible to do at our school,” she said.

Peek said she was told in an email in October of 2018 that quotes for repairs had been received and a resolution was being worked on.

“It’s our understanding that now an architect and the [Alabama] Building Commission have become involved with this project, and we would just like to know when it’s going to be fixed,” she said.

Barnett said in October of 2018, the board received the bids and had awarded the contract to a company and given the go-ahead to begin the job. Still, when the company delivered the material for repairs upon arriving on campus, the state inspector came in and said, “if you bring any more materials, we will shut the job down. You can’t touch this building.”

He said they then had to go through the building commission.

“Most people haven’t had the opportunity to work directly with the Alabama Building Commission, but it is a beast, it’s a burden.”

“The cost that we received was right at 10 times what it was going to cost to repair the building,” said Barnett.

He said in the December 10, 2019 board of education meeting, they received the bids and the board approved the project.

“I got word last Friday that the final signature had to be signed off on in Montgomery,” said Barnett.

Richards asked Barnett how much extra they were going to have to pay because the building commission got involved, to let the crowd know.

Dennis said it was her understanding there had been money allocated for the project for about $150,000 dollars.

Board member Monty Darwin said the total bid was $179,000 and was higher than the original bid before they had to go through the Alabama Building Commission.

Dennis informed the board the leaking roof, rotting floor and now the mold are things that will have to be addressed once the roof is fixed.

Chairman Randy Peppers reminded attendees they had redone the walls on the back last year and there had been a lot of money put into it.

“I know many of y’all don’t want to hear this, but just how much do you keep putting into it? And I know a lot of people want to keep that gym up,” he said.

Dennis took that opportunity to bring up the construction of a new gym for CHS.

Barnett said that was a question he wishes he could provide a firm answer to. He said the legislative session is coming up on February 4, 2020, and it was his understanding and hope that there would be a capital improvement bond issue for public education.

He said if that happens and depending on how much those funds are, they would be able to work on something, “there’s a lot of factors at play.”

Barnett said there are two schools that most people would say haven’t had a new gym – Collinsville and Ider high schools – and it would be ideal to do them both at the same time.

“The last gym that was built in DeKalb County was completed five years ago at Crossville, and it cost over $3.1 million to do, compared to what we get as an entire system for capital improvement from the state per year that is relatively $1.6 [million] to $1.7 [million] that’s almost two years of our money to do that without a bond,” he said.

Dennis asked if he encouraged contacting our legislator and representatives.

“I will say that I am optimistic that the legislator will see the needs of not just our system but systems across the state that are struggling to do the things they need and take a whole risk of approaches,” he said.

Barnett said when bonds are distributed to the public school, they also involve post-secondary and four-year college systems. He said Alabama has two major universities that have a lot of say and influence.

The three final items brought forth to the board were the issue of handicap accessibility, the replacement of bleachers and the incorporation of a music program and band.

Dennis said there are still some doors on their campus that are not up to standards and asked the whole campus to be inspected to check their school complied with the Americans with Disability Standards.

“We have at least one student who isn’t able to turn those knobs herself. When new doors were purchased and installed in the elementary building, our school’s alumni association through donations from individuals in our community and graduates from our school, purchased the leaver type ADA compliant handles,” she said.

Barnett said there was no issue with having the campus inspected and said the board helped pay for some of the new doors that were installed. He also thanked the CHS Alumni for their help and support and spoke of the collective effort between all parties involved.

Regarding the bleachers, Barnett said they were inspected three years ago county-wide for potential risk and safety codes. If any were determined unsatisfactory at the time, they were torn down and replaced.

He said he did not mind having somebody come out and look at them.

Peek said as a community they believe that a music program and band are essential for the success of students at CHS because not every student is an athlete, but every student deserves the opportunity to be involved.

According to Peek, in September of 2015, it was discussed that funds would be “checked into” to start a band at Collinsville School and they have also “heard lately” that a grant has been applied for.

Barnett said the grant had been applied for, but they have not received word yet. He said last year he met with band directors around the county regarding the band program in CHS.

He said although there has been some effort in the past, they are interested in going another round, and CHS would need someone with experience to build the program back up.