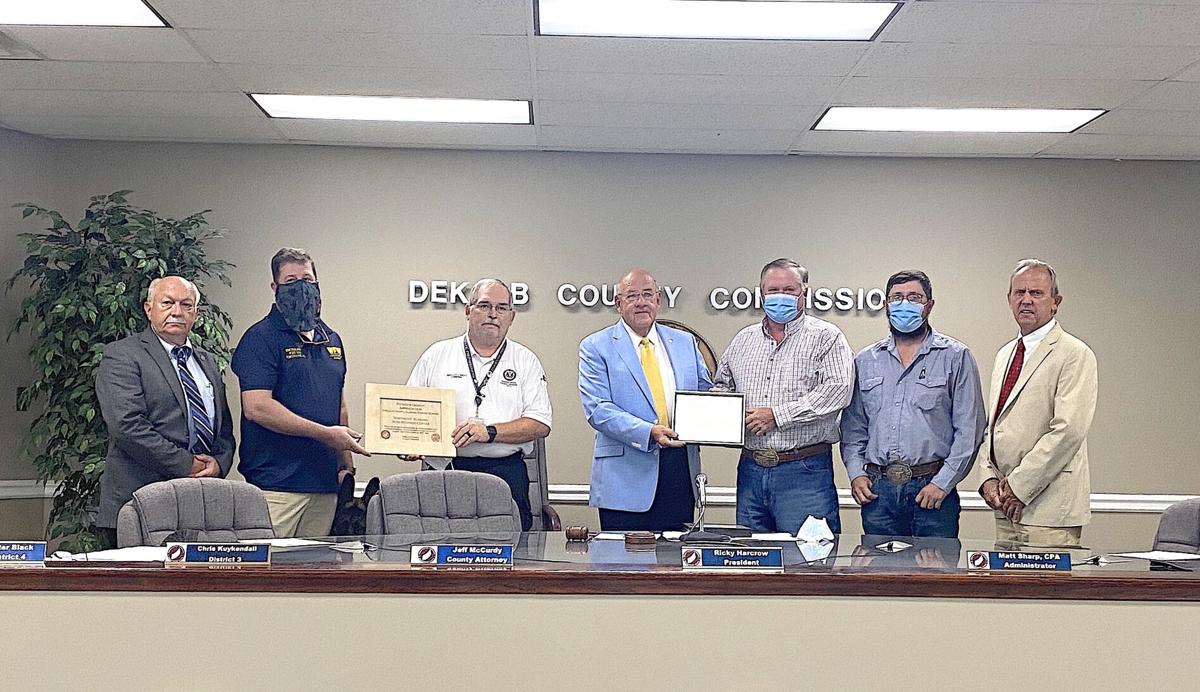 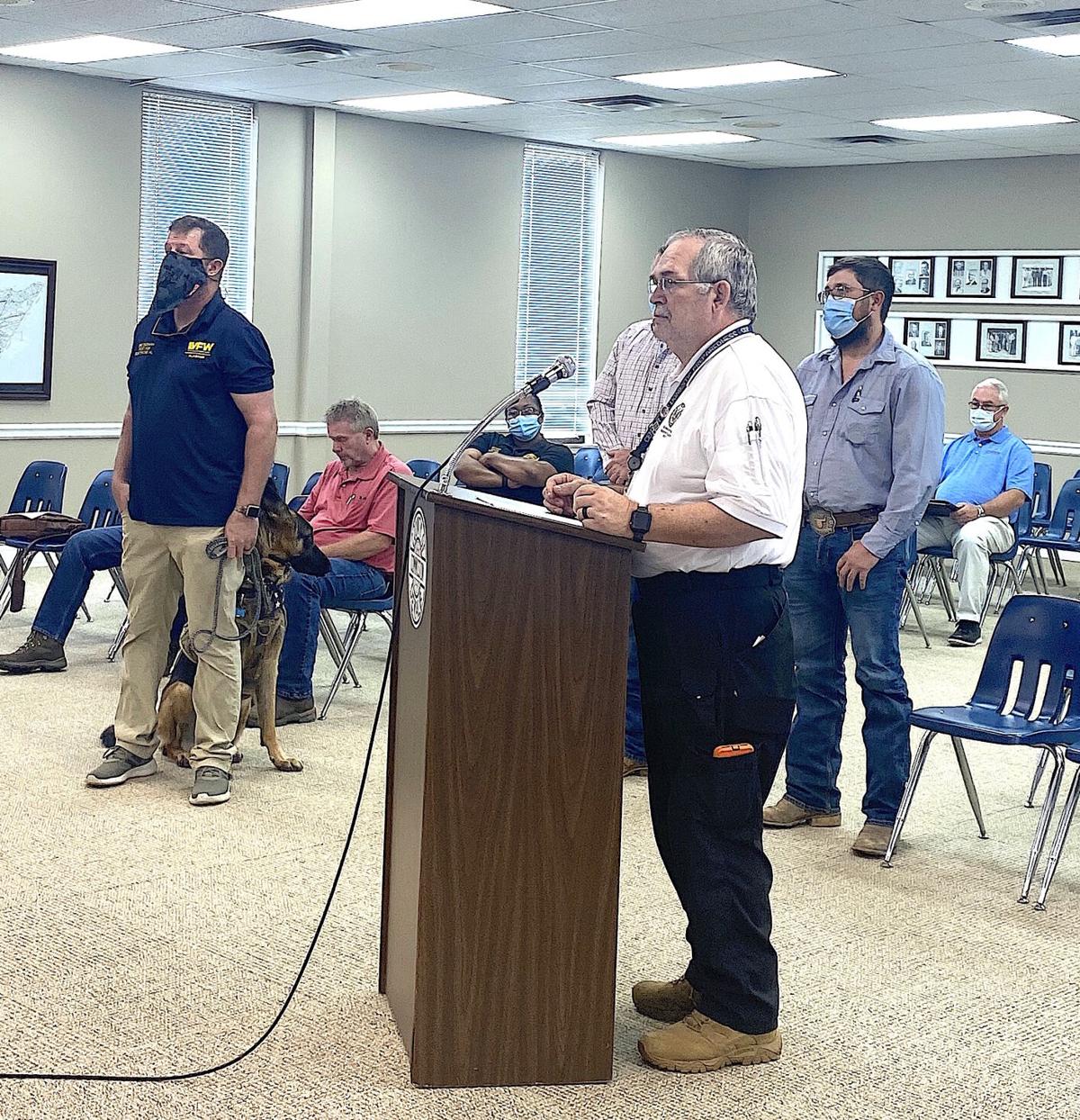 Pictured is Clifton addressing the commission as he presents Dudash, Samples and Starkey with plaques of recognition.

Pictured is Clifton addressing the commission as he presents Dudash, Samples and Starkey with plaques of recognition.

The DeKalb County Emergency Management Agency recognized VFW Post 3128 and the Northeast Alabama Agri-Business Center on Tuesday for their support during the COVID-19 pandemic.

“As you know, for the last year and a half, we’ve been dealing with COVID and we’ve had some exceptional help from the community and we want to recognize that,” Clifton said.

Both the VFW Post 3128, located in Fort Payne, and the Agri-business center, in Rainsville, partnered with the EMA and the Alabama Department of Public health earlier this year to host multiple, successful drive-thru COVID-19 vaccination clinics. Clifton reported 30,000 shots were administered during the clinics.

“We are deeply indebted to you all,” Commission President Ricky Harcrow said. “We thank you so much for the contributions that you’ve made in the last year.”

Road Department Superintendent Tom Broyles updated the commission on his department’s status on reopening roads that closed during flooding in recent years.

“We’ve had a lot of roads since the Easter [2020] flood,” Broyles said. “We’ve had at least three or four roads closed at basically any given time, and that’s been a year and a half I guess, or more.”

Broyles said “most roads” have opened back up with two still needing more work before they can reopen.

“One of those we’re going to be working on is County Road 185, which is down in the Lebanon area where the bridge deck was damaged on a bridge in the last flood we had, and we’re going to be replacing that [Tuesday and Wednesday] and hopefully by the end of [Wednesday] we’ll have it opened back up.”

With the reopening of 185, Broyles said that still leaves work to be done on County Roads 835 and 386.

Crews are also still mowing and bush hogging and “doing as much” bush cutting as they can since school is starting back and visibility is needed for buses on the road, he said.

During Tuesday’s meeting, the commission passed the county’s Transportation Plan for fiscal year 2022; however, County Engineer Ben Luther said it is not a fully comprehensive list of roads and two of the county’s districts, two and three, have yet to give a list of roads in need.

“We are required by law to adopt this plan by the end of August of each year, and with this being our only meeting of the month, we will adopt this today and obviously amend it at our next meeting and any further meetings that we need to,” Luther said.

The annual Transportation Plan encompasses the roads from each district that commissioners advocate to have “fixed” or worked on. According to Luther, this year’s plan includes the county’s regular funding for road work, along with Rebuild Alabama funds.

“What I intend to do is pick a handful of roads from each district’s list to put into the plan to cover the Rebuild funds for each district. Our total for the next fiscal year is $1.14 million.”

Split four ways, Luther said each district will receive $286,866.50. Any roads that did not make the picked list will be bid out together.

“This is basically just an accounting mechanism so we don’t have to have 50 or 60 roads in this plan,” he said.

Luther “hopes people understand” they will be doing much more work than just the initial list of roads.

• approved the in-house hire of J.D. Trammell as operations chief with the EMA.

• adopted the Aging ($129,530) and SeniorRx ($20,848) Contracts and the Rural Public Transportation Project Supplemental Agreement No. 2.

Harcrow said the SeniorRx Contract was started more than 20 years ago, and at the time, DeKalb and Cullman Counties were the only two that had the program in the state.

“One of my goals at that time was to help as many seniors as we could with that, and I don’t know how many we’ve got now, but it’s a tremendous amount of medication that is given out through the Council on Aging at either a lower cost or no cost at all.”

• passed the Budget Draft for the FY 2020 county budget. The proposal for the budget totals $24.5 million, up 4% from last year, according to County Administrator Matt Sharp. The plan includes a 2% increase in Cost of Living for county employees, in accordance with the state’s increase for employees. The commission will hold a work session in the coming weeks and a meeting in September to finalize the budget.

Commission members have reverted back to using COVID-19 precautions at their meetings, having members space out and allowing only two commissioners present at each meeting. District I Commissioner Shane Wootten and District III Commissioner Chris Kuykendall were not present during this week's meeting.

A few clouds. Low near 60F. Winds light and variable.