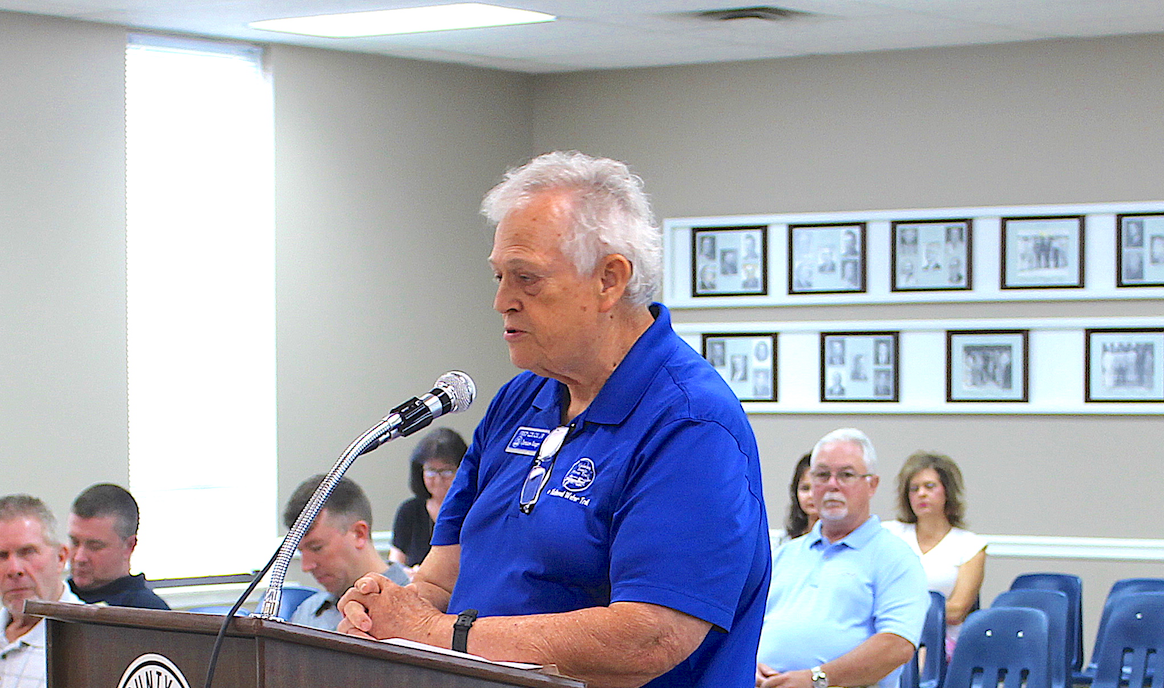 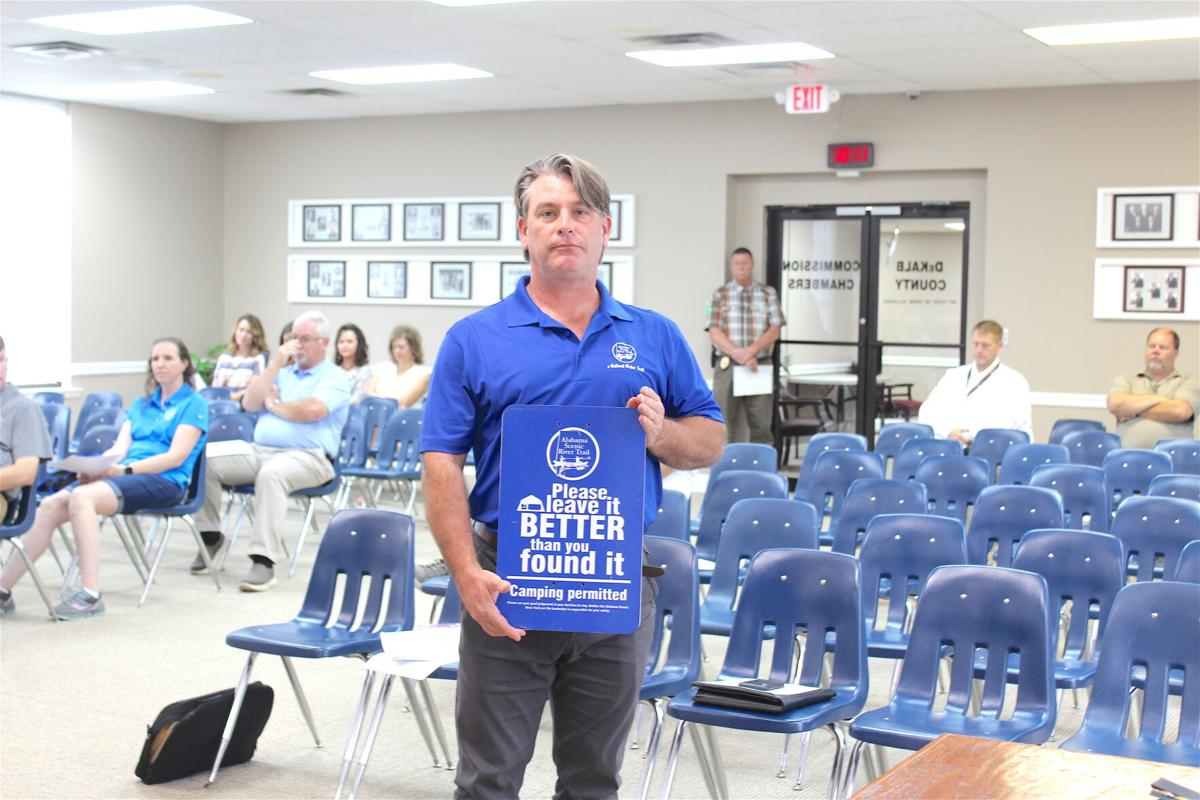 Bill Shugart displays the sign they will provide at the campsites. It asks patrons to “Please leave it better than you found it.”

Bill Shugart displays the sign they will provide at the campsites. It asks patrons to “Please leave it better than you found it.”

Couch wants to provide a map and waterway mile marker signs to the county. He would like to have them in every waterway in the state, saying “it’s a real safety issue.”

“I need support from the county commission to contact these property owners and help get the approval; people are going down the waterways, trespassing, clearing trees and building fires.

Couch said the fires create a black spot that takes 13 years to go away.

Couch said currently, he has 275 campsites statewide, and private individuals own most.

Broyles said they have County Road 34 at Oak Hill and County Road 1004 in the Geraldine area opened back up.

“We have to wait on Northeast Water to move a water line and relocate it, so it will be next week before we can continue working on County Road 453 East of Peaks Corner, and it’s still too wet to work on our County Road 85 project.”

The Council on Aging and Rural Public Transportation Director Emily McCamy also gave a brief update on the senior programs. Look for a more in-depth article in an upcoming edition of the Times-Journal.

Commissioners heard from DeKalb County Revenue Commissioner Tyler Wilks who said the Rainsville office would close until Oct. 1, 2021, due to staffing and training needs; however, an update on Wednesday said the annex will now be open on Tuesdays and Wednesdays from 8 a.m. to 4 p.m.

The annex is a satellite location for both the DeKalb County Revenue Commissioner office (www.revenue-dekalbco-al.us) and the Probate Judge office. The office is located at 98 McCurdy Ave S, Rainsville, and can be contacted at 256-638-9404.

Also during Tuesday’s meeting, County Administrator Matt Sharp announced the state is moving to ExpressVote Ballot Marking devices and away from the current AutoMark devices. The total cost is $125,000 for 50 devices, and it is all paid for by the Alabama Secretary of State’s Office. Commissioners approved the motion to honor the request.

DeKalb County Commission President Ricky Harcrow announced the county will receive half a million dollars in COVID relief funds. “Several months ago we found out that we could obtain $500,000 for facilities that met the requirements,” he said. “I found out this week that it was approved.”

DeKalb County EMA Deputy Director Michael Posey said, “What we are planning to do with this grant money is utilize it to install two multipurpose facilities; one in Cartersville and one in Kilpatrick.”

Posey said this was made possible by the grant money, which is part of the COVID-19 relief.

These facilities will be used for storing different items that could be used for responses in the communities as a result of COVID-19, he said, but the shelters will also be rated as FEMA 361 storm shelter as well.

“So they will be able to house up to 100 people, which will be beneficial to those communities,” said Posey.

In other business, the commission:

• approved a damage claim from William Mitchell for a busted tire and rim on Wade’s Gap.

• approved the transfer of Rita Bryant from the Revenue Commissioner’s Office to the Probate Office.

• approved the hire of Brianna Monroe as a part-time dispatcher at the DeKalb County Sheriffs Office.

• approved the resignation of Mike McElhaney of the Road Department.

• approved the traffic light agreement for the City of Fort Payne on County Road 137 Gault Ave. N next to Heil.

• approved a motion to investigate a property purchase for the DeKalb Tourism Association.

• approved a motion to participate in the 2021 Sales Tax Holiday in August.

The next meeting will be held at 10 a.m. on Tuesday, July 13, 2021, in the DeKalb County Administrative Building located at 111 Grand Avenue, SW, Fort Payne.