Elizabeth Wheatley, director of the Children’s Advocacy Center, said active prevention is the “defensive team” as opposed to the “offensive team” of abuse. 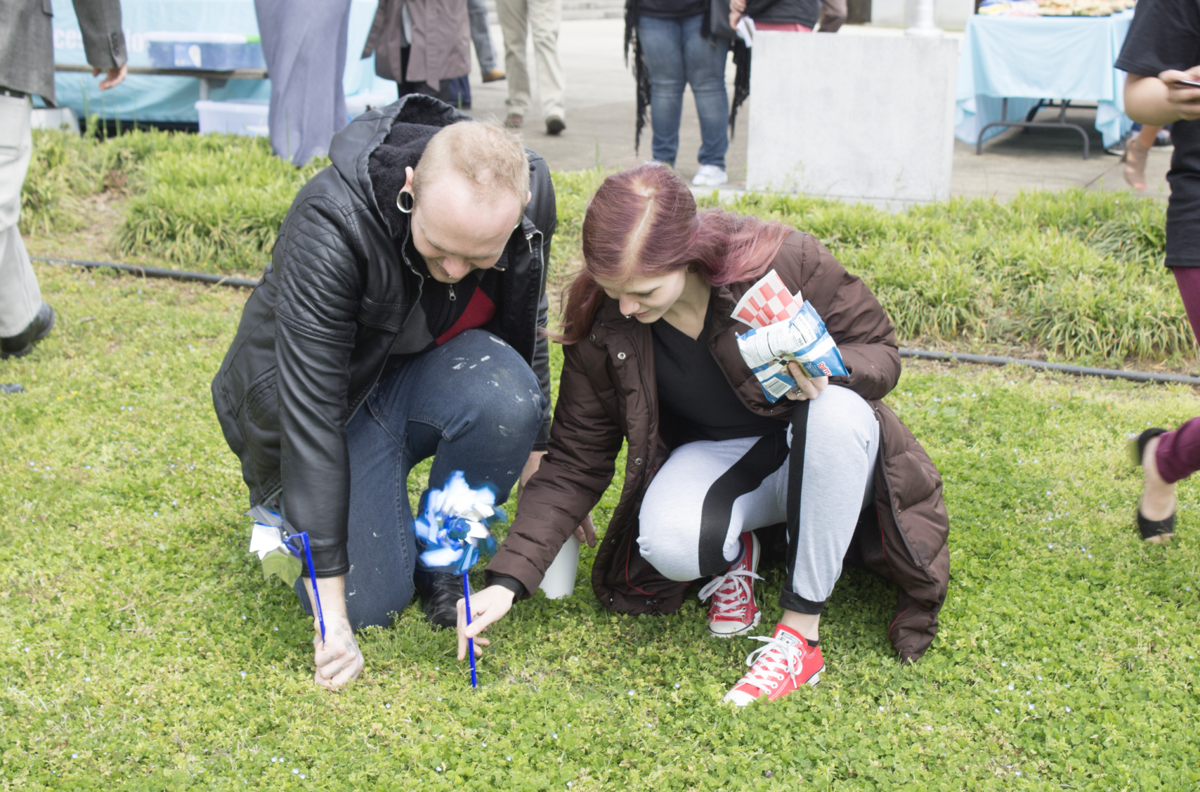 Participants plant pinwheels on the county courthouse lawn in honor of abuse victims. 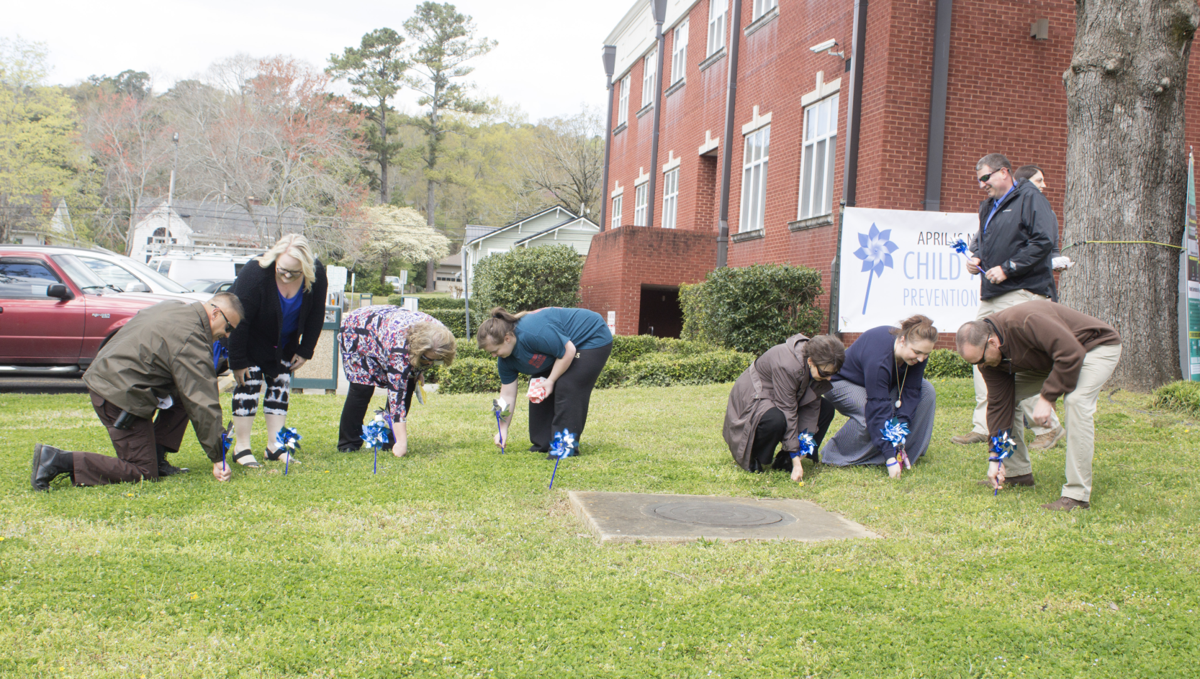 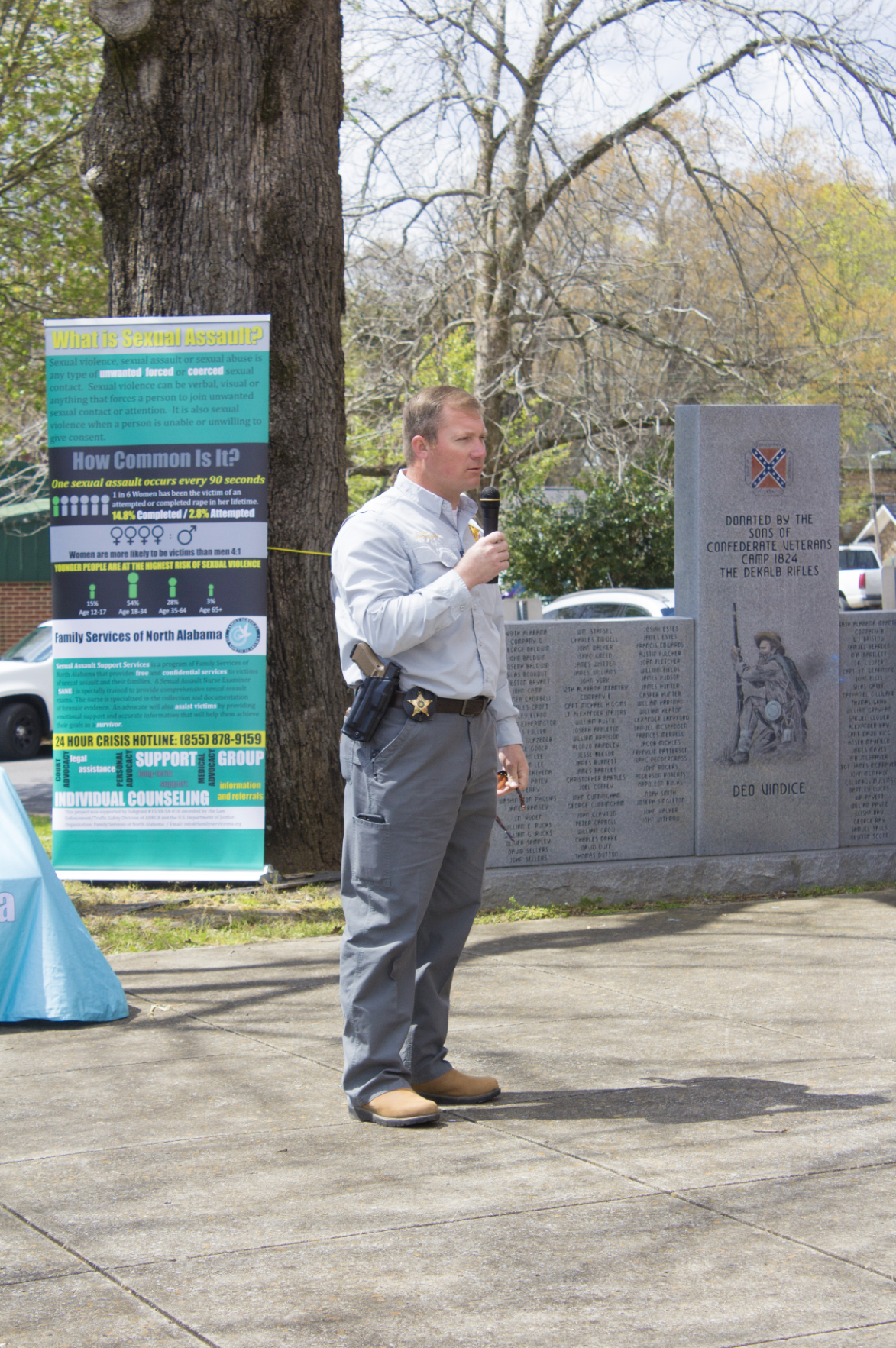 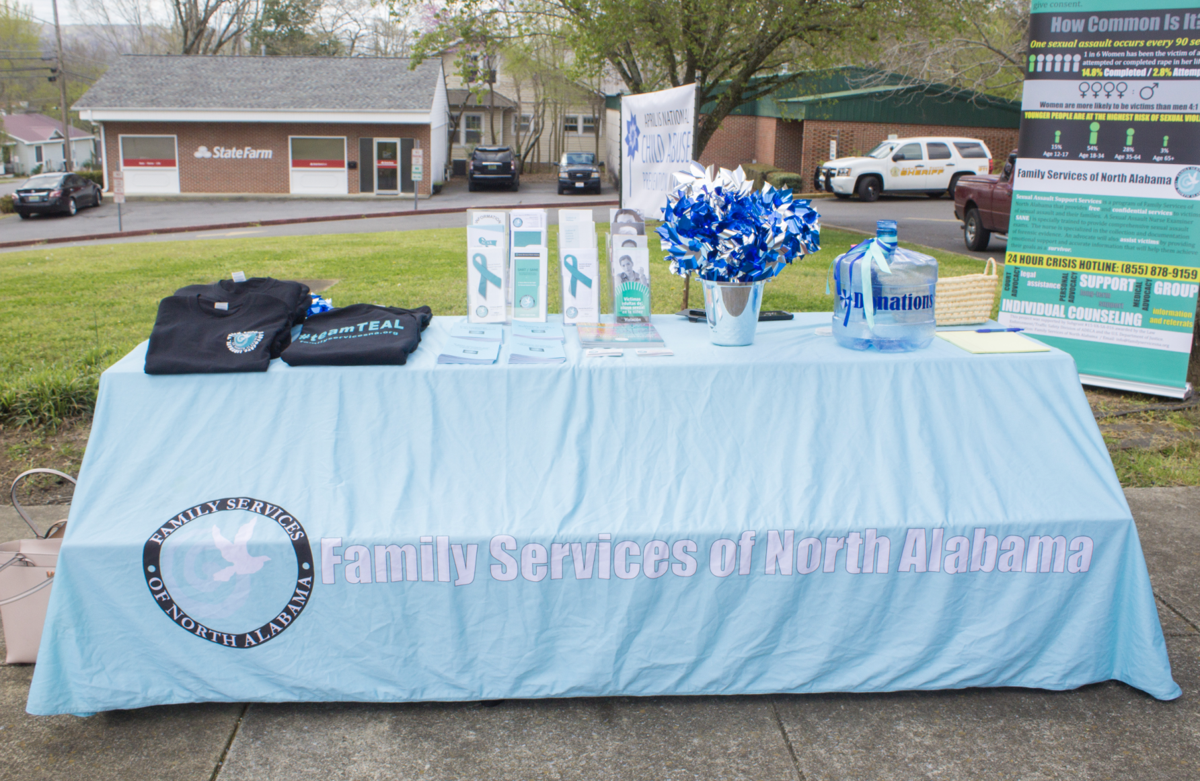 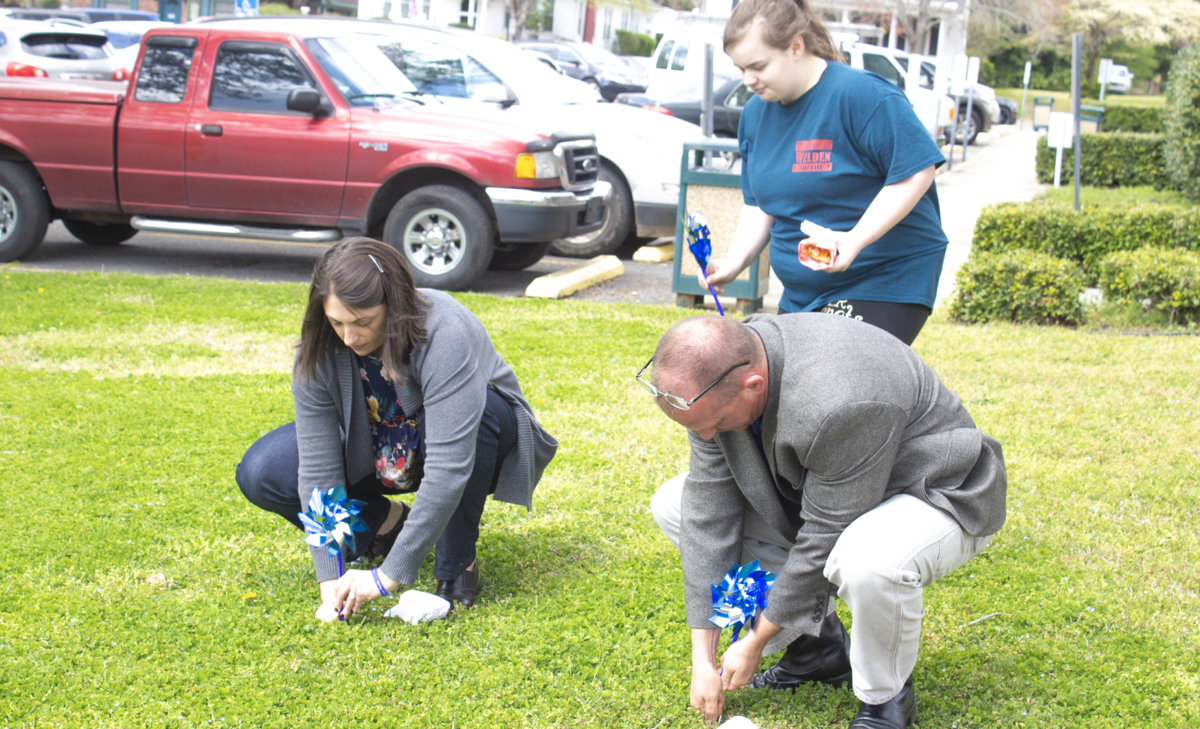 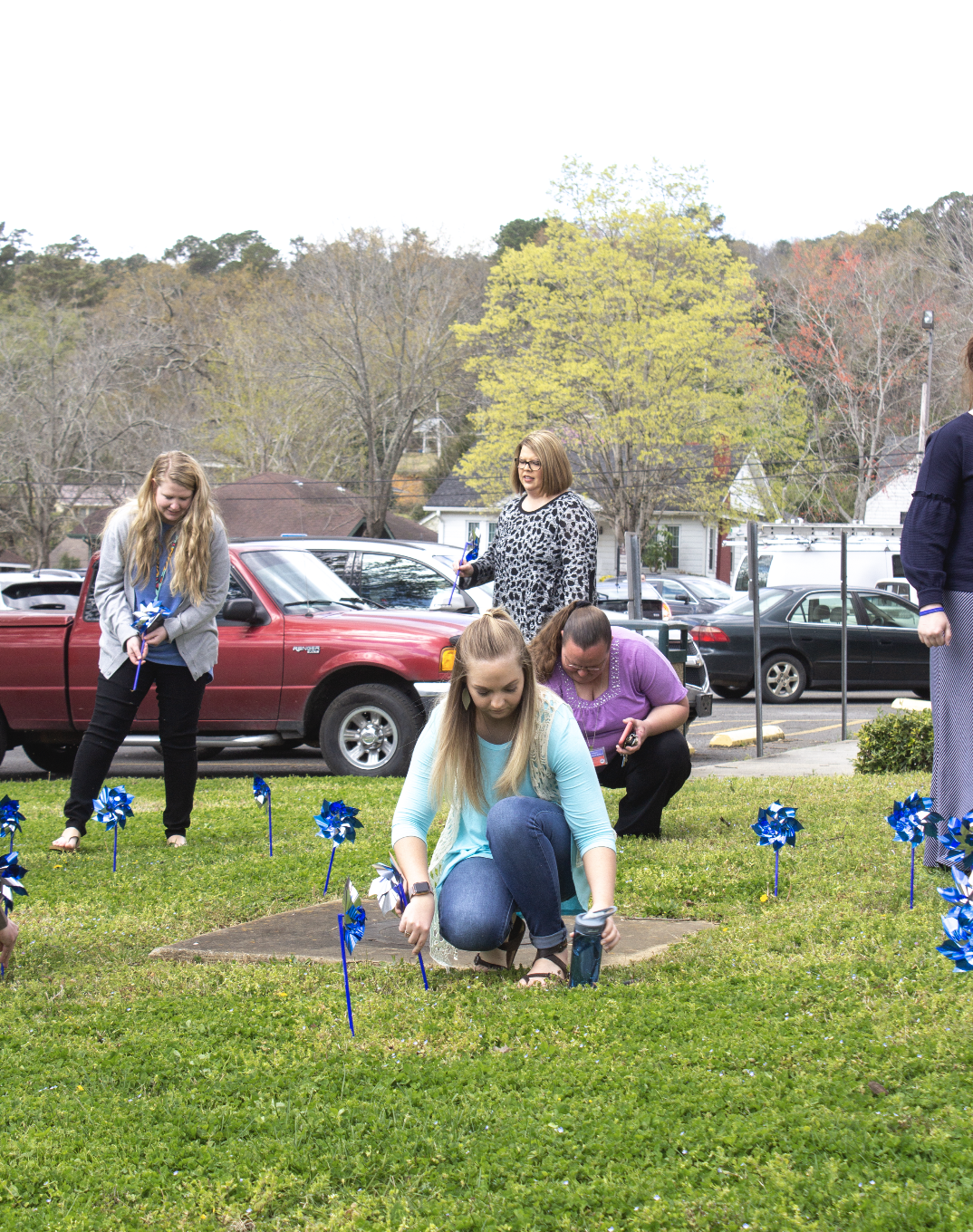 Elizabeth Wheatley, director of the Children’s Advocacy Center, said active prevention is the “defensive team” as opposed to the “offensive team” of abuse.

Participants plant pinwheels on the county courthouse lawn in honor of abuse victims.

Several agencies joined together on the DeKalb County Courthouse steps on Tuesday to recognize and bring awareness to the continued fight against child abuse and sexual assault in our communities.

Family Services of North Alabama teamed up with the DeKalb County Children’s Advocacy Center, the district attorney’s office, sheriff’s office and health department to “plant” pinwheels on the courthouse lawn to bring awareness to the abuse that is still prevalent in the county.

“Pinwheels for Prevention” is an event started by Prevent Child Abuse America more than a decade ago to serve as a national symbol for abuse prevention. Now, people across the country “plant” pinwheels annually to show support.

Sherri Hiett, executive director of FSNA, welcomed participants and allowed community leaders to speak on the importance of abuse prevention and announced her organization’s newest additions to DeKalb County.

District Attorney Mike O’Dell and Chief Deputy District Attorney Bob Johnston both spoke on the community services offered, the justice system in our county and how current cases are affecting residents’ mindsets on abuse.

“You all are very aware that last month a child was murdered here in our county,” Johnston said. “I find that, maybe more than ever before, our county specifically, is sensitized to people who are suffering from sexual abuse and child abuse.”

“Fighting the unwavering amount of sexual and child abuse in our area is comparable to slowly pushing a rock up a hill that is rolling back onto you daily,” Johnston said.

Johnston said one of the services the FSNA will now offer is in-county post-rape exams at the health department after May 1, 2019. In DeKalb County, the hospital could not conduct rape kits and sexual assault forensic interviewing due to a lack of trained Sexual Assault Nurse Examiners. Victims had to travel to Huntsville for the examination, and in that travel time, many people either changed their minds about furthering the investigation or couldn’t even find transportation there. This addition will allow DeKalb County victims to have a safe place to go for an exam and interview after an assault, Johnston said.

“It’s tough in our line of work to get people to come forward and go all the way through the justice system, it’s very tough every day, but I am so proud of the staff we have and [Ivestigator] Scott [Tarrant],” Welden said. “He does an amazing job. He is very passionate about what he does.”

“There are not enough people out here that can stop the evil that’s going on, but there’s enough of us out here that can stand up and keep that rock from rolling back,” he said. “That’s exactly what we try to do at the sheriff’s office, but we can’t do it without y’all.”

Angela Bell, with the DeKalb County Department of Human Resources, spoke from the standpoint of the children affected in our county.

“As advocates for the least among us, we must educate ourselves on the realities of abuse,” Bell said. “Here in DeKalb County, at any one time, there are 120 children in foster care.”

Children’s Advocacy Center Executive Director Elizabeth Wheatley said the CAC’s purpose is to be the “defensive team” fighting against child abuse, the “offensive team” of society.

“The Children’s Advocacy Center has been conducting child abuse presentations since 1994, and even despite our efforts, we still have victims, but I had a happy thought today,” she said. “Imagine how many we might have had if we had not done our programs.”

After agency representatives spoke, participants each “planted” a pinwheel in the courthouse lawn in honor of a victim of abuse.

Heitt thanked The Spot Coffee Shop for providing a free lunch for participants and a contest for four free gift cards. The efforts of the various agencies coming together to recognize and aim to prevent abuse is truly a team effort, she said.

A steady rain in the evening. Showers continuing late. Thunder possible. Low near 50F. Winds S at 5 to 10 mph. Chance of rain 90%.