Pictured top, is the DeKalb County Commission, Phil Holmes from the Governor’s Commission on Physical Fitness and Sport and Masters Games winners. 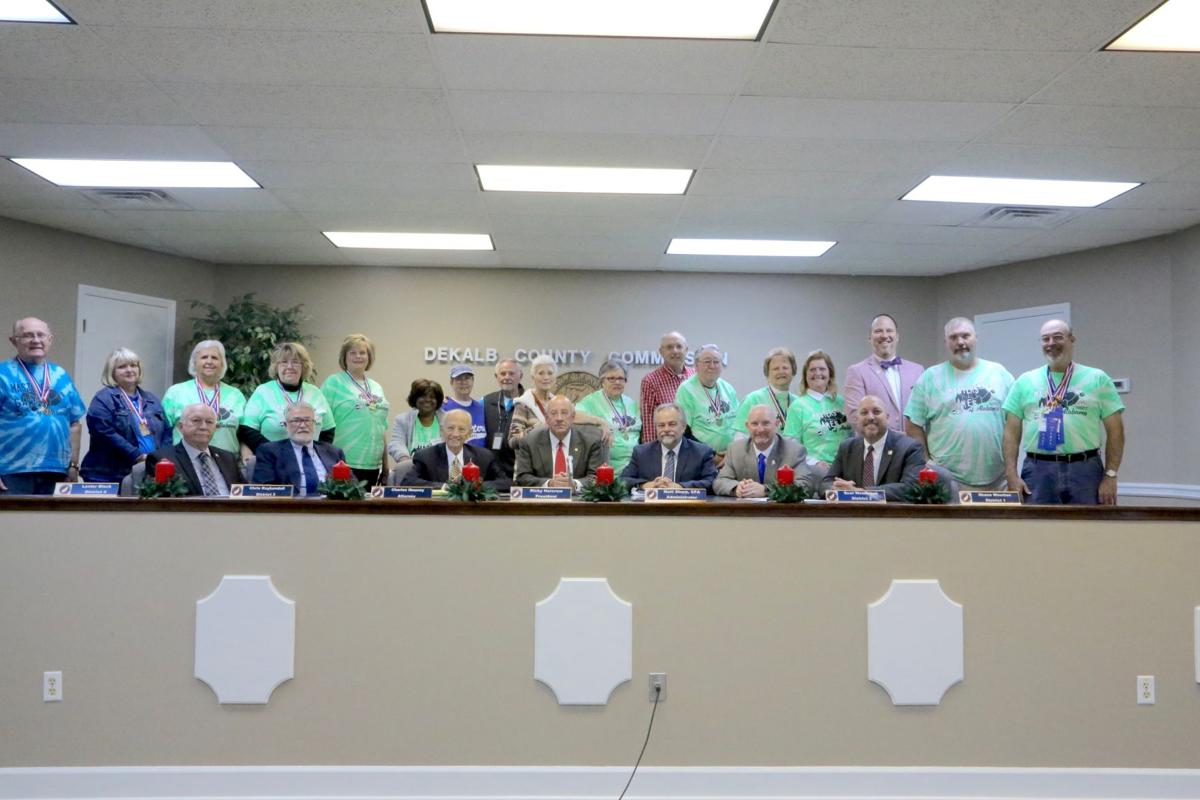 Pictured top, is the DeKalb County Commission, Phil Holmes from the Governor’s Commission on Physical Fitness and Sport and Masters Games winners.

Commission President Ricky Harcrow said Ledbetter had a great plan to govern since his tenure began in office as president of the Alabama County Commission Association.

“I recognize that [Nathaniel Ledbetter's] service not only to the counties but also to the municipalities has been beneficial to all of us,” Harcrow said.

On behalf of the state and county, Harcrow extended their appreciation with a plaque to Ledbetter for providing local government with more attractive retiring benefits to better retain and recruit quality employees.

“What this does is it makes it easy for us to put our newest employees back on the retirement system that is more beneficial to them and less costly,” Harcrow said.

He said while they would like to do a lot more, this allows them the opportunity to serve those who serve them.

Addressing the commission, Ledbetter said, “It’s always an honor to be here with the county commission to serve and crusade the work you do.”

“I get to see other commissions and what they go through, and we are very blessed in DeKalb County to have a group of men that work as hard as you guys do together,” he said.

Ledbetter said there is no question that we “accomplish more working together.”

“I am certainly proud that we got this bill through, and I think it will help keep employees,” he said.

According to Ledbetter, the bill did not pass the first two times it was presented.

“This is actually our third try, so the third time was a charm,” he said.

Ledbetter said employee retention had been an issue across the state with firefighters, police officers, and county commission employees who “all lost a lot of good employees because of problems with retirement.”

He said the bill would not only help in the long run but will also help retain current employees.

“I hope this is a start to continue to keep those folks,” he said. “I can only say with things that have happened in the last couple of years with the legislator working with county commissions, that the future is brighter in Alabama and I certainly believe that’s in part to working with folks such as yourself and our municipalities.”

Ledbetter expressed his appreciation for his recognition and said he was “humbled by it.”

An in-depth story about County Commission Attorney Charles Mauney is being developed by staff writer Cinthia Rico and will appear in an upcoming edition of the Times-Journal.

• accepted the resignation of Nathaniel Smith as District II crew leader from the road department.

• approved to hire Danny Bray and Corey Bouldin for the road department.

• heard updates from the Director of DeKalb County Transportation and Council on Aging Emily McCamy who briefed the council on the following events and programs:

1. Veterans Breakfast Social is set for Dec. 12 at 9 a.m. at the Council on Aging, upstairs. It’s open to veterans of any age and meets the second Thursday of even months.

2. The final registration event for the Commodity Supplement Food Program that provides a monthly food box for qualifying seniors 60 or older is Dec. 12 from 9 a.m. to 11 a.m. at the Council on Aging in the downstairs area of the building.

3. McCamy also provided an update on the Medicare open enrollment that began Oct. 15 through Dec. 6.

She said Lynn Hixon and DiAnne Callahan have seen 458 people during the open enrollment time period and helped 224 of those people change to better plans, saving those clients $558,246.22 next year.

She said Hixon and Callahan also identified several individuals that qualify for help in the Prescription Assistance Program Senior Rx as well as other programs.

“I am very proud of how hard Lynn and DiAnne have worked to help them, and how hard the rest of our staff have helped with scheduling and handling everything else in the office while they helped these clients,” McCamy said.

• heard from Phil Holmes from the Governor’s Commission on Physical Fitness and Sports, who provided the commission with an update on this years Masters Games.

He said this year, DeKalb County Council on Aging transported 24 participants in the Masters Games and they came from Collinsville, Fort Payne, Fyffe, Grove Oak and Sylvania.

1. At the District Games in Huntsville this past summer, 83 ribbons were earned, there were 13 qualifications for the State Games.

• approved to place the IT Server out for bid.

• approved to send the following personnel to trainings for the sheriff’s office: Nick Brown to Huntsville Jan. 1, 2020 and three SROs to DARE training to Mississippi in January 2020

• approved the minutes from the Nov. 26 meeting.

Partly cloudy in the evening with more clouds for later at night. Low around 35F. Winds light and variable.