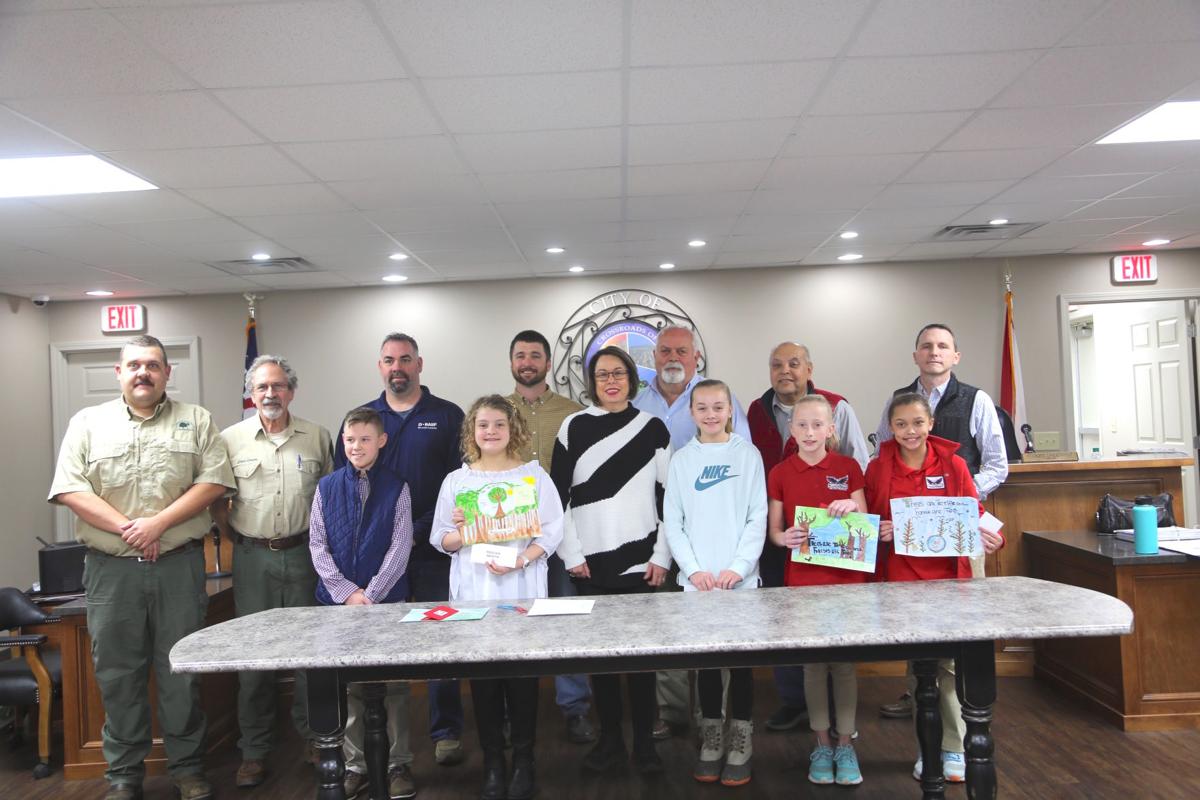 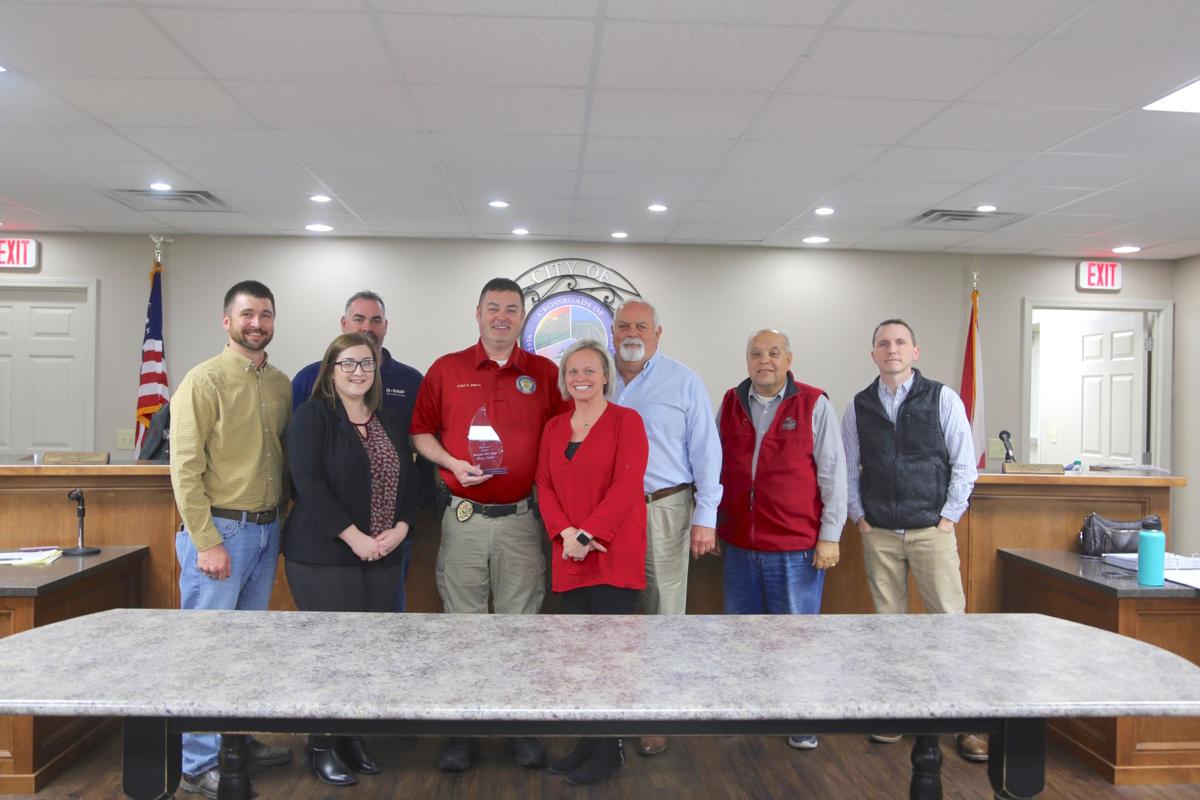 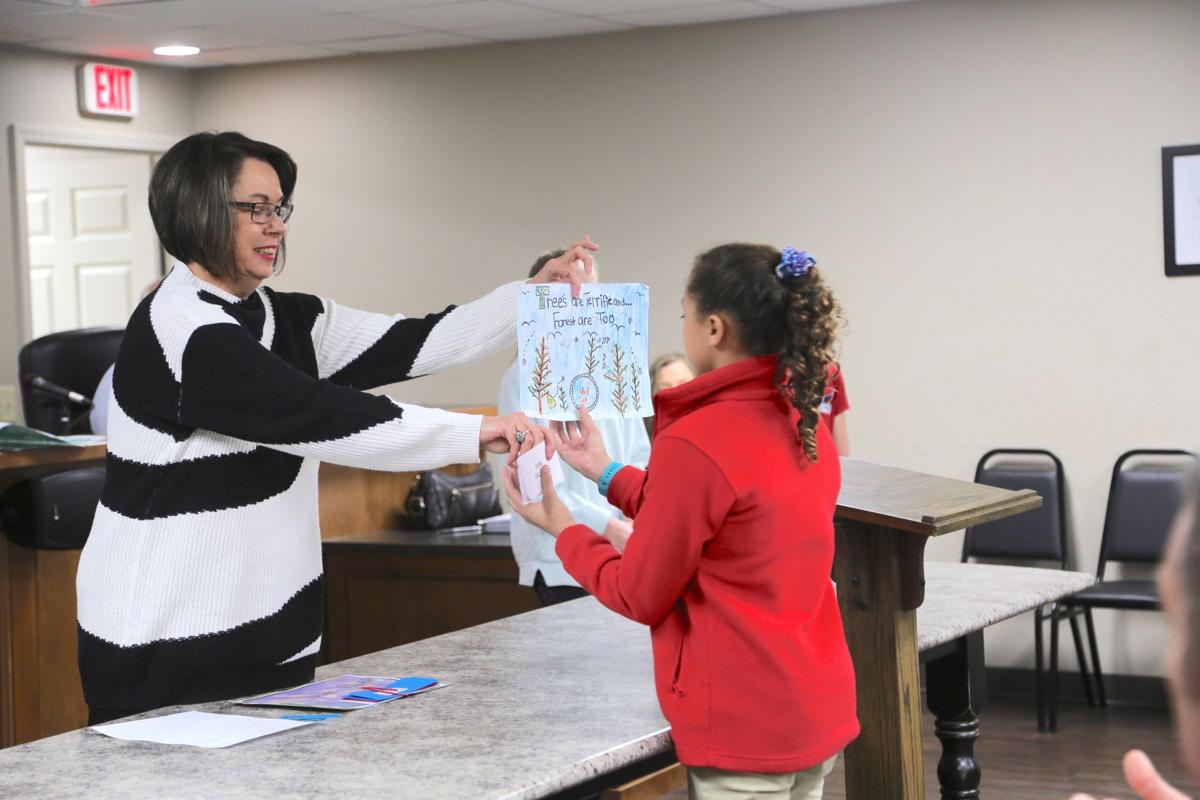 The Times-Journal employees select an individual each year who goes above and beyond the call of duty and helps better the lives of others in the community.

“We all enjoy working with Chief Smith. He is very passionate, dedicated, and cares for his community,” said Dunne.

– Editor’s note: An in-depth story is being developed by staff writer Cinthia Rico and will appear in an upcoming edition of the Times-Journal.

The council also heard from the Tree City USA Board Chairperson, Kayron Guffey.

“This is the start of our seventh year as a Tree City, and this is the first year we’ve been able to be included in the poster contest,” said Guffey.

She said the Rainsville City Council was “great,” providing an $800 sponsorship that was matched by Rainsville Technology Inc.

“I was able to buy 14 trees. We are going to plant one at Cornerstone and one at Plainview, weather permitting, next Thursday, Feb. 27, which is Rainsville’s Arbor Day,” Guffey said.

She said this year she was “really excited” to be able to incorporate the poster contest that included Plainview High School and Cornerstone Christian Academy fifth-grades.

The following are the Arbor Day poster winners:

Guffey said they had over 105 poster entries for the Arbor Day poster contest.

“We are going to plant the other [remaining] trees in the Rainsville City Park weather permitting,” she said.

Brannan spoke of the success and partnership between the city and the school system on the Fire Science Program.

He introduced Sierra Franks and Caitlin Phillips, two students from the program who were set to compete Friday.

“We also have six students who will be going to state in April,” said Brannan.

He said they appreciate Northeast Alabama Community College for helping them with dual enrollment through the Fire Science Program.

“Everybody is doing a great job. Hopefully, it’s going to continue to be great,” said Brannan.

The council also heard updates from the following departments:

• City Attorney Nikki Phillips spoke to the council regarding the reinforcing of the preexisting Ordinance 5-21-96 that requires a permit in connection with installation or repairs of utilities under city streets.

She said the dollar amount of a bond or deposit needed to be discussed further by the council to set or determine a set amount as well as the process companies would need to follow.

Councilman Marshall Stiefel clarified the ordinance pertains to city streets and not an individual’s own driveway. He said they don’t want people to get “scared” thinking they are trying to regulate something minor.

“This is not about you doing something to your own driveway,” he said.

• approved to Resolution 02-20-2020 to surplus a printer from the Rainsville Public Library.

• approved the purchase of two new computers for the Rainsville Public Library at $943.21 with funds provided by the county commissioner.

• approved the bid from Boozer Construction for the repairs on the intersection of Garrett Street SE and Chavies Road.

• approved the repair of Country Club Lane for $800.

• approved to install a street light and pole at the intersection of Deer Street and Scott Ave. at $300.

• approved the purchase of four enter and exit signs for the Tom Bevill Enrichment Center at $1130.

• approved to open bids for this year’s pavement project for Apr. 15 at 12 p.m. at the Rainsville City Council Chambers. The project includes the resurfacing of Church Ave. and White Street and Grimes Street and a portion of Northside Drive.

• approved to post a part-time dispatcher position (as needed). Applications are accepted until Mar. 18.

A mix of clouds and sun during the morning will give way to cloudy skies this afternoon. High around 70F. Winds NNW at 5 to 10 mph.

Rain showers early will evolve into a more steady rain overnight. Low 48F. Winds light and variable. Chance of rain 100%. Rainfall around a quarter of an inch.

Rain showers early will evolve into a more steady rain overnight. Low 48F. Winds light and variable. Chance of rain 100%. Rainfall around a quarter of an inch.

Partly cloudy skies during the evening will give way to cloudy skies overnight. Low 46F. Winds light and variable.