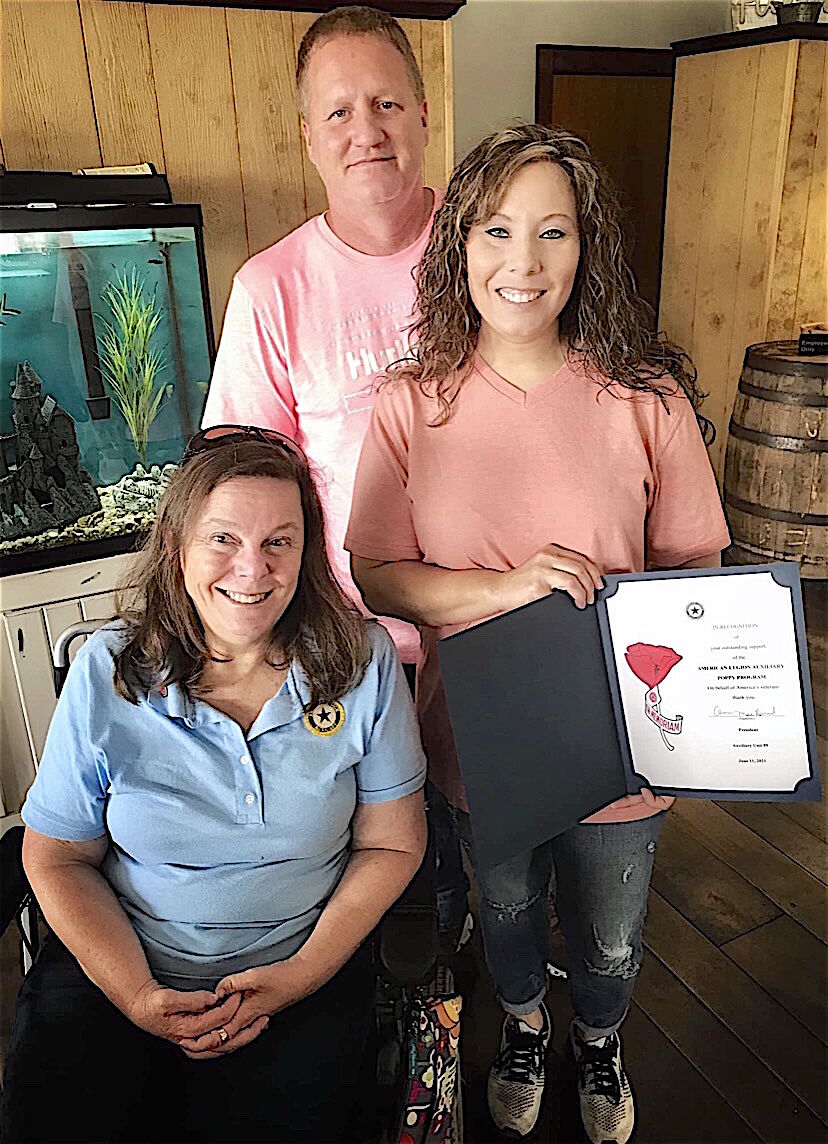 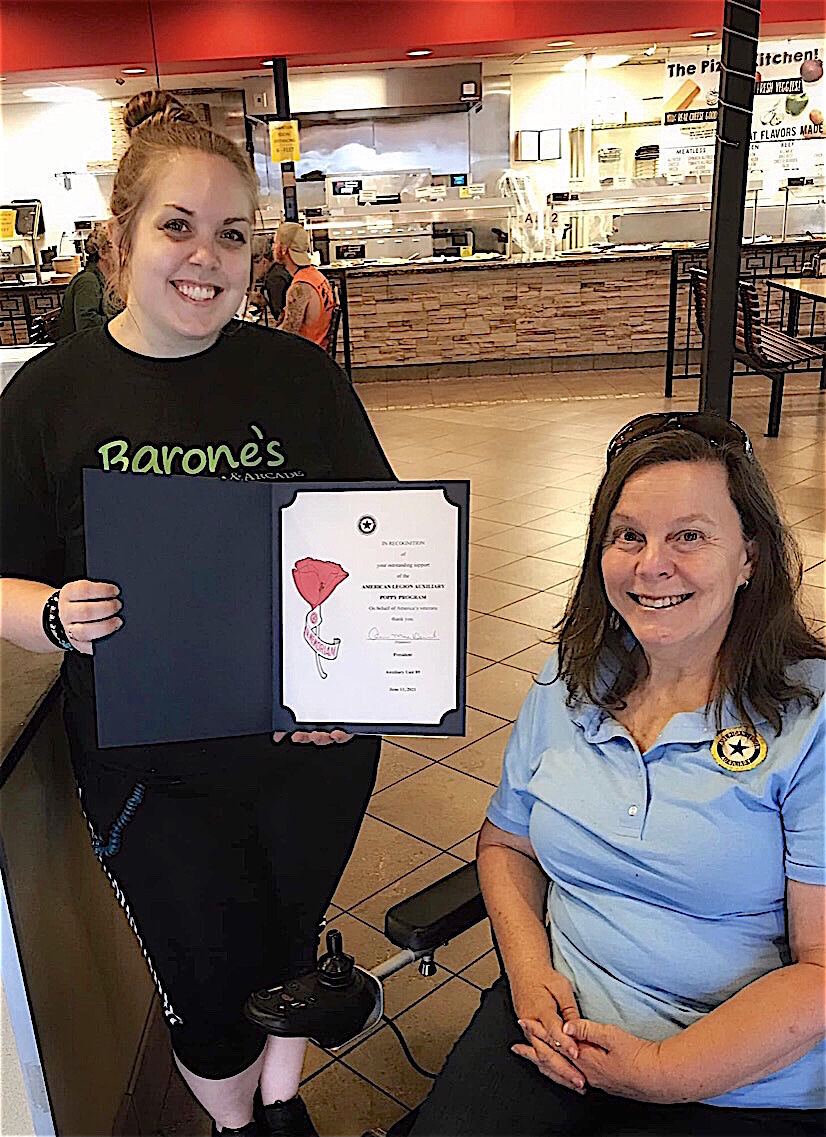 MacDermid presents a certificate to Katie Barone at Barone’s Pizza in Fort Payne. 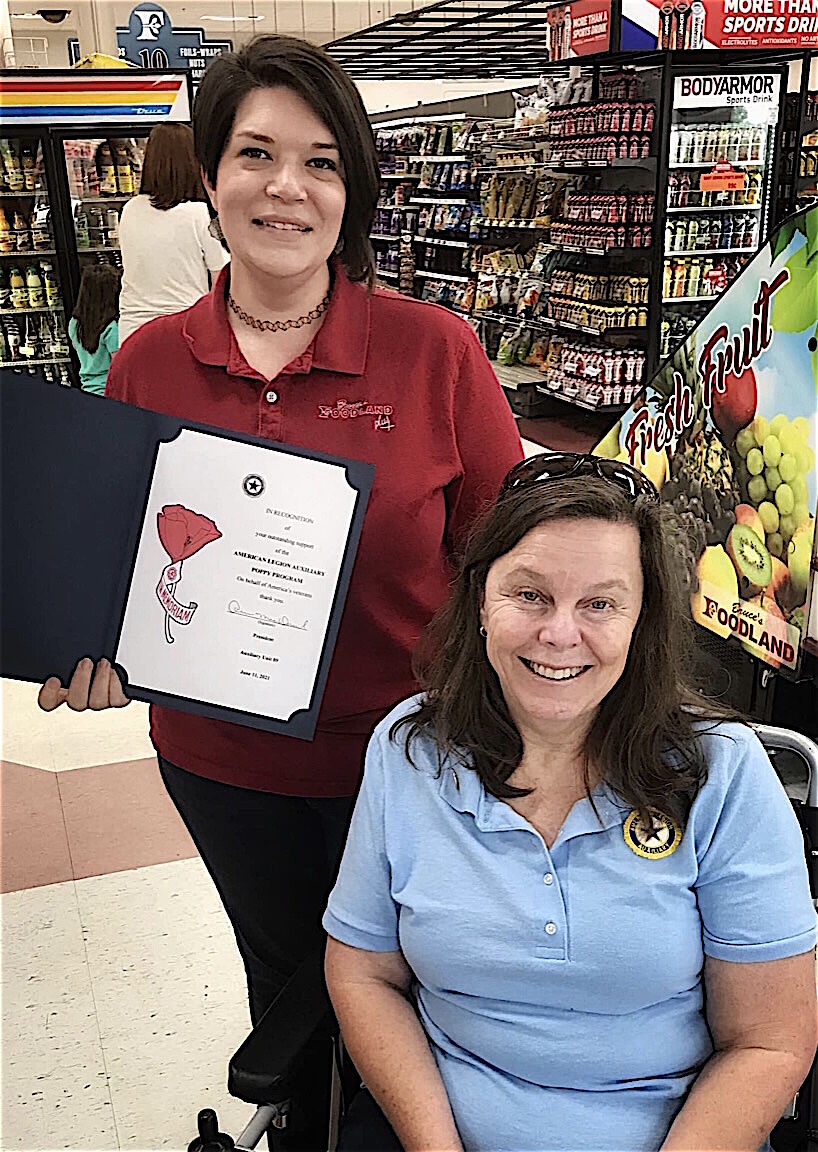 Pictured are Jill McKinney and MacDermid at Bruce’s Foodland Plus in Fort Payne.

MacDermid presents a certificate to Katie Barone at Barone’s Pizza in Fort Payne.

Pictured are Jill McKinney and MacDermid at Bruce’s Foodland Plus in Fort Payne.

American Legion Auxiliary Fort Payne Unit 89 held a Poppy Drive from May – June to raise both awareness and funds for veterans and veteran families in need. The Auxiliary is bringing back the time-honored tradition of sharing the Poppy Story, poppies and collecting funds to make a difference.

We would like extend our heartfelt gratitude to Woody’s in Dogtown, Circle K in Collinsville, Barone’s, Foodland, and Minvale Baptist Church in Fort Payne for assisting us, both in setting up poppy cans and giving voice to the story of the poppy. We’d also like to say how much we appreciate those who placed coins and dollars in these poppy cans, your faces may not be seen - but you’ve impacted the lives of others! Thank you!

Through these efforts $186.38 was raised. We are one of many Units in District 13, which is one of many districts, divisions and states… again, it all adds up to help veterans and veteran families.

Many in the Auxiliary are familiar with the story of a woman named Moina Michael, who was fondly dubbed “The Poppy Lady”. After WWI she taught a class of disabled veterans at the University of Georgia. Moina saw firsthand the need for financial and occupational support. Moina was so moved by Canadian Lieutenant-Colonel John McCrae’s poem, “Flanders Fields,” that she decided to use silk poppies as a way to raise funds for her crucial mission.

McCrae’s poem was written on May 3, 1915 while stationed in the trenches of Ypres, Belgium in an area known as Flanders, during the bloody Second Battle of Ypres. After officiating a funeral for his friend and fellow soldier Lieutenant Alexis Helmer, McCrae rested near his grave to write this poem when he noticed among the many make-shift graves poppies were flourishing. McCrae in self-criticism would discard the poem, but his fellow soldiers retrieved it.

What a scene this must have been, lest we forget the price of freedom.

In Flanders fields the poppies blow

Between the crosses, row on row,

That mark our place; and in the sky

Scarce heard amid the guns below.

We are the Dead. Short days ago

Loved and were loved, and now we lie,

Take up our quarrel with the foe:

To you from failing hands we throw

The torch; be yours to hold it high.

If ye break faith with us who die

We shall not sleep, though poppies grow

A few clouds from time to time. Low around 55F. Winds light and variable.