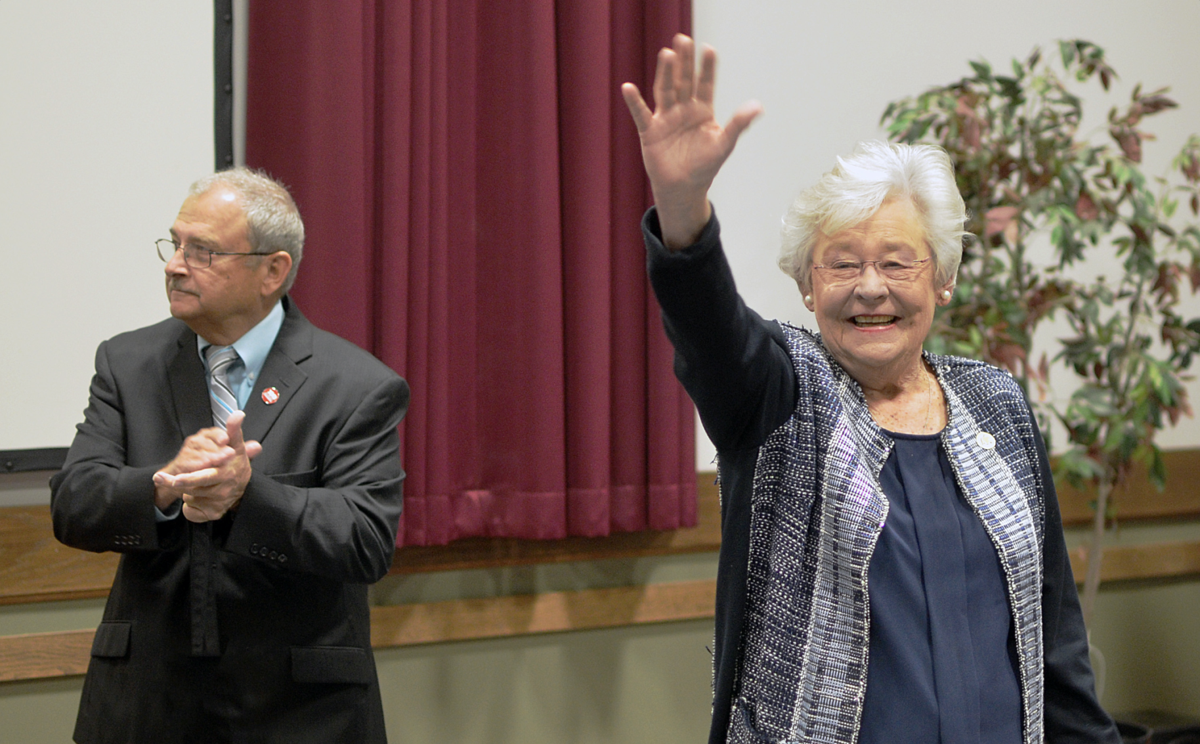 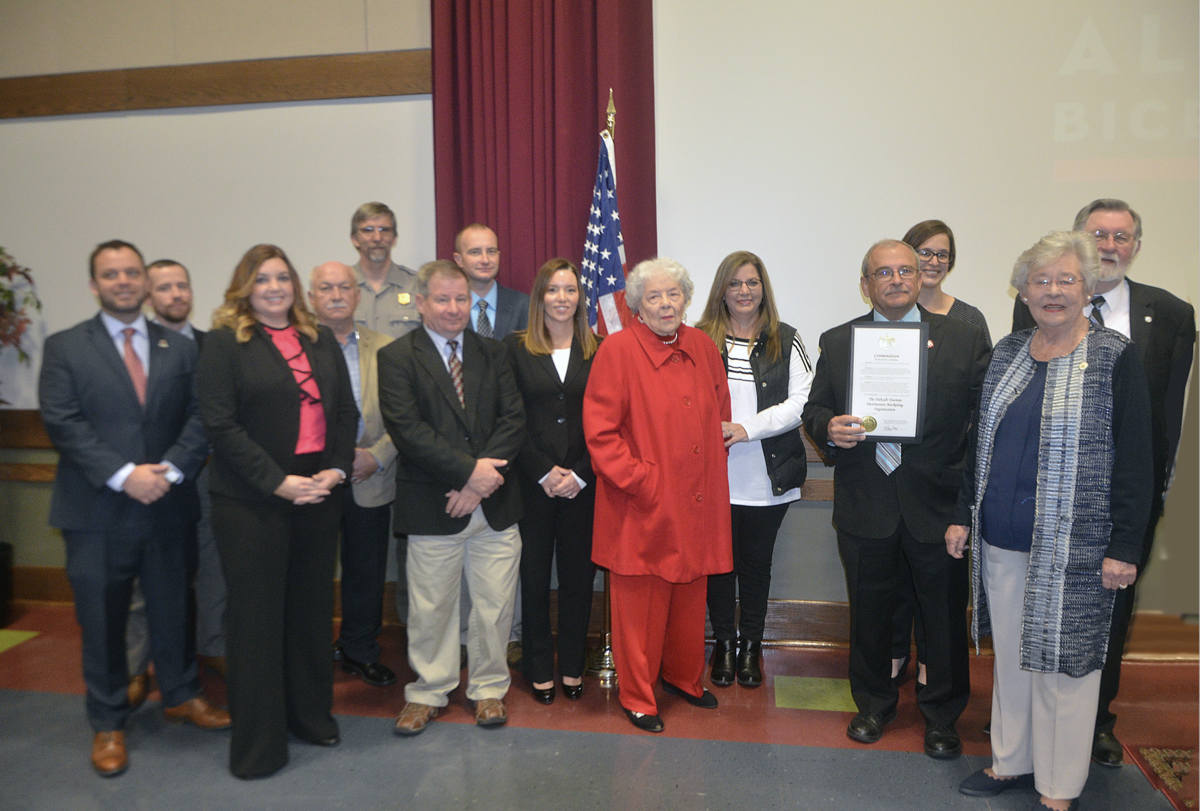 John Dersham presents copies of his book to Gov. Ivey. Randy Owen offers a warm welcome as he hugs Alabama Governor Kay Ivey during her visit Friday to the JSU Field School at the Little River Canyon Center. 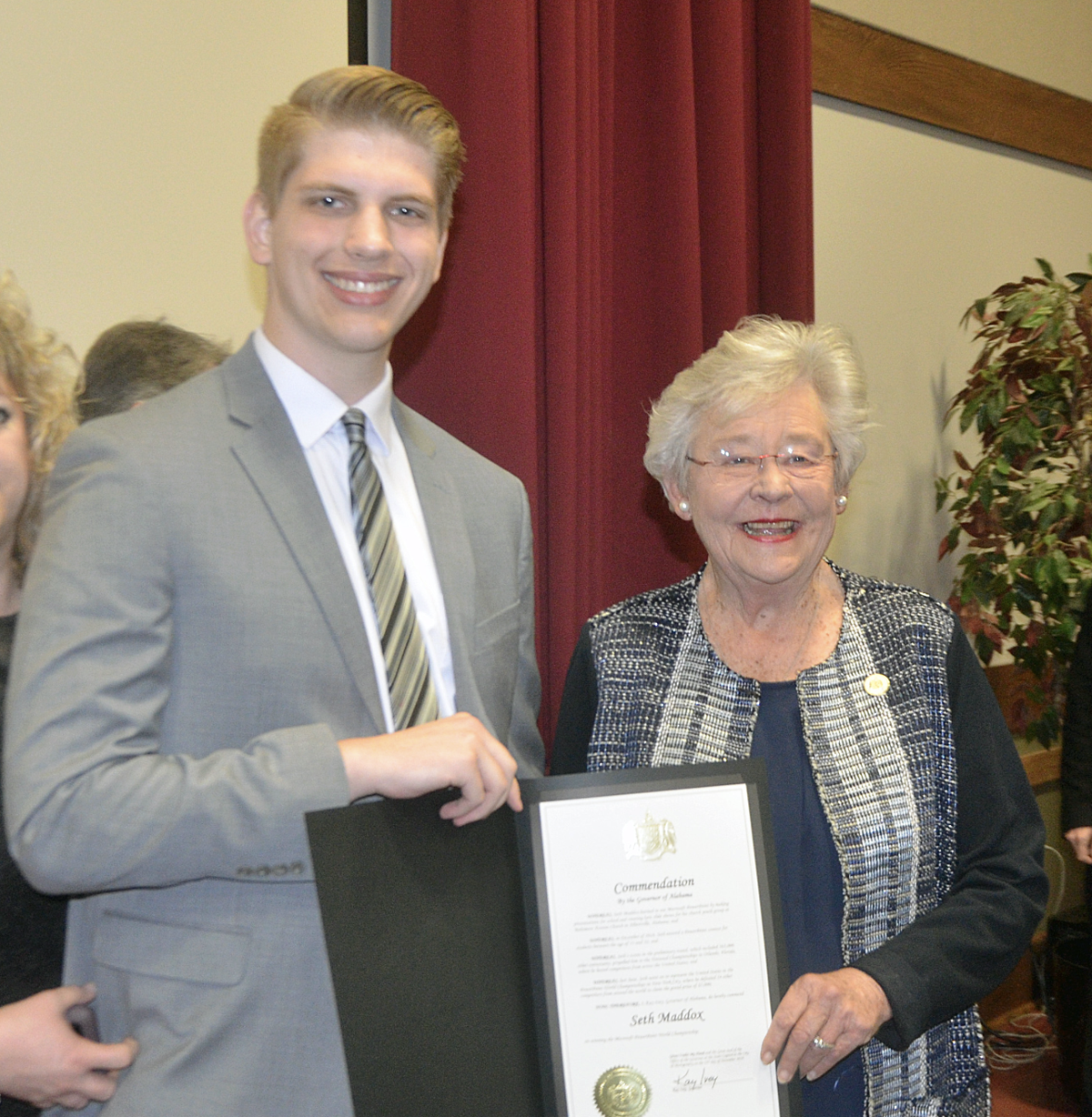 Gov. Ivey offers a commendation to Seth Maddox of Geraldine, who won the crown of World Powerpoint champion this summer. 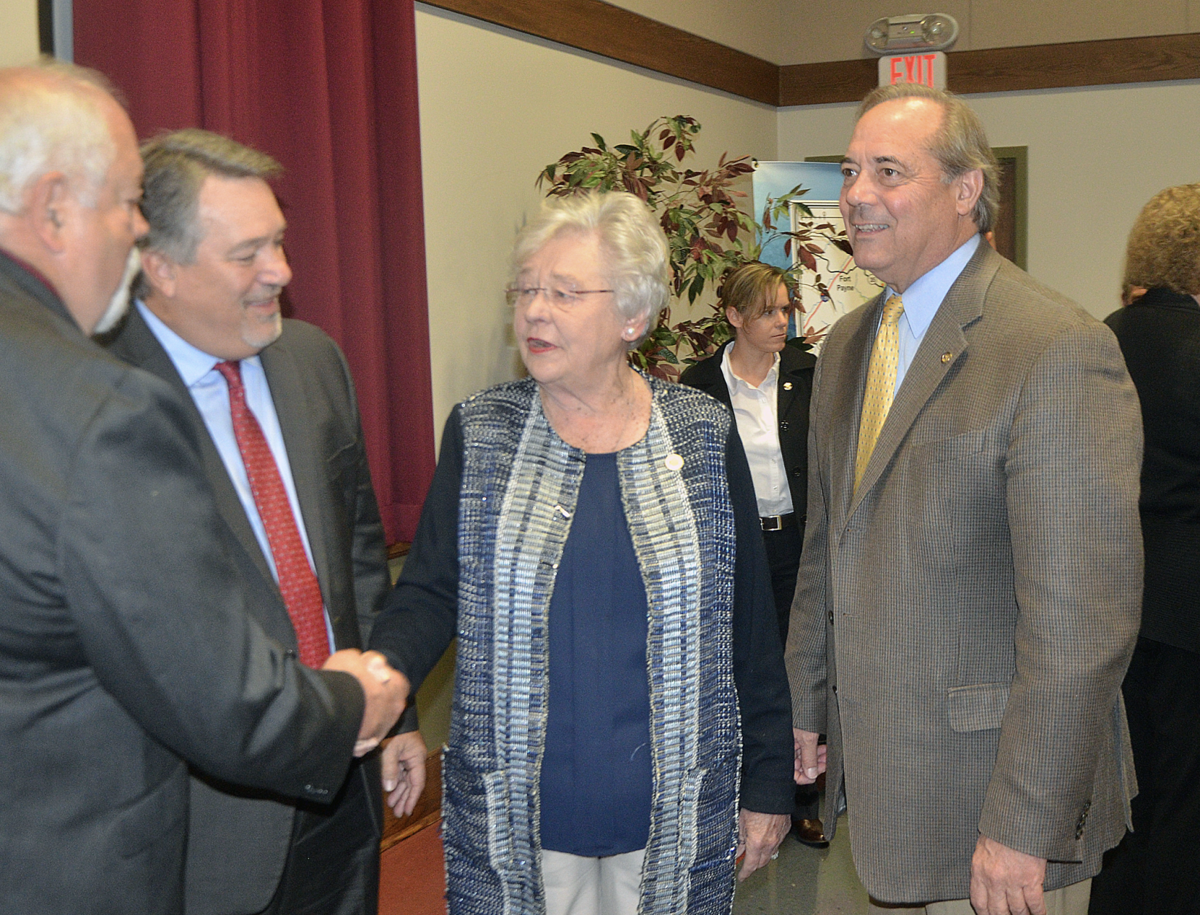 John Dersham presents copies of his book to Gov. Ivey.

Randy Owen offers a warm welcome as he hugs Alabama Governor Kay Ivey during her visit Friday to the JSU Field School at the Little River Canyon Center.

Gov. Ivey offers a commendation to Seth Maddox of Geraldine, who won the crown of World Powerpoint champion this summer.

Alabama Governor Kay Ivey visited DeKalb County Friday morning, addressing a crowd at the Little River Canyon Center. Dec. 14 marks the grand finale of the state’s three-year bicentennial commemoration. Ivey was proud to declare that excitement about this milestone had spread “to every corner of our state.”

“Governor, we are so proud to have you here,” said Tourism DeKalb Executive Director John Dersham as he introduced the governor to the audience. He presented a brief video showing spectacular drone footage of attractions such as DeSoto Falls, High Falls, Bucks Pocket, Little River Canyon National Preserve, Cloudmont Ski Resort, and the Alabama Fan Club accompanied by atmospheric music. The video illustrated why the natural beauty of Northeast Alabama is so critical to the state’s tourism efforts.

“Tourism is a very large industry in the state of Alabama and DeKalb County. In the 1980s, I was living in Pennsylvania working for Eastman-Kodak. As I drove across the state, I kept hearing these wonderful pictorial songs about the state of Alabama. They were absolutely fantastic. The group Alabama… what great songs and history. Their songs really painted this beautiful scenic view of Alabama and especially the song about Little River Canyon, this beautiful preserve sitting right out here. It’s such an honor to introduce Randy Owen to introduce the governor.”

The Alabama lead singer took the podium and spoke fondly of Ivey as a close friend.

“Well, governor, we’ve made it this far,” Owen said. “I’ve known you a long time, and I am so proud of you. I’m a cancer survivor and you’re going to be a cancer survivor too. You are in our prayers, and we wish you the best of health.”

The 74-year-old Ivey revealed her lung cancer diagnosis in September, stating she expects a full recovery.

Owen recognized his Alabama bandmate Teddy Gentry, as well as other family members who all live near the canyon. “This is something really special because you can’t get Teddy to go anywhere,” Owen joked.

Owen welcomed Ivey to the Jacksonville State University Field School, pointing out various city, county and state dignitaries in attendance. “We are very honored to have you as our governor of the great state of Alabama.”

“DeKalb County is famous worldwide for being the home of the band Alabama,” Ivey said. “Thank you, Randy and Kelly, my good friends, for being here today. It means a lot.”

In her comments about the state’s bicentennial celebration, Ivey said, “In these 200 years, Alabama has celebrated some incredible people and milestones. From building rockets to send a man to the moon to our native Americans, being the birthplace of civil rights and becoming an international marketplace for goods and products. Alabama has indeed come a long way. And speaking of progress, I’m proud to tell you that due to the efforts of Sen. (Steve) Livingston and Rep. (Nathaniel) Ledbetter, the Rebuild Alabama initiative is taking effect and the City of Rainsville has an old bridge near it that is going to be replaced by a brand new bridge very soon.”

She was referring to the Boozer Bridge, which connects a dozen families to Rainsville over Caney Creek. Firetrucks have to travel five miles out of the way when responding to the area.

“One of the best parts of being governor is getting to travel around and meet the great people of our great state,” Ivey said. “That makes it truly special, so it’s a pleasure to be with all of you.”

Her first official event after becoming governor was speaking at the kickoff event in 2017 for the bicentennial campaign.

She then presented a commendation to Seth Maddox of Geraldine, calling him “an outstanding young man” and noting his achievement winning the crown of Microsoft Office Specialist PowerPoint World Champion in July. “We are mighty proud of you,” Ivey said.

She then presented a commendation to the Tourism DeKalb organization and its board members “in recognition of your remarkable work developing the tourism industry throughout the area. Over the last decade, this group has been recognized for excellence. Thank you for your service to the great state of Alabama.”

She invited everyone to join her on Dec. 14 in Montgomery for the Bicentennial Parade, Festival, and Concert. The finale presentation will include a concert with popular musicians from Alabama.

“Let’s step into our next century together being stronger. May God continue to bless all of you and the great state of Alabama,” she said.

The book contains more than 200 photographs covering every corner of the state, including numerous images from DeKalb County, accompanied by a foreword written by Auburn legend Bo Jackson.