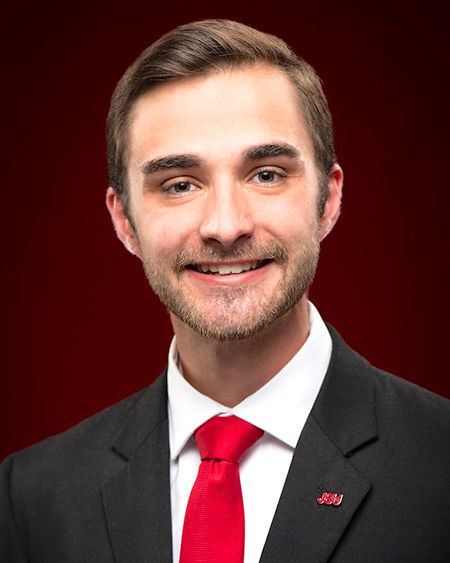 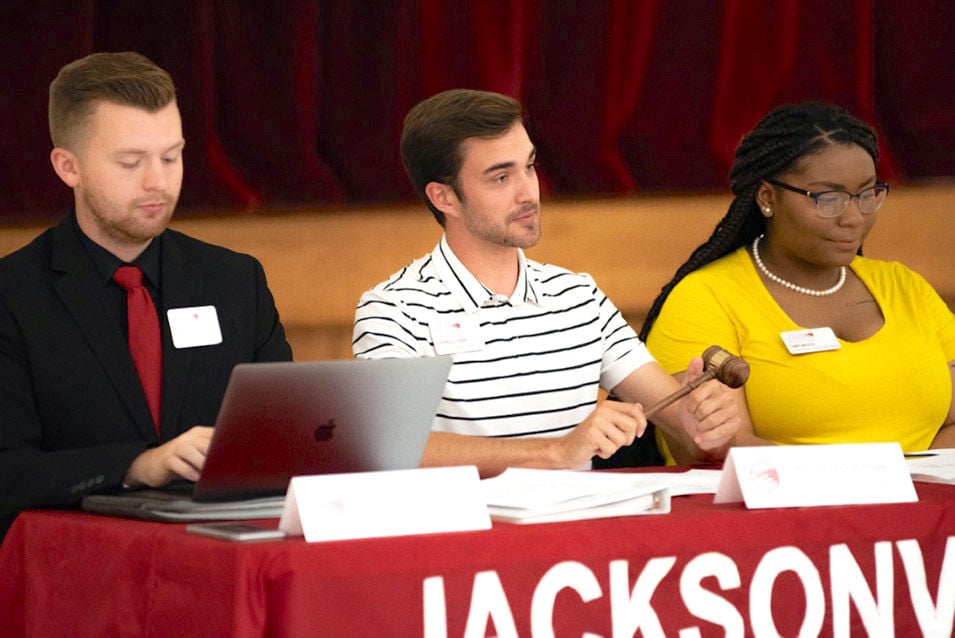 Jerod Sharp presides over the SGA with fellow leadership. 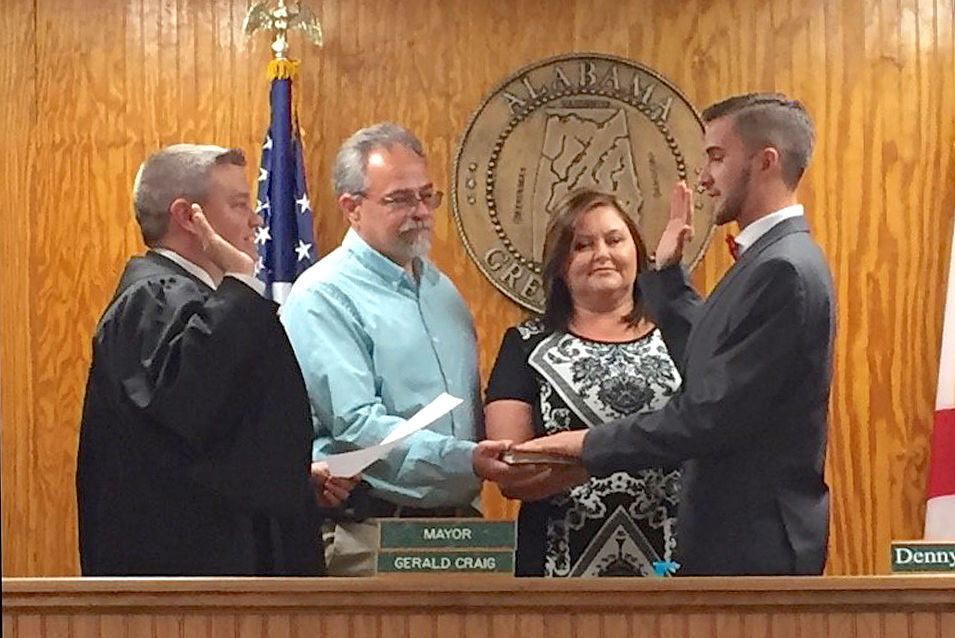 Sharp swearing in as councilman of the town of Sylvania 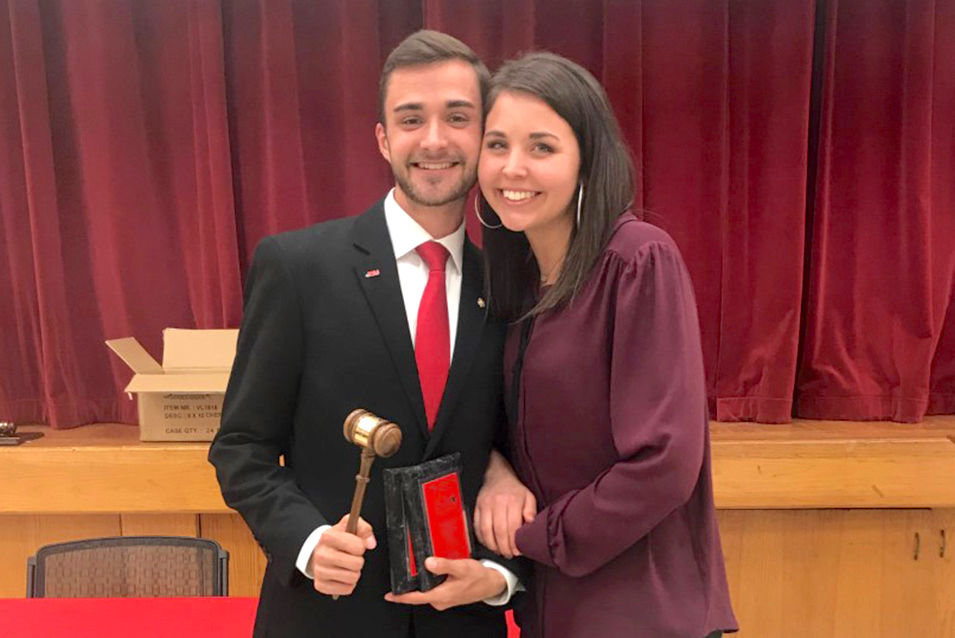 Jerod Sharp presides over the SGA with fellow leadership.

Sharp swearing in as councilman of the town of Sylvania

Jerod Sharp knew he was coming into office at a time unlike any in the history of JSU.

Sharp was elected SGA President in mid-April, just as COVID-19 was steadily spreading around globe, forcing the closure of countless schools and businesses. While the pandemic did not impede the political process entirely, campaigning, speeches, debates and voting all had to take place online

With the virus’ impact changing practically by the moment, Sharp and his cabinet are having to face governing away from campus as well.

“The SGA has always been quick to react to issues, and it has also always been as proactive as possible,” said Sharp, a senior from Sylvania, Ala. “From that, I can confidently say that I’m still able to advocate for students’ needs in meetings where decisions are being made that could potentially affect campus life.”

Being elected SGA president is a goal Sharp has had since coming to JSU as a freshman in 2017.

“It still seems so unreal,” he said. “I’m beyond humbled to actually be working in this role now. Jacksonville State University was one of the best decisions

I have ever made, and I am so excited to give back to those who are the reason the SGA even exists.”

But it will be a team effort.

“The VPs do a lot of behind the scenes work that the students don't see, and the students may not know how lucky they are to have four awesome SGA VPs who are going to do really big things this year,” he said.

Sharp’s campaign focused on improving communication between the student body and the JSU administration. He also wants to represent JSU’s increasingly diverse population while continuing to champion sexual assault awareness initially addressed by his predecessor, Ulises Herrera. As a sexual assault survivor, Sharp intends to work closely with the Title IX Coordinator, Jennifer Argo, and Director of Community Standards and Student Ethics, Jasmin Nunez, to find an effective way of addressing these issues on campus.

“My plans and platforms adhere to most of the students’ concerns and frustrations,” Sharp said. “Whether it is taking a stand against tuition and fee increases or negotiating better methods for expanding the university without causing current students to suffer, my platform will always revolve around the current student body.”

Last year, Sharp served as Vice President of Student Senate, establishing a rapport with students by listening to their concerns and frustrations. Working with Acting President Killingsworth, he mediated the university’s new town hall meetings in the spring.

“I am capable of creating positive change. In the end, I hope that I can be an effective communicator and leader who is able to portray the student body's collective needs in the places it is most essential.”

“I am capable of creating positive change,” he said. “In the end, I hope that I can be an effective communicator and leader who is able to portray the student body's collective needs in the places it is most essential.”

Given the colossal challenges the entire nation has simply rediscovering a sense of normalcy, Sharp said there is not one issue he’s putting above any others.

“There is a sundry amount of issues on campus that affect students, and it’s my job to see those issues resolved,” he said. “All issues matter because all students matter. Every single student’s story is vital to making JSU the awesome university that it is.”

Sharp, 22, is looking forward to strengthening the lines of communication between JSU’s deans and the SGA, making it a two-way street.

The newly appointed Presidential Cabinet is:

Sharp is something of a legacy in JSU politics as his sister, Jesslan, served as SGA president in 2016-2017. When looking for a role model, he didn’t need to look far for inspiration.

“When I was running, she simply supported me and the platforms and ideas I had created,” he said. “She wanted this to be something that I did on my own and made my own as she did four years ago. Even though we have done similar things while here at JSU, we’re also very different. I know that I can always go to her for advice as I face different issues throughout the year.”

Such strong familial political ties places Sharp and his sister in rare company.

“One cool fact about this, though,” Sharp said, “is that Acting President Don Killingsworth and his sister were the first sister/brother duo, and it just so happens that I am the second duo in JSU's history at the same time as his presidency.”

Sharp, who is majoring in biology with a double minor in chemistry and forensics, considers himself to be a “very analytically passionate person” with an interest in policy, science and research. His political aspirations did not begin with the SGA. He was elected to Sylvania Town Council in the summer of 2016 at age 18. He resigned in November 2019 after three years of service to focus on his academic studies as well as his role as an SGA vice president.

“I wanted to defy the status quo that young people were incapable of serving in a serious position such as that one while also inspiring my peers to get more involved in the political world that affects our daily lives,” he said. “This is also why I have been involved with SGA throughout my time here at JSU – to help establish beneficial changes that will more efficiently serve the student body.”

Sharp wants to serve as a champion for diversity. As an openly gay man, he appreciates what that means, but it is only facet of who he is.

“I’ve never been surrounded by so many accepting people before in my life,” he said. “I do not believe people see me only as a gay man. Rather, I think they see me as a friend, a brother – I have to give a shout out to my fraternity, Sigma Nu – and someone who loves this university very much and wants to see it reach its fullest potential every year.”

It is unlikely that Jerod Sharp, JSU’s 72nd SGA president, is the first member of the LGBTQ community to serve in the role. He is, however, one of the only – if not the only – SGA presidents planning to be open about his sexuality while serving in the role. He said he feels accepted among the students he’s been elected to lead and represent.

“I am very grateful that I am able to say that out loud without facing persecution,” he said. “I believe that itself speaks to the progression this university has made, and I am excited to see where we will go from here.”