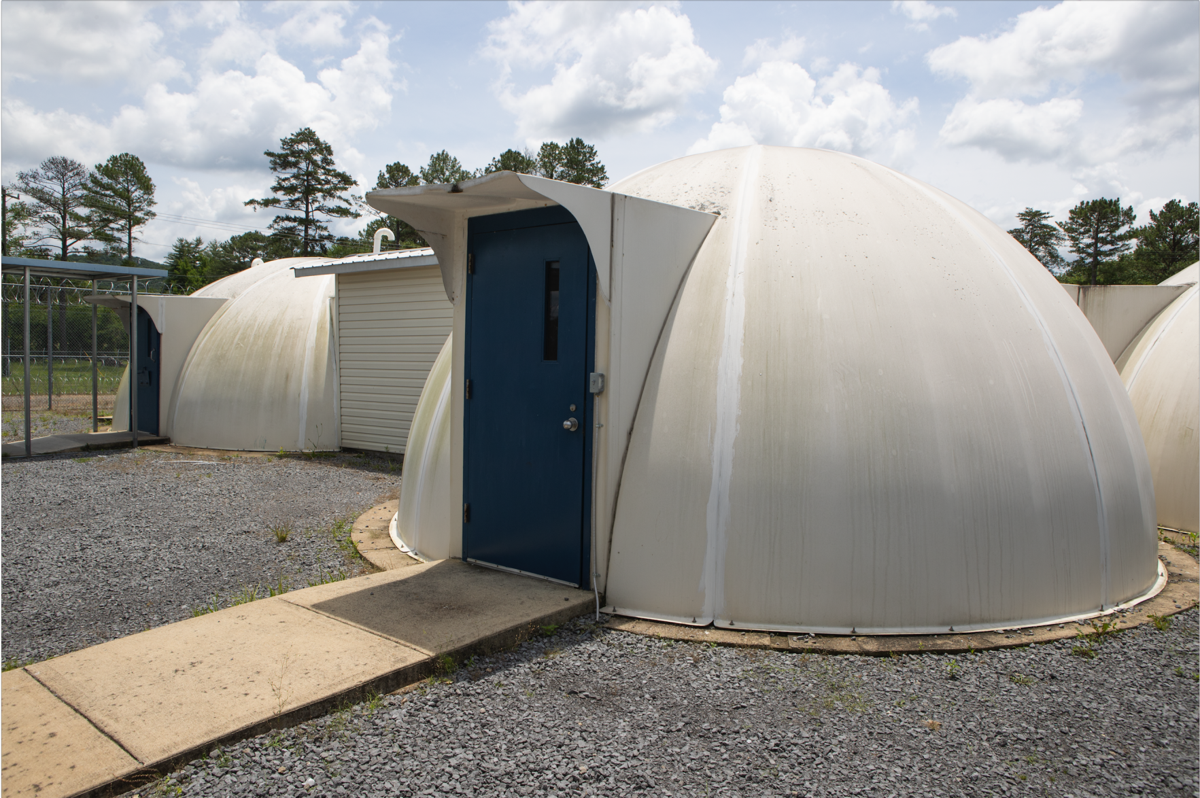 Above are the domes at the DeKalb County Detention Center that were purchased 25 years ago. 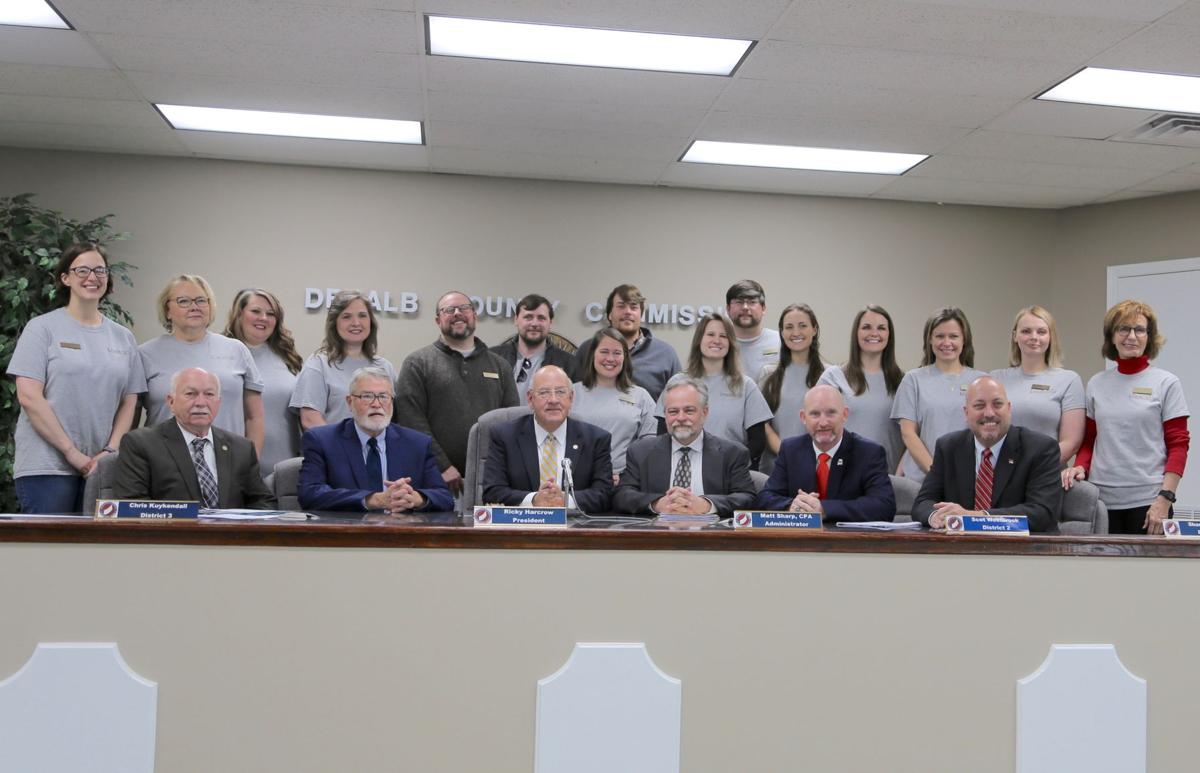 Pictured is the Leadership DeKalb Class of 2020 with the DeKalb County Commission.

Above are the domes at the DeKalb County Detention Center that were purchased 25 years ago.

Pictured is the Leadership DeKalb Class of 2020 with the DeKalb County Commission.

Harcrow expressed his thanks and appreciation towards the DeKalb County Sheriff's Office and personnel for their work and their budgeting.

Administrator Matt Sharp addressed the crowd, saying he has watched some of the series “60 Days in,” filmed in the Etowah County Detention Center. “I would like to say that I appreciate our county and our staff,” he said.

The A & E series places people in jails as undercover inmates and records what goes on behind bars, with only a few staff personnel in the loop.

Commissioner Chris Kuykendall said we are “truly blessed to live in DeKalb County.”

Harcrow spoke briefly of his visits to other counties in the state before announcing the planning of the jail expansion.

Regarding the expansion, he said they are “working on it” and are going to do away with the current domes in the jail.

“Those domes that were bought 25 years ago are falling apart,” said Harcrow.

He said as they proceed on that course, they look forward to its completion.

“Our county is in the [black], and we are going to keep it that way. Those particular items have to be addressed because of federal issues,” Harcrow said.

“I watch social media and I see our sheriff office quite regularly in a very positive manner, and I appreciate that and what you guys do not just the efficiency but the effectiveness of your organization,” he said.

Smith thanked the commission for their support and everything they’ve done.

“I will relay your kind words to our staff,” he said.

Also present during the meeting was this year's group from Leadership DeKalb, a group designed to identify and prepare strong leadership resources within DeKalb County.

“A number of years ago we set this in motion. Since that time, it has evolved into a great program. It’s always different individuals, but you always come out on the other side more informed and more educated in the way leadership must operate,” said Harcrow.

Dave Latham, reverend of Grace Presbyterian Church and spokesperson for the group, addressed the commission regarding the group's project plans.

“We are going to try and do something a little different, a little ambitious but we are really hopeful that it will be a lasting benefit to our county,” he said.

On April 4, the group is set to put in play DeKalb Cares Day. Latham said they hope it will be a new annual day of service county-wide.

He said they are in the process of raising funds to cover some of their supplies and will “kick up” their recruiting for volunteers to come and help pick up litter in several problem spots throughout the county.

“Our hope this year is to impact five or six different projects and places of emphasis around the county,” Latham said.

Among the places, they are planning to focus on is the DeKalb County Animal Adoption Center, CASA, The Father’s House, The Gathering Place and Landmarks of DeKalb County, along with litter pick up throughout the county.

For more information or to volunteer, visit dekalbcares.com.

Regarding the cleanup day, Harcrow announced the month of April is DeKalb County's clean up month.

“The year before last, dumpsters were put out [throughout the county] but because of liability of those being on personal property and company property, we had to seize that,” he said.

He said the Republic Services Sand Valley Landfill located at 3345 County Road 209 in Collinsville would be open on Saturday and Sunday of the first, second, and third weekends in April with dumpsters on the outside for DeKalb County residents who want to carry their throwaway items.

“It won’t cost you anything, we are paying the expense,” Harcrow said.

The commissioners spoke of the littering in the county, conveying their appreciation and thanks towards the Leadership DeKalb group.

He said they have held up “good” through the amount of rain we’ve had, but it’s beginning to cause delays on some of the pipe projects and pipeline projects that need to be done. “I can’t do those kinds of things with this kind of weather and we are not able to ditch,” Broyles said.

District I Commissioner Shane Wootten took the opportunity to thank Broyles and the road department crews for their work. He said in 2013 his first full year in office, they had an extremely wet year and “tremendous” amount of road issues caused by that water.

“Not to say that we don’t have a few issues now, but it has been a great improvement since 2013, and that’s a testament to your leadership and the good job the crews have done,” said Wootten.

• accepted the CRF bid from Corrective Asphalt Materials at $76,551 for the work on various roads in District I.

Wootten emphasized the importance of the treatment of some of the roads they have been able to surface over the last couple of years. “This is going to be very beneficial in holding those surfaces together and helping it last a really long time. I think it’s going to be a very positive thing for our county and the district,” he said.

• approved updates to the 2011 Flood Damage Prevention Ordinance required by FEMA and includes provisions regarding definitions, languages and regulations to provide better enforcement in permitting practices.

“This is just a way to protect not only us but to protect the citizens, to ensure they are not building somewhere that they are unaware could potentially have a problem due to flooding,” said County Engineer Ben Luther.

• awarded ATV bid to Boykin Tractor of Rainsville for $13,675. Harcrow said the funds come from a grant the EMA applied for and that money has to be spent on this particular project. He said it doesn’t cost the county anything.

• approved to hire Justin Bailey as a full-time corrections officer.

Partly cloudy skies this morning will become overcast during the afternoon. High 71F. Winds NNW at 5 to 10 mph.

Showers this evening, becoming a steady rain overnight. Low 48F. Winds light and variable. Chance of rain 100%. Rainfall near a quarter of an inch.

Showers this evening, becoming a steady rain overnight. Low 48F. Winds light and variable. Chance of rain 100%. Rainfall near a quarter of an inch.

A few clouds from time to time. Low around 40F. Winds light and variable.

Partly cloudy skies during the evening will give way to cloudy skies overnight. Low 46F. Winds light and variable.