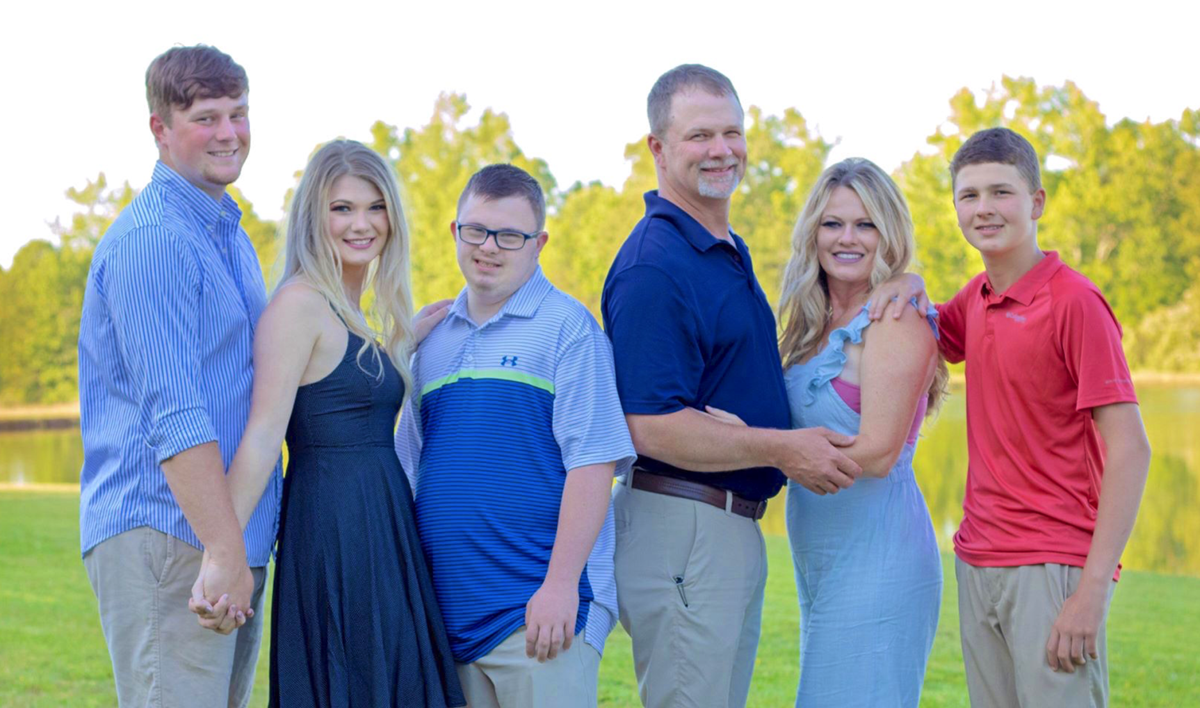 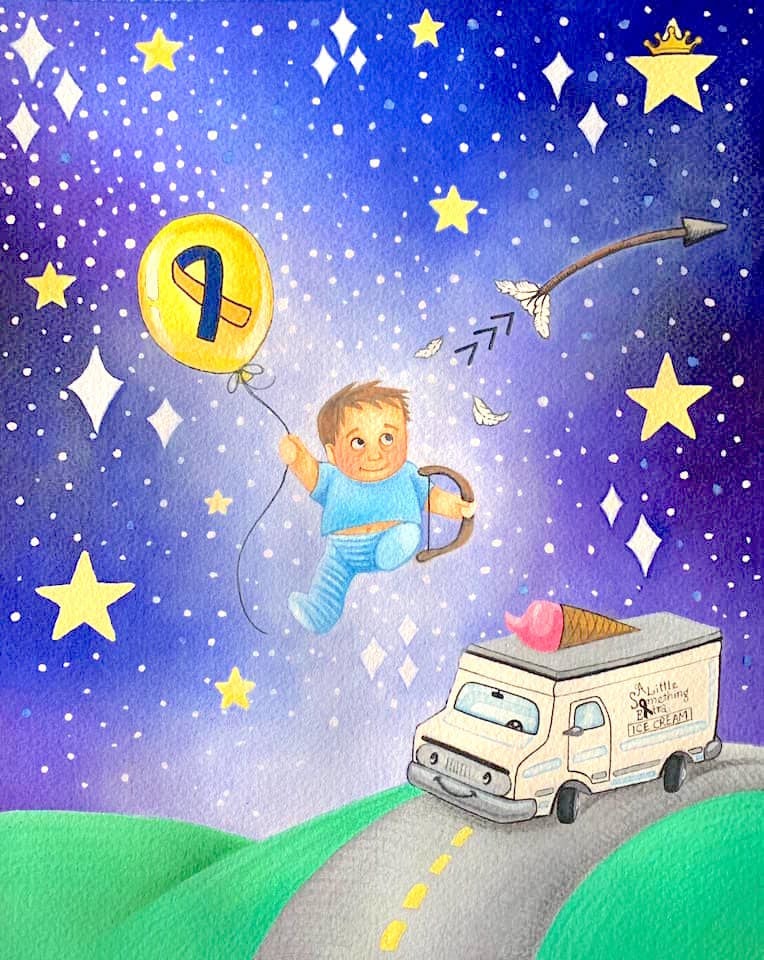 The cover of Norwood's book, illustrated by Ashton Smith. 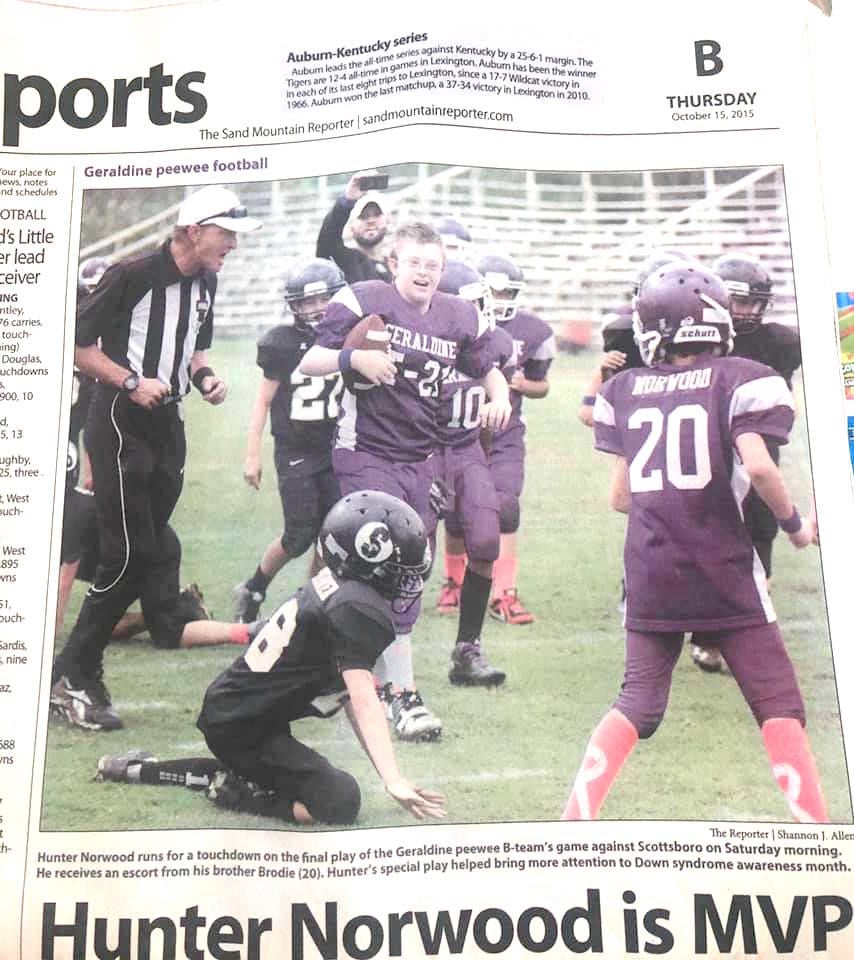 Pictured above is Hunter Norwood running the final play at the Geraldine peewee B-team game in 2015.  The excerpt is from The Sand Mountain Reporter, The Times-Journal's sister paper, in Albertville. 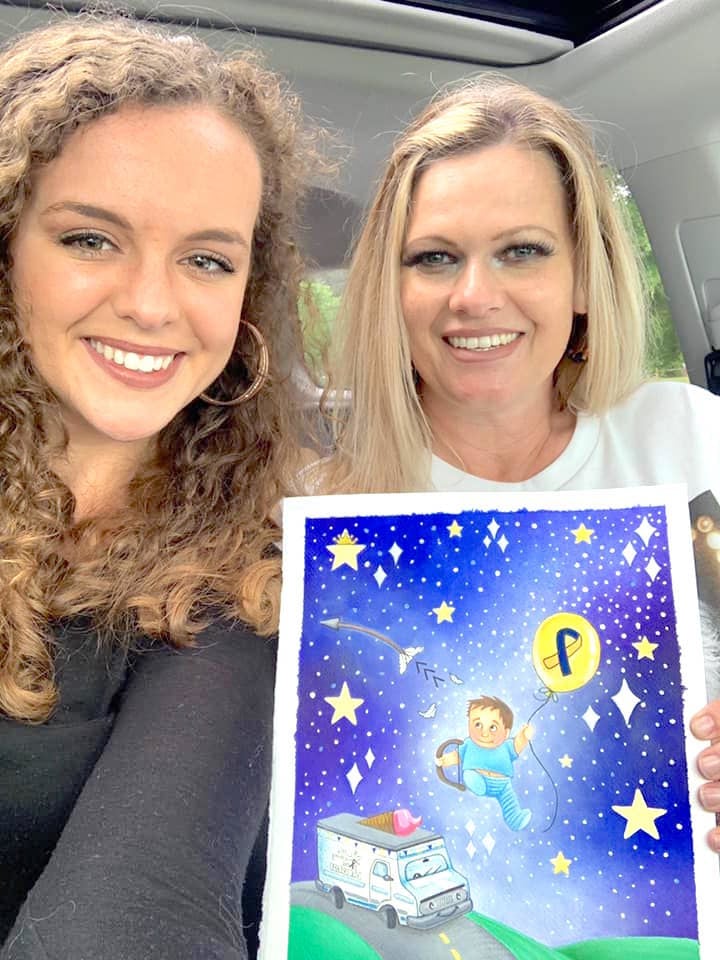 The cover of Norwood's book, illustrated by Ashton Smith.

Pictured above is Hunter Norwood running the final play at the Geraldine peewee B-team game in 2015.  The excerpt is from The Sand Mountain Reporter, The Times-Journal's sister paper, in Albertville.

Michelle Norwood, wife, mother and educator from Geraldine, announced the up and coming publication of her book “Stars In My Eyes” last week via a post on Facebook.

The soon to be published book follows the journey of her son, Hunter Norwood, through various milestones of his life.

Hunter, 19, was born with Down Syndrome, genetic disorder caused when abnormal cell division results in extra genetic material from chromosome 21. As stated by the cdc.gov, the extra chromosome changes how a baby's body and brain develop, which can cause both mental and physical challenges.

Hunter, a member of the 2020 Geraldine senior class, received recognition in 2015 for his winning touchdown play at a peewee football game between Geraldine and Scottsboro.

“That touchdown event has been recreated in the book,” Norwood said.

Norwood said the inspiration for the title of the book came from one of the markers exhibited by individuals with Down Syndrome known as Brushfield Spots.

Although some people who don't have Down Syndrome also have Brushfield Spots, it's considered one of the markers for Down Syndrome, and it's visibly more noticeable with people who have light colored eyes, she said.

According to Norwood, when you look into Hunters' eyes, it looks like “you’re looking through a prism.”

“It’s like looking through a kaleidoscope, it's beautiful and so the book is titled ‘Stars In My Eyes,’” she said.

She said the narrative follows Hunter’s life from infancy through young adulthood and discusses how and why the stars in his eyes are a “great” reminder that he has a purpose and potential in life.

During her phone interview with The Times-Journal, Norwood discussed the many reasons that inspired her to write the book. She said the book is easy enough for children to understand but enjoyable for all ages and tested on a 4th grade reading level.

“I’ve always tried to advocate for Hunter in many ways. I wanted to give him opportunities that he may not have otherwise but also advocate for people with disabilities,” said Norwood.

She said she hopes to show how much potential and purpose children and individuals with Down Syndrome and disabilities have.

“It’s also for the families because I’ve seen first-hand sometimes when you're chosen to raise a child with disabilities, at times it can be very lonely. You feel isolated, and I want to give parents hope that there is such a beautiful life ahead,” said Norwood.

She said some of the “most wonderful friends” they’ve ever made came through their journey with Hunter's diagnosis.

“We have friends outside of the Down Syndrome community who are wonderful, but we have made so many wonderful friends through this journey. It's friends that I probably would not have had otherwise, so there’s a whole lot of purpose to the book,” said Norwood.

She said there are a lot more wonderful moments than there are bad and isolated ones. In her book, she highlights some of the real-life events from Hunter’s life to provide an insight to show that “it’s a beautiful ride.”

“We also want to advocate for choosing life when people receive a diagnosis while being pregnant. I want them to know that just because you find out your child has an extra chromosome, it’s not a death sentence,” said Norwood.

She said it’s actually a “life sentence,” and what she means by that, is it makes your life “so much better.”

“We feel like we are the chosen few. Having a fear when your baby is born with uncertainties is completely natural because a lot of times, health conditions do come along with that diagnosis,” Norwood said.

Thankfully, for the Norwood family, Hunter did not have health conditions. Before his birth, the family mourned the loss of their second daughter Victoria who passed away at six days old due to a heart defect.

“There for a while, it was a really dark time for our family. We were just filled with a lot of uncertainties but wow life has gotten very precious, and I know now that that extra chromosome was God’s wink. He gave us that blessing for a reason,” she said.

Norwood said at the end of the book she plans to have a list of multiple resources, including the National Down Syndrome Society, along with various websites that people can reference to learn about Down Syndrome and other exceptionalities.

According to Norwood, Hunter's older sister, Hope Norwood Guffey, and younger brother, Brodie, have always been involved in activities and she and her husband Anthony have also tried to keep Hunter engaged.

Five years ago, when his younger brother Brodie was playing peewee football, his coaches decided to let Hunter dress-out for Down Syndrome Awareness Month in October.

“He was able to run the final play for a touchdown and that made a lot of headlines. It was great for Hunter and great for us too because that was something we were afraid we might never see,” said Norwood.

Norwood said she had looked into all avenues. Because she holds a degree in business before returning to school to become a special education teacher, she was always thinking about what kind of business they might create for him.

“In the course of actually being a special education teacher, my students ran the break-store at the school and I saw that that type of work was something that really worked for them,” she said.

Norwood noted her students' participation in the break-store not only helped them socialize with classmates they might have never talked to otherwise, but it also helped them learn money and organization skills.

“It just brought a lot to the table, so through that, I truly believe it was God who gave me the idea to create A Little Something Extra Ice Cream truck for Hunter,” she said.

Joining Hunters' character in Norwood's book will be a variety of children and young adults who are part of Hunter's ice cream truck, who represent various 'exceptionalities', not only Down Syndrome.

According to Norwood, once she had written the book, she posted a post on Facebook asking assistance in finding an illustrator for her project and she revised an outpouring of suggestions.

‘Stars In My Eyes,” is illustrated by Ashton Smith of Arab.

“I finally had it narrowed down to about three illustrators. I met Ashton one day and I knew from the minute we talked that she was the one who needed to do it,” she said.

Norwood said Smith has a heart for ministry, mentoring and a love for all people.

As part of the book, Smith, the illustrator and Norwood held a “paint party” with all these “exceptional” children and young adults. They painted their own version of the painting “Starry Night” by Vincent van Gogh, which will be showcased in Norwood's upcoming book.

“We are going to have those pictures in the book so that these kids can add “illustrator” to their resume and say they helped illustrate a book, and I am really excited about it,” said Norwood.

‘Stars In My Eyes” does not have a set release date yet due to the COVID-19 pandemic causing delays. However, Norwood said they hope to have the first run of the book out by mid-summer, sometime around early July.

“One of the things that Hunter has been really excited about, which really cracked me up because I don’t know that we’ve ever talked about this, but he wants to do a book signing once the book comes out,” she said.

When asked how Hunter feels about being illustrated in a book Norwood said he “loves it.”

“He said, ‘does that look like me?’ I said well, you’re not a cartoon but yes, it does favor you,’ she said.

Norwood credits Smith for doing a great job of illustrating and creating the characters for her book.

“Hunter can look at the illustrations and tell which worker from the ice cream truck each one is and I think that’s really neat,” she said.

Stars In My Eyes will be available on Amazon and upon request via email at extraicecream@yahoo.com, Facebook and their ice cream truck.

Norwood said they are in the process of building a website for A Little Something Extra Ice Cream, where the book will also be available.

As Hunter prepares for graduation that's been postponed until July due to the coronavirus, his family hopes to celebrate yet another milestone.

“He’s been counting down to May of 2020 for years. His brother and sister absolutely adore him and if they could change him, they wouldn’t because he has made them better people. He has made us all better.” said Norwood.

The ice cream truck, like many businesses throughout the county, has been closed during the coronavirus crisis; however, it reopened this week.

“We had masks made and we sanitized like crazy and are limiting the number of people. We are opened for business now and we are operating as safely as we can,” said Norwood.