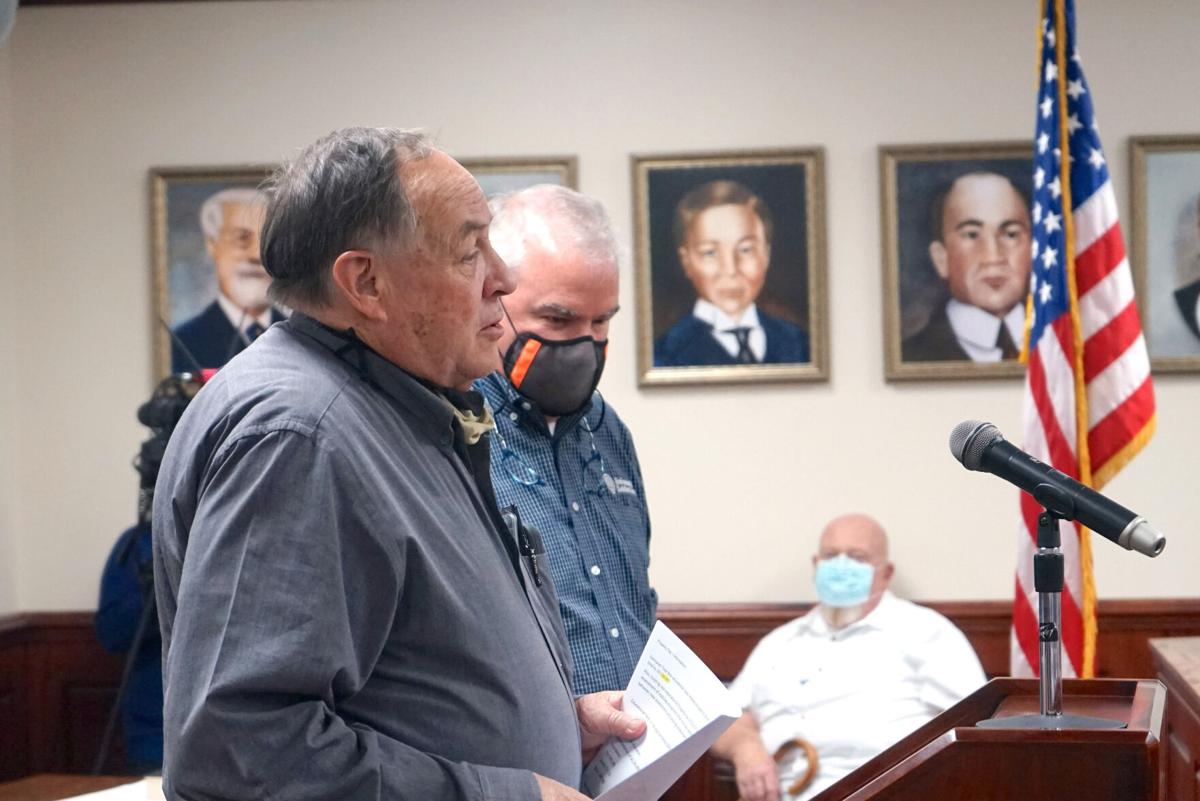 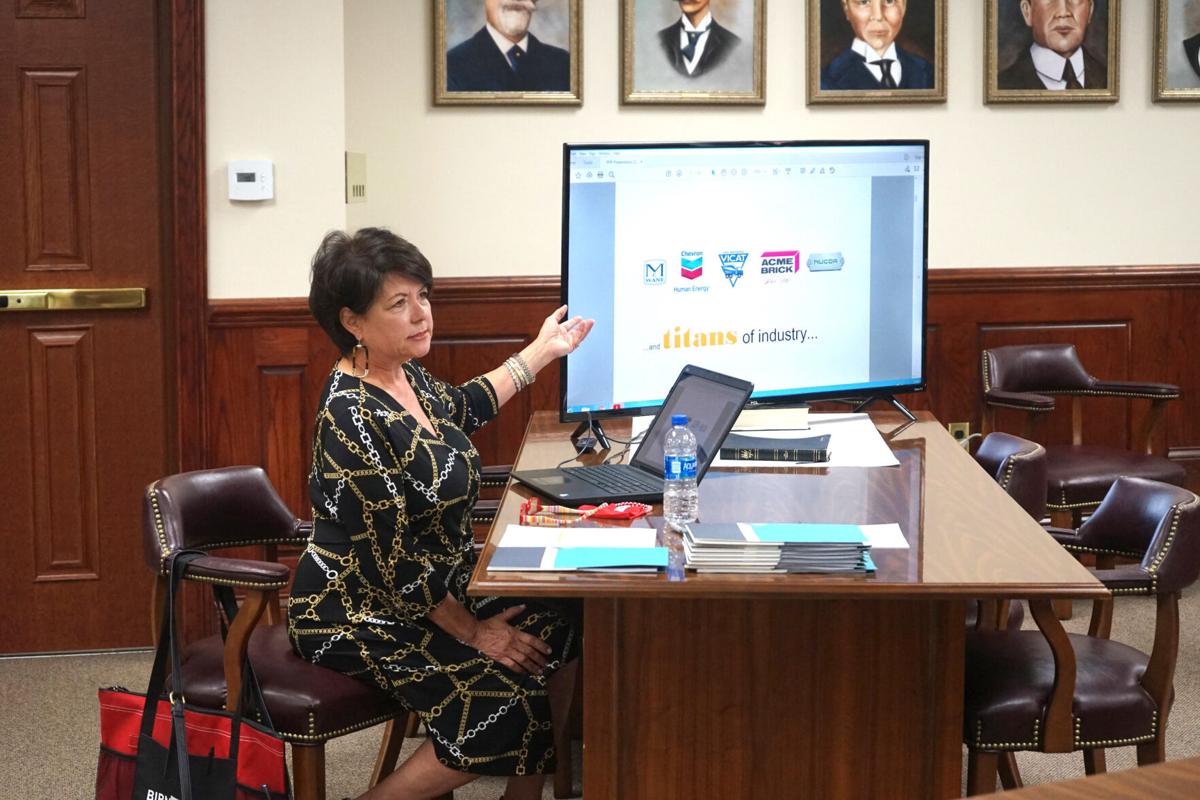 Darlene Rotch of Panorama PR gives a presentation to the Fort Payne City Council during Wednesday’s work session at City Hall. She submitted a proposal on redesigning the city’s website and managing its social media messaging across platforms, but the gathering was informational and no action has been taken on the matter.

Darlene Rotch of Panorama PR gives a presentation to the Fort Payne City Council during Wednesday’s work session at City Hall. She submitted a proposal on redesigning the city’s website and managing its social media messaging across platforms, but the gathering was informational and no action has been taken on the matter.

The Fort Payne City Council returned to live meetings on April 6 and approved a resolution to grant a tax abatement to Heil Co. so the company can move forward with plans to modernize locally. They also discussed the status of demolishing the old DeKalb Hospital and recognized the local Marine Toys for Tots program. At a work session the following day, they discussed a city social media policy and steps needed to recruit another new restaurant.

DeKalb Economic Development Director Jimmy Durham said Heil has been a great corporate citizen since arriving in 1973. The company now wants to invest $42.3 million and sought the abatement of $430,000 in non-educational taxes. The Council passed the resolution authorizing Mayor Brian Baine to enter into the agreement.

“Fort Payne and Heil have had a really good relationship for 50 years,” said Ken Chandler, VP of Operations & Supply Chain for Environmental Solutions Group. “The investment we are looking at making will really anchor us here and allow us to modernize. The trucks we are building today are more complex than the ones we made five to seven years ago. They’ve become very complex with a lot of sensors and data. We need to change our manufacturing process, phasing over the next three to four years. This will allow us to deliver the best trucks in the business and grow over time.”

At the request of Fort Payne Improvement Authority Manager Mike Shirey, the Council suspended its rules to pass an ordinance on first reading that gives the city more control as it relates to a Senate bill granting rights of independent companies to install small cell equipment on utility poles on municipal right-of-ways. They also announced that FPIA has applied for charging stations for electronic vehicles.

Baine announced that progress toward the demolition of the old hospital continues with the finalizing of mortgage records so the city can begin foreclosure ahead of demolishing the dilapidated structure. City resources used to remove debris can count toward the city’s match of 20% on a $400,000 grant. Baine said the city may have to come up with additional funds to finish clearing that property. Great care must be taken due to the presence of asbestos.

This led to a general discussion about cleaning the city as a whole, possibly increasing enforcement of ordinances if necessary. Baine reminded citizens to pull their garbage containers back from the roadside after contents are collected and to bag all garbage instead of putting loose items inside, which are more likely to blow out and litter the streets.

Baine thanked city employees for the teamwork demonstrated during the recent flooding.

• received plaques of appreciation from the Marine Corps Toys for Tots. LaRue Hardinger, representing the N.E. Alabama Marine Corps League Detachment 1404, thanked the city for providing a space for donated toys to be brought, sorted and bagged. She said 1,249 children were served in 2020 and 7,422 have been served since their first local campaign in 2013. She said they welcome donations at http://fortpayne-al.toysfortots.org. Look for more information and photos in a future edition of The Times-Journal.

• announced the expiration of Kathy Prater’s term on the Fort Payne Board of Education. Interested parties should apply before April 14.

• approved a $1,200 appropriation for the Fort Payne Track Team to cover the costs of hosting a meet locally.

• approved a budget adjustment of $2,100 to purchase a replacement washer and refrigerator for the Fort Payne Fire Department.

• heard an update on the potential lease of the DeSoto Golf Course to a third party.

• heard an update on planned renovations to the interior of the old City Hall, which now accommodates the police department.

• held an executive session to discuss trade and commerce.

At Wednesday’s work session, the Council heard a proposal from Darlene Rotch of Panorama PR to enhance the city’s online presentation. She pitched a marketing strategy as part of outreach efforts.

They also heard from Scott vonCannon, a representative of real estate recruiter Retail Strategies, which seeks an eight-year sales tax-sharing agreement as incentive for a new, unspecified restaurant to build up the property and occupy the county-owned lot where the former tourism and economic development office was located before flooding in 2020.

Mostly cloudy in the evening then periods of showers after midnight. Low 51F. Winds light and variable. Chance of rain 40%.