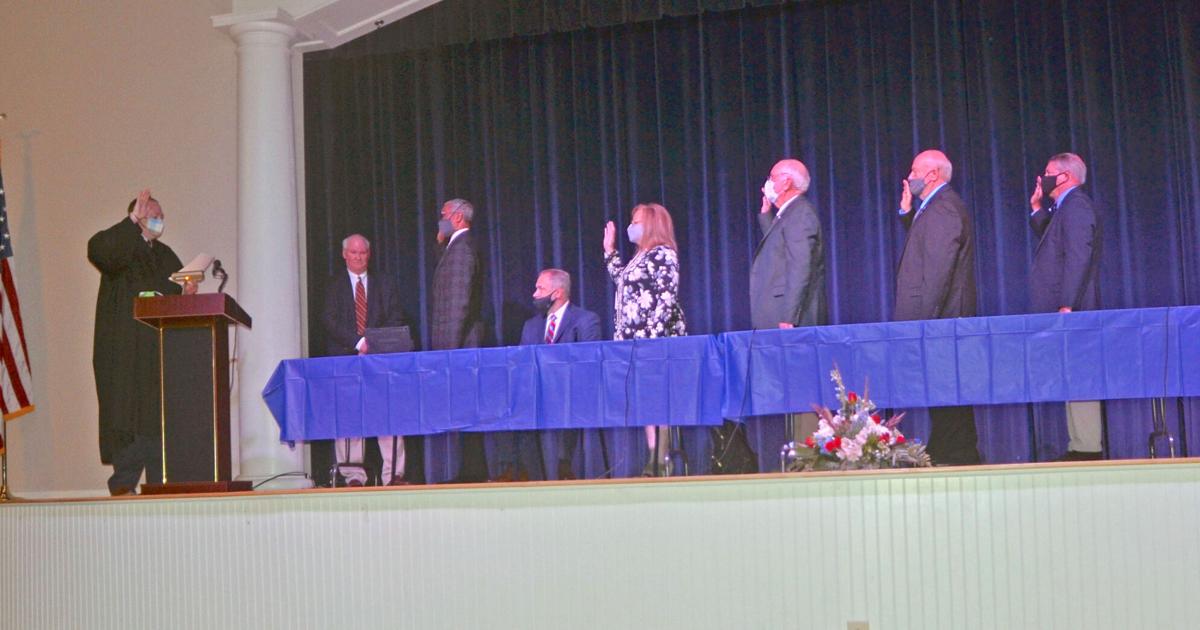 Mayor Brian Baine and members of the Fort Payne City Council were officially sworn in Monday during an organization session at the city auditorium. Judge Andrew Hairston, himself a former Councilman, administered the oaths of office to Baine and Council members Lynn Brewer, Johnny Eberhart, John Smith and Phillip Smith and Walter Watson.

Baine thanked outgoing Mayor Larry Chesser for his service to the city and said he is looking forward to the next four years.

“We consider ourselves a team, and it’s not a team of five members. It’s a team of this whole city and every individual employed by the city of Fort Payne is part of it,” Baine said. “My job is to work together with every member of that team to have a successful outcome. Together, we do that. It’s not always going to be a bed of roses. There’s going to be storms that come, but know that there is sunshine after that. I encourage everyone to get onboard and be a part of that team because together we can.”

They voted to move council meetings to 1 p.m. on every second and fourth Tuesday, with John Smith voting no and stating that he had talked about moving council meeting back to evenings while campaigning. Watson thanked him for voting his conscience and encouraged the council to keep doing so, encouraging transparency.

• set a council work session for Nov. 10 at 12:30 p.m. Watson said the council will discuss broadcasting council meetings with FPTV and narrowing top projects down to five on which to concentrate.

• set Monday, Nov. 9 at 11 a.m. as the time to interview the eight applicants competing to fill one vacancy on the board of the Fort Payne Improvement Authority.

• announced six vacancies on the DeKalb/Cherokee Gas Board and set the date until people can apply as Nov. 10.

• voted to suspend the council’s rules and approve Ordinance 2020-09 on first reading to change the intersection of Fourth Street North and Grand Avenue North (located behind Hammer’s store) as a four-way stop, as recommended by the police.

• voted to designate the police chief and fire chief as officers of the city. Parker said this was done to clear up some ambiguity.

• discussed council committees and clarified that these are not intended to manage departments, which is the job of the mayor and department heads.