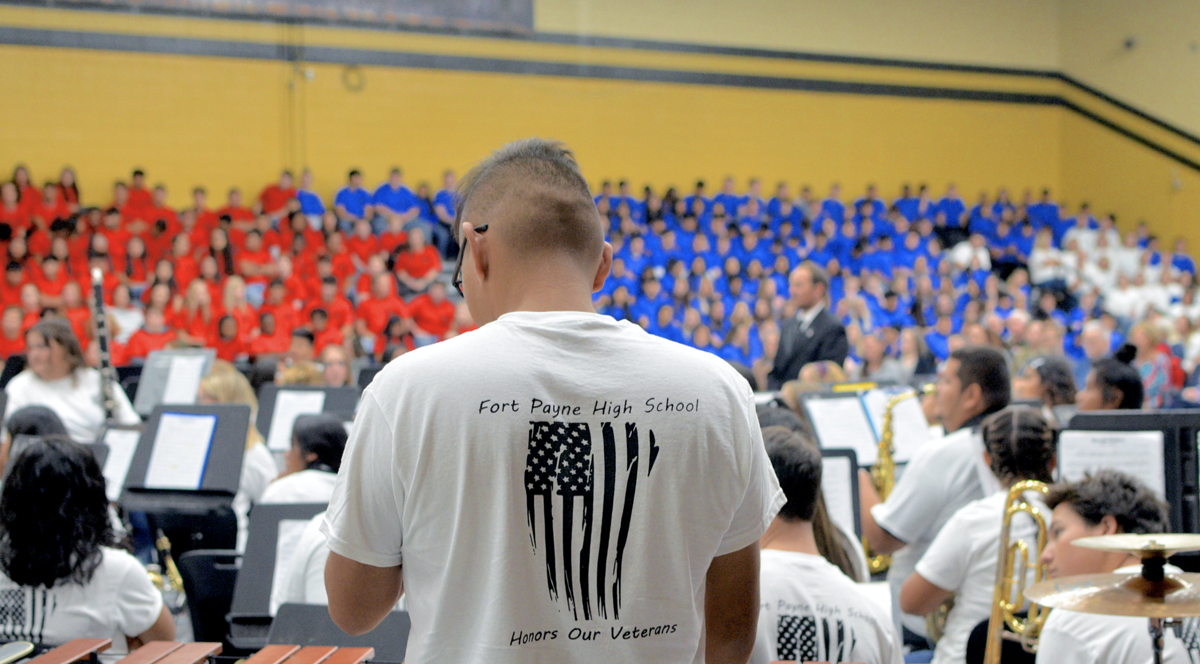 For 20 years, Fort Payne High School has honored local veterans with a program to commemorate Veterans Day. That tradition continued on Tuesday as the 20th Special Forces Group set up static displays of their equipment on campus and the school welcomed a guest speaker, Chief Master Sergeant Eric Dudash, Retired US Air Force, who lives in Mentone.

Chief Dudash, who took part in 17 deployments including every conflict since Desert Shield/Storm, Iraq, Afghanistan and other engagements, spoke with authenticity on the sacrifices made by America’s fighting forces.

He became emotional reflecting on the display of students dressed in red, white and blue shirts, showing respect to the visiting veterans from different services, including some in their 90s who participated in World War II. The band and student-guitarists from the Arts in Education program offered a showcase of music as JROTC students, dressed in uniform, performed ceremonial drills.

“If this does not get you fired up, I don’t know what will,” he said. “I’m proud to see the patriotism and the respect that you are showing. It is overwhelming. It shows how much you appreciate our veterans.”

He held up a flag patch that his parents gave him when he enlisted in 1988.

“I carried it with me on every deployment, every mission, and I’m sure every one of the veterans here did something similar to remind them of home while serving abroad,” he said. “This flag is weathered. It’s faded. It’s got some frays on it. But this weathered, frayed flag means so much to me. Every time I looked at it, this symbol lets me know why I was doing what I was doing. It reminded me that it is bigger than me. It reminded me that we live in the best darn country in the world, absolutely.”

He told the students the red in the flag symbolizes strength and valor, white represents purity and innocence, and blue stands for vigilance, perseverance and justice.

“These qualities describe the weathered American veteran,” he said. “I get choked up because our veterans have done everything, and they’d do it again to support our freedoms, our way of life, and ensure that our country remains the best. That’s why we honor veterans today. We’ve seen evil in other countries, just because they disagree with us. We’ve seen people persecuted just because they have a different belief. But I will assure you that every American veteran carried a flag into battle to let everyone know that we had something bigger than us at our six. I can’t thank you enough today for having our backs. We may be weathered, we may be frayed, but you’ve shown us that our veterans are appreciated.”

He urged the students to remember that they don’t have to serve in the military to be a patriot.

“You doing what you are doing today, wearing the colors and saluting our veterans, flying the flag every day, that’s a patriot. You remaining quiet during the national anthem and looking at that flag, reflecting on the price that was paid for your freedom, that’s a patriot. Being a patriot comes from the heart, and don’t let anyone take that from you.”

Lt. Col. John M. Walker, US Army retired, the school’s senior JROTC Army Instructor, is a veteran of 28 years himself, and he said the program is one of the highlights of the year.

“It is one of the most impressive displays of patriotism by high school students and staff that I have ever witnessed,” he said. “Each year, our veterans have high compliments for the respect and honor our students show them on this special day.”

Walker made a point of recognizing Chief Dudash’s wife, Barbara, and all spouses and family members.

Fort Payne Mayor Larry Chesser also briefly addressed the crowd, saying the video games advertised on TV frequently portray warfare, but such simulations popular with teenagers fail to convey the reality of fighting in an actual battle. He urged students to reach out to relatives who’ve served in the military to get a sense of what they actually experienced in combat.

The FPHS JROTC Color Guard carried demilitarized M-1 Garand rifles, which are familiar to many of the veterans who carried it through WWII, the Korean War, or trained using it.

“When the color guard hands one of these old rifles over to a veteran, you can see the pride they experience and the delight they have in reminiscing about their history with the M-1 Garand,” Walker said. “One year, a Korean War veteran actually field-stripped [took apart] the color guard’s M-1 with speed and precision just like he had learned years ago in basic training. I was very happy that he also remembered how to put it back again.”

Partly cloudy in the evening then becoming cloudy with periods of rain after midnight. Low 46F. Winds S at 5 to 10 mph. Chance of rain 90%. Rainfall around a quarter of an inch.