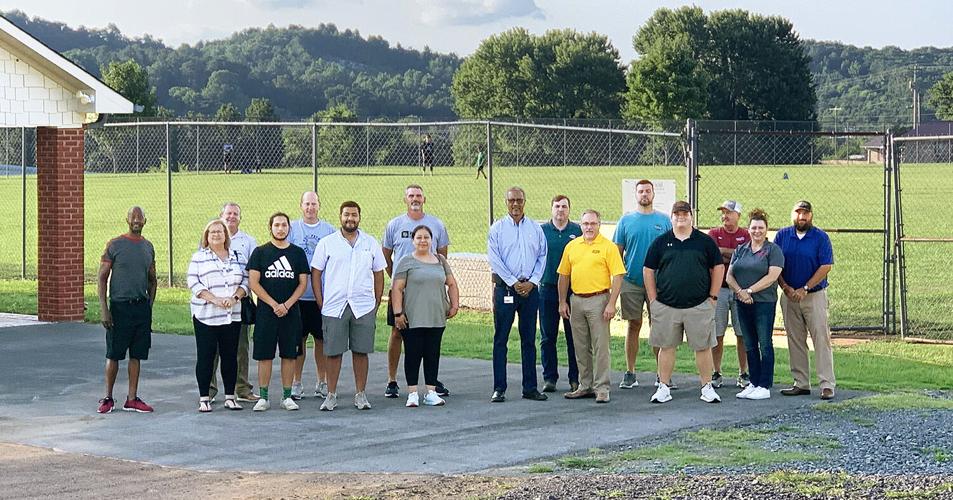 A group gathered at the Wills Valley Recreation Center Monday evening to talk about adding basketball courts throughout the city. One is planned over the next few weeks outside the Rec Center beside the Kiwanis building with public restrooms and a soccer field. 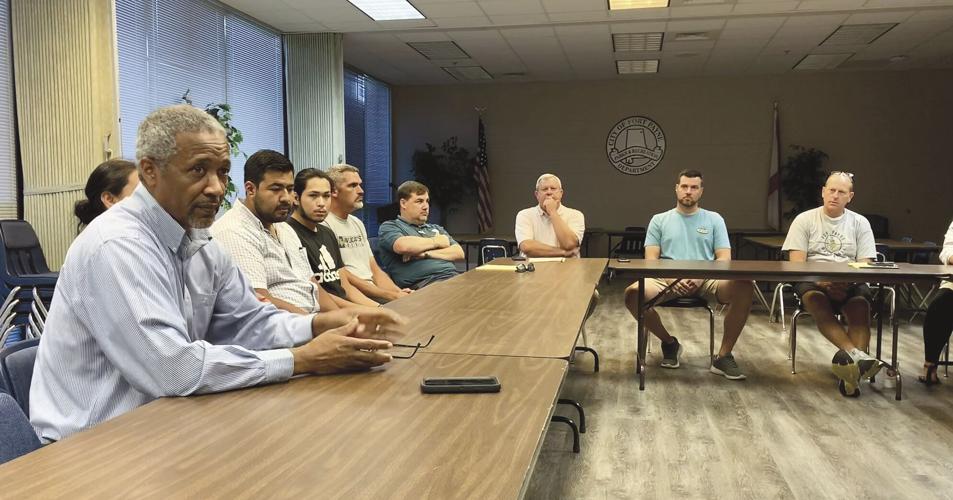 A group gathered at the Wills Valley Recreation Center Monday evening to talk about adding basketball courts throughout the city. One is planned over the next few weeks outside the Rec Center beside the Kiwanis building with public restrooms and a soccer field.

A group consisting of city officials, local school officials and coaches, city employees and citizens met Monday to talk about installing at least three new basketball courts in Fort Payne where anyone can come to play for free.

City Council President Walter Watson said he’d been asked numerous times about adding basketball courts and found great demand for one after he personally installed a net on the side of his church building. A neighbor asked that it be taken down, though, due to disruptions caused by pick-up games, when people spontaneously showed up and started playing for fun.

He said young people typically show up to play outdoor games after the sun sets during the summer months because it is cooler. Thus lighting is critical to be able to see, as well as preventing any vandalism by regularly having police to patrol the area.

The City is actually a couple of weeks away from having a completed outdoor 50-foot by 100-foot paved basketball court outside the air-conditioned Wills Valley Recreation Center.

The group discussed putting courts in the middle of the city and also on the south end, possibly in the Douglas community. They may also use the space where the old hospital was recently demolished, although they need state regulatory approval to put anything there. Spring Grove Park was another space being considered but also involves the state. Shorter term, they might just put up some goals in strategic spots, then follow up with dedicated, paved courts with lighting and fencing, as well as surveillance cameras to keep any mischief to a minimum.

There are courts inside the Rec Center, but a fee is charged for their use to help offset the costs of operating and maintaining that facility. The city also shares the gym floor with Wills Valley Elementary during the daytime hours.

d that not everyone can afford to pay a fee to play inside, but citizens who can’t or don’t want to shouldn’t be penalized.

“It bothers me that we have nothing to offer our youth,” Baine said, after hearing reports that young people are actually traveling to nearby cities just to use paved outdoor basketball courts. “It’s good for kids to be outdoors and getting exercise. I think having things for them to do keeps young people wanting to stay here and avoid getting into any trouble.”

Baine acknowledged that Fort Payne now lacks entertainment venues such as a movie theater or bowling alley, although Watson passed along plans by the owners of the current movie theater to reopen after finishing their renovation. Baine said he’s met with some different entities about possibly bringing some things to Fort Payne, but the City has a limited scope as far as what private investors choose to build in a marketplace.

Fort Payne Superintendent Brian Jett expressed great excitement with the momentum to add basketball courts and recalled playing pick-up games himself when he was a young man. When adding courts, he said the surfacing, drainage after rainfall, lighting and fencing are important aspects to consider.

Banks said the independent play time can only help to develop young players who can improve the level of athletic talent, which can lead to scholarship opportunities for the city’s youth.

“This will definitely help my program and also get these kids outdoors,” Banks said. “It’s been two or three years since we had the last group of players who grew up playing on courts around town in their free time. It’s a good recruiting tool for me to have this.”

Sparks said he’s excited about the prospect of adding basketball courts and hopes the enthusiasm isn’t hurt once someone inevitably damages one of the goals since people don’t always make the best choices.

Watson joked that slamming the basketball in the goal in an aggressive way is sort of the point of playing and will happen. So installing durable backboards and goals is important for them to last.

Watson said citizen participation is key as neighbors tend to keep a watchful eye on facilities if care is taken to put them in areas where they add to a neighborhood rather than causing disruption.

He’s already received a $10,000 commitment for the project and thinks citizens would gladly pitch in to make it happen.

Developing recreational opportunities is part of the long-term plan the City is putting together over the next several months.

Baine said a citizen involvement event will happen soon to get feedback on what the people want in Fort Payne.

“Having a plan and doing due diligence is important if we want to get grant money to do some of these things. We don’t want to do it in a haphazard way,” Baine said.

Public Works Director Tim Williams said the best time to build new courts is in the fall with paving done in the spring. Fort Payne only has a couple of weeks remaining in the current paving season.

Council President Pro Tem Lynn Brewer, Council member John Smith attended the meeting, along with Parks and Recreation Director Brant Middlebrooks and Assistant Director Robin Brothers and Aquatics and Athletics Director D.J. Rector. Each offered positive feedback and recommendations. It was suggested they approach GameTime to donate anything to the courts.

Brewer said adding the courts is “an easy win for the community” and called the installation of the new courts a priority for the city to make happen.

Mostly cloudy with showers and a few thunderstorms. Low around 65F. Winds light and variable. Chance of rain 50%.