Locals groups and individuals gathered last Friday morning to pay respect to the lives lost 20 years ago on Sept. 11, 2001. 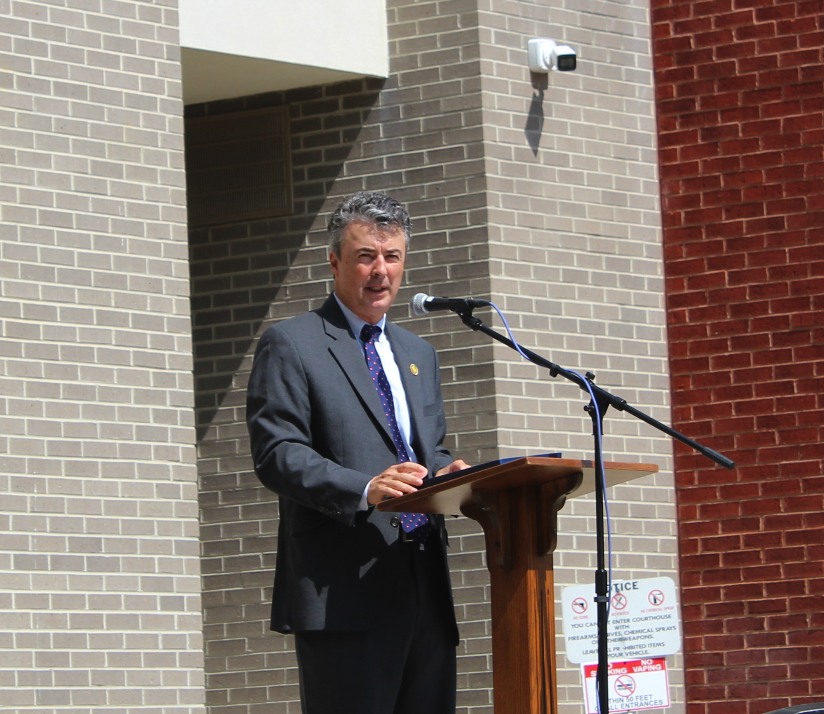 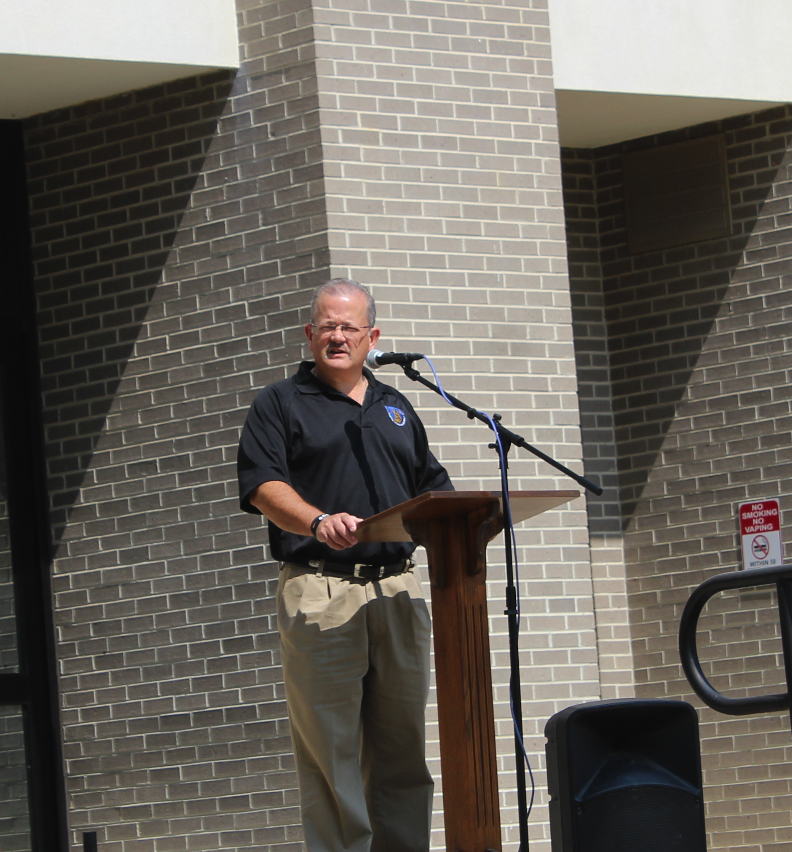 Craig White opens the ceremony, recalling his own memories on 9/11.

Locals groups and individuals gathered last Friday morning to pay respect to the lives lost 20 years ago on Sept. 11, 2001.

Craig White opens the ceremony, recalling his own memories on 9/11.

DeKalb County first responders and citizens who support them gathered at the courthouse in Fort Payne Friday to once again honor the nearly 3,000 lives lost in the terrorist attacks 20 years ago.

The Fort Payne Police Department presented the colors while Georgia Williams sang the national anthem and a bagpipe performance of “Amazing Grace” by Mark Fulgumn concluded the ceremony.

Alabama’s 48th Attorney General Steve Marshall was the guest speaker. He recalled how 19 al-Qaeda terrorists hijacked three U.S. airliners and flew them into the World Trade Center and the Pentagon. Passengers stormed the cockpit of a fourth airliner, causing it to crash in a field near Shanksville, Penn. rather than allowing the hijackers to take more lives at the U.S. Capitol or the White House.

“The emotion, the resolve and the sorrow summoned from within us is not limited to a single day,” Marshall said.

Marshall said the events were similar to the sneak attack on Pearl Harbor and incited America into another global war.

“For our generation, the tragedy of September 11th has become the focal point of America’s indomitable spirit to rebuild and overcome any adversity. It is both a time of sadness to reflect on the lives lost and also a time of re-dedication to patriotism and America’s promise of freedom. The dark memory of those tragic hours still resides in our minds. What we witnessed was stunning. Citizens of 78 countries died in New York, Washington D.C. and Pennsylvania.”

Marshall listed the names of 10 Alabamians who died that day. Another 3,576 Americans died and 19,950 were wounded in the 19 years and 11 months of war that followed.

Coalition forces initially pursued the Saudi-born mastermind of the 9/11 attacks, Osama Bin Laden, who was killed in 2011 by U.S. Navy SEALs while hiding out in Pakistan. History will reflect that Bin Laden sought to expand Sharia law across the Islamic world through violent jihad and attacked civilians in the acts of terror to lure the United States into a long war of attrition in Muslim countries, which he believed would result in economic collapse.

Marshall said he participated in watching some of the jihadists on trial while visiting the Guantanamo Bay detention camp in Cuba, where the U.S. has detained 780 prisoners since 2002.

“We need to continue to find justice for the families who lost what was precious to them on that fateful day,” he said. “All of us who are gathered here today have not forgotten the thousands who were murdered that day, nor have we forgotten the selfless sacrifice of the thousands more military personnel who have taken the fight to the terrorists for the last 20 years. Yet there is a sense that many, especially our leadership in Washington, have lost sight of these sacrifices. I don’t have to remind you of the events of the last few weeks and how many Americans are disturbed by how our leadership withdrew our troops from Afghanistan. The terrorists will look for every opportunity to attack our country again.”

Marshall criticized the August 31 withdrawal of U.S. troops from Afghanistan, where more than 775,000 U.S. service members deployed to that country at least once in the country’s longest-running military conflict. The “War on Terror” began ending with the February 2020 Doha Agreement in which the Taliban pledged to prevent al-Qaeda from operating in areas under its control.

Marshall said the nation is now deeply divided along ideological lines, unlike the unity that was experienced in the immediate wake of the 9/11 attacks.

Craig White, pastor at Pisgah Baptist Church, helped to lead a ceremony on Sept. 12, 2001 to pray and remember the lives lost just one-day prior.

The annual memorial services ended following the 2013 observance, but White, who is now retired from the DeKalb County Sheriff’s Office, resumed it again in 2019 to remind DeKalb County of the sacrifice made by the nation’s first responders. Among those killed in New York City on 9/11 were 343 firefighters from the 75 responding firehouses, 60 police officers and 8 paramedics. Many others have since perished from sickness after clearing the catastrophic debris to search for survivors.

“As we continue to honor these brave folks, the enemy does not win,” White said.

Some clouds this morning will give way to generally sunny skies for the afternoon. High around 70F. Winds WSW at 5 to 10 mph.

Rain showers in the evening will evolve into a more steady rain overnight. Low near 55F. Winds SSW at 5 to 10 mph. Chance of rain 90%. Rainfall around a quarter of an inch.

Rain showers in the evening will evolve into a more steady rain overnight. Low 39F. Winds SE at 5 to 10 mph. Chance of rain 80%. Rainfall around a half an inch.

Periods of rain. Low near 45F. Winds light and variable. Chance of rain 70%. Rainfall near an inch.