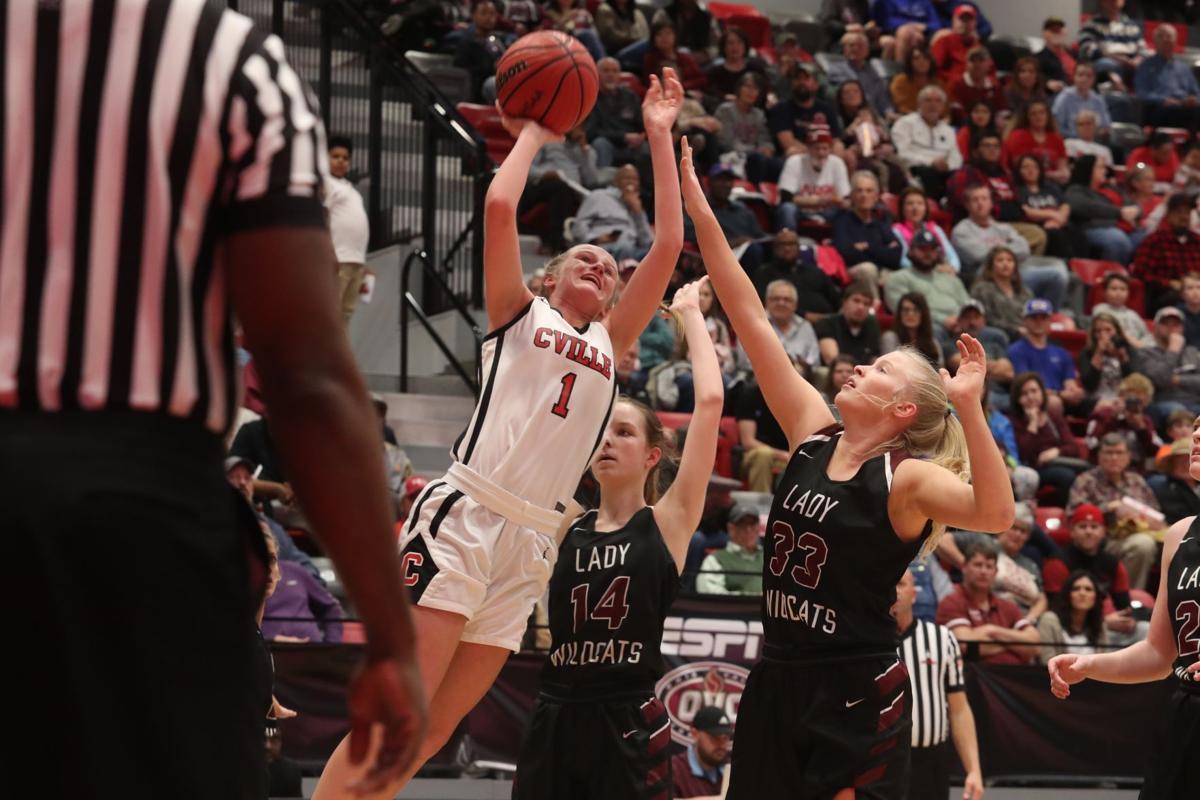 Collinsville’s Tyla Tatum (1) attempts a layup against against Sand Rock’s Haley Grace Lisenbee (14) and Maci Brown (33) during the AHSAA Class 2A Northeast Regional final at Pete Mathews Coliseum in Jacksonville on Tuesday. 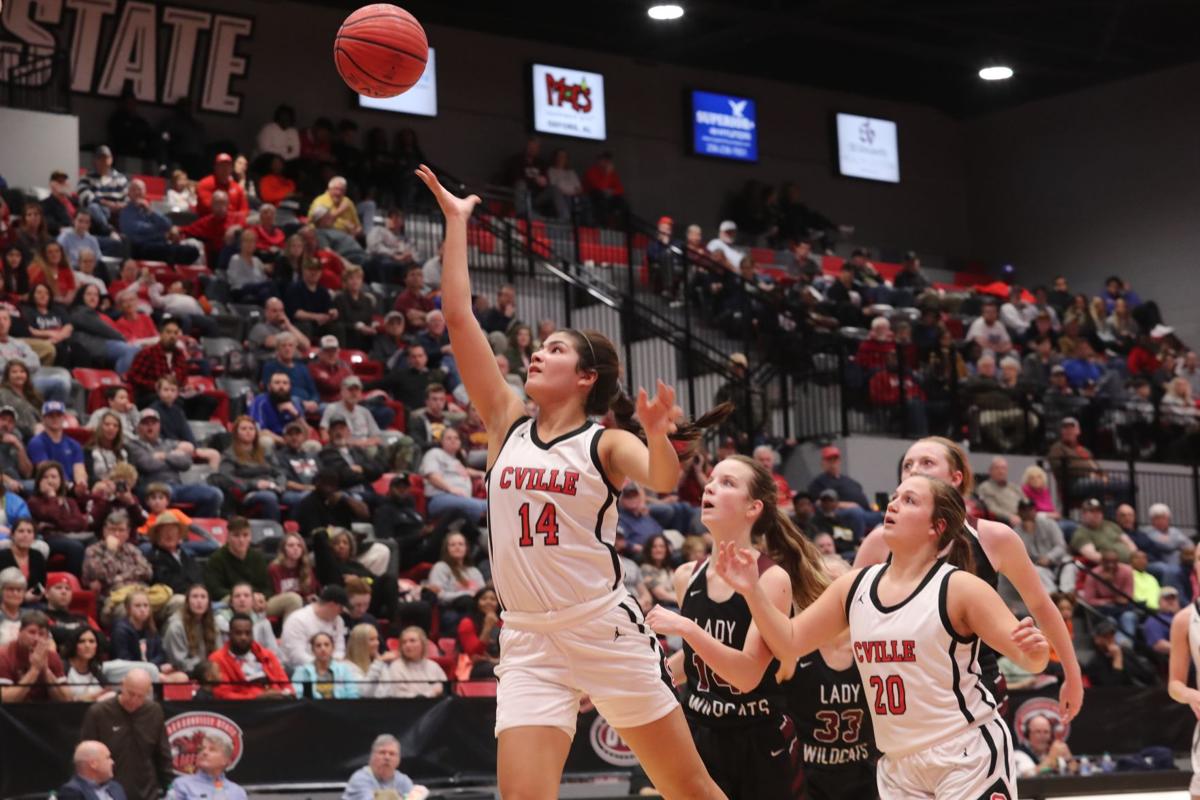 Collinsville’s Brittany Rivera (14) attempts a floating shot in the paint during the AHSAA Class 2A Northeast Regional final against Sand Rock at Pete Mathews Coliseum in Jacksonville on Tuesday. 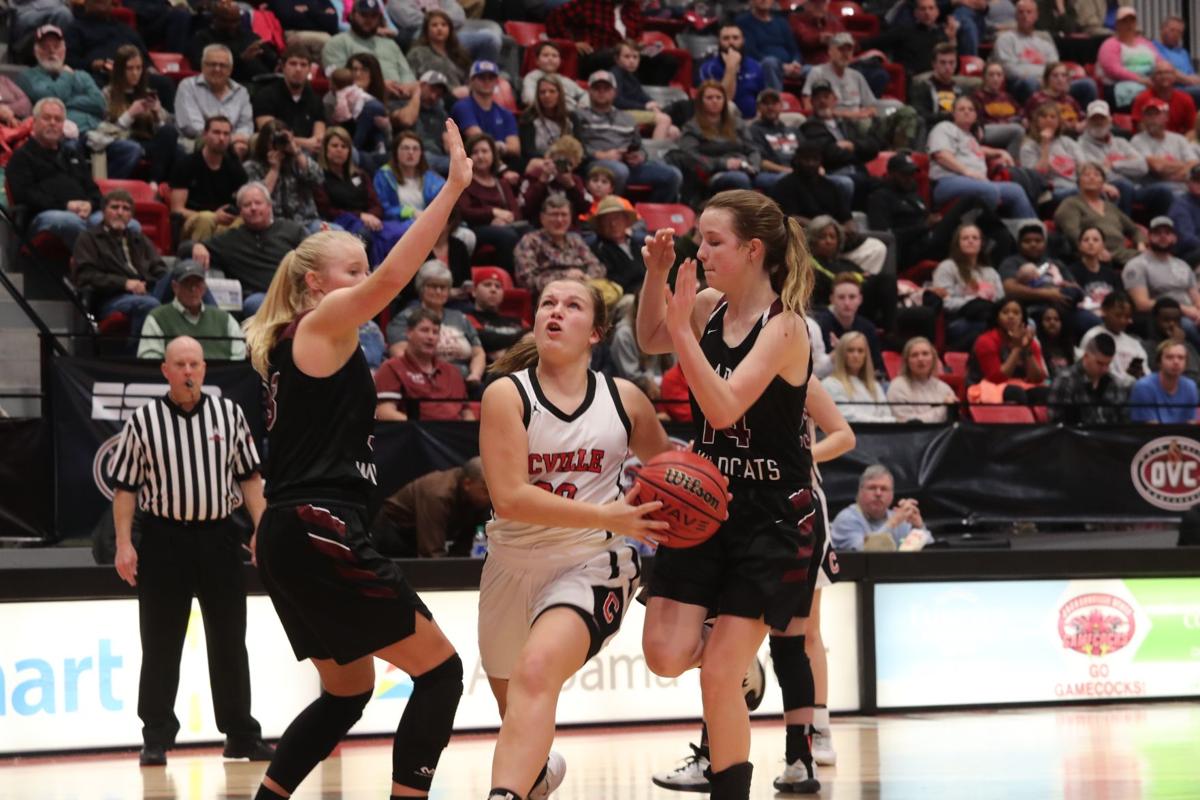 Collinsville’s Tyla Tatum (1) attempts a layup against against Sand Rock’s Haley Grace Lisenbee (14) and Maci Brown (33) during the AHSAA Class 2A Northeast Regional final at Pete Mathews Coliseum in Jacksonville on Tuesday.

Collinsville’s Brittany Rivera (14) attempts a floating shot in the paint during the AHSAA Class 2A Northeast Regional final against Sand Rock at Pete Mathews Coliseum in Jacksonville on Tuesday.

FORT PAYNE — The Collinsville girls basketball team is two wins away from bringing the program its first state championship.

Before the top-ranked Panthers earn the right to play for the AHSAA Class 2A state championship, they must first get past the rising No. 3-ranked G.W. Long Rebels.

Collinsville (27-3) takes on the Rebels (26-5) in the state semifinal round at 3 p.m. Monday at Legacy Arena in Birmingham.

Panthers forward Brittany Rivera, a Gadsden State signee who earned 2A Northeast Regional MVP honors, hopes to end her senior year with a successful trip to the AHSAA Final Four.

“I’ve never been and it feels good,” she said after Collinsville defeated Sand Rock 54-40 in Tuesday’s 2A Northeast Regional final in Jacksonville.

The Panthers’ last state semifinal appearance was 1997. They also competed in the semifinal round in 1996.

Caroline Brannon came off the bench and scored 12 of her 15 points in the second half, and Rivera had a double-double with 13 points and 17 rebounds to help lift Collinsville past area rival Sand Rock.

“That rivalry can get to you,” Panthers coach Jon Tidmore said. “It’s so important. The fans are so engaged in it. So, we tried to play outside of the rivalry and play our game.”

Brannon shot 6 of 9 from the floor and played a pivotal role in Collinsville’s offense in the second half. She made a layup with 2:40 remaining in the third to give the Panthers a 33-23 advantage.

As the Panthers fought through Sand Rock’s full-court defensive pressure in the fourth, Brannon made two free throws, a jump shot in the paint and a 3-pointer off an inbounds pass to help push her team into the AHSAA Final Four.

“I feel like (opponents) might lay off of me because they don’t think I can do as much on offense as the other players, so tonight I thought I had more confidence and it went our way,” Brannon said.

The win against Sand Rock evened the season series at 2-2, and was more than just a big win over an area rival. It was a measure of redemption for finishing runner-up to the Wildcats in the area tournament and a ticket to the state semifinals all rolled into one.

“Sometimes you play the rivalry game and you want it too badly,” Tidmore said. “Two years ago, both teams played really tight and it was so low-scoring. So we tried to make a focus this week that we were playing ourselves. It had nothing to do with the rivalry, it had nothing to do with any of that. We just had to be the best version of ourselves that we could be, and I think (our players) really bought into that.”

While it’s a first trip to the state semifinals for this Collinsville bunch, it’s the second straight visit to Birmingham in February for G.W. Long.

Rebels guard Hayden Hughes hit a buzzer-beating 3-pointer to lift her team to a 44-43 win against Geneva County in the 2A Southeast Regional in Montgomery on Tuesday.

“I knew my teammates had worked the whole game and they needed me to step up at that point of the game,” Hughes told The Dothan Eagle after the game. “I just didn’t think about it. I was just feeling it and shot it.”

G.W. Long shot 28 percent for the game, including 23 percent from 3-point range, while Geneva County also struggled shooting at 34 percent (20 percent from 3).

It was the Rebels’ 15th straight win. They knocked off Samson 47-32 in the regional semifinals and rolled past Thorsby 73-29 in the sub-regional round.

The Collinsville/G.W. Long winner will play the Cold Springs/Central-Hayneville winner for the 2A state title at 9 a.m. Friday, Feb. 28 at Legacy Arena in Birmingham.

Partly cloudy this morning, then becoming cloudy during the afternoon. High 71F. Winds NNW at 5 to 10 mph.