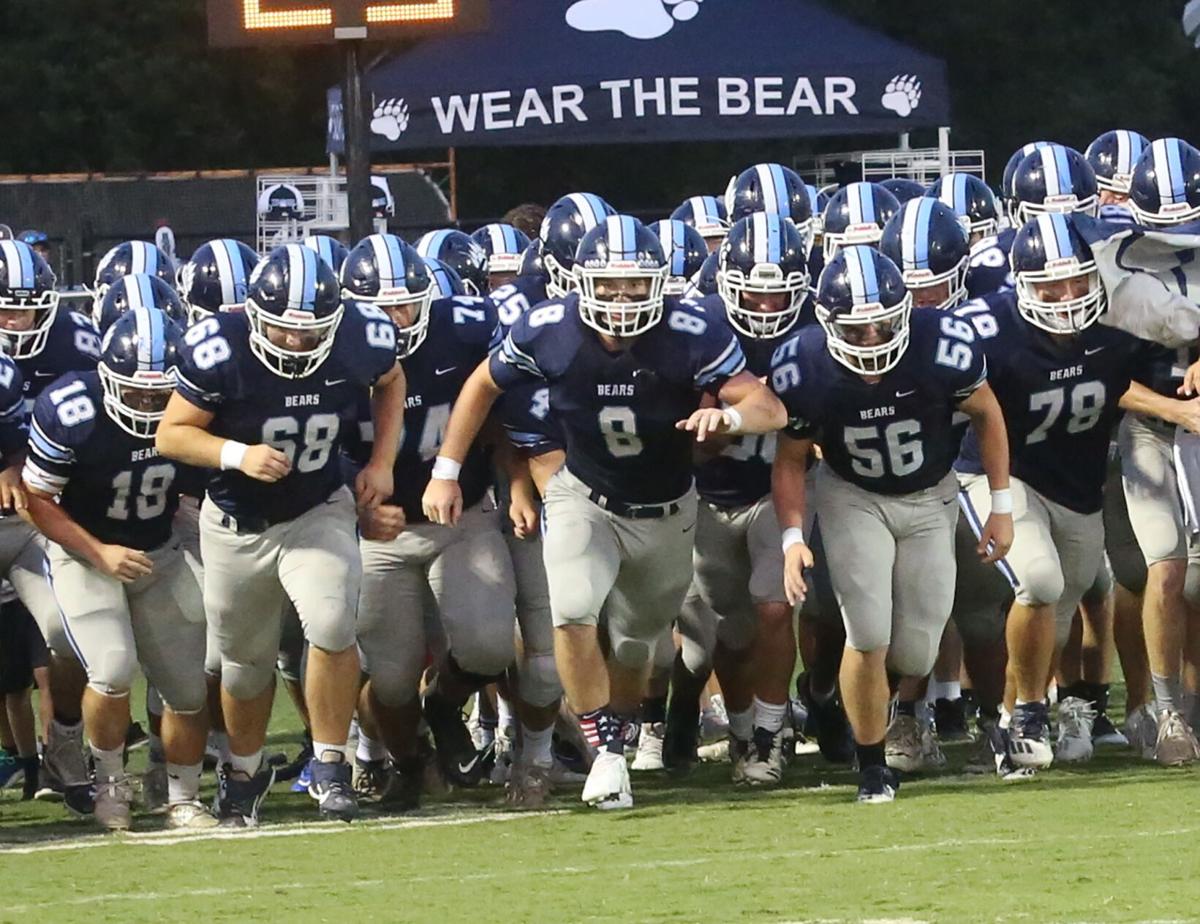 Plainview's football team makes its entrance to the field prior to a game against Ider on Aug. 28. 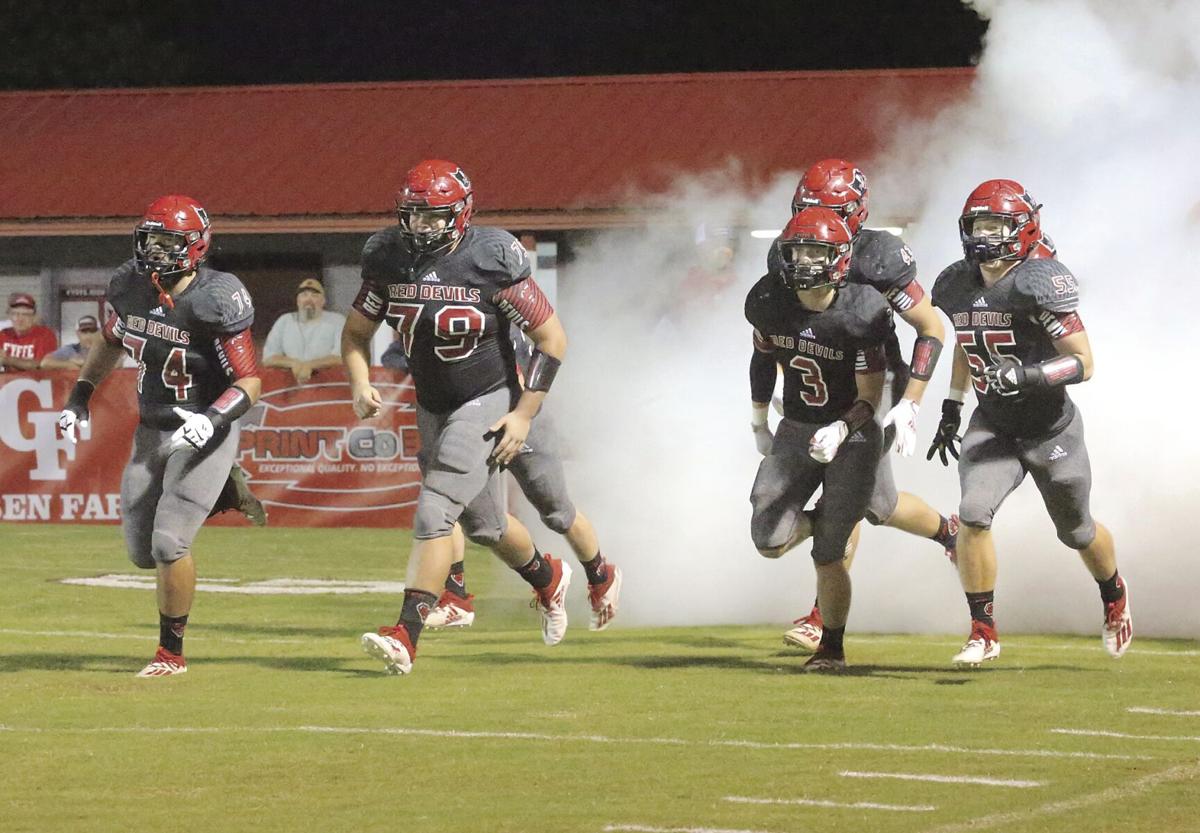 Plainview's football team makes its entrance to the field prior to a game against Ider on Aug. 28.

The Fyffe Red Devils and the Plainview Bears have sprinted through the first half of the regular season with unblemished records.

The Class 3A Region 7 rivals and last two remaining undefeated teams in DeKalb County meet for sole possession of the region’s top spot at 7 p.m. Friday in Rainsville.

Ike Rowell rushed for 161 yards on 29 carries with two rushing scores and a 32-yard touchdown pass to Brody Dalton.

Rowell scored on runs of 6 and 9 yards in the second quarter to put the Red Devils in command at 14-0 and added a scoring pass to Dalton early in the fourth.

The Red Devils finished the night with 247 yards of total offense to Clarke County’s 77.

The Bears took a 14-0 lead after scoring runs by Underwood and McCurdy and a Marcos Vega 2-point conversion run. They led 20-6 at halftime after a Noah White 53-yard scoring pass to Levi Brown.

According to the Alabama High school Football Historical Society’s website, Fyffe owns a 36-23-1 series lead against Plainview. The Red Devils have won the last 11 meetings, including a 35-0 win last season. The Bears’ last victory in the series was a 35-12 win in October 2008.

Here's a look at more of this week's games featuring DeKalb County teams:

Valley Head returns to region play this week, hosting the Appalachian Eagles in a Class 1A Region 7 matchup at 7 p.m. Friday.

The Tigers improved their overall record to 5-1 (3-0 in region) after outlasting Ider in a 34-32 win last week.

Ider nearly erased a 20-9 first-half deficit, but the Tigers managed to hold on for their fourth consecutive win of the season.

Appalachian (1-3, 1-1) joined Region 7 from Region 5 during the AHSAA’s offseason realignment. The Eagles are coached by Joe Cooper in his second year leading the program and are coming off a 41-16 loss at West End-Walnut Grove last week.

The Eagles are averaging 30 points per game while surrendering 37 per game this season. Their lone victory (56-15) came against region rival Coosa Christian on Sept. 18.

Valley Head is 5-2 all-time against Appalachian and has won the previous four. The last meeting was Oct. 2005, all according to the Alabama High School Football Historical Society’s website.

The Bulldogs (3-2, 1-1 Class 3A Region 7) took a second straight loss after falling to region rival Plainview the week prior.

Drew Fowler finished with 26 yards rushing on five carries for Geraldine. Bo Harper was 5 of 10 passing for 27 yards, Hall had three catches for 21 yards, Jaxon Colvin added one reception for six yards and Fowler had one catch for two yards.

The Lions surrender 25 points per game, while scoring just four per contest.

They have three losses by forfeit on their 2020 record and their latest defeat was 46-12 vs. Sumiton Christian last week.

Sylvania and Asbury will play for the first time in the history of the two programs when Sylvania visits for a 7 p.m. kickoff Friday.

The Rams of Asbury (0-5, 0-2) have struggled to find offense throughout the 2020 campaign. They average only 10 points per game and allow 39. They took a 28-19 loss at home against Coosa Christian last week.

Meanwhile, the Rams of Sylvania (4-2, 2-1) are winners of their last two contests. In their latest win, the Rams scored five first-half touchdowns, including a 67-yard fumble recovery and score by Blake Phillips to give them a 21-0 lead in a 42-12 victory at Holly Pond last week.

Brody Smith completed all three passing attempts for 138 yards and two touchdowns for Sylvania. Keenan Wilbanks caught a 47-yard scoring pass and added 93 yards rushing, Braiden Thomas ran for 64 yards and Sawyer Hughes had an 83-yard touchdown catch with an interception on defense.

The Ider Hornets aim to end a five-game slide at home against the Victory Christian Lions at 7 p.m. Friday.

The Hornets (1-5, 0-3) returned to action last week after having to forfeit their two previous region games due to COVID-19 concerns. They nearly erased a 20-9 first-half deficit at Valley Head last week, but came up short in a 34-32 loss.

Ider tallied 328 yards of offense and 426 yards in total, including four kickoff returns.

Ider’s Hunter Robinson led the rushing attack with 172 yards on 22 carries, adding four kick returns for 98 yards to finish with 270 yards in total.

Matthew Norman carried the ball 18 times for 87 yards and three rushing scores for the Hornets. He also completed 7 of 11 passes for 69 yards and one passing score.

Dallen Hartline had three catches for 43 yards and a touchdown reception.

Ider is 2-0 against Victory Christian (3-3, 1-2), having last played September 2011. The Hornets won the meeting 47-12, all according to the Alabama High School Football Historical Society’s website.

The Lions have lost their previous three games, including a 20-6 defeat at Fayetteville last week.

Coach Bruce Breland is in his second season leading Victory Christian, a team from Pell City.

The Warriors are also looking for their first win after taking a 43-35 loss against Hayden last week and falling to 0-5 overall (0-2 in region).

West Point averages 24 points per game, while allowing 32 per game.

Friday’s contest will also serve as the first meeting between Crossville (0-5, 0-2) and West Point, which became Class 5A Region 7 rivals after the AHSAA’s offseason reclassification.

Kolby Lesley ran for 92 yards on 24 carries to propel the Lions’ run game in last week’s 34-20 loss at undefeated Class 3A Plainview.

The Lions amassed 282 yards of offense, all from run plays.

New Life has scored 96 points through five contests but has surrendered more than double that point total to opponents (226).

After falling behind 33-0 in the third quarter, CCA’s Israel Phillips found Matt Johnson for a 43-yard touchdown with 5:47 remaining in the quarter. Phillip Grizzard added a 35-yard field goal with 2:15 left in regulation to sum up the scoring.