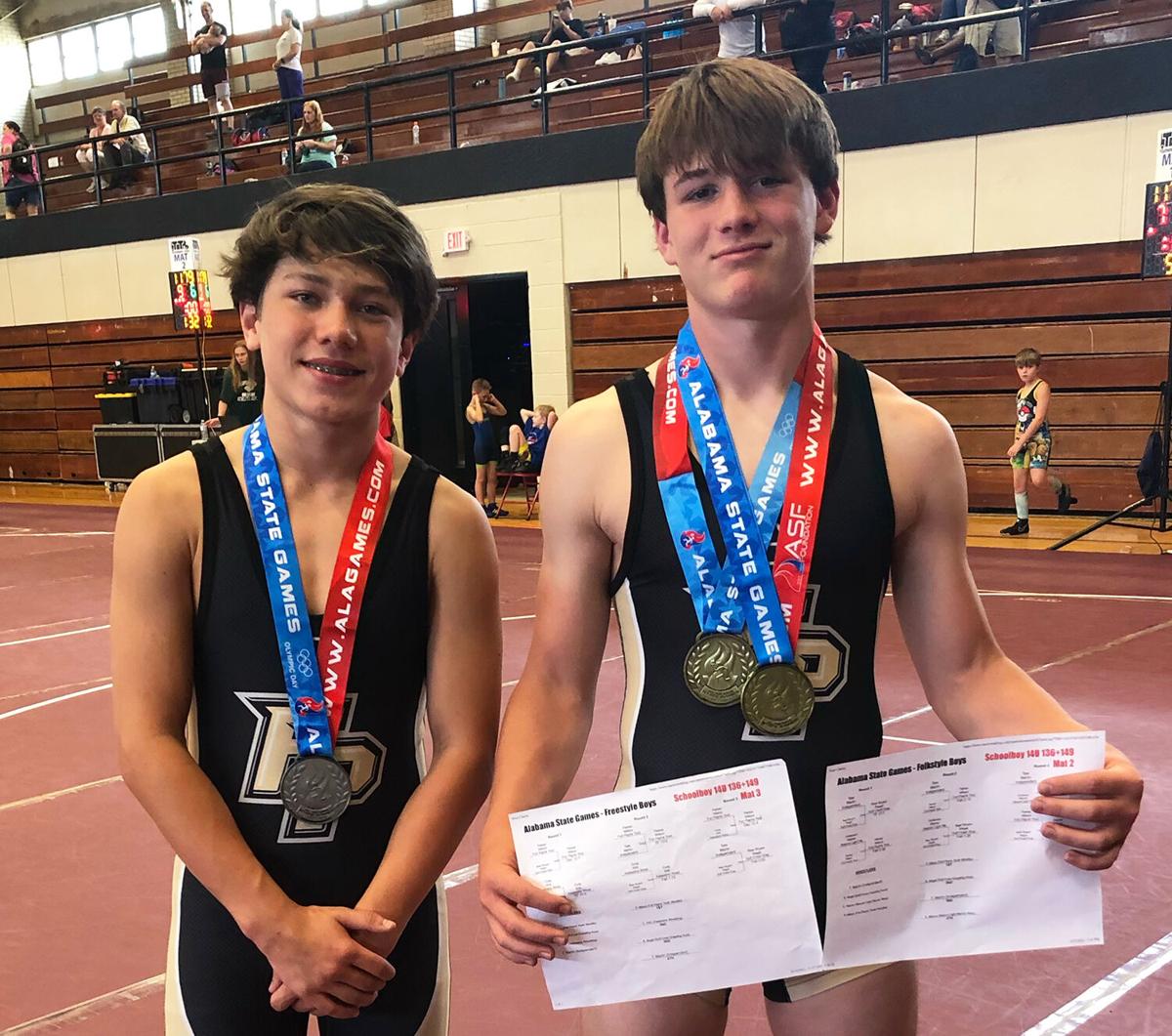 Fort Payne’s Tucker Burkhead, left, and Parker Wilson are pictured following their matches at the 2021 Alabama State Games in Dothan on Saturday. 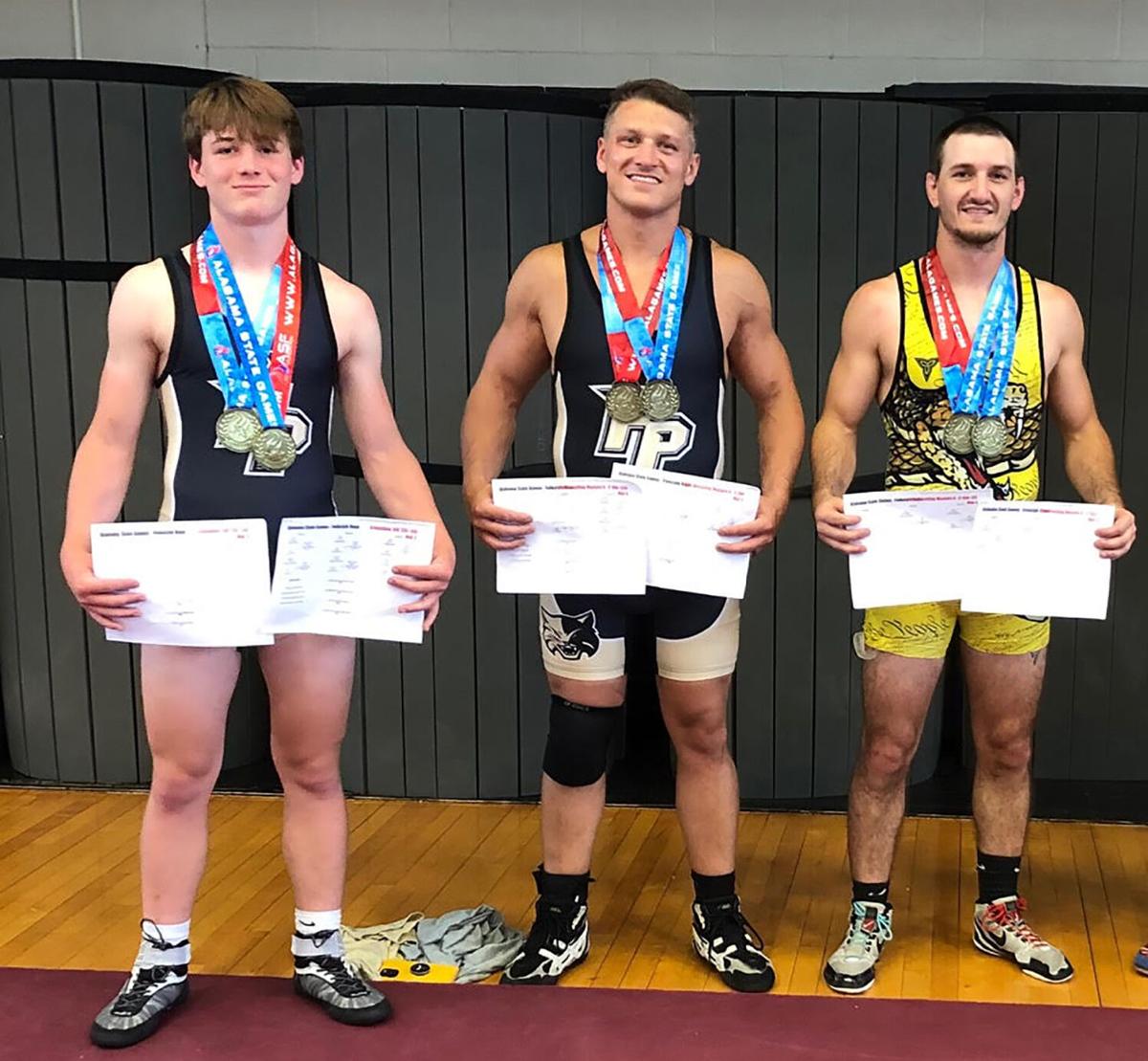 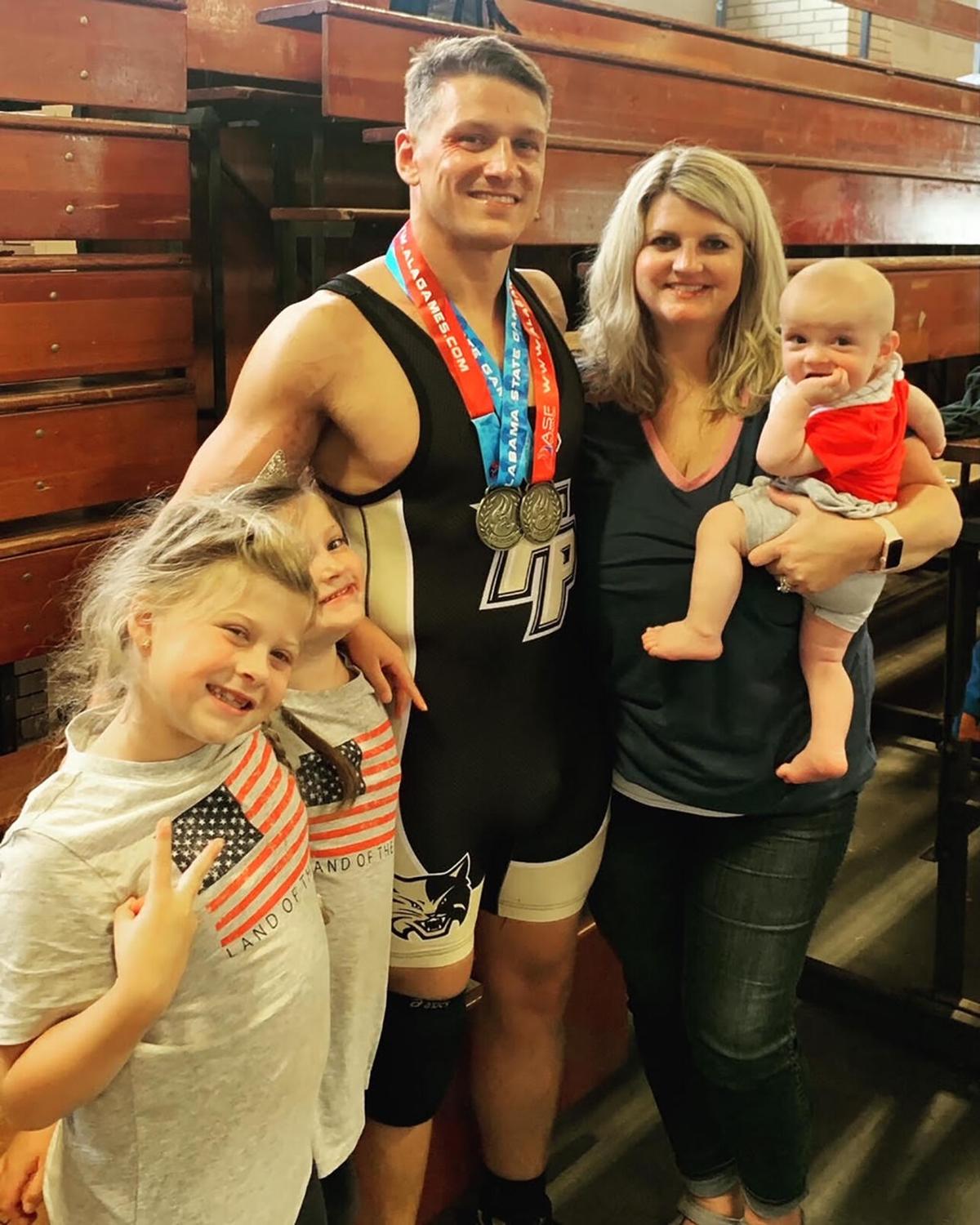 Fort Payne’s Tucker Burkhead, left, and Parker Wilson are pictured following their matches at the 2021 Alabama State Games in Dothan on Saturday.

Parker Wilson, Tucker Burkhead, Dustin Holcomb and Ethyn Holbrook all brought gold medals back home with them, while John Price finished as a silver medalist. Beau Wilson and Holbrook both served as coaches for the group.

All placers at the event qualified for the State Games of America wrestling tournament, held July 27-31 in Ames and Des Moines, Iowa.

“I was really excited,” Parker Wilson said. “I’d been looking forward to going to the state games. It’s a good opportunity and I took it.”

In the schoolboy 14U division, Wilson swept all of his matches, winning in all three wrestling categories: folkstyle, freestyle and Greco-Roman. In his Greco competition, Wilson had two wins by forfeit and another by a 16-6 tech fall. Wilson won by fall in all three of his folkstyle matches. In folkstyle, Wilson won by a 10-7 decision in Round 1, won by a 10-0 tech fall in Round 2 and was victorious by a 12-4 decision in Round 3.

In the USA Wrestling Masters A-C division, Holcomb won in freestyle and folkstyle after having not wrestled competitively in 18 years.

Four months ago, Holcomb was told about the tournament and the local group being organized to wrestle at the Alabama State Games. He was immediately interested and began weight training, cardio training and sharpening his technical aspects of the sport.

Holcomb credited Beau Wilson, Holbrook and Price for helping prepare him for the tournament.

“We all have kids and careers, so we’d meet at times that wouldn’t take away from our normal jobs and our families,” Holcomb said. “It’s cool to get a group of guys together like that who are all interested in the same thing.”

“I signed up for it just thinking I would be competitive, not really knowing if I could win or not,” Holcomb said.

Holbrook, an assistant wrestling coach at Fort Payne High School, won gold in folkstyle and freestyle in his respective weight class in the USA Wrestling Masters A-C division. He defeated Price by a 7-2 decision in Round 1 of his folkstyle match and received a win by forfeit in his next bout. In Holbrook’s freestyle matches, he won by a 10-0 tech fall in the first round and won by the same method in Round 2.

“Overall, I think we competed well,” Holbrook said of his Fort Payne group. “We’ve been training for this tournament for quite some time. It was fun to find a tournament that older men can compete in. Our goal was to have fun and I think we did that.”

Also competing in the USA Wrestling Masters A-C division of folkstyle, Price followed his Round 1 loss to Holbrook with a win by forfeit in Round 2.

Partial cloudiness early, with scattered showers and thunderstorms during the afternoon. High 92F. Winds WNW at 5 to 10 mph. Chance of rain 40%.