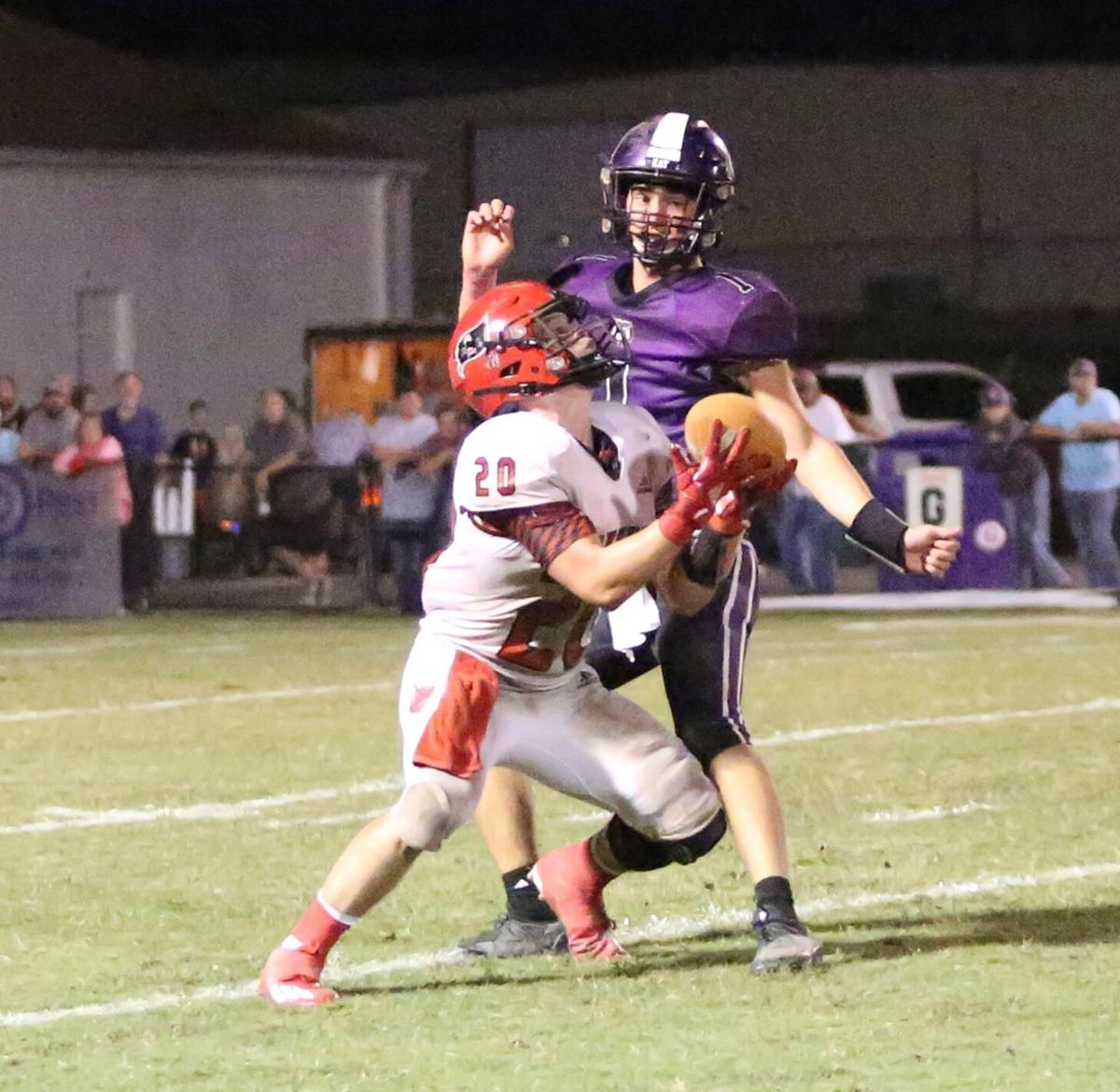 Fyffe’s Will Stephens (20) fields a punt as Geraldine’s Austyn Banks defends the play. 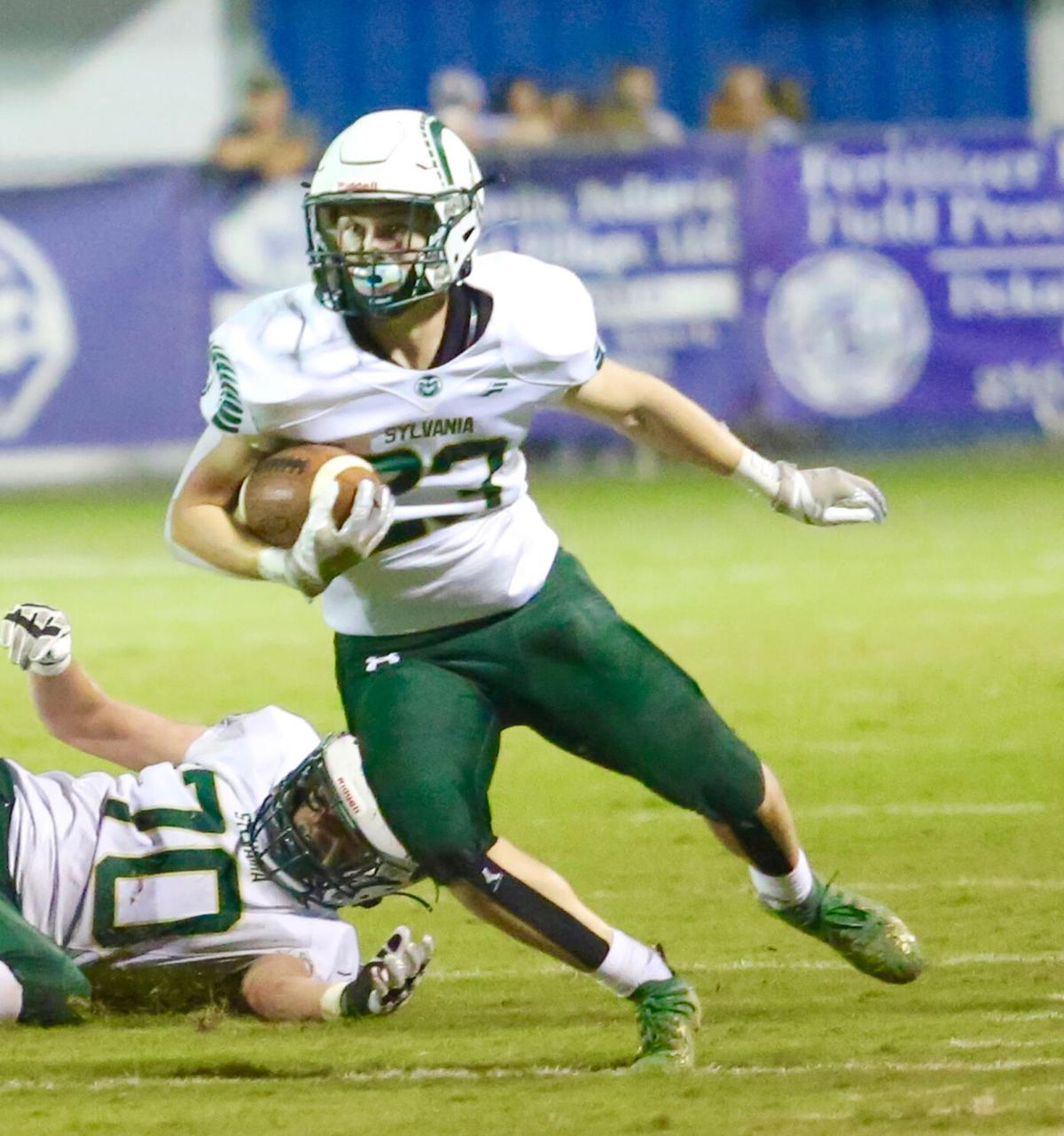 Sylvania’s Preston Bates (23) carries the ball around an edge in a game against Plainview. 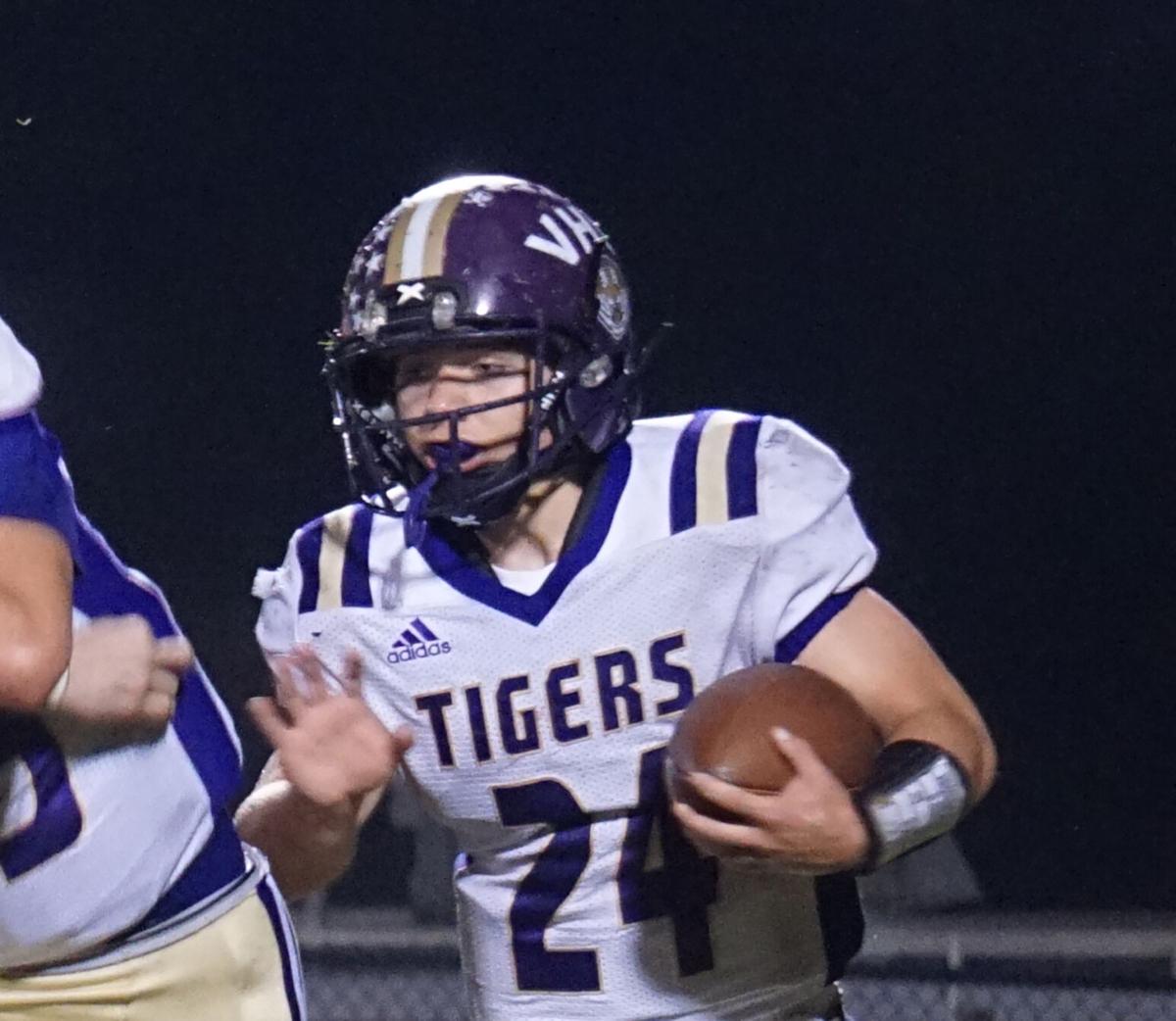 Valley Head’s Eian Bain runs the ball around the offensive line during a game against Sumiton Christian. 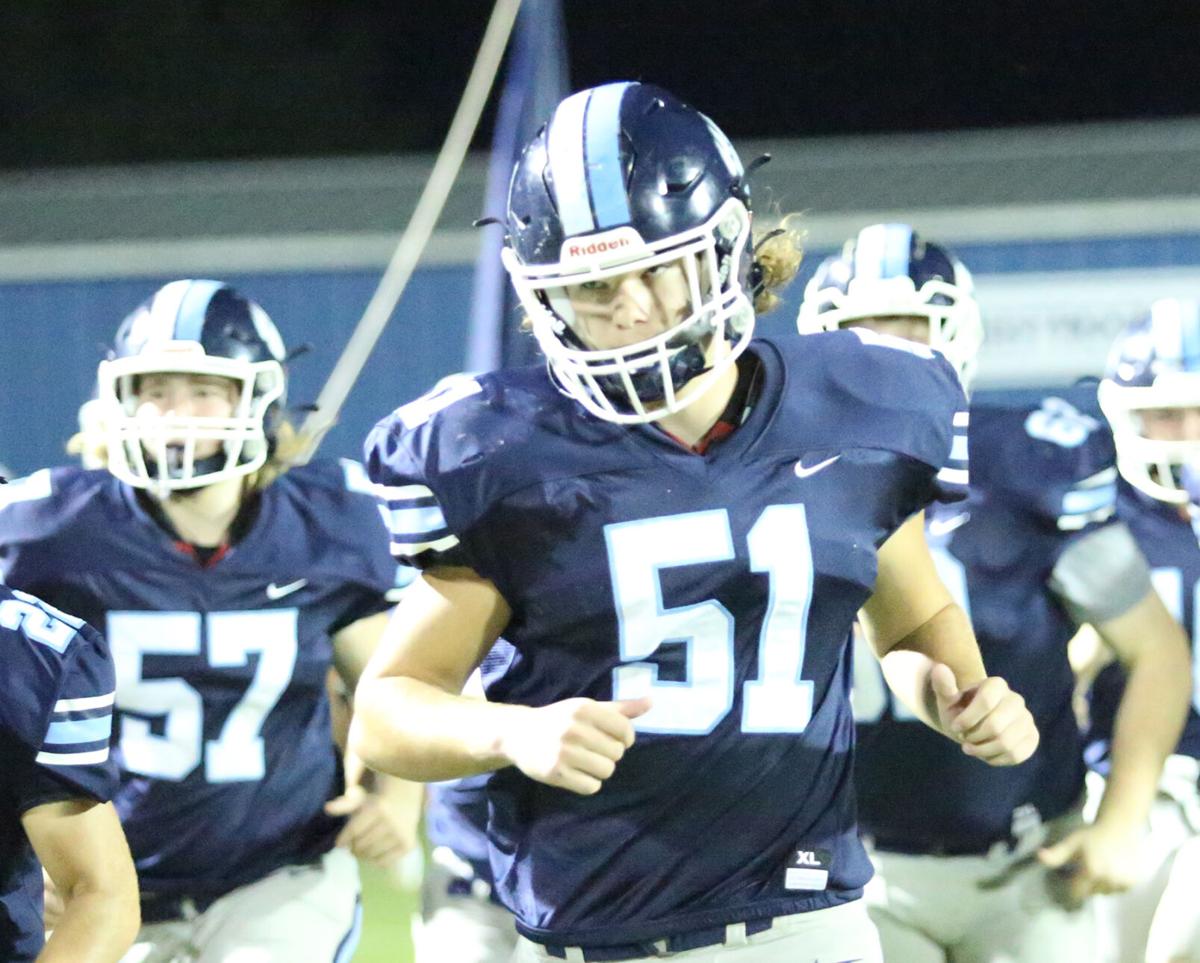 Plainview’s Austin Strickland (51) runs onto the field with teammates ahead of a regular-season game this season in Rainsville. 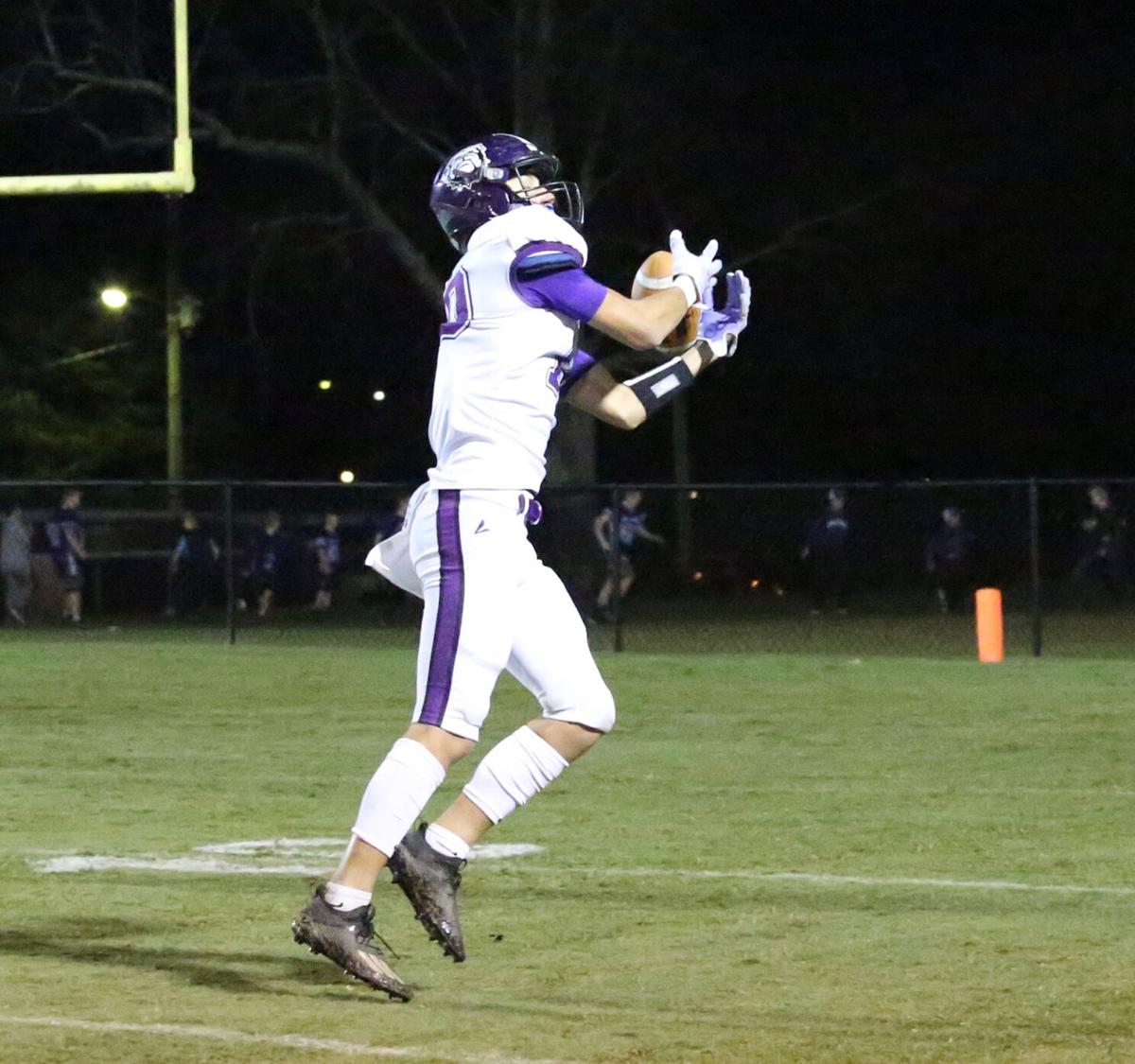 Geraldine’s Colton Lusher hauls in a touchdown pass against Fyffe earlier this season. 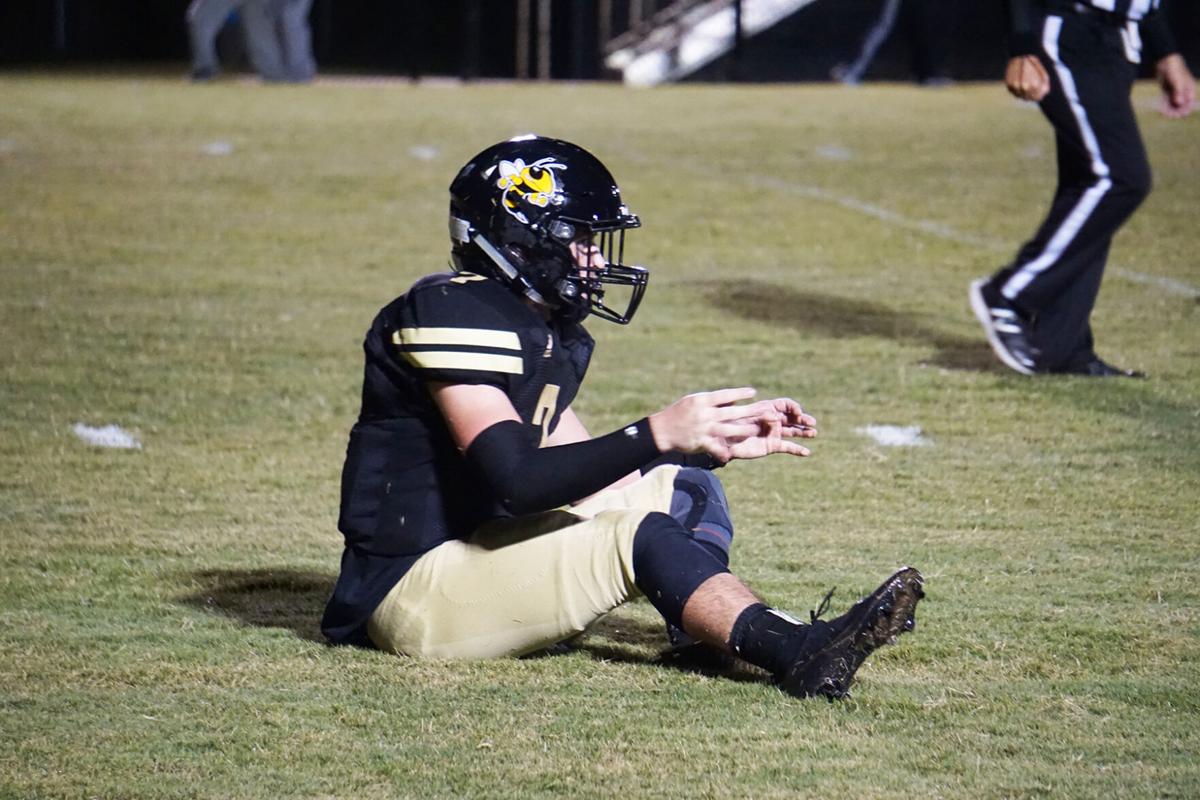 Ider’s Hunter Robinson gets up after rushing the ball earlier this season.

Fyffe’s Will Stephens (20) fields a punt as Geraldine’s Austyn Banks defends the play.

Sylvania’s Preston Bates (23) carries the ball around an edge in a game against Plainview.

Valley Head’s Eian Bain runs the ball around the offensive line during a game against Sumiton Christian.

Plainview’s Austin Strickland (51) runs onto the field with teammates ahead of a regular-season game this season in Rainsville.

Geraldine’s Colton Lusher hauls in a touchdown pass against Fyffe earlier this season.

Ider’s Hunter Robinson gets up after rushing the ball earlier this season.

Logan Anderson led the rushing attack with 139 yards and five total touchdowns. He ran for four scores and added an 89-yard kickoff return for a score.

All of Fyffe’s 286 yards of offense came from its run game. Kyle Dukes ran for 113 yards on 17 attempts, and Brodie Hicks had nine carries for 31 yards and two touchdowns.

Meanwhile, the Panthers (5-4) earned the fourth seed from Region 5 and closed the regular season with a 47-16 loss at Piedmont on Oct. 22. They enter the postseason after a bye week.

Head coach Jeff Smith leads Wellborn in his 13th season at the helm.

Fyffe is 4-0 all-time against the Panthers, according to the Alabama High School Football Historical Society's website. Fyffe ousted Wellborn from the second round of the playoffs last season with a 42-13 victory.

Riding a six-game winning streak coming into their first-round 3A state playoff game, the Sylvania Rams host the Piedmont Bulldogs at 7 p.m. Friday.

Piedmont, a No. 3 seed from Region 5, appeared in the state semifinal round last season. The Bulldogs, coached by Steve Smith in his 16th season, enter this week’s postseason opener with an 8-2 record.

The Bulldogs finished the regular season with a 25-20 loss against Alexandria, which stopped a three-game win streak. Their other loss was a 28-24 defeat against Ohatchee.

Piedmont holds a 5-2 lead against the Rams, although the two programs haven’t played since 2001. Sylvania won the previous two series meetings, all according to the Alabama High School Football Historical Society's website.

Valley Head and Ragland will play each other for a second time this season.

Valley Head (5-5) is Region 7’s No. 2 seed, having closed the regular season last week with a 27-14 win at 3A Collinsville’s Chad Hawkins Stadium.

Eian Bain ran for 233 yards and three touchdowns, Ashton Brown added 81 yards rushing and one score and the Tigers used a second-half scoring effort to down Collinsville last Thursday night.

With the game tied at 14 at the start of the third quarter, Bain scored on a 13-yard run and Hernan Moreno kicked an extra point for the go-ahead 21-14 score.

Bain added a 4-yard scoring run early in the fourth with a Moreno kick.

Pacey Cooper carried the ball seven times for 51 yards for the Tigers.

Ragland, a No. 3 seed from Region 5 with an 8-2 record, enters Friday;s contest with a 5-2 series lead vs. Valley Head, according to the Alabama High School Football Historical Society's website.

The Purple Devils romped past Asbury 38-6 last week to close the regular season with a three-game win streak.

As the No. 4 seed in 3A’s Region 7, Plainview travels to Saks for a first-round state playoff game at 7 p.m. Friday.

The Bears (7-3) begin postseason play after closing the regular season with a 49-13 victory against Glencoe last Friday night.

Levi Brown ran for a 43-yard touchdown with 4:41 left in the second quarter to give the Bears a 28-6 halftime lead, White connected with Joseph Buchanan for a 51-yard score in the third and Chase Alexander scored on a 49-yard run late in the fourth.

According to the Alabama High School Football Historical Society's website, this week’s playoff game will be the first meeting between Plainview and Saks.

Plainview and Saks have three common opponents from this regular season in Sylvania, Geraldine and Glencoe — Saks defeated all three teams, while Plainview had losses to Sylvania and Geraldine.

Saks (9-1) is the top seed from Region 5, having won the region championship and rattled off seven straight wins to close the regular season, defeating Hokes Bluff 21-7 last week. The lone loss on Saks’ schedule was a 28-12 defeat against Piedmont.

Behind a three-game winning streak, the Geraldine Bulldogs visit the Ohatchee Indians for a first-round meeting in the 3A state playoffs at 7 p.m. Friday.

A No. 3 seed from Region 7, the Bulldogs (7-3) shut out DeKalb County rival Crossville 53-0 in the 100th renewal of the Battle of Skirum Creek last Friday night.

The Bulldogs, led by first-year head coach Michael Davis, amassed 419 yards of offense in the regular-season finale. Cody Satterfield led all Geraldine rushers with 96 yards on five attempts with a touchdown, Caleb Hall ran for 75 yards on 10 carries with a touchdown and Jaxon Colvin added two rushing scores behind five carries for 64 yards.

Carlos Mann caught the only two passes thrown, finishing with 41 yards receiving with a touchdown.

The Indians are the No. 2 seed from Region 5. They finished the regular season with a 47-20 win against Munford to complete a five-game win streak.

After a bye week to rest, recover and prepare for the first round of the 2A state playoffs, Ider travels to Aliceville at 7 p.m. Friday.

The Hornets will make their first state playoff appearance since the 2017 season this week, led by head coach Chad Grant in his first season with the program. In their previous playoff game, the Hornets were ousted in the opening round after a 35-7 loss at Lamar County.

According to the Alabama High School Football Historical Society's website, it will be the first matchup between Ider and Aliceville.

The Yellow Jackets, led by first-year head coach Grady Griffin, are coming off a 38-8 victory at Linden last week.