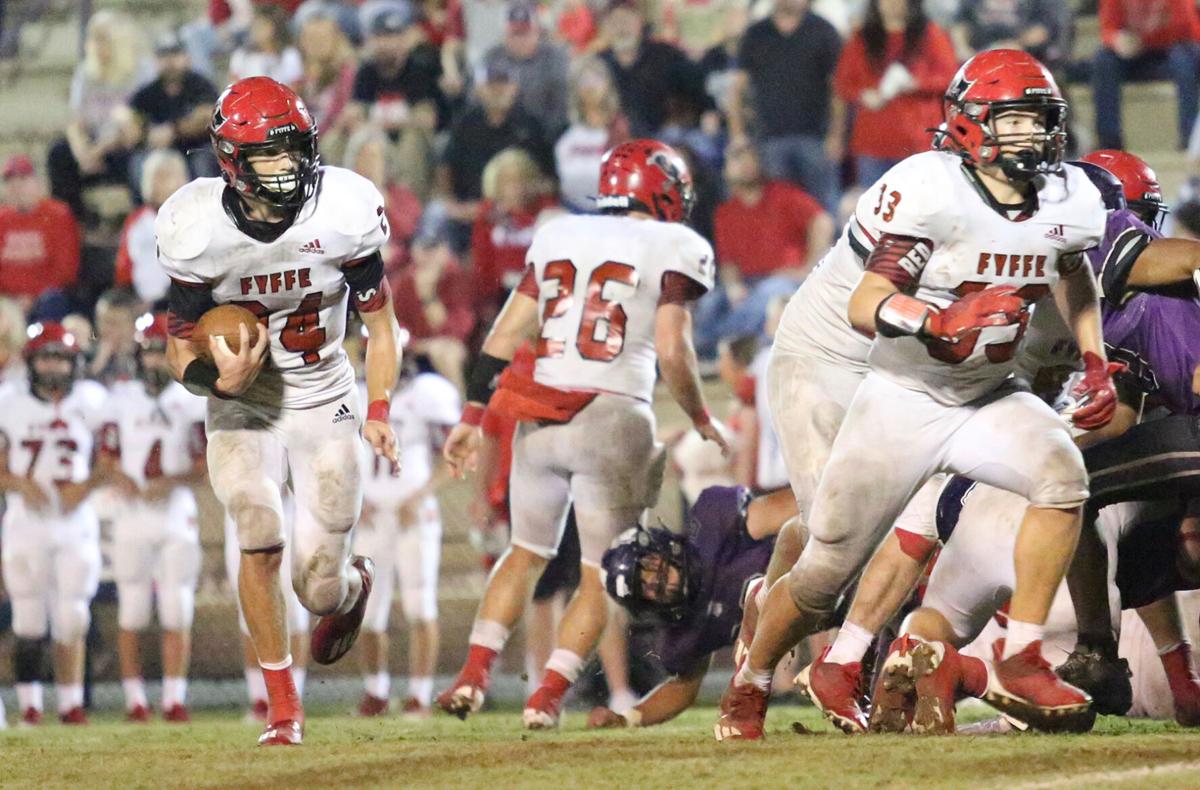 Fyffe's Logan Anderson, left, carries the ball behind a block from teammate Simon Hicks, right, during a game against Geraldine on Oct. 15. 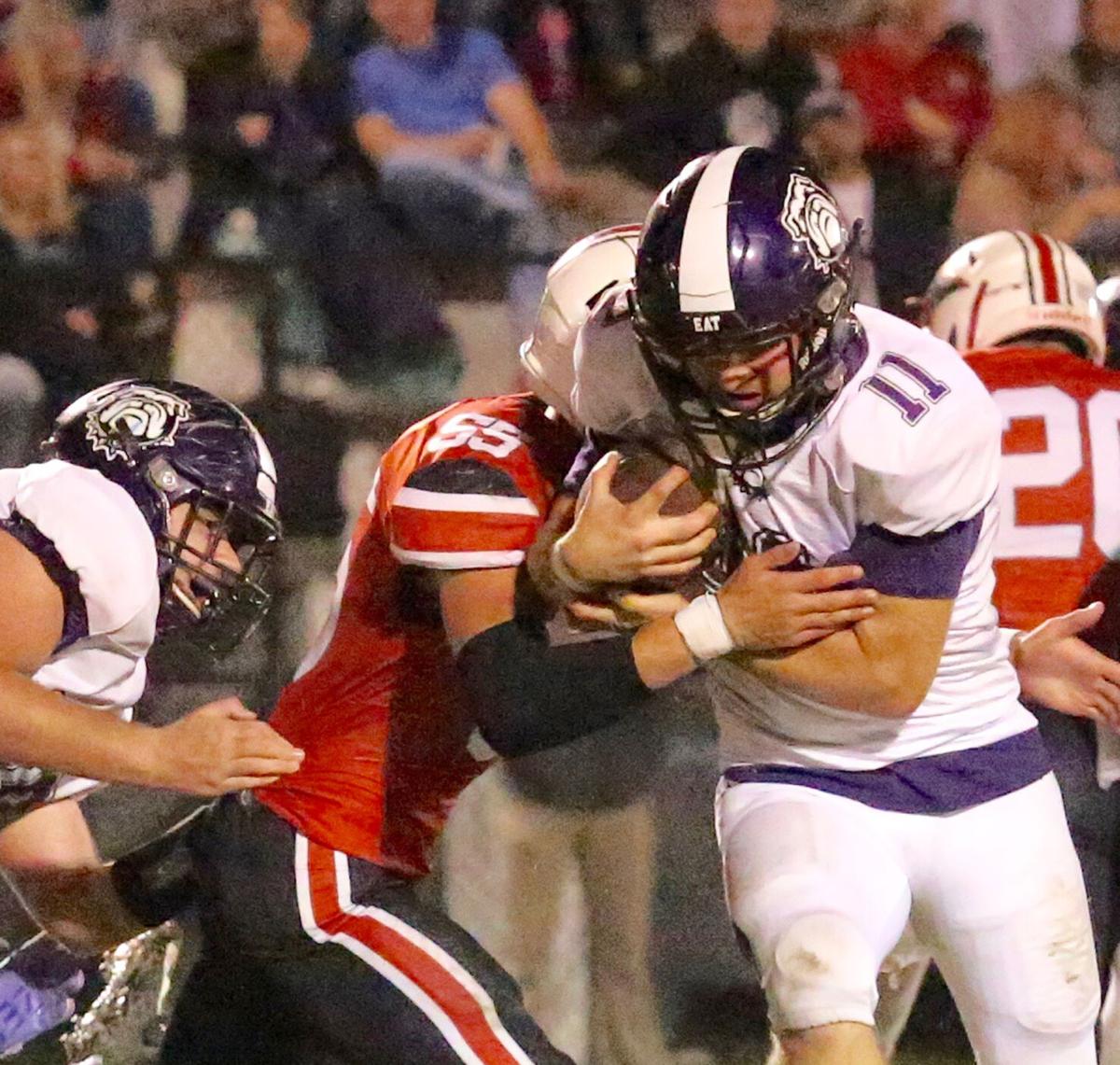 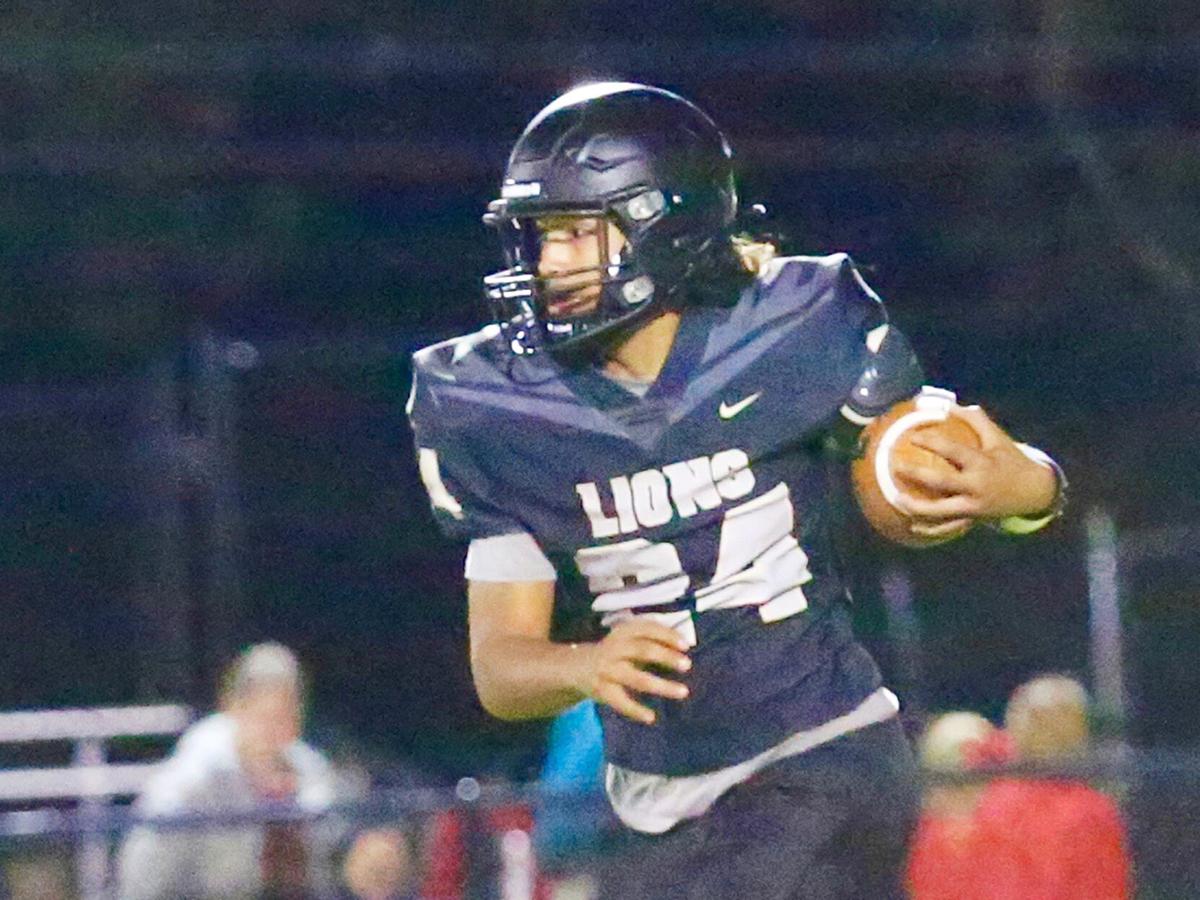 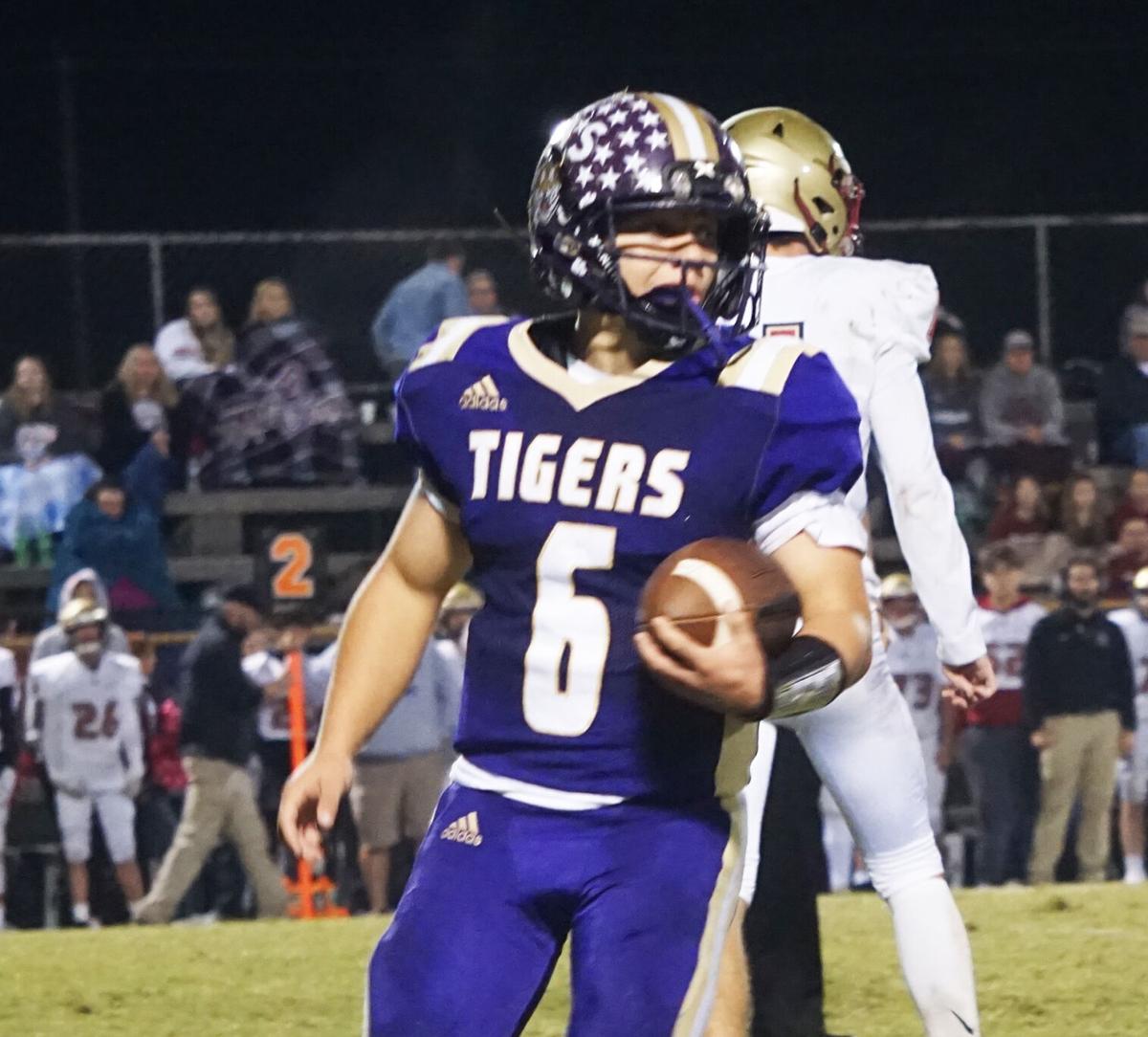 Valley Head’s Eian Bain looks toward the sideline during a stoppage in play against Sumiton Christian last Friday night. 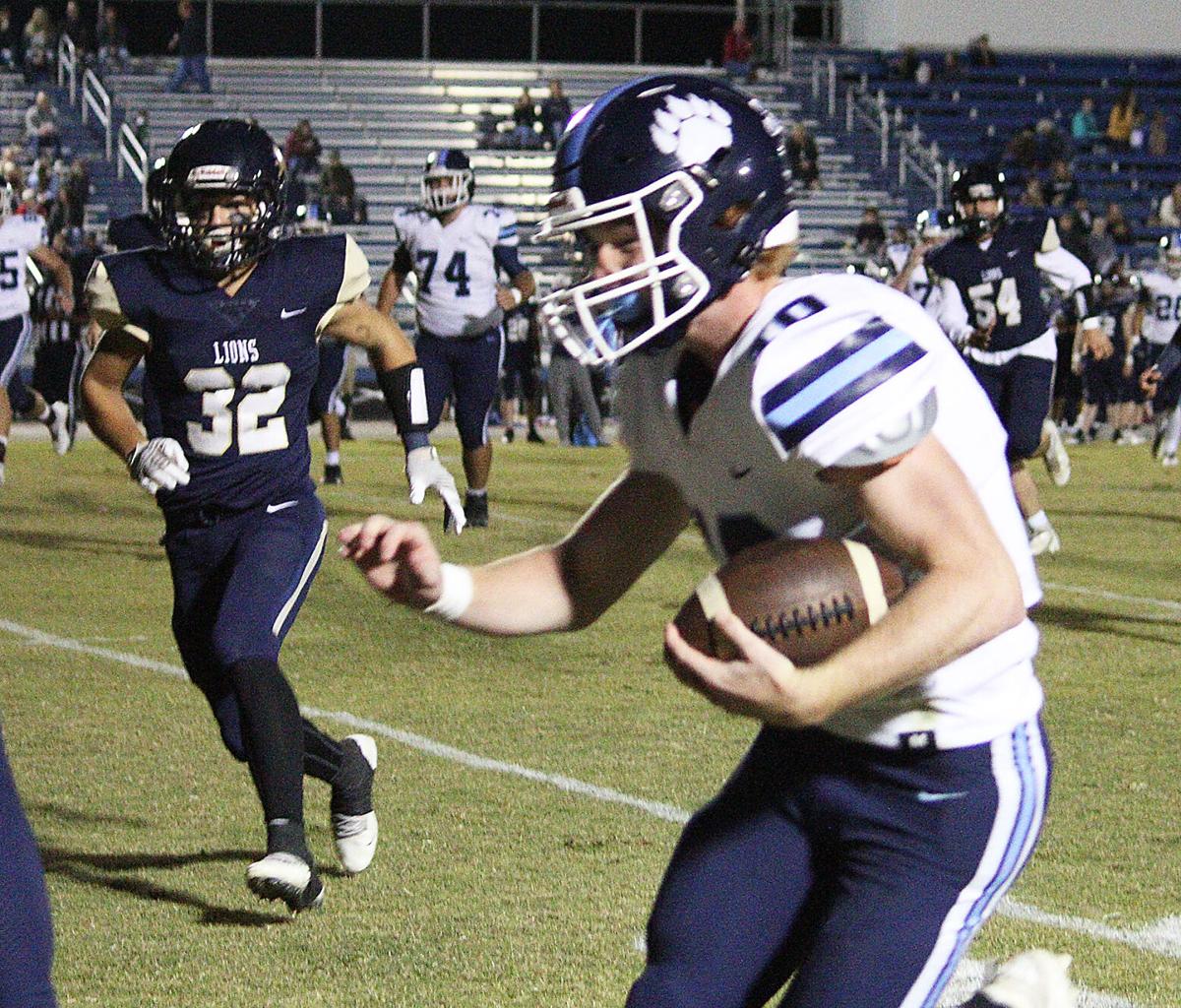 Fyffe's Logan Anderson, left, carries the ball behind a block from teammate Simon Hicks, right, during a game against Geraldine on Oct. 15.

Valley Head’s Eian Bain looks toward the sideline during a stoppage in play against Sumiton Christian last Friday night.

After Scottsboro was forced to cancel last year’s scheduled meeting with Fyffe due to COVID-19 concerns, the inaugural game between the two programs is set for 7 p.m. Thursday at Paul Benefield Stadium.

Last Friday night, the Red Devils closed out their 3A, Region 7 slate with a 54-0 drubbing of Asbury, improving to 7-1 overall and 5-1 in region play.

Ryder Gipson had nine carries for 141 yards and four touchdowns for Fyffe in the win. He scored touchdowns on runs of 30, 35, 20 and 44 yards.

Logan Anderson rushed once for a 61-yard score to put the Red Devils ahead 27-0 early in the second period, before Gipson produced two rushing touchdowns to push the lead to 40-0 at halftime.

Asbury was limited to 33 yards of offense, while the Red Devils amassed 396 yards.

Coming off a 24-19 victory against Pell City in their 6A, Region 7 finale, the Wildcats moved to 3-6 on the season.

Jake Jones ran for 105 yards on 28 carries for Scottsboro and also completed 5 of 7 passes for 62 yards, as the Wildcats rallied from a three-point deficit at halftime. Keelan Alvarez ran for 102 yards on 14 carries while Landon Grider picked up 41 yards on five carries. Trey Cooper caught three passes for 36 yards.

Geraldine hosts Crossville for the 100th renewal of the Battle of Skirum Creek at Coolidge-Isbell Field at 7 p.m. Friday.

While the Bulldogs (6-3) will advance to the AHSAA 3A state playoffs, the Lions (0-9) will look to best a longtime rival and finish their season with a win.

Jaxon Colvin completed 3 of 4 passes for 110 yards with three touchdowns and no interceptions in Geraldine’s 63-20 rout of Collinsville last Friday. Colvin contributed seven tackles, including two sacks for the defense, and blocked a punt and returned it for a 42-yard touchdown.

In a 48-0 loss to Douglas in its 5A, Region 7 finale last week, Crossville was held scoreless for the fifth time this season. Douglas scored six first-half touchdowns, five of them from beyond 40 yards.

The Lions surrendered three sacks and three turnovers, while collecting a total of 110 yards of offense.

Geraldine is hosting the Battle of Skirum Creek Tailgate on game day. The school is renting 12x12 spots for $25 each.

Items to bring include coolers, food, grills, chairs, tables, games, speakers (no explicit content) and decorations. Prohibited items include alcohol, tobacco and anything else against school policy.

Tailgating begins at 3:30 p.m. after school traffic clears. Renters can set up their tents at their assigned locations from noon-2 p.m. Friday. A trophy will be awarded to the most spirited tent.

Everything must be cleaned up after the football game that night.

In their season finale, the Collinsville Panthers will host DeKalb County’s 1A Valley Head Tigers at Chad Hawkins Stadium at 7 p.m. Thursday.

Keaton DeBoard rushed for 107 yards on 23 carries and a touchdown in the Panthers’ 63-20 loss to Geraldine in a 3A, Region 7 finale for both teams last Friday night.

Colton Wills ran for 40 yards with a touchdown, caught one pass and had 41 yards in kickoff returns. Fernando Padilla had 13 carries for 57 yards and a score.

The Panthers dropped to 3-6.

Meanwhile, Valley Head (4-5) closed out its 1A, Region 7 schedule with a 49-21 victory against Sumiton Christian last week.

Eian Bain rushed for a game-high 151 yards on 24 attempts with two touchdowns and Ashton Brown added 146 yards on 23 carries with four scores for the Tigers.

Defensively, Brown and teammate Roger McMahan each made an interception.

Brown scores on runs of 1 and 6 yards to give Valley Head a 14-0 advantage. He added a 4-yard scoring run in the third quarter to push the lead to 28-7. His final score was on a 4-yard run midway through the final period, accounting for the game’s last touchdown.

The all-time series between Collinsville and Valley Head stands with Collinsville leading 42-36-5, according to the Alabama High School Football Historical Society’s website. The Panthers have won the previous seven meetings.

Plainview hosts Glencoe for its regular-season finale in Rainsville at 7 p.m. Friday.

The Bears (6-3) enter the contest with a 6-4 series lead, according to the Alabama High School Football Historical Society’s website, having won last year’s game 43-6 at Glencoe.

Glencoe, a 3A, Region 5 team, is coming off its first win of the season last week, beating Pleasant Valley to improve to 1-8.

In each of their other seven contests, the Yellow Jackets have lost by two or more touchdowns.

According to the Alabama High School Football Historical Society’s website, the Rams (7-2) are 21-10 all-time against North Sand Mountain (4-5). The Bison won 25-19 in double-overtime last season.

For the hosting Rams, they return home after a 35-21 win at East Limestone last Friday night, extending their winning streak to five games.

Ron Balaskovitz, sports editor of The Sand Mountain Reporter, and Greg Bell, special to The Jackson County Sentinel, contributed to this report.