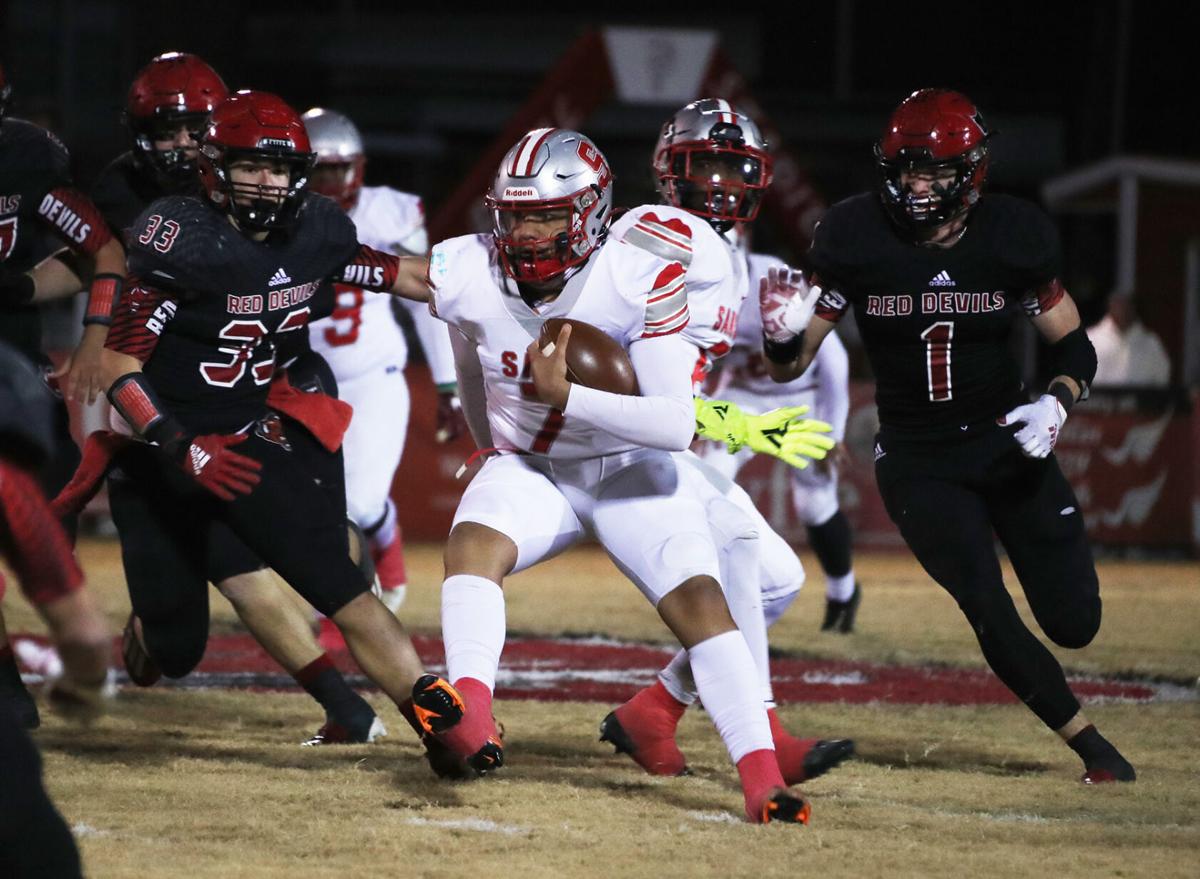 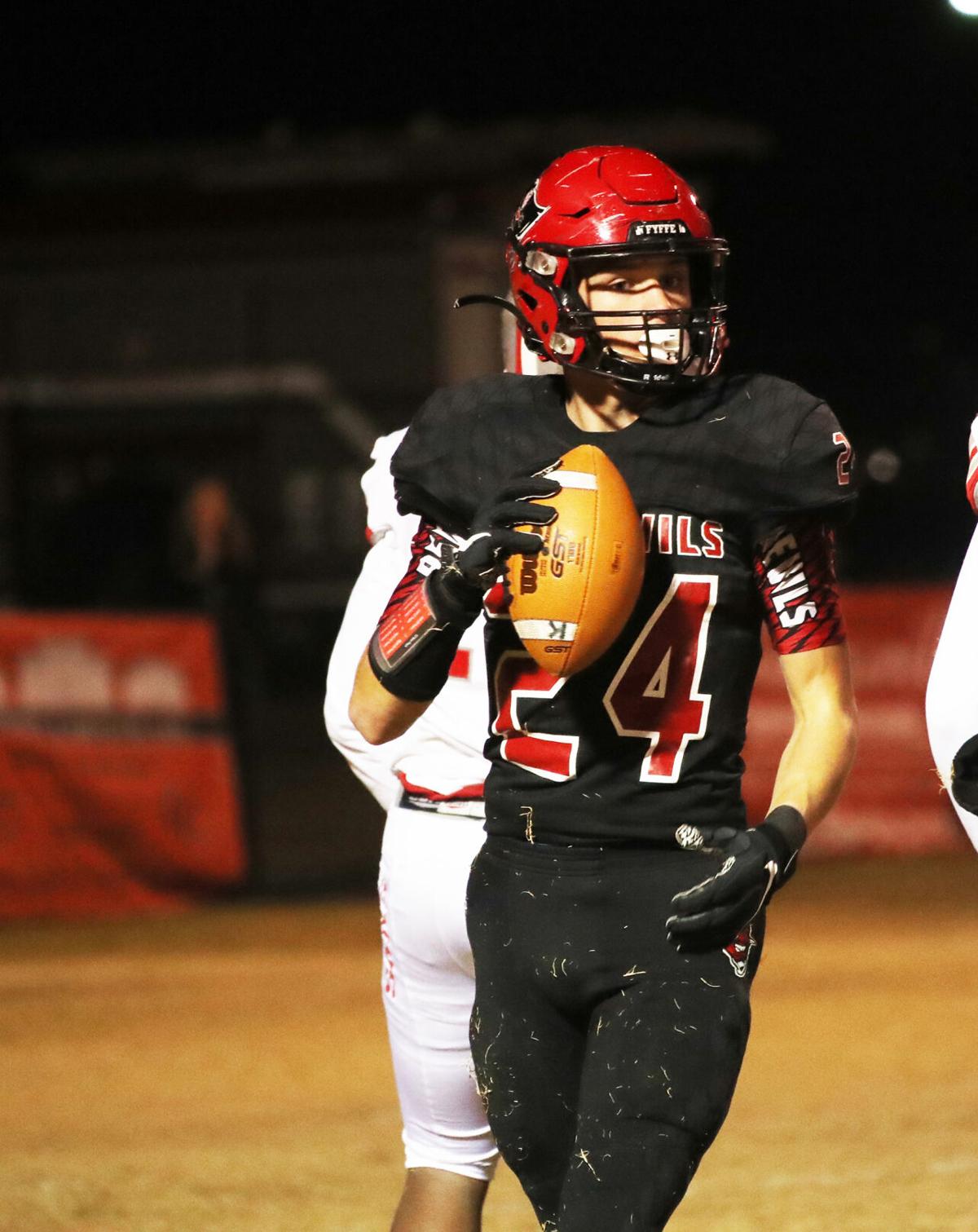 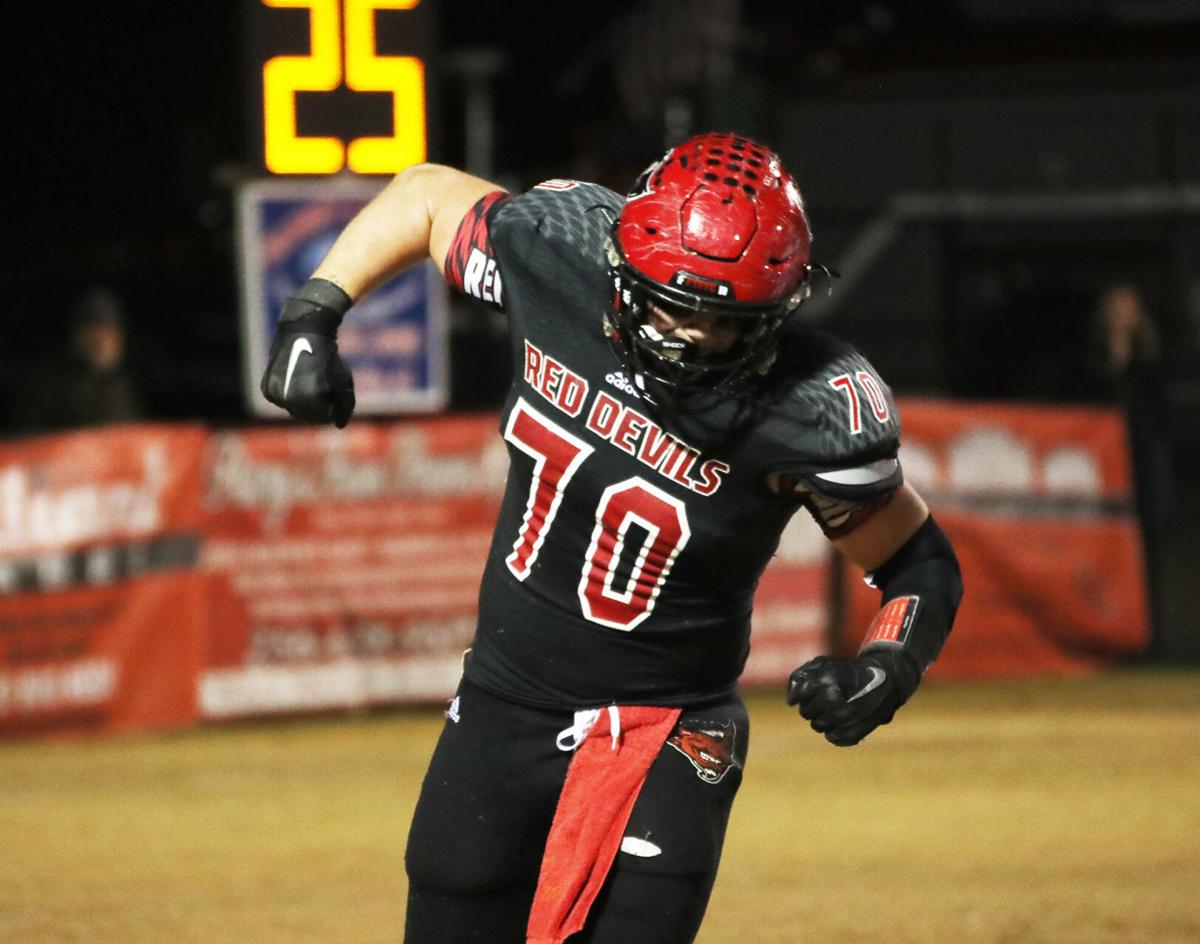 Fyffe’s Tucker Wilks celebrates after his team recovered a Saks fumble during the first half last Friday night.

Fyffe’s Tucker Wilks celebrates after his team recovered a Saks fumble during the first half last Friday night.

In last Friday night’s AHSAA Class 3A state quarterfinal-round game at Paul Benefield Stadium, Fyffe’s defense was challenged by a dual-threat quarterback behind a sturdy offensive line and an offense that could pass as well as run.

While Region 5 champion Saks was pass-heavy in gaining a lead in the first half, the team went run-heavy in the second half, ticking time away from Fyffe’s offense and closing the defending 3A state champions’ season with a 14-7 loss at Paul Benefield Stadium.

For the Wildcats (12-1), quarterback Sean Parnell was the key. He completed 15 of 24 passes for 124 yards, while rushing for 83 yards and two touchdowns on 20 carries.

“It’s tough to defend a quarterback running and throwing,” Fyffe head coach Paul Benefield said after his team finished with a 10-2 record and the Region 7 championship. “We saw him throwing it well on film. They had a couple of turnovers that kept us in the game. It’s just tough to defend all of those guys with speed — that offensive line was pretty good too. Just a good team.”

After turning the ball over on their opening series, the Wildcats used 11 plays to travel 62 yards for the only scoring of the first half. Parnell connected with wide receiver Jalen McCants four times during the drive for gains of 10, 14, 6 and 9 yards.

Parnell ran to the left for a 3-yard pickup to Fyffe’s 4-yard line, before scoring on another run to the left with 1:51 remaining in the opening frame. The Saks QB then found receiver Deniro Goode floating across the middle for a 2-point conversion connection.

Fyffe’s Tucker Wilks pressured Parnell into delivering an incomplete pass and forcing a punt with 8:46 to play until halftime. The ensuing punt attempt was blocked by Fyffe’s special teams defense pushing a Saks player into the punted ball. The Red Devils recovered on the Saks 12.

Parnell made some noise on the defensive side when he came out of a goal-line pile with the ball that Kyle Dukes was running with behind blockers. Parnell raced along the left sideline before being tackled at Fyffe’s 37-yard line.

Parnell’s defensive play put the Wildcats in scoring position on Fyffe’s 12, before a fumble on a catch attempt was recovered by Wilks, giving the ball back to Fyffe with less than 4 minutes to play in the half.

The Red Devils’ ensuing drive ended with a turnover on downs on their own 37 with 54 seconds until intermission.

Trailing 8-0 to begin the second half, Fyffe’s offense drew two penalties that led to a fourth-and-8 situation and a turnover on downs.

“As bad as we’d played, we were just behind 8-0, so I felt pretty good,” Benefield said. “We came out and got two penalties that killed us, lining up wrong. But we couldn’t stop them when we needed to, either. They didn’t score sometimes, but they controlled the clock.”

Controlling the clock with a heavy dose of the run game, Saks extended the lead to 14-0 on its first possession of the third quarter.

Doing their best Fyffe impression, the Wildcats drove 49 yards in 10 plays using all run plays. Parnell capped the series with a 2-yard scoring dive to the left side at the 3:48 mark.

The Red Devils did thwart Saks’ following 2-point conversion attempt, but not before the visiting team had dissolved 8 minutes of game clock.

After forcing a quick three-and-out early in the fourth, Fyffe’s offense spent 4 minutes driving down for its lone score with 5:20 left. Dukes scored on a 2-yard run and a Yahir Balcazar kick made it a one-score game.

However, Saks continued draining the clock by picking up three first downs to advance.

Saks finished with 241 yards of offense to Fyffe’s 184 and 18 first downs to eight for Fyffe.

After the game, Benefield reflected on the job his five senior players (Dukes, Will Stephens, Elisha Stiefel, Austin Mulligan, Will Edge) have done this season and the success they’ve helped bring to the program across its three-year run as a state champion.

“Those guys have won a lot of football games,” Benefield said. “We’ve shaken hands with a lot of people when we’ve won. We’re going to shake (the Wildcats’) hands and lose with class. Win with class, lose with class. Mighty proud of my seniors; they’ve hung tough.”