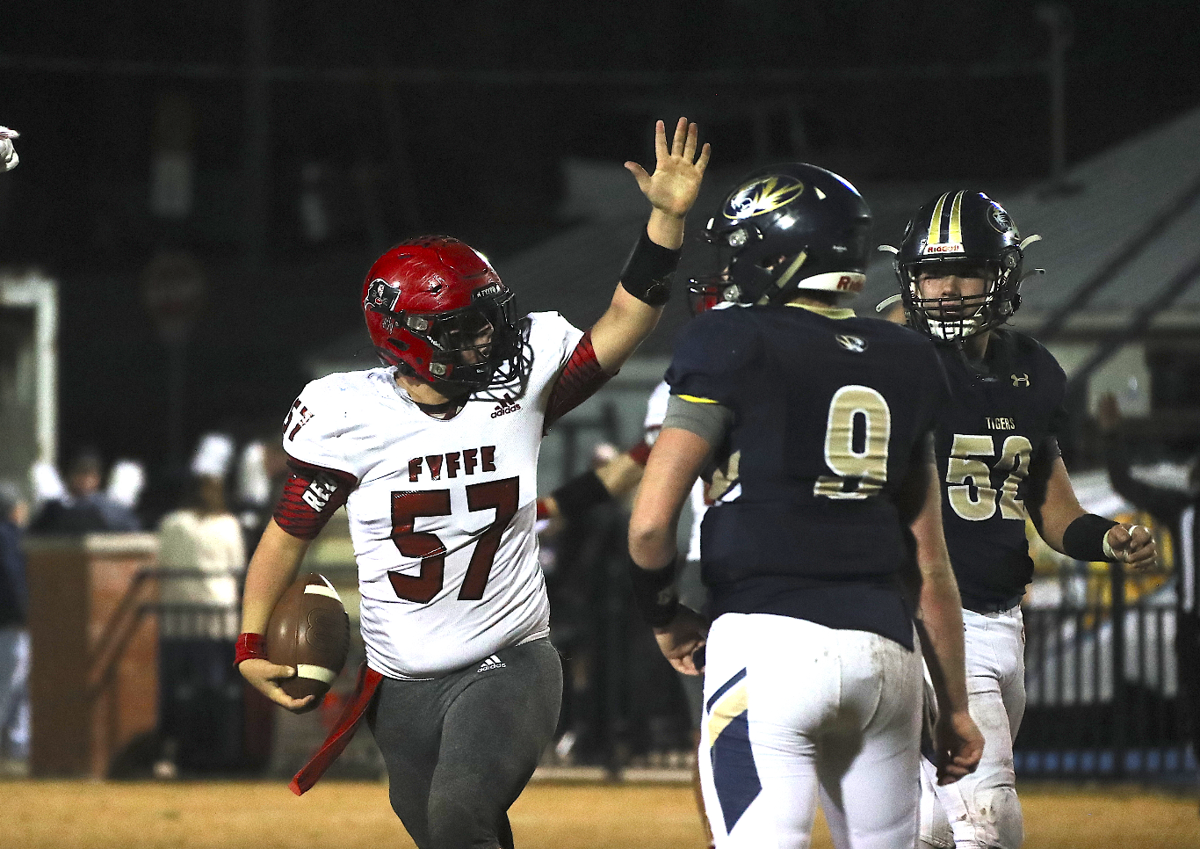 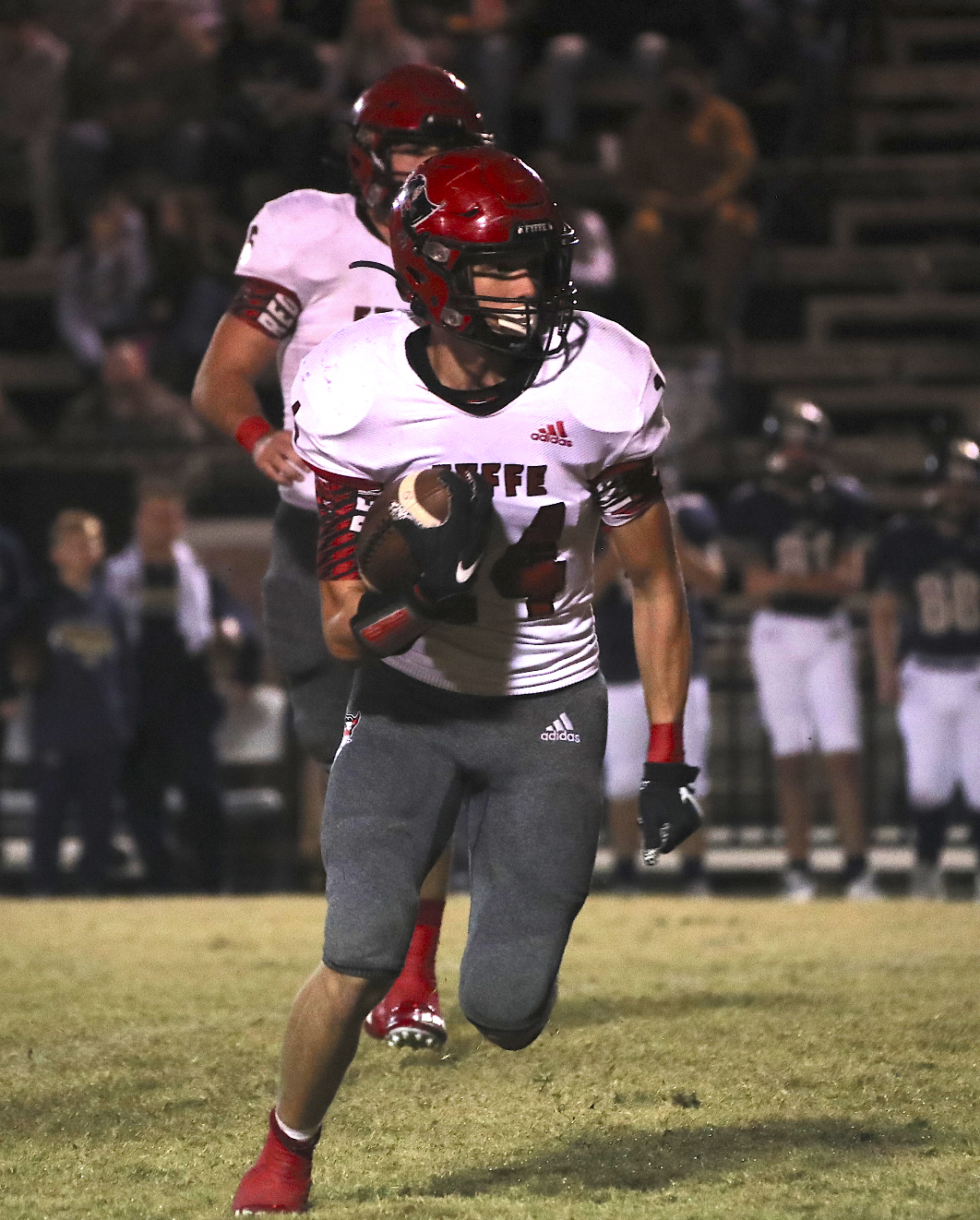 Fyffe’s Logan Anderson carries the ball around the right side during a second-round state playoff game against J.B. Pennington in Blountsville on Friday night. Fyffe’s Kyle Dukes pitches the ball to a teammate during the first half of a second-round state playoff game against J.B. Pennington in Blountsville on Friday night.

Fyffe’s Logan Anderson carries the ball around the right side during a second-round state playoff game against J.B. Pennington in Blountsville on Friday night.

Fyffe’s Kyle Dukes pitches the ball to a teammate during the first half of a second-round state playoff game against J.B. Pennington in Blountsville on Friday night.

The Big Red Machine got rolling early and made quick work of its AHSAA Class 3A second-round opponent.

Logan Anderson and Kyle Dukes ran for two touchdowns apiece and Will Stephens added another, as the Fyffe Red Devils stormed past the J.B. Pennington Tigers 43-14 in the second round of the 3A state playoffs at W.R. Sutton Memorial Stadium in Blountsville on Friday night.

“It was a complete performance,” Fyffe head coach Paul Benefield said. “I thought we played well on both sides of the ball, blocked well, tackled well. And I’m just mighty proud of them.”

Fyffe (10-1), the Region 7 champion and defending 3A state champion, advanced to the state quarterfinal round, hosting Saks at 7 p.m. next Friday. Saks, Region 5’s champion, defeated Oakman 36-22 on Friday night.

In Blountsville on Friday night, Anderson scored two rushing touchdowns as Fyffe took a commanding 30-0 halftime advantage against the Tigers (8-4), a No. 3 seed from Region 6.

It took the Red Devils two plays to score on their opening drive. On the second snap from scrimmage, Anderson took the handoff up the middle, picking up blocks and racing 47 yards for the touchdown. Dukes’ attempted 2-point conversion run failed.

Fyffe surrendered possession on downs on its second series, but used 10 plays to travel 61 yards for a score on its next try. A 5-yard run by Dukes on first-and-goal yielded a touchdown at the 10:11 mark of the second quarter. Brodie Hicks followed with a successful 2-point conversion run to make it 14-0.

Anderson capped an eight-play, 52-yard drive with 5:15 remaining in the half. He rushed up the gut of the offensive line for a 10-yard score. Dukes ran to the right and scored on the ensuing 2-point try, pushing the Red Devils into a 22-0 lead.

Jake Wooden recovered a Pennington fumble on the Tigers’ 45-yard line and Fyffe’s offense capitalized in eight plays. Stephens made a sweeping run to the left side, scoring from 6 yards out with 15 seconds left. Dukes rolled right and found Austin Mulligan for a 2-point reception.

“Scoring early set the tone,” Benefield said. “We played physical. We contained (the Tigers) at times, at times we didn’t. But they have a good team, a good program.”

After a Mulligan sack on third down forced the Tigers to punt their opening second-half drive, the Red Devils added to their comfortable lead. Dukes ripped off a 60-yard scoring run and Yahir Balcazar kicked an extra point with 4:52 left in the third to give the visitors a 37-0 cushion.

With 2 seconds left in the third, Hicks scored his first rushing touchdown of the game. A missed extra-point kick kept the score 43-0.

Pennington reached the end zone with 7:52 remaining in the game. After Hayden Floyd connected with Carter Heptinstall for a first down to Fyffe’s 21-yard line, Floyd hooked up with Heptinstall again, floating a pass into the right-back corner of the end zone. The Tigers missed the ensuing extra-point kick attempt.

The Tigers struck again with 2:25 left, as a Floyd-to-Heptinstall connection gained 45 yards before Floyd capped the drive with an 11-yard rushing score. The PAT kick was good.