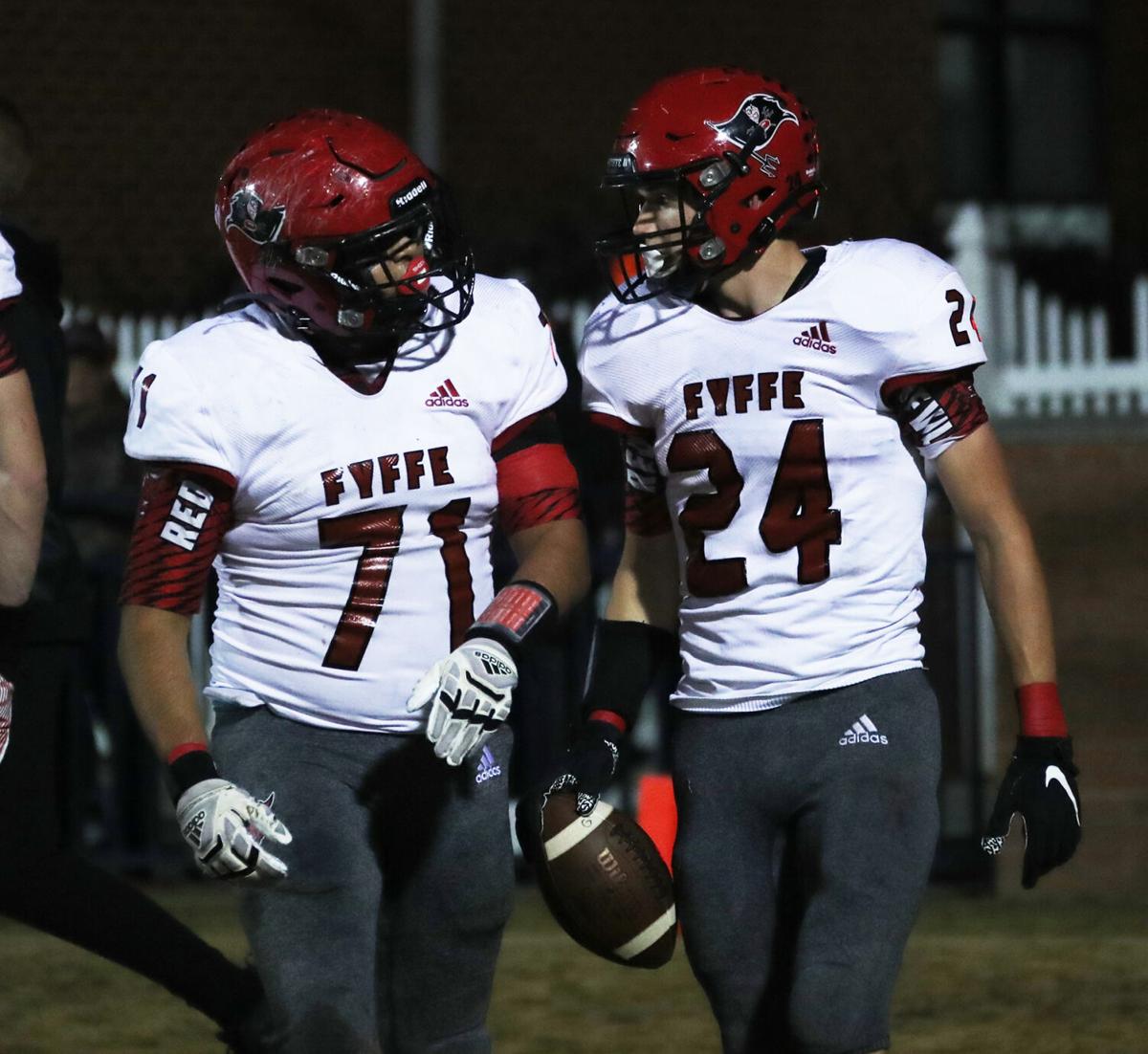 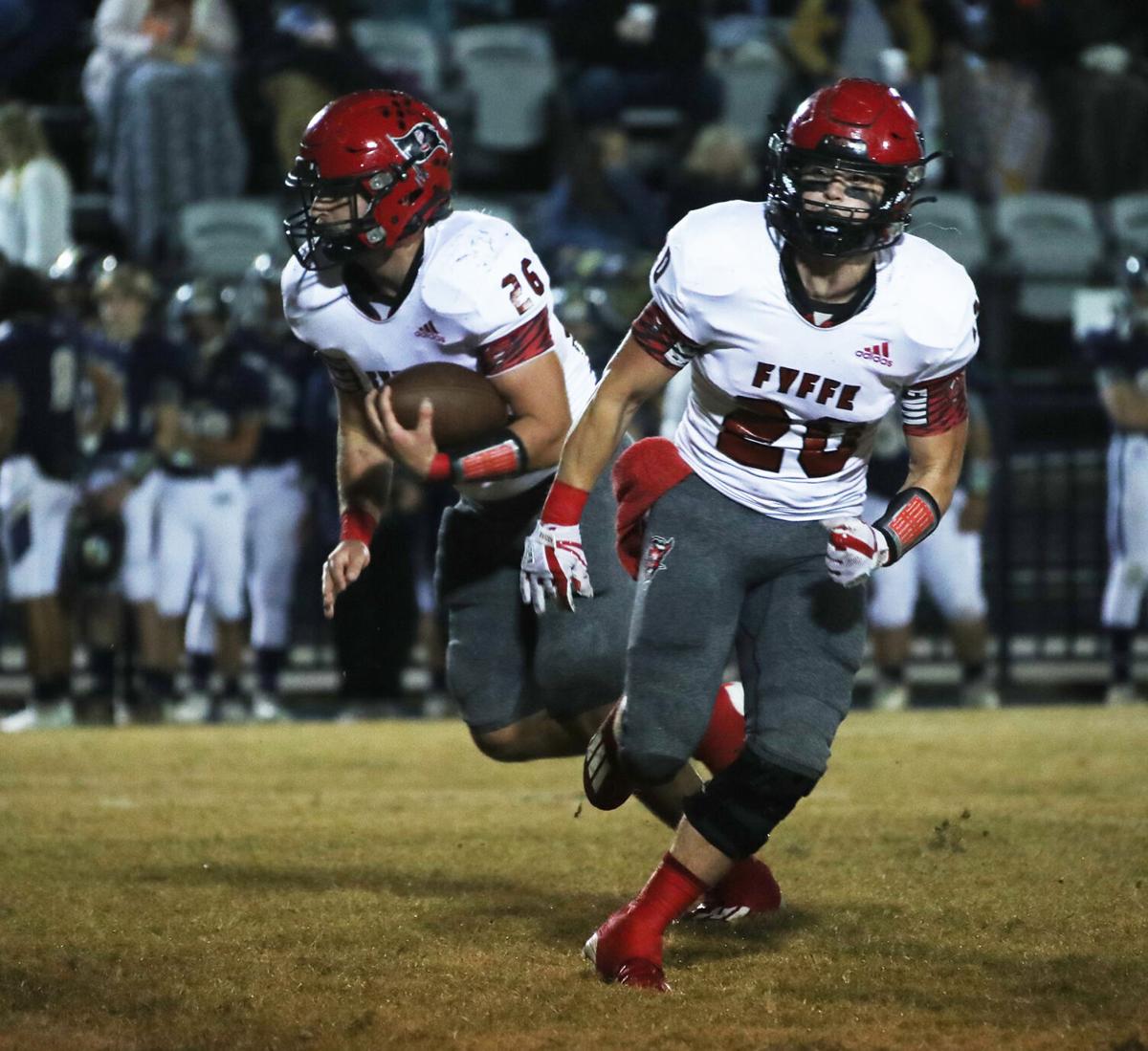 Fyffe's Kyle Dukes (26) carries the ball up the middle as teammate Will Stephens runs out to block. 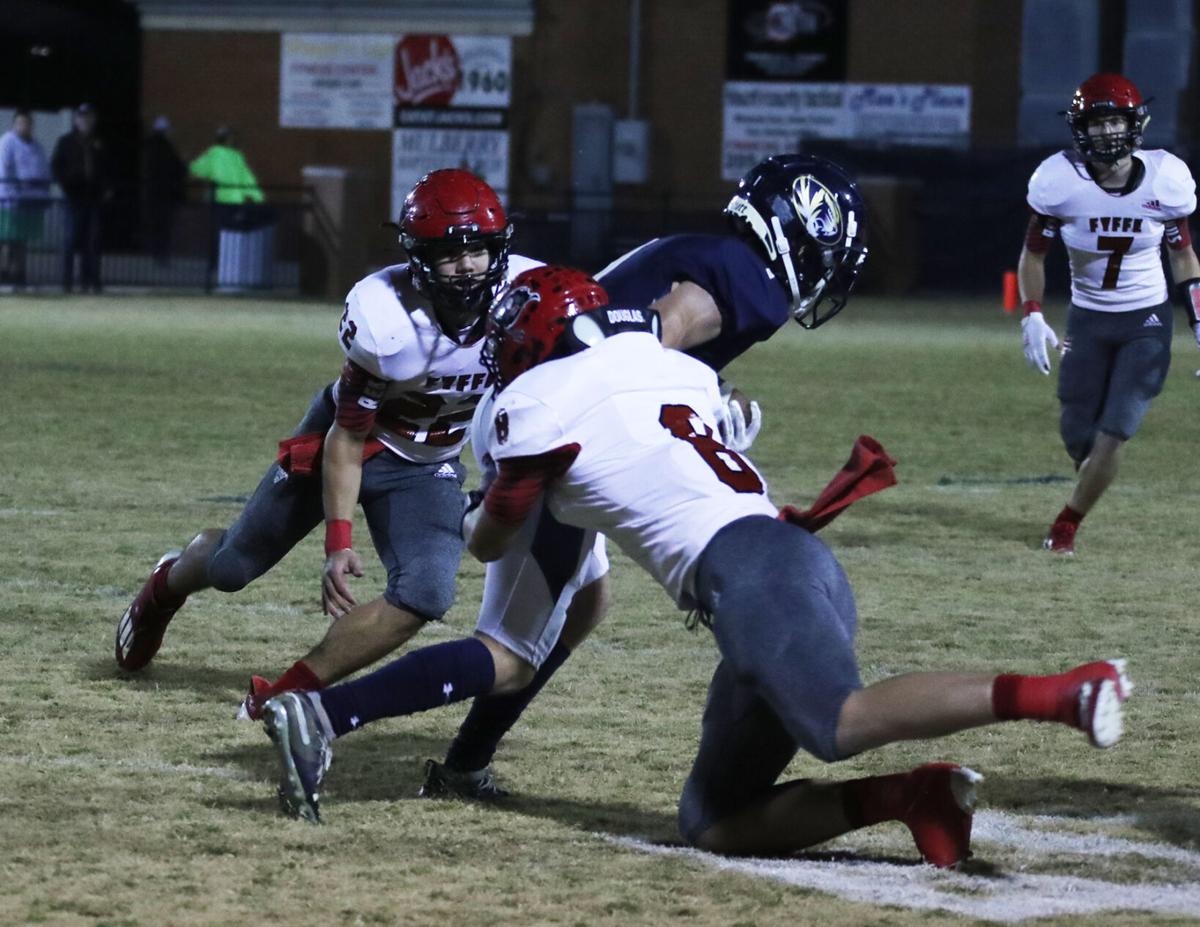 Fyffe's Kyle Dukes (26) carries the ball up the middle as teammate Will Stephens runs out to block.

The Fyffe Red Devils host the Saks Wildcats for a spot in the 3A semifinal round at Paul Benefield Stadium at 7 p.m. Friday.

“We’ll do what we’ve been doing. What else can we do?” Red Devils head coach Paul Benefield said of preparation for the Wildcats. “(Saks) is a great team and has some talent; we know that and saw the bracket when we started.

“We’re at home, so we feel good about playing anybody at home.”

Coming off a 43-14 rout of J.B. Pennington, 10-1 Fyffe continues its pursuit of claiming a second consecutive 3A state championship and fourth state title in a row.

Logan Anderson and Kyle Dukes ran for two touchdowns apiece and Will Stephens added another, as the Red Devils romped past the Tigers in the second round of the 3A state playoffs at W.R. Sutton Memorial Stadium in Blountsville last Friday night.

The Red Devils, the Region 7 champion, amassed 402 yards rushing in the win and led 30-0 at halftime behind a balanced rushing effort from the trio of Dukes, Anderson and Brodie Hicks.

“I try to rotate tailbacks to keep them fresh,” Benefield said. “Kyle Dukes has run heavy all year long — he’s a bulldozer. And Brodie and Logan complement each other. Brodie runs hard and Logan runs hard too. Those guys are just getting better and better.”

According to Fyffe’s official stats for the 2021 season through 11 games, Anderson has collected 950 yards rushing on 104 carries with 11 touchdowns and Dukes has carried 129 times for 926 yards and 19 scores, while Hicks has gained 608 yards on 96 attempts with 12 touchdowns on the ground.

The Red Devils have outscored opponents 434-93, averaging 40 points per game vs. nine points per contest from their opposition. While opponents have committed a total of 21 turnovers, Fyffe has limited its number to five, while outrushing the opposition 3,610 yards to 650.

Sean Parnell passed for 183 yards, rushed for 108 yards and accounted for all five touchdowns for the Wildcats. Parnell, who touched the ball on every snap, had touchdown runs of 2, 6 and 6 yards and tossed scoring passes of 57 yards to Shon Elston and 51 yards to Jalen McCants.

Saks’ lone defeat of the season was 28-12 against Piedmont, the No. 3 seed from Region 5 who plays Winfield for a shot at the Saks/Fyffe winner in the next round.

Common opponents between Fyffe and Saks include: Sylvania, Walter Wellborn, Geraldine and Plainview.

Saks ousted Plainview 46-43 in the opening round of the postseason Nov. 5.

According to the Alabama High School Football Historical Society’s website, Fyffe and Saks have not played against each other in either a regular-season or postseason contest.

The Wildcats are led by head coach Jonathan Miller in his 10th season at the helm of the program. Entering Friday’s game, Saks has averaged 40 points per contest while allowing an average of 17 per game.

Last season, the Wildcats were bounced from the postseason after a 38-20 loss to Piedmont in the state quarterfinal round.