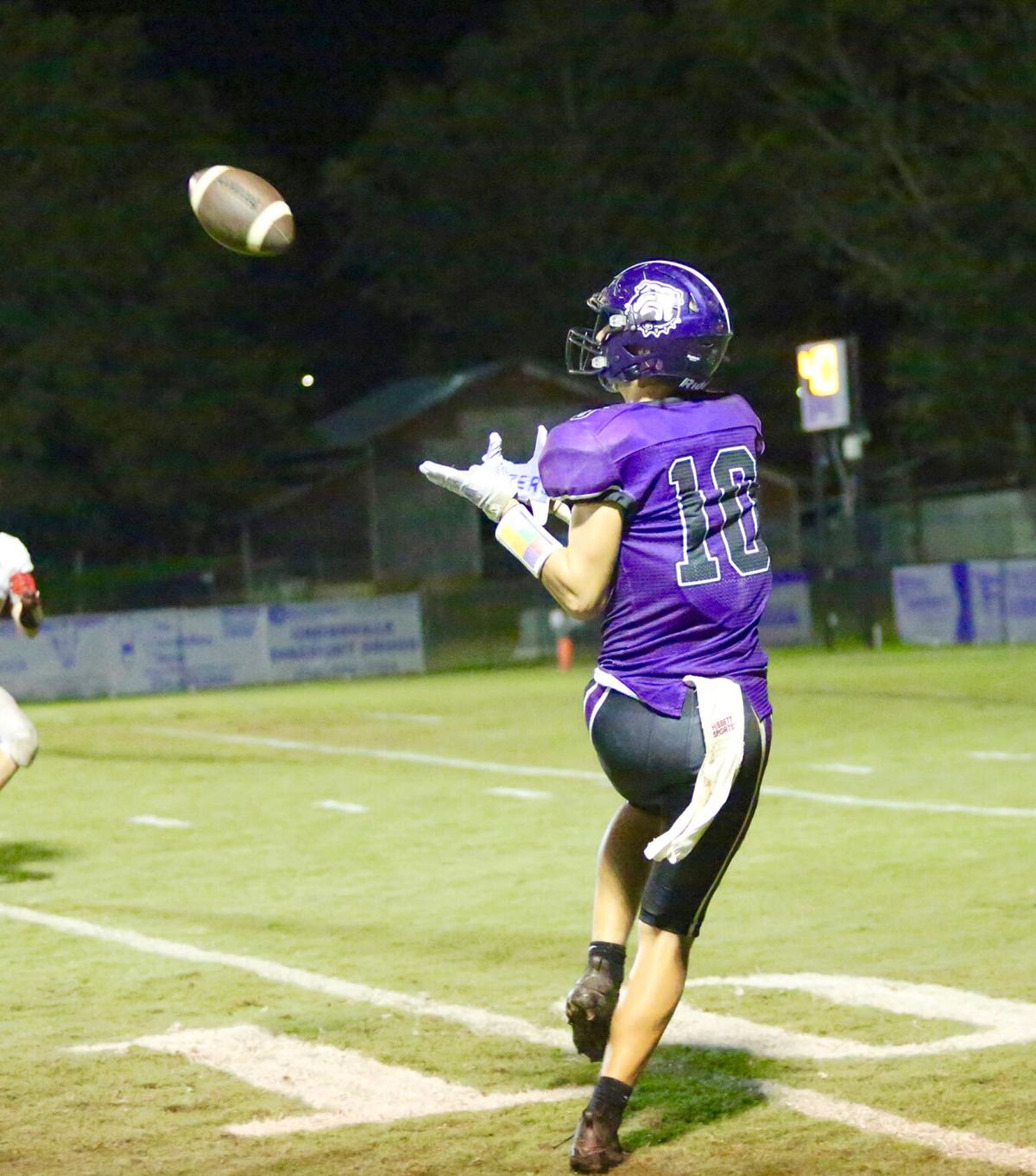 Geraldine's Colton Lusher reels in a touchdown pass against Fyffe in a Class 3A, Region 7 game at Coolidge-Isbell Field last Friday night. 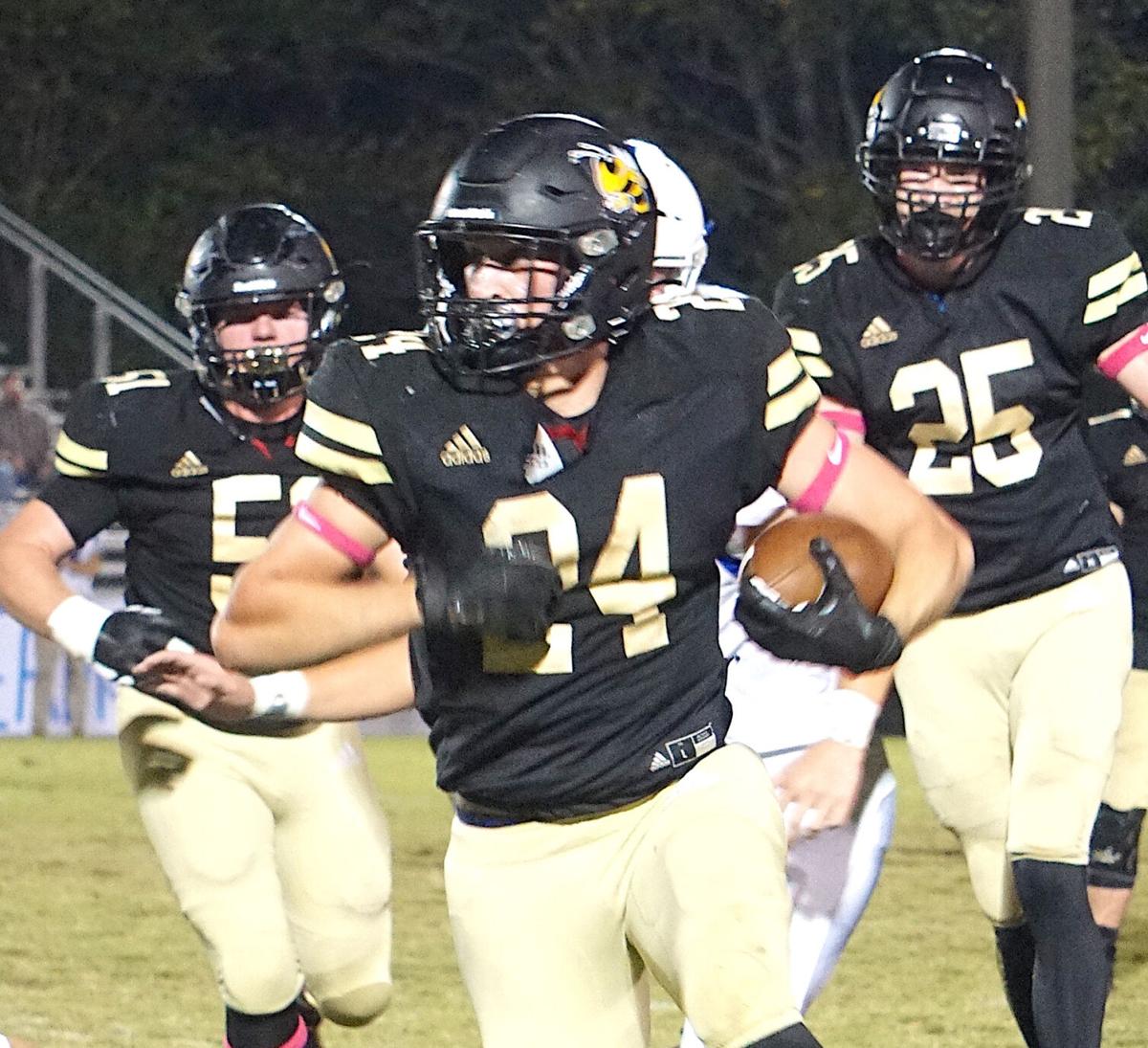 Geraldine's Colton Lusher reels in a touchdown pass against Fyffe in a Class 3A, Region 7 game at Coolidge-Isbell Field last Friday night.

Defensively, Joe Garcia collected 10 tackles, Colvin had nine and Kobe Hill and Will Arnold each finished with eight stops.

The Bulldogs visit a Collinsville team coming off a 31-6 triumph against Asbury — according to the Alabama High School Football Historical Society’s website, Geraldine has won the last 12 meetings vs. Collinsville and leads the all-time series 36-30-5.

Keaton DeBoard rushed 11 times for 280 yards and three touchdowns. He tossed a 42-yard scoring pass to Colton Wills, as the Panthers improved to 3-5 overall and 2-3 in region play.

The Panthers scored on their first four possessions, leading 28-0 at halftime.

Asbury scored a touchdown with 35 seconds left in the game on a 30-yard pass from Gavin Johnson to Dante Broussard.

In the first meeting between Ider and Whitesburg Christian in 2020, Ider won 48-30.

Last week, North Sand Mountain routed the Warriors 39-6, dropping them to 2-6 overall and 0-5 in region competition.

The Warriors’ wins include a 51-28 triumph against 3A Asbury and a 61-14 victory against 1A Shoals Christian.

Whitesburg Chrstian coached by Jimmy Nave in his first season leading the program.

In a return from a bye week, the Valley Head Tigers host the Sumiton Christian Eagles in a 1A, Region 7 finale at 7 p.m. Friday.

The Tigers enter with a 3-5 overall record and a 3-2 mark in region play, having defeated Coosa Christian 21-14 in their last game Oct. 8.

Heading into this week’s games, Cedar Bluff leads the region with a 5-0 record. Sumiton Christian sits in second place with a 4-1 record, and Valley Head and Coosa Christian are tied for the third spot at 3-2.

According to the Alabama High School Football Historical Society’s website, Valley Head and Sumiton Christian have met just once in the history of the two programs. In last year’s inaugural contest, the Tigers won 41-6.

The Eagles’ lone loss this season was 21-14 against Cedar Bluff.

In a 5A, Region 7 finale for both teams, Crossville hosts Douglas at Crossville Memorial Stadium at 7 p.m. Friday.

The winless Lions are coming off a 44-22 defeat to Sardis from last Friday night, falling to 0-8 and 0-5 in region play.

Guntersville leads the region with a 5-0 record, while Fairview is 4-1, Boaz is 4-2 and Douglas and West Point each have 2-3 records entering Friday’s games. Crossville remains the only winless team in the region.

In the all-time series against Douglas, Crossville leads 32-9 but has lost the last five meetings, according to the Alabama High School Football Historical Society’s website.

The Fyffe Red Devils look for a strong finish to their region schedule when they visit the Asbury Rams this week.

The Red Devils kick off with Asbury at 7 p.m. Friday in Albertville.

The Red Devils own a 5-0 series record against Asbury, according to the Alabama High School Football Historical Society’s website.

Collinsville scored on its first four possessions and raced to a 28-0 halftime advantage.

The Plainview Bears travel to Guntersville to play the Brindlee Mountain Lions in a 3A, Region 7 finale at 7 p.m. Friday.

According to the Alabama High School Football Historical Society’s website, Plainview is 11-0 all-time against Brindlee Mountain.

The Bears are coming off a 49-31 loss against Sylvania.

Dylan McCullough ran for two touchdowns behind 67 yards, Noah White rushed for 72 yards and one score and Sam Crowell added a 4-yard scoring run for Plainview.

Joseph Buchanan caught four passes for 128 yards, while White threw for 158 yards with two interceptions and no touchdowns.

With all region games behind them, the Sylvania Rams travel to play the East Limestone Indians at 7 p.m. Friday.

In last week’s 49-31 victory against 3A, Region 7 rival Plainview, the Rams produced 487 yards of offense behind Brody Smith’s 301 yards passing and six touchdowns.

Smith completed 15 of 20 attempts and finished with no interceptions, while targeting Sawyer Hughes four times for 130 yards and four scores. Smith completed six passes to Zack Anderson for 89 yards and two touchdowns, as Sylvania won its fourth game in a row, bumping its overall record to 6-2 and a region-leading 5-1 mark.

The Indians, a 5A program, took a 42-0 loss against Russellville last week, ending a two-game win streak.

Led by head coach Jeff Pugh in his 16th season with the program, East Limestone hosts the Rams with a 5-4 overall record.

The Cornerstone Christian Academy Eagles return to Rodeo Field for their regular-season finale, hosting the Tabernacle Christian Torches in Rainsville at 7 p.m. Friday.

Cornerstone enters Friday’s game following a 52-18 loss against Evangel, dropping its record to 3-3.

Israel Phillips returned a kick 72 yards for a touchdown and collected 161 yards in kick returns.

Henry Harrison led the Eagles’ defense with nine total tackles (six solo), including a sack. Carter, McGullion and Phillips each recorded an interception.