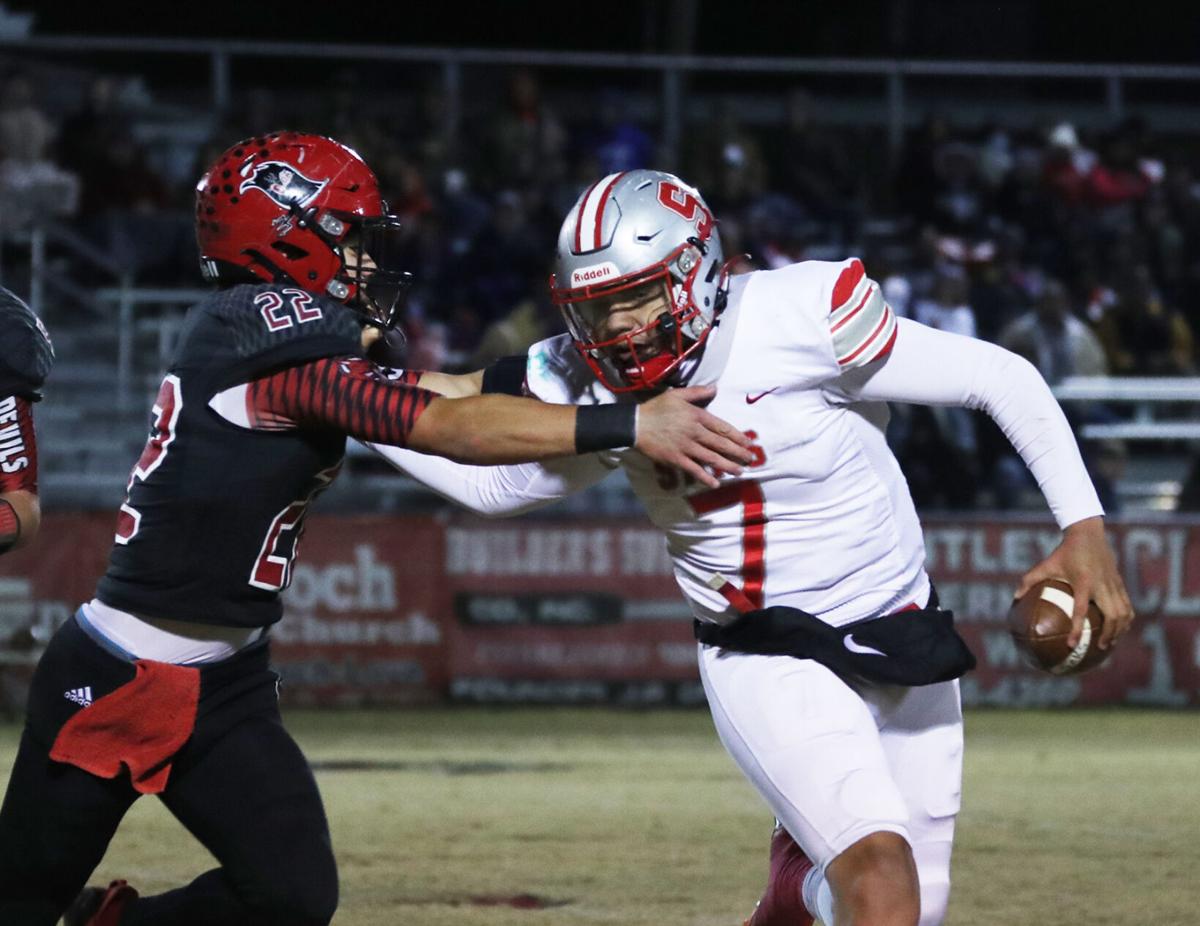 Fyffe’s Brodie Hicks (22) pursues Saks’ Sean Parnell during the first half of an AHSAA Class 3A state playoff game at Paul Benefield Stadium on Friday night. 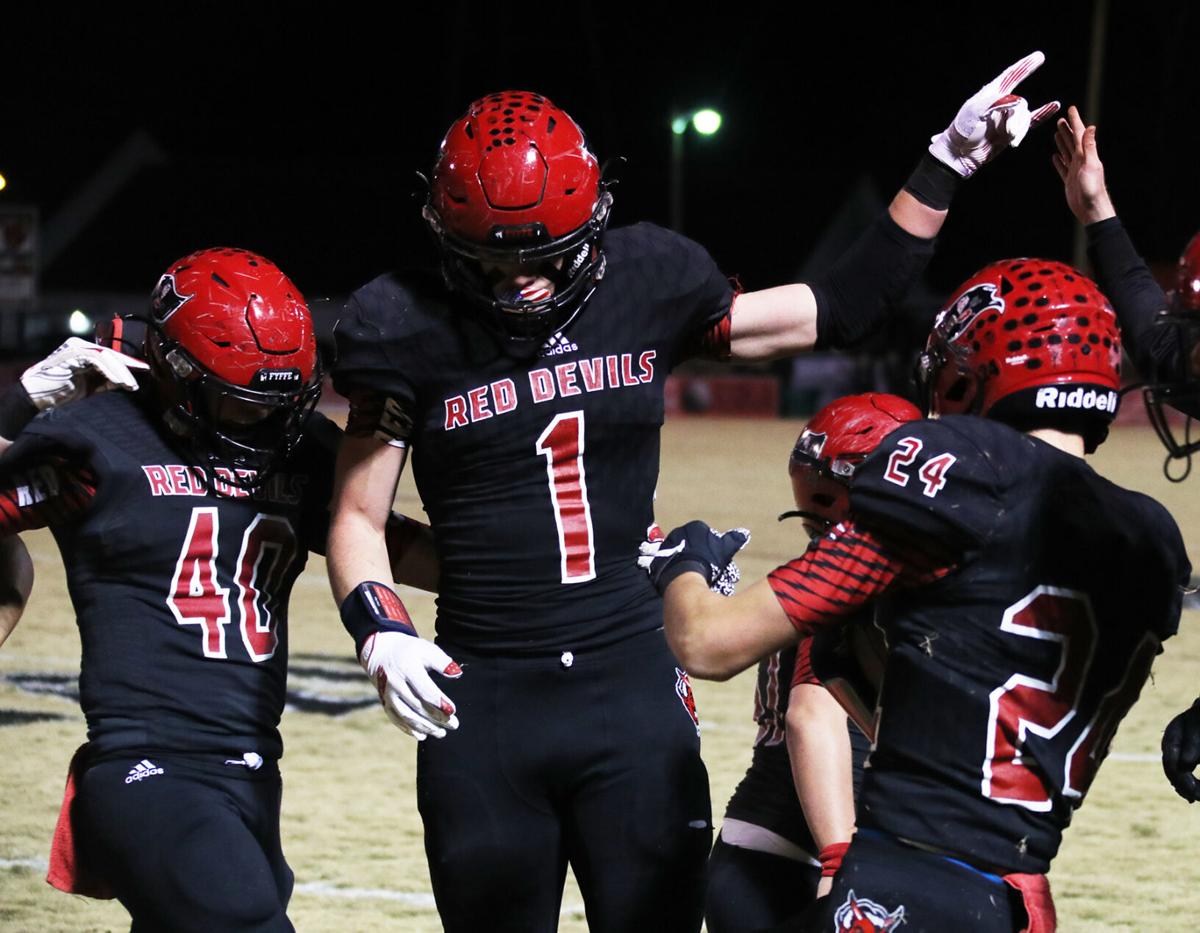 Fyffe’s Owen Blackwell (40), Austin Mulligan (1), Logan Anderson (24) and others gather around the ball after forcing a turnover against Saks on Friday night.

Fyffe’s Brodie Hicks (22) pursues Saks’ Sean Parnell during the first half of an AHSAA Class 3A state playoff game at Paul Benefield Stadium on Friday night.

Fyffe’s Owen Blackwell (40), Austin Mulligan (1), Logan Anderson (24) and others gather around the ball after forcing a turnover against Saks on Friday night.

Even when the Red Devils trailed 8-0 at halftime — something the Big Red Machine hasn’t done all season — against the dual-threat Saks Wildcats in Friday night’s quarterfinal round of the AHSAA Class 3A state playoffs, the veteran head coach knew the game was still up for grabs.

“When your kids play hard and do the best they can do and you finish 10-2 in the quarterfinals, you have to be proud of them,” Benefield said after Fyffe closed the season with a 10-2 record. “...There’ll be another day for Fyffe.”

After passing for much of the first half, the Wildcats began the third quarter with nothing but run plays, controlling the clock in the process. Following a Fyffe turnover on downs, Saks took possession at the Red Devils’ 49-yard line.

The Wildcats used a 10-play drive that spanned 8 minutes, ending with a Parnell 2-yard touchdown dive on third-and-goal. The ensuing 2-point conversion run attempt failed and the visitors led 14-0 with 3:48 left in the third.

Following a punt early in the fourth, the Red Devils traveled 41 yards in 10 plays on their next series and Kyle Dukes rushed up the middle for a 2-yard score with 5:20 to play in regulation. Yahir Balcazar’s extra-point kick pulled Fyffe within seven.

Parnell and the Saks offense went back to work ticking time off the clock with run play after run play and a key first-down throw to Shon Elston for a 13-yard pickup with 4 minutes left. A Parnell first-down run of 2 yards at the 1:13 mark sealed the win.

“(The Wildcats) were too big and physical for us at times, and when we had a chance to do something, we’d stomp our toes a little bit,” Benefield said. “We had a few things we’d schemed up during the week that we thought might work, but it was just a game of opportunities and they really controlled the line of scrimmage. They were the best team tonight. Our guys played hard, but you just lose sometimes.”

In the first half, Parnell’s 4-yard scoring run capped an 11-play, 62-yard drive that included a pair of third-down conversions. Parnell found Deniro Goode for a 10-yard gain on third-and-6 from Fyffe’s 34-yard line before the touchdown.

After the Wildcats were flagged for a false start ahead of their 2-point attempt, Parnell hit Goode flying across the end zone for the conversion and an 8-0 lead with 1:51 remaining in the opening period.

Saks fumbled twice and Fyffe fumbled once during the first half, but neither side managed to turn them into points.

Logan Anderson recovered a Wildcat fumble on the Red Devils’ 31. But Fyffe’s ensuing drive ended in a punt.

Fyffe blocked a punt by pushing a Saks player into the ball at the 8:46 mark of the second quarter to start on Saks’ 12-yard line. Dukes tried to punch the ball across on fourth-and-goal from the 4, but Parnell came racing out of the pile of players with the ball. He returned it to Fyffe’s 37.

Fyffe’s Tucker Wilks also recovered a fumbled catch at the Red Devils’ 3. But Fyffe was unable to produce a score from it, turning the ball over on downs with 54 seconds until halftime.