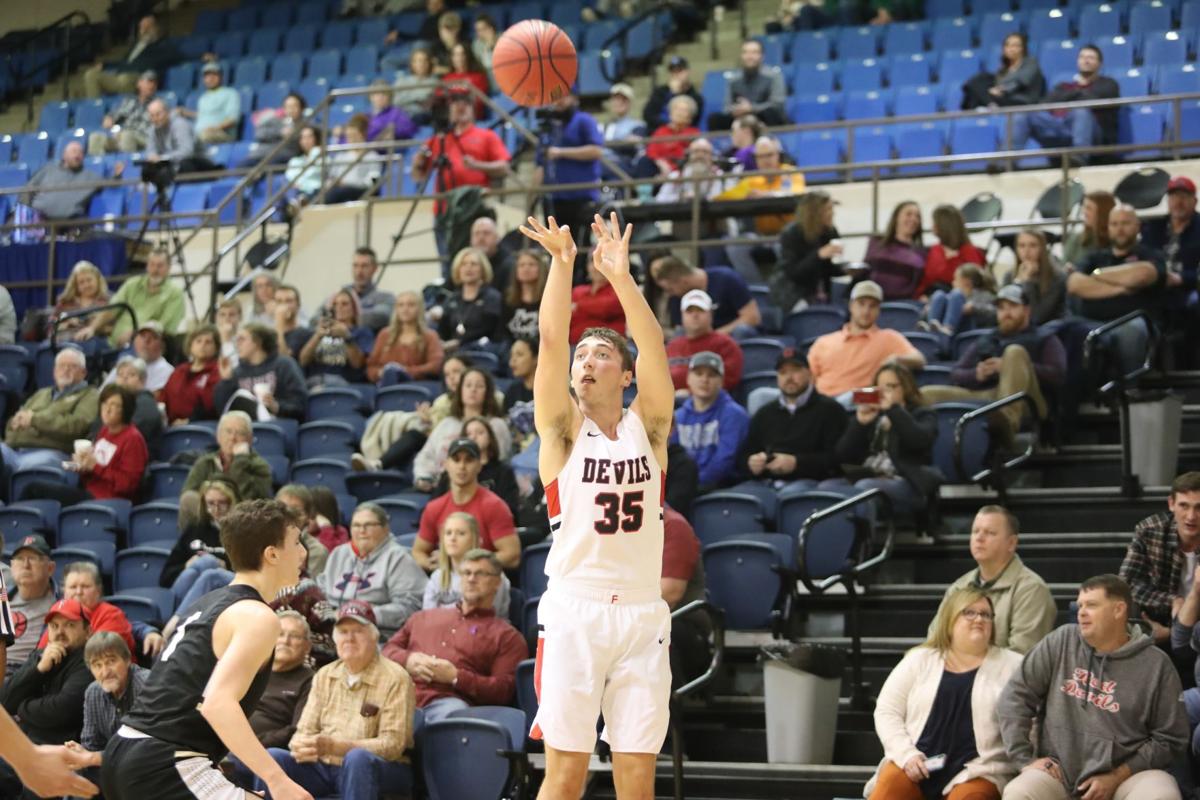 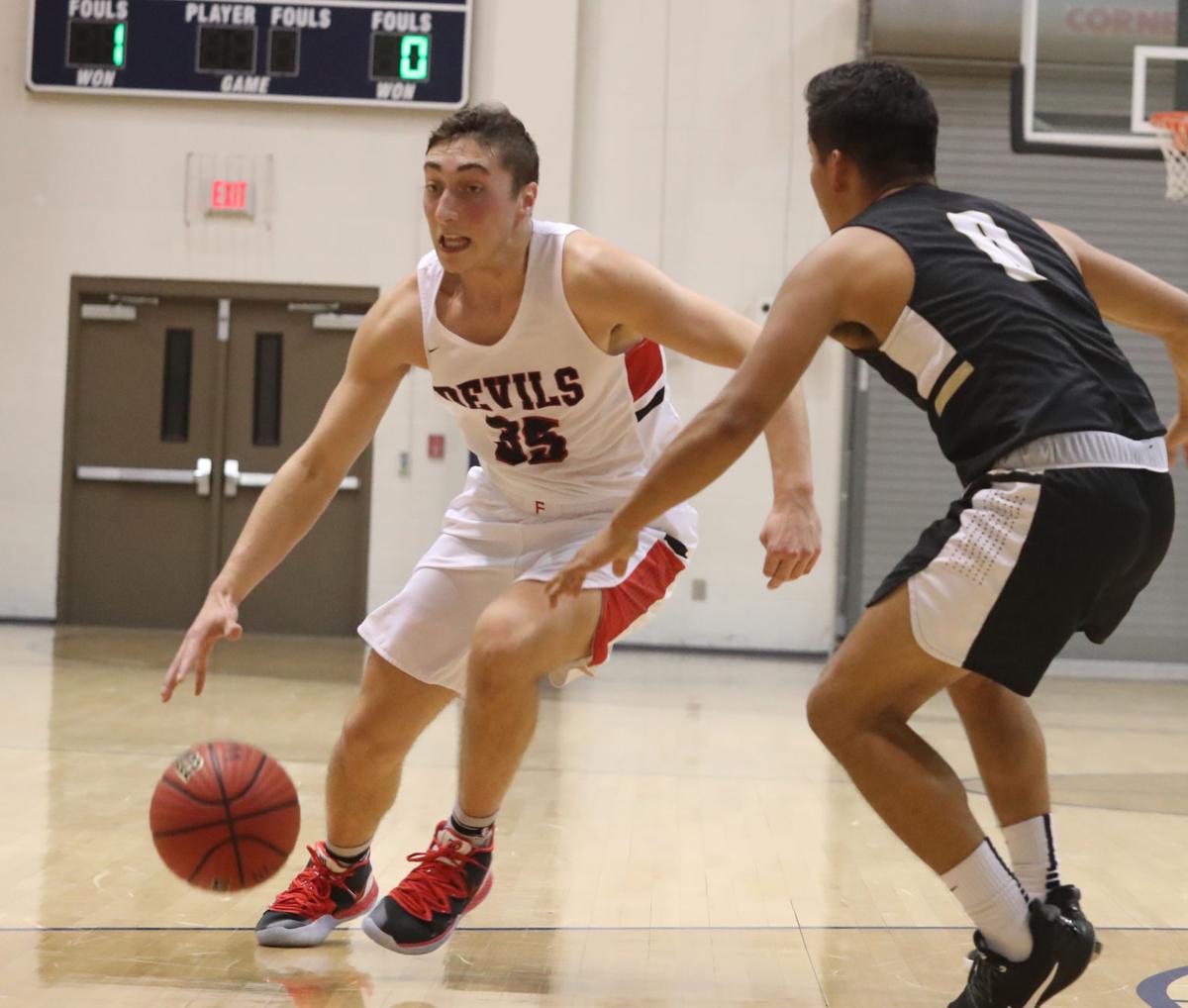 Fyffe senior Gabe Gardner (35) drives into the paint during a Sand Mountain Tournament game against Crossville at DeKalb County Schools Coliseum in Rainsville on Dec. 18, 2019. 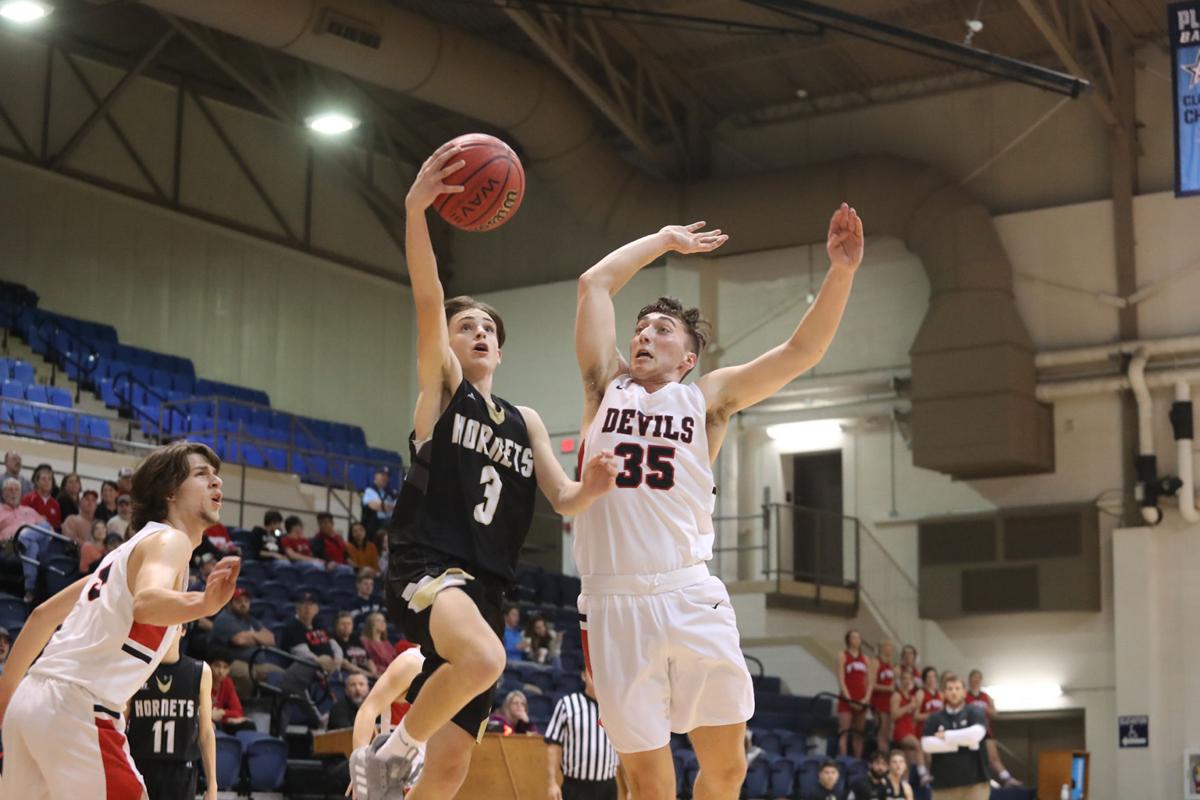 Fyffe’s Gabe Gardner (35) defends Ider’s Hunter Robinson (3) as teammate Micah Johnson looks on during a game in the DeKalb County Tournament at DeKalb County Schools Coliseum in Rainsville on Jan. 13.

Fyffe senior Gabe Gardner (35) drives into the paint during a Sand Mountain Tournament game against Crossville at DeKalb County Schools Coliseum in Rainsville on Dec. 18, 2019.

Fyffe’s Gabe Gardner (35) defends Ider’s Hunter Robinson (3) as teammate Micah Johnson looks on during a game in the DeKalb County Tournament at DeKalb County Schools Coliseum in Rainsville on Jan. 13.

FORT PAYNE — From the time Gabe Gardner could pick up a basketball, he was shooting.

As a senior member of Fyffe’s historic 31-win boys basketball team, Gardner shot into the Alabama High School Athletic Association’s elite with the best single-season 3-point-shooting percentage among all classifications with a 150-attempt minimum during the 2019-20 season.

“When I was first told, I was kind of shocked,” Gardner said of his 3-point feat. “I knew I had shot pretty well for the year, but just being told that out of all the bigger schools that I had the best (percentage) was crazy to hear.”

Gardner shot 47 percent from 3-point range this season, sinking 94 of 200 attempts. The achievement not only gave him the best 3-point-shooting percentage for the season, it marked his performance as fifth-best all-time in the category (the AHSAA record of 52.8 percent is held by Carver-Montgomery’s Dominique Smiley, accomplished during the 2007-08 season).

“Gabe’s always been a pretty good shooter,” Fyffe boys coach Neal Thrash said. “He had a really good percentage in his 10th-grade year. It dipped a little to around 32 percent last year because people started guarding him a little better.”

Gardner helped the Fyffe boys earn a program-best 31 wins, a DeKalb County championship, a 2A, Area 15 championship and an appearance in the Class 2A Northeast Regional at Jacksonville State this season.

“I tried to do everything I could to help win the games,” he said.

“We were all great friends on and off the court and we played so well together,” Gardner said of his teammates. “It was just a good group of guys to play with. We had a lot of fun times.”

The Red Devils began the season with 11 straight wins, capturing championship hardware from the Geraldine Thanksgiving Tournament in the process. Their first loss came against Plainview in the championship round of the annual Sand Mountain Tournament.

Fyffe peeled off an additional six wins in a row, including a Don Webb Sr. Classic championship win at Scottsboro High School, before taking its second loss of the season at North Sand Mountain.

Gardner and teammate Parker Godwin combined to score 56 points, as the Red Devils raced past Talladega in the Don Webb Sr. Classic title game. Gardner finished with a team-high 29 points and Godwin added 27 points, 10 assists and seven rebounds to help improve the team to 14-1.

“We were pretty good as a team, so there was not really one player you could isolate,” Thrash said. “So (Gardner) ended up getting a lot of good looks this year and knocking the bottom out of them.”

After being defeated by Plainview earlier in the year, the Red Devils returned to beat the Bears in the DeKalb County Tournament final. It was Fyffe’s first county championship since 2014. Plainview had won four of the last five county crowns.

The Red Devils climbed to No. 2 in the 2A state rankings and collided with LaFayette, the last remaining undefeated 2A team at the time, in the Northeast Regional semifinal round.

LaFayette proved to be too overwhelming and brought an end to the Red Devils’ postseason run.

“We knew LaFayette had a great team,” Thrash said after the semifinal loss. “We knew they had a lot of speed and quickness, and we knew they were going to be tough to guard. We were hoping they wouldn’t force us into as many turnovers as they did. We uncharacteristically turned it over quite a bit.”

Gardner signed a national letter of intent with Snead State Community College this offseason. The growth of COVID-19 pandemic concerns forced Gardner to stay ready for basketball season without being able to prepare how he wanted in a gym.

“I’ve just had to be in the weight room a lot more, getting bigger and stronger,” he said.

Gardner said his love for working outside has him prepared to major in landscape architecture at Snead.

In junior high school, Gardner played both baseball and basketball, before quitting baseball to focus solely on basketball.

“(Gardner) turned himself into a good all-around basketball player,” Thrash said. “Between his junior and senior year, I think he dropped like 15 pounds and got more muscular and trim about him. He got really serious about improving his game. All of those things had a factor into him becoming a better player.”