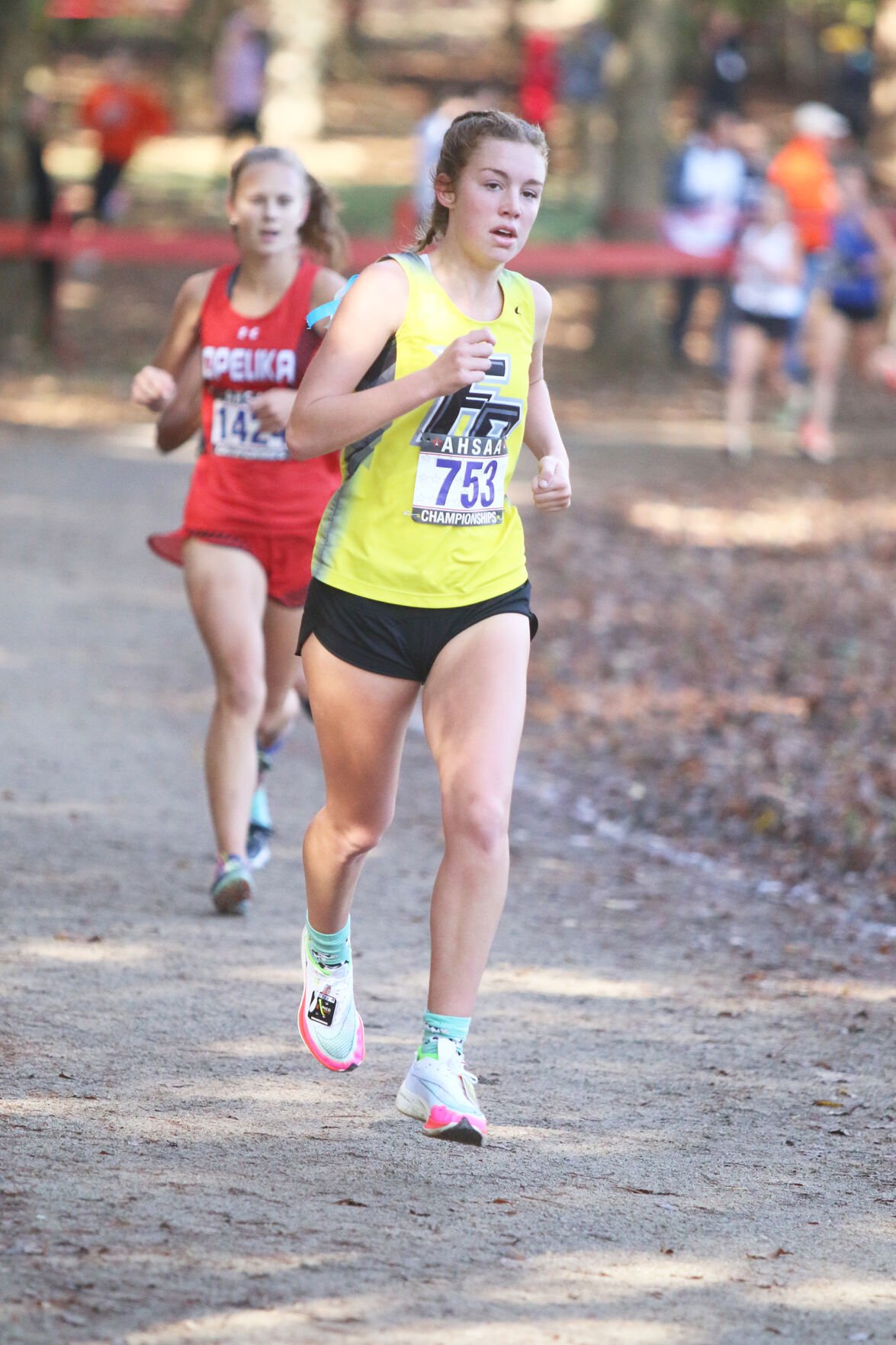 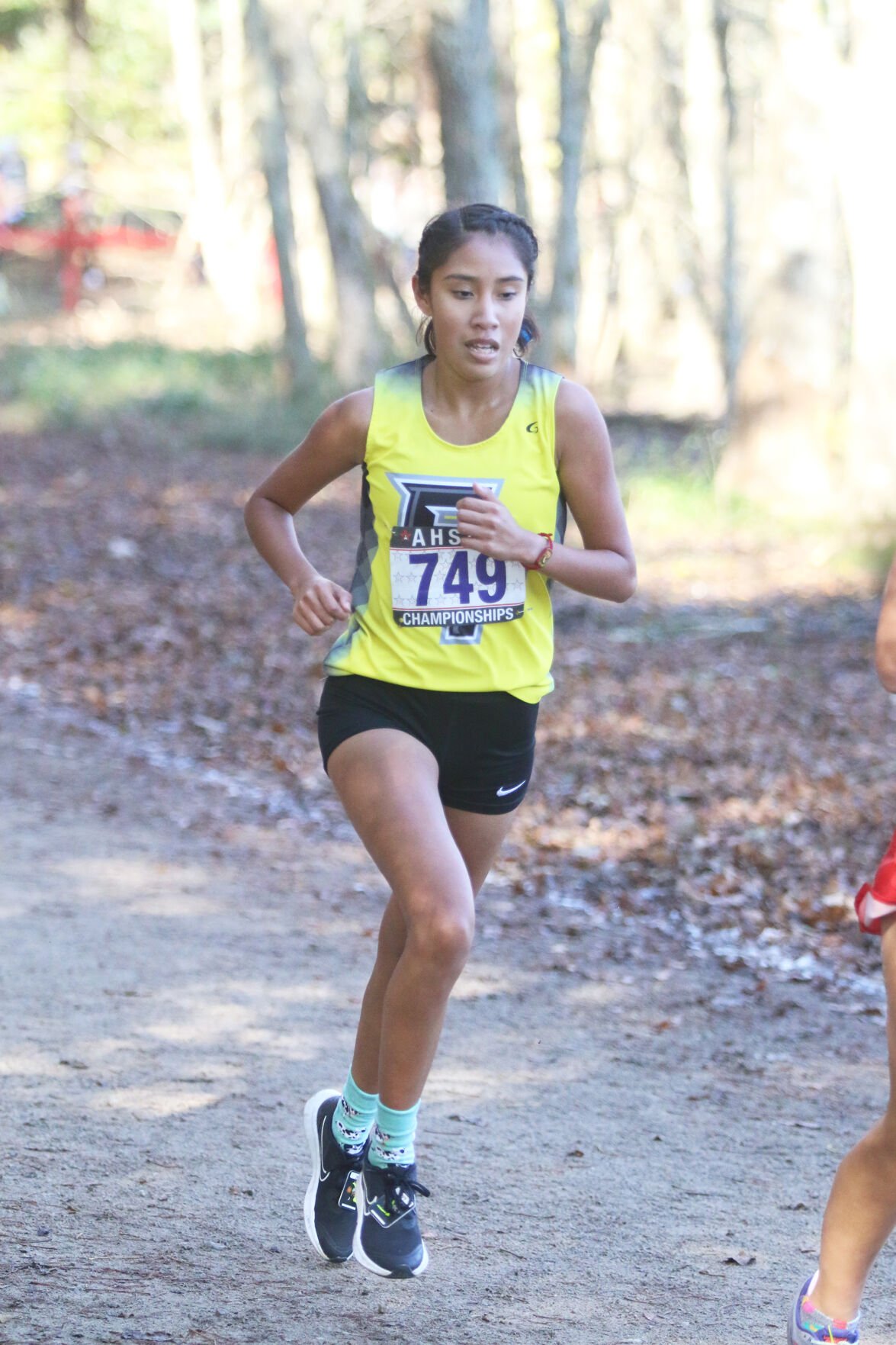 Jackson, a senior, ran a 19:05 in the state 5K as the Fort Payne girls’ top finisher, claiming her sixth consecutive all-state medal. She was also the team’s top finisher at last season’s state race, clocking in at 19:58 for 13th place.

Here’s how each state race played out Saturday:

Mountain Brook captured its first state championship since 2015 and its 24th overall, with a very strong score of 26 thanks to five runners finishing in the top 10. The 24 girls’ state cross country crowns is a new AHSAA state record – breaking a tie between Mountain Brook and Scottsboro, each owning 23 all-time titles.  The Wildcats finished third Saturday with 13 points and defending state 6A champion Homewood was runner-up with 104.

Lawrence County High School posted a very strong 31 points to dominate the Class 5A girls’ field en route to the state title. UMS-Wright was second with 96 points and St. John Paul II Catholic was third with 115.

The Red Devils of coach Stanley Johnson placed four runners in the top 10 finishers including junior Savannah Williams,who captured the individual girls’ 5A state meeting title with a winning time of 18:56.04. Teammate and eighth-grader Katie Mae Coan was second at 19:06.34. Katie Dumas,another eighth-grader, crossed seventh for Lawrence County at 19:50.89, and junior teammate Taylor Williams was eighth with a 19:54.11 time.

Montgomery Catholic’s Catherine Aaron was third in the 5A competition with a 19:06.34 time, and Addison Tiemann was fourth clocking 19:30.61.

Freshman Millicent Talmadge led Providence Christian to the Class 3A girls’ cross country state title with a 19:08.09 time to claim the 3A individual title. Providence, located in Dothan, totaled 39 points with runner-up and Dothan rival Houston Academy taking runner-up with 60 points. Whitesburg Christian finished third with 93 and Altamont was fourth at 110.

The Eagles of Casey Howell totaled 49 points to take the title. Bayshore Christian was second with 86, Hatton was third with 102 and University Charter School was fourth with 129.

Senior Will Pinson led the Panthers’ winning effort with a time of 15:13.61 to claim the 7A boys’ individual title. Mac Conwell of St. Paul’s, a junior, was second at 15:22.25 and Saints teammate Stone Smith,also a junior, was third at 15:44.37. Hewitt-Trussville senior Mitchell Phillips was fourth crossing the finish line with a 15:45.71 time.

Scottsboro’s Wildcats won their sixth boys state cross country championship in a row and a state-record 16th state title overall with 47 points in Saturday’s Class 6A race. The Wildcats of coach Luke Robinson won four 5A titles from 2016-19 and the 6A title last year. Mountain Brook finished second Saturday with 79 points. Chelsea was third with 114 and Cullman had 136.

The race for the boys’ Class 5A individual championship lived up to its promise as senior and 2019 state champion Joseph Perry of UMS-Wright nipped defending 5A state champion Woodrow Dean of Tallassee, also a senior, by just 33/100ths of a second in a  thrilling photo finish. Perry clocked 15:20.51 and Dean crossed the finish line at 15:20.84. UMS-Wright sophomore Charles Perry,the younger brother of Joseph,was third with a 15:56.21 time. Faith Academy senior Justin Walker was fourth at 16:23.72.

St. John Paul II Catholic of Huntsville totaled 54 points to win the Class 5A boys’ team title. UMS-Wright was second with 71, followed by Lawrence County with 106 and Ardmore with 139.

Bayside Academy of Daphne won the team championship with 73 points. American Christian was second with 82 and Ashville had 92 to take third place.

Providence Christian’s boys made it a clean sweep in Class 3A winning the state title with 50 points. Pleasant Valley was second with 95 and Trinity Presbyterian was third with 84. The Eagles’ girls also won the state championship.

Bayshore, located in Fairhope, captured the 1A/2A team championship with  61 points. Cold Springs was second with 86 and Hatton took third with 106.