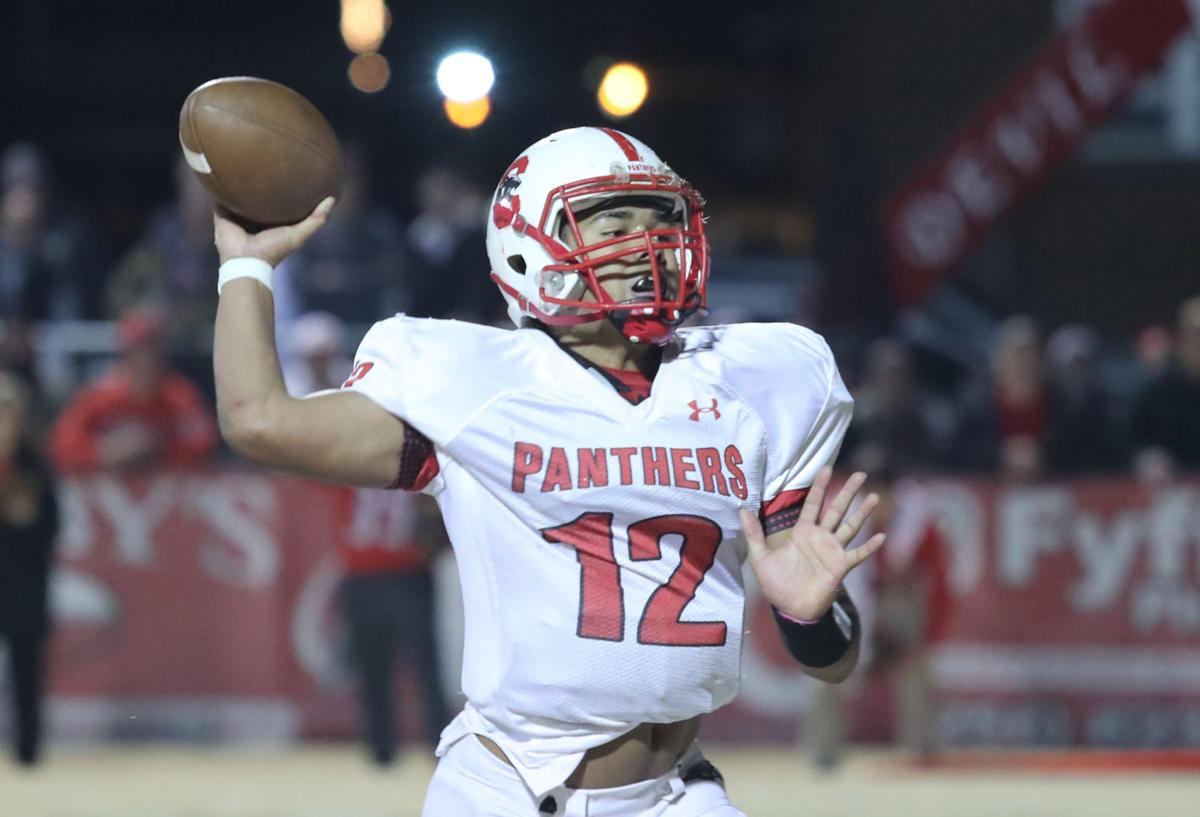 Collinsville senior Kaleb Jones attempts a pass against Fyffe during a Class 2A state semifinal-round game in Fyffe on Nov. 29, 2019. 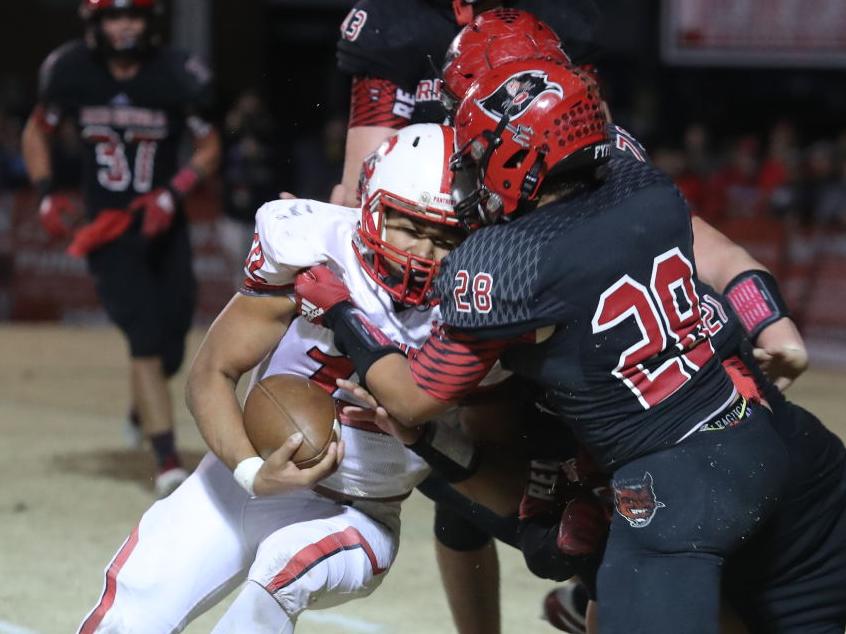 Collinsville senior Kaleb Jones (12) runs the ball against Fyffe's Ty Bell during a Class 2A state semifinal-round game in Fyffe on Nov. 29, 2019.

Collinsville senior Kaleb Jones attempts a pass against Fyffe during a Class 2A state semifinal-round game in Fyffe on Nov. 29, 2019.

Collinsville senior Kaleb Jones (12) runs the ball against Fyffe's Ty Bell during a Class 2A state semifinal-round game in Fyffe on Nov. 29, 2019.

FORT PAYNE — During the day, Kaleb Jones can be found working at Akins Furniture in Dogtown.

At night, he runs sprints, performs push-ups and other at-home bodyweight exercises.

Jones, who graduated from Collinsville High School last month, has been preparing himself for whenever Jacksonville State’s football team is cleared to practice.

“I do a lot of high-rep sets to try and build up muscle tissue, so I don’t pull muscles running and doing different things,” Jones said. “A lot of push-ups, a lot of cardio.”

Jones signed a national letter of intent to continue his football career at Jacksonville State on March 17. Jones was designated as an "athlete" by JSU coaches and awaits which position best fits him.

Jones said he’s stayed connected with JSU coaches amid the COVID-19 pandemic. The coaches have provided him at-home workouts until the university is cleared to bring him to the campus.

In his senior year, Jones helped guide Collinsville’s football program to its first state semifinal appearance. The Panthers finished with a 12-2 overall record and a 21-0 loss against eventual state champion Fyffe in the Class 2A state semifinal round Nov. 29, 2019.

Jones was named an all-state selection for three straight seasons, including a first-team nod for the last two years, as well as DeKalb County’s Player of the Year this season. He accounted for 3,109 yards of offense and 41 touchdowns as a Panther.

He also excelled at baseball and basketball at Collinsville.

In basketball, he was named an all-state performer as a junior, an all-area and all-county performer for three years and an area tournament MVP, helping lead the Panthers to the area championship game in each of his last two seasons.

In baseball, Jones was selected to an AHSAA North-South All-Star Game, with three all-area selections and three all-county selections, along with two state playoff appearances.

Jones’ final baseball season was cut short due to the COVID-19 pandemic. Collinsville had not yet played an area contest before the season was canceled.

“We played 10 or 11 games and we still had a chance to win our area,” Jones said. “Knowing that we couldn’t get a home playoff game after not having a chance to keep playing was heartbreaking.”

Football is the sport that brought Jones the most acclaim, but baseball was his first love.

“I played travel ball non-stop in the summer,” Jones said. “Getting to travel and play against people in different states, getting to play in the Little League World Series was fun.

“When I got older, I realized how tough football was and it made me respect football more. I ended up falling harder for football than baseball just because of how difficult it was.”

Jones said it was the challenge football created that made him love it, made him love playing quarterback and accepting the spotlight.

With Collinsville not having a youth football team at the time, Jones started playing on Crossville’s team of 7- and-8-year-olds. He played at Crossville through age 10 before joining Geraldine’s team for his last year of pee-wee football.

Through the years, Jones came to embrace the summer grind of football practices.

“You just keep pushing, ready to get back under the lights,” he said. “That’s what gets me going, getting back on the field and everybody watching.”

Before becoming proficient as a quarterback, Jones bounced around at different positions. His body’s natural transformation allowed him to experiment with playing in a multitude of spots on the field.

“I was a bigger boy when I was younger, so I played running back and linebacker all through pee-wee,” he said. “In sixth grade, all of a sudden I shot up and got really skinny really fast. That was the first year I ever played quarterback.”

As a seventh-grader, Jones played quarterback and linebacker for Collinsville’s junior varsity team, while also dressing out for the varsity team.

Jones caught more playing time as an eighth-grader. He was used as a running back, a slot receiver and a defensive end.

After hitting a growth spurt as a junior high player, Jones grew more during his freshman year, when he played more at receiver and was running option plays behind center.

He was marked strictly as a QB on offense to begin his sophomore season, while serving as a strong safety, defensively.

Being behind center literally and figuratively brought more pressure on Jones.

But it was pressure he used as fuel.

“I like knowing that everything is on you,” Jones said of playing QB. “The team looks to you for guidance. You have to know what everybody is going to do and when they’re going to do it.

“Everything is on you and you can either make it or break it.”

During Jones’ final run with Collinsville’s football team, the Panthers were rarely threatened by opponents. The majority of their games employed the mercy-rule method of a running clock throughout the second half.

The Panthers scored 40 or more points in eight games and limited opponents to one score or fewer in seven games.

“During the last football season, no one expected us to be in the state semifinals,” Jones said. “You’re grinding all summer to hopefully get to the championship at the end of the season. No one sees the work you put in during the summer, all they see is what happens between the lines.”

Jones is a longtime member at Collinsville Baptist Church and is open about his Christian faith. He said there was one moment above all others during his athletic career where he felt his faith tested and answered.

Jones suffered a high-ankle sprain during Collinsville’s second-round state playoff game against Ohatchee on Nov. 15, 2019. Through the intense pain, Jones said he knew his return to play was likely in jeopardy.

“As I stood up and started walking, I looked up and said, ‘Is this it?’” Jones said. “There was no doubt in my mind that (God) gently told me, ‘No.’ ...I don’t know how many people would believe me saying that, but that’s what happened.”

With his ankle wrapped, Jones returned to the field and scored the Panthers’ go-ahead touchdown. Collinsville won 21-14 and advanced to the quarterfinal round.

As Jones makes his way to JSU to begin his first semester as a collegiate student-athlete, he’ll major in general engineering. He said his love for math and the strength of the university’s engineering program helped his decision.