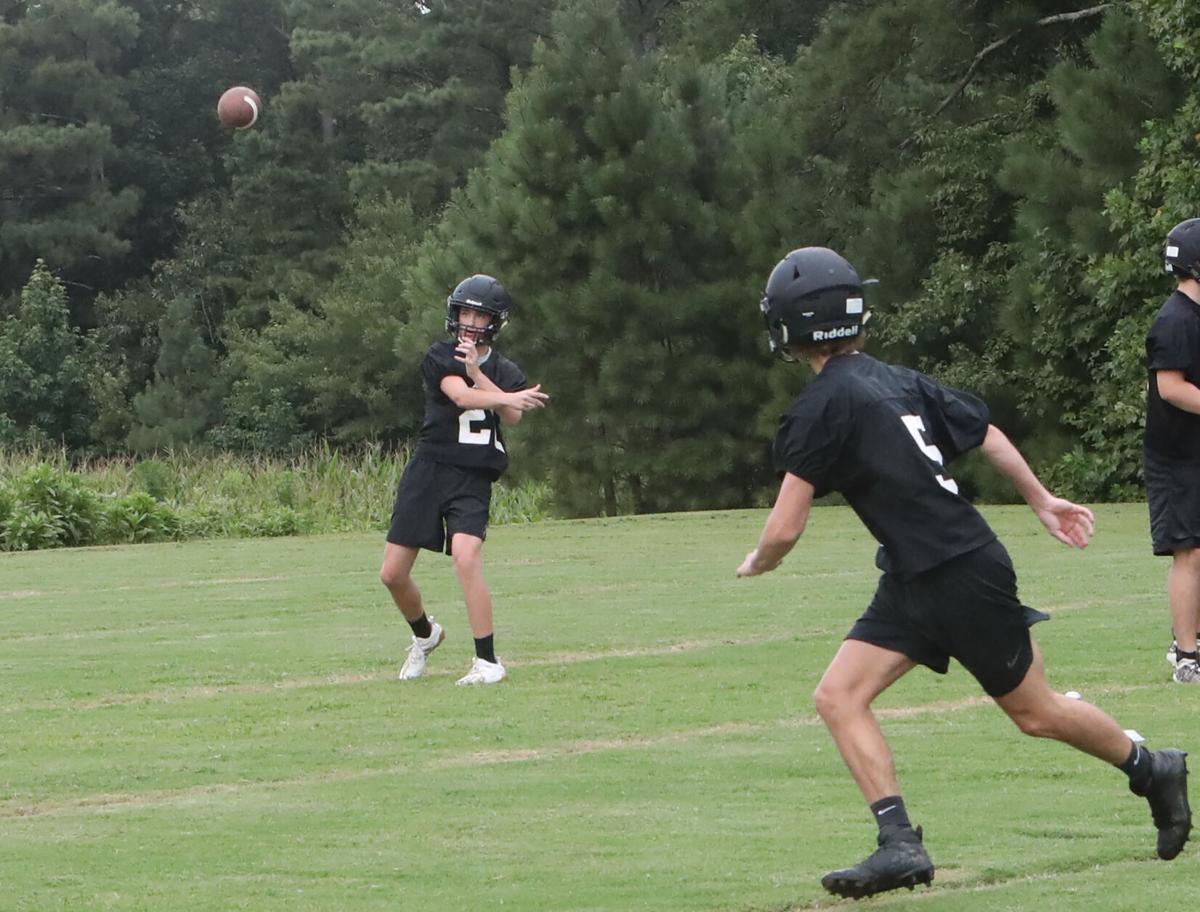 Ider’s Hunter Robinson, left, throws a pass as teammate Ben Watkins runs a route during a practice at the team’s fall camp at Ider High School on Tuesday evening. 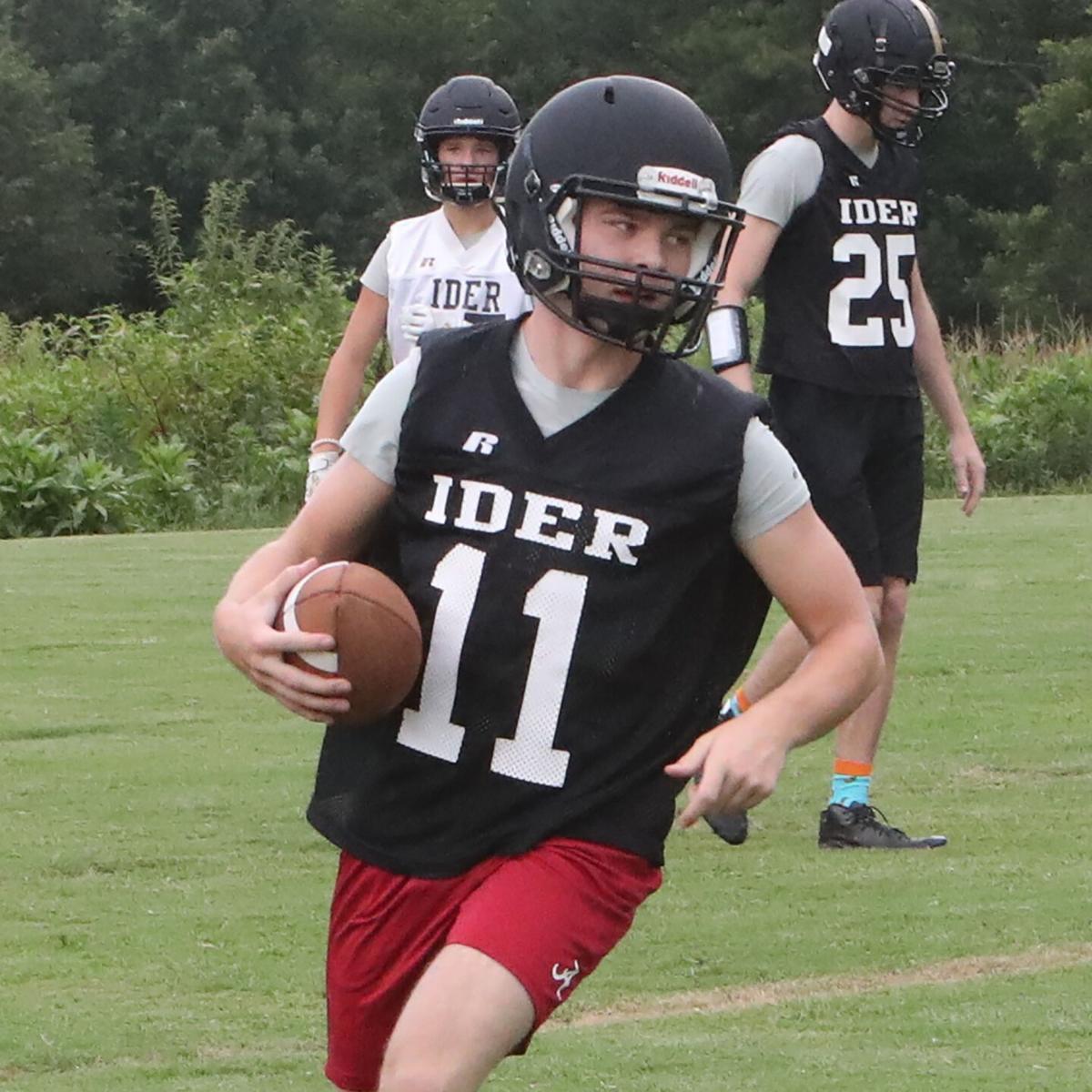 Ider’s Carson Lipham runs after making a catch during a practice at the team’s fall camp at Ider High School on Tuesday evening.

Ider’s Hunter Robinson, left, throws a pass as teammate Ben Watkins runs a route during a practice at the team’s fall camp at Ider High School on Tuesday evening.

Ider’s Carson Lipham runs after making a catch during a practice at the team’s fall camp at Ider High School on Tuesday evening.

The shortened offseason left the Hornets to use an abbreviated, run-heavy offense that limited big-play potential and slowed games to a crawl.

“It was just a tough situation,” Keith said. “We’d try to complete a pass here and there just to try and keep the chains moving.”

In Year 2, Keith and offensive coordinator Drew Rainer look to lift the offense to new heights, starting with a revamped offense nurturing a growing passing game.

This season, it’s all about dialing up big plays and putting skill position players in better positions to be successful. With key returners in place and a progressive offseason in tow, the Hornets are ready to expand the offense into a greater threat.

“We’re going to be a lot more mature this year,” Keith said. “The kids have done a good job of putting on the pounds they need while still staying in good shape.”

Keith said he believes Flannigan has the size, speed and strength to play at the collegiate level. The coach said Norman made the most of this spring’s quarantine period by sharpening his throwing ability, just as Massey, Hawkins and the other receivers used the provided home workouts to their advantage.

Ider hopes the offseason progression will equate to a much-improved offensive output.

The Hornets scored 140 total points last season and finished with a 2-8 record. They were held to one score or fewer in five games, including a pair of shutout losses.

“We were limited in our ability to be explosive,” Keith said. “We did a really good job of recruiting the hallways, got a couple of extra skill players who will help us.”

Keith said he’s looking for the Hornets to create some mismatches on the outside with Massey’s 6-foot-4, 200-pound frame and Hawkins’ speed and ability to play both receiver and running back.

“We want to be physical between the tackles with downhill running,” the coach said, “but we’re looking for that explosiveness through (run-pass option), trying to get the ball in Matt’s hands on the edge and still giving him an option to where he can dump it off.

“We really cater the offense to our skill players and we want to try to find opportunities to get the ball in the hands of our playmakers, let those guys get in space and let them do what great athletes do: make people miss and keep the ball moving.”

The O-line harbors the Hornets’ deepest collection of experience and skill with eight players in the rotation, a wealth the team didn’t have last season.

“Guys have come along and gained the necessary weight and strength from the workouts and running,” Keith said. “The O-line is where you need the most depth, anyway. We’ve had days of summer workouts where our offensive line players outnumber our skill guys, so it’s always a good sign to see a bunch of big guys out there.”

The realignment will help cut Ider’s travel this season and its schedule provides two opponents the program has never faced in Falkville and Whitesburg Christian.

The Hornets have played Tanner just four times in program history. The series is split 2-2 with Tanner winning the last meeting 52-7 in a first-round state playoff game Nov. 7, 2014, according to the Alabama High School Football Historical Society. Ider visits Tanner on Friday, Sept. 11.

Keith said Whitesburg Christian will play in Gurley this season, keeping Ider from traveling into Huntsville for the game, which will be Friday, Oct. 23.

“I think we match up well with some teams in our region,” Keith said. “The region is a little bit better in a lot of ways: It’s still competitive, we still get to play local teams and then we get to go on the road and play some teams we’ve never played before.”

Ider opens its season at Woodville on Friday, Aug. 21.

“I’m glad we’re getting to play, as of now,” Keith said. “Who knows what tomorrow brings? I told our kids to enjoy it because it could all go away tomorrow. We’re always one phone call away from not getting to play anymore.”

A few clouds. A stray shower or thunderstorm is possible. Low near 70F. Winds light and variable.