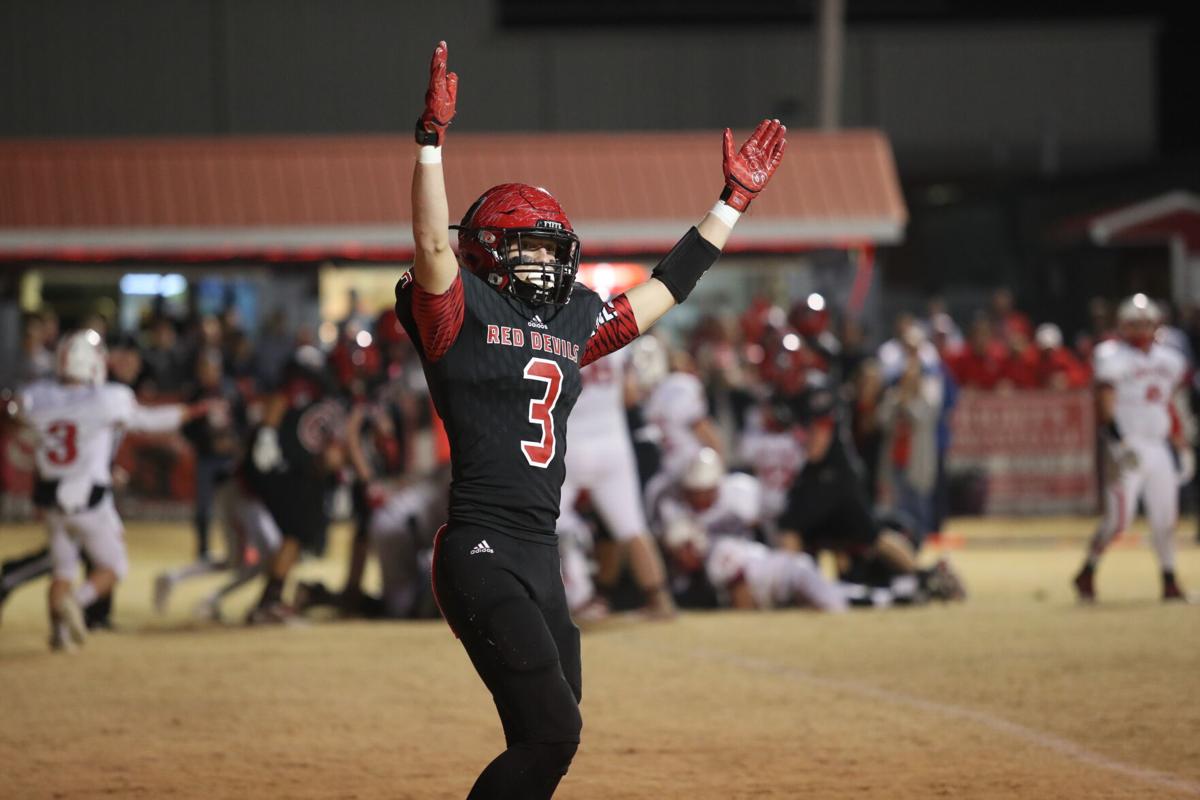 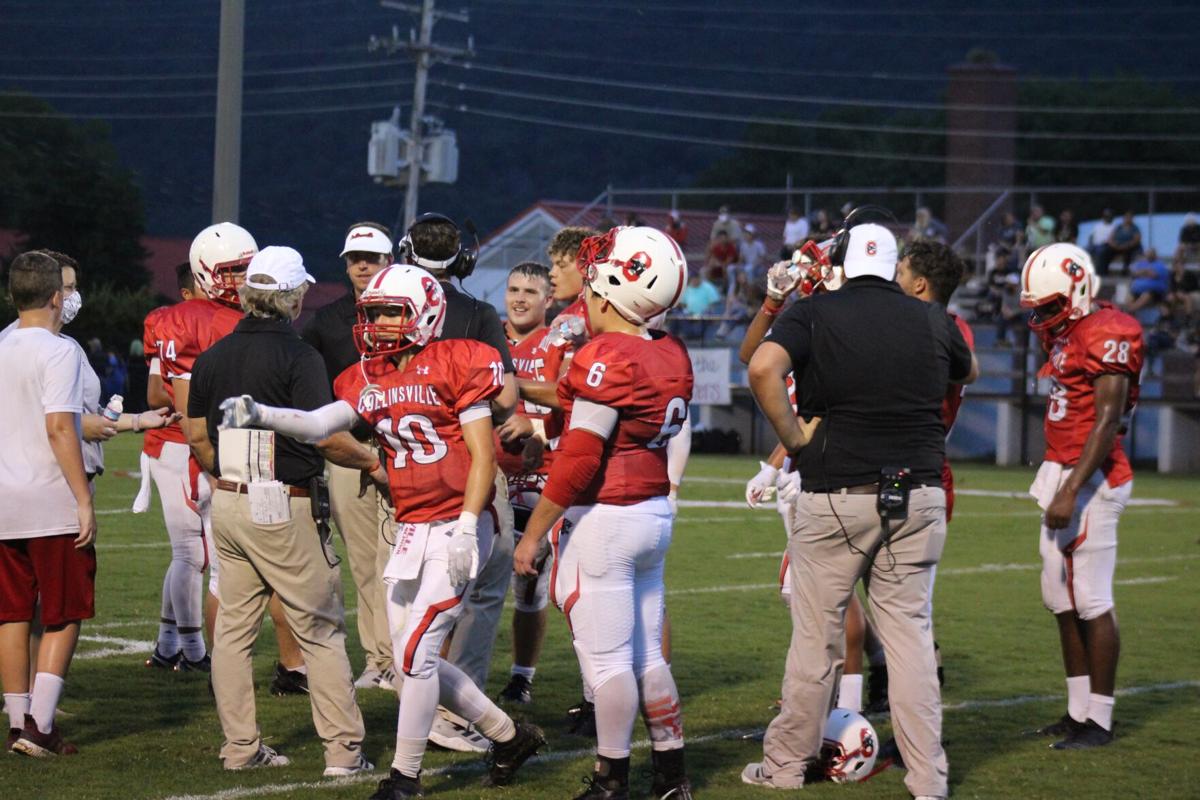 The Collinsville football team is pictured during a timeout against Crossville last Friday night. 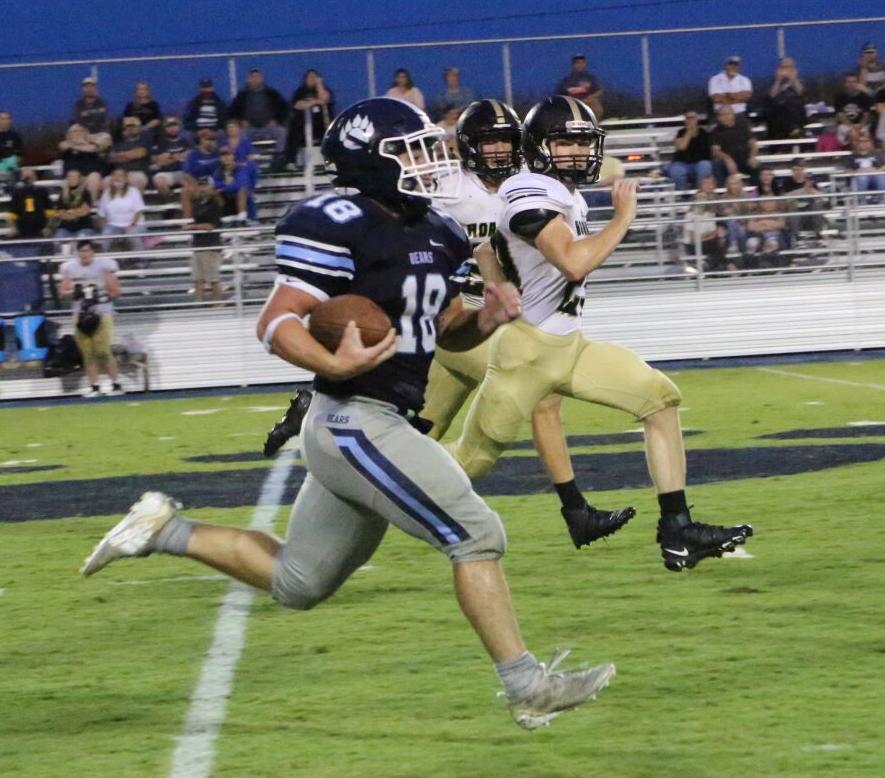 Plainview running back Marcos Vega (18) carries the ball in space during a game against Ider in Rainsville last Friday night.

The Collinsville football team is pictured during a timeout against Crossville last Friday night.

Plainview running back Marcos Vega (18) carries the ball in space during a game against Ider in Rainsville last Friday night.

Fyffe and Collinsville will meet for the first time as Class 3A teams this week.

The Panthers host the Red Devils at Chad Hawkins Stadium at 7 p.m. Friday for a Region 7 opener for both sides.

The last meeting between Collinsville (2-0) and Fyffe (1-0) was in a 2A state semifinal game in Fyffe. The Red Devils won 21-0 and advanced to the state title game where they defended their championship for a second straight time.

Fyffe is coming off a bye week, having defeated Isabella 48-0 in its season opener Aug. 21. The team finished with 350 yards of total offense, including 289 yards rushing.

Ike Rowell ran for 114 yards and two touchdowns in the win. He also threw for 71 yards and had a TD pass to Brody Dalton.

Dalton made all six PAT kick attempts for the Red Devils.

The Panthers are undefeated through their first two games under the guidance of first-year coach Daniel Garrett. They defeated Section 7-0 in their season opener and topped Crossville 24-6 in their home opener last week.

Keaton DeBoard finished the game with eight carries for 52 yards and two touchdowns and Orr had nine carries for 37 yards with a touchdown.

According to the Alabama High School Football Historical Society, Fyffe holds a 41-17-1 all-time record in the series with Collinsville.

Here’s a look at this week’s other games featuring DeKalb County teams:

Matthew Norman threw for 88 yards with no interceptions and Hunter Robinson ran for 71 yards as Ider finished with 200 yards of offense to Plainview’s 463 yards.

Ider’s defense produced a second-half shutout in its 23-8 season-opening win against Woodville. Norman ran for 230 yards and three touchdowns in the win, and Luke Hannah, Cohen Willoughby, Ben Smith and Carson Lipham each recovered a Woodville fumble.

NSM is coming off a 9-4 season in which it reached the 2A quarterfinals.

NSM has six starters back on both sides of the ball and has won four straight against Ider and seven of the last nine, including a 48-0 shutout in last year’s meeting.

Pisgah (0-1) is in its third season under Plainview alumnus Luke Pruitt. The Eagles won the last two meetings after losing 24 straight to the Bears. They opened last week with a 25-3 loss at Sand Rock.

Plainview’s run game flourished in last week’s 40-0 shutout win against Ider. Marcos Vega led all Bears with 116 yards on eight carries and Brody McCurdy finished with 90 yards on eight attempts with three touchdowns. Noah White threw for a touchdown and rushed for 104 yards.

Garrett Smith led the Bears’ defensive outing with a team-high seven tackles, including four for losses with a sack.

The Bears finished the game with 463 yards of offense.

Sylvania goes for its 13th straight win against Brindlee Mountain in a region opener at 7 p.m. Friday.

Brindlee Mountain has had problems with having enough players to play games this season amid COVID-19 concerns and forfeited its opener against Holly Pond in AHSAA’s Week 0, according to Mike Tankersley of The Arab Tribune.

The Rams defeated Brindlee Mountain 51-0 last season, as the Lions finished the season with an 0-10 record.

The Rams finished with 365 yards of offense, including 269 yards on the ground.

Geraldine’s game at Asbury has been rescheduled to 7 p.m. Thursday, as requested by Asbury.

The Bulldogs (1-0) opened their regular season with stellar rushing performances in a 30-7 victory against Westminster Christian last week.

Bo Harper completed 4-of-11 passes for 41 yards. Troy Willoughby had two receptions for 28 yards, Hall one for 9 and Baldwin 1 for 4.

Geraldine’s defense intercepted four passes, two of them by Willoughby. He returned one of his 25 yards for a pick-six. Colvin and Harper each collected an interception.

The Rams failed to score in last week’s 28-0 loss to Whitesburg Christian. They began the 2020 campaign with a 38-33 loss at Gaston.

Section rallied with a late touchdown to beat Valley Head (1-1) last week. The Tigers took their first lead on a touchdown and extra point in the third quarter. But Section rallied late, getting the winning score on Jr. Walker’s 3-yard touchdown run with 1:11 remaining. Dominick Blair then sealed the win for Section by intercepting a pass on Valley Head’s ensuing possession.

Cedar Bluff holds a 39-15 all-time record in the series with Valley Head, winning the previous meeting 13-8 in October 2017.

The Crossville Lions continue searching for their first win as they visit the Boaz Pirates at 7 p.m. Friday.

The Lions (0-2) are coming off a 24-6 loss at Collinsville, in which they committed five first-half turnovers.

Crossville got a turnover of its own when Landon Cox intercepted a pass in the end zone with 57 seconds remaining in the opening half.

But the excitement was short-lived as Collinsville’s Jacob Jones intercepted a Crossville pass and returned it for a touchdown. The extra point failed and Collinsville took an 18-0 lead into halftime.

In the second half, Crossville did its best to try and overcome those first-half turnovers. The Lions opened the third quarter with a 13-play drive that took them inside the Collinsville 10-yard line, but after a holding penalty the Lions turned the ball over on downs with 5:06 remaining in the third quarter.

Crossville again had another long drive and this time it resulted with a 4-yard touchdown run from Hunter Haston on the first play of the fourth quarter. The extra-point attempt failed and Collinsville held onto a 18-6 lead.

Haston finished the game with 12 carries for 31 yards with a touchdown for Crossville while also going 3-for-7 passing for 36 yards. Colton Adkins added 10 carries for 62 yards for the Lions and Trace Allen had two catches for 28 yards.

Boaz is reeling from a 28-21 overtime loss against Madison County after opening the season with a 41-34 win at Hayden.

Coming off its bye week, Cornerstone Christian Academy opens its regular season against Jacksonville, beginning at Rodeo Field in Rainsville at 7 p.m. Friday.

The Eagles host Jacksonville for their first regular-season contest after defeating East Central 35-0 in a weather-shortened scrimmage Aug. 21. It was the head-coaching debut for CCA coach Jeff Nelson.

CCA’s Jack McGullion ran for two touchdowns on three carries and Israel Phillips rushed for a team-high 89 yards on four attempts with a touchdown as the game was called with 7:11 left in the opening half at Rodeo Field.

Phillip Grizzard made all five extra-point kick attempts for CCA.

The Eagles raced to a 28-0 lead heading into the second quarter and finished with 176 yards rushing.

Mostly cloudy this morning with thunderstorms developing this afternoon. Storms may contain strong gusty winds. High around 80F. Winds SW at 10 to 20 mph. Chance of rain 90%.