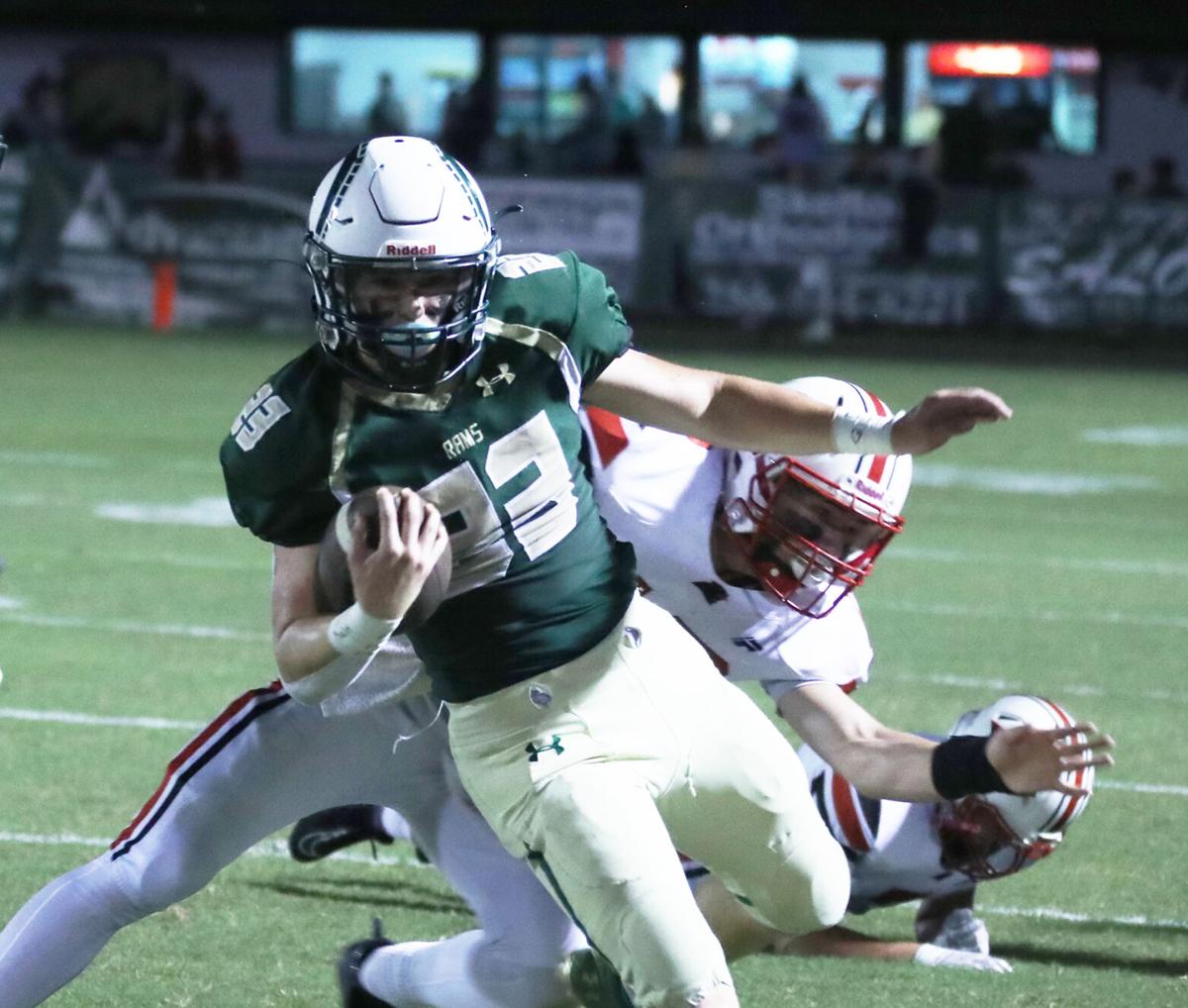 Sylvania's Preston Bates avoids a Collinsville defender along the sideline. 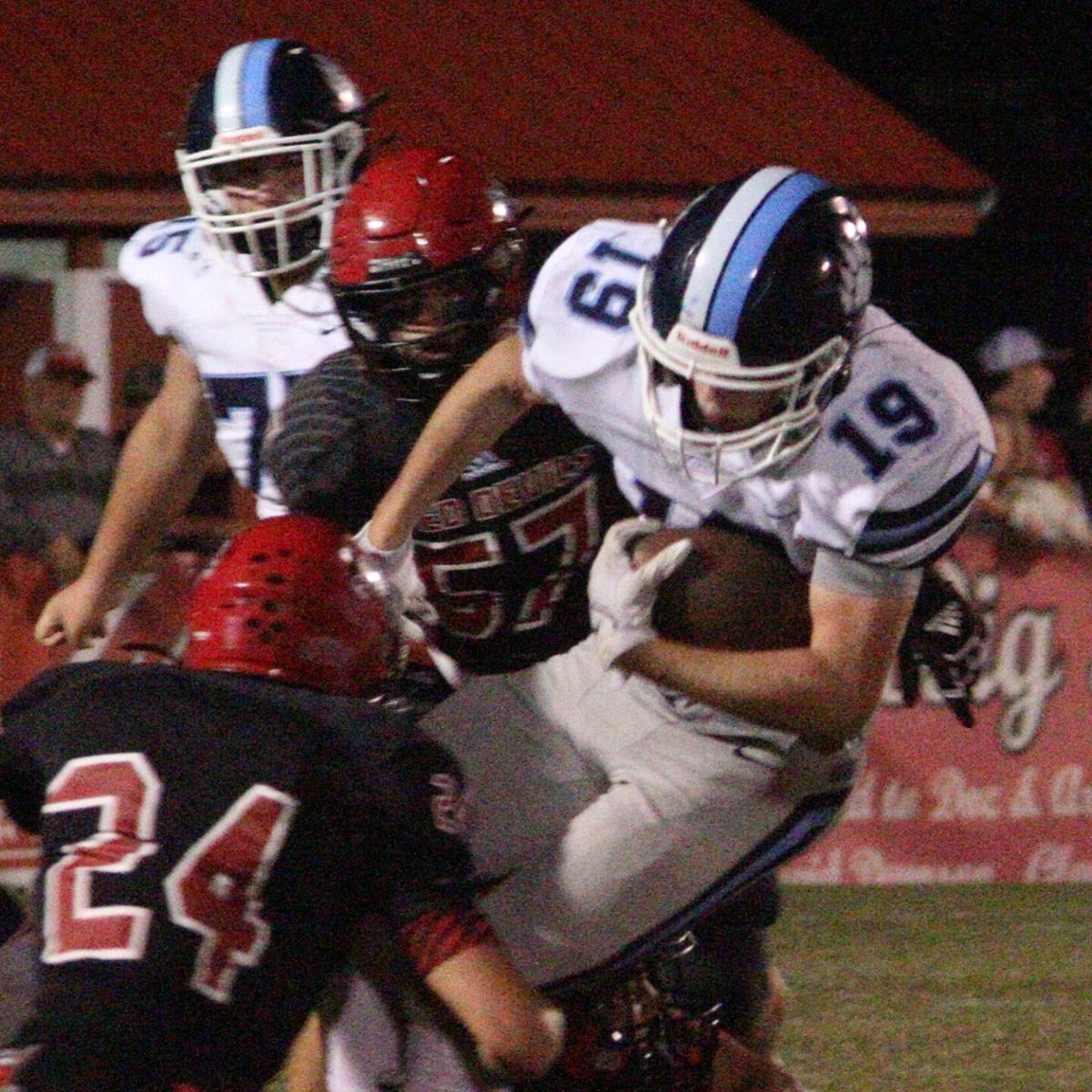 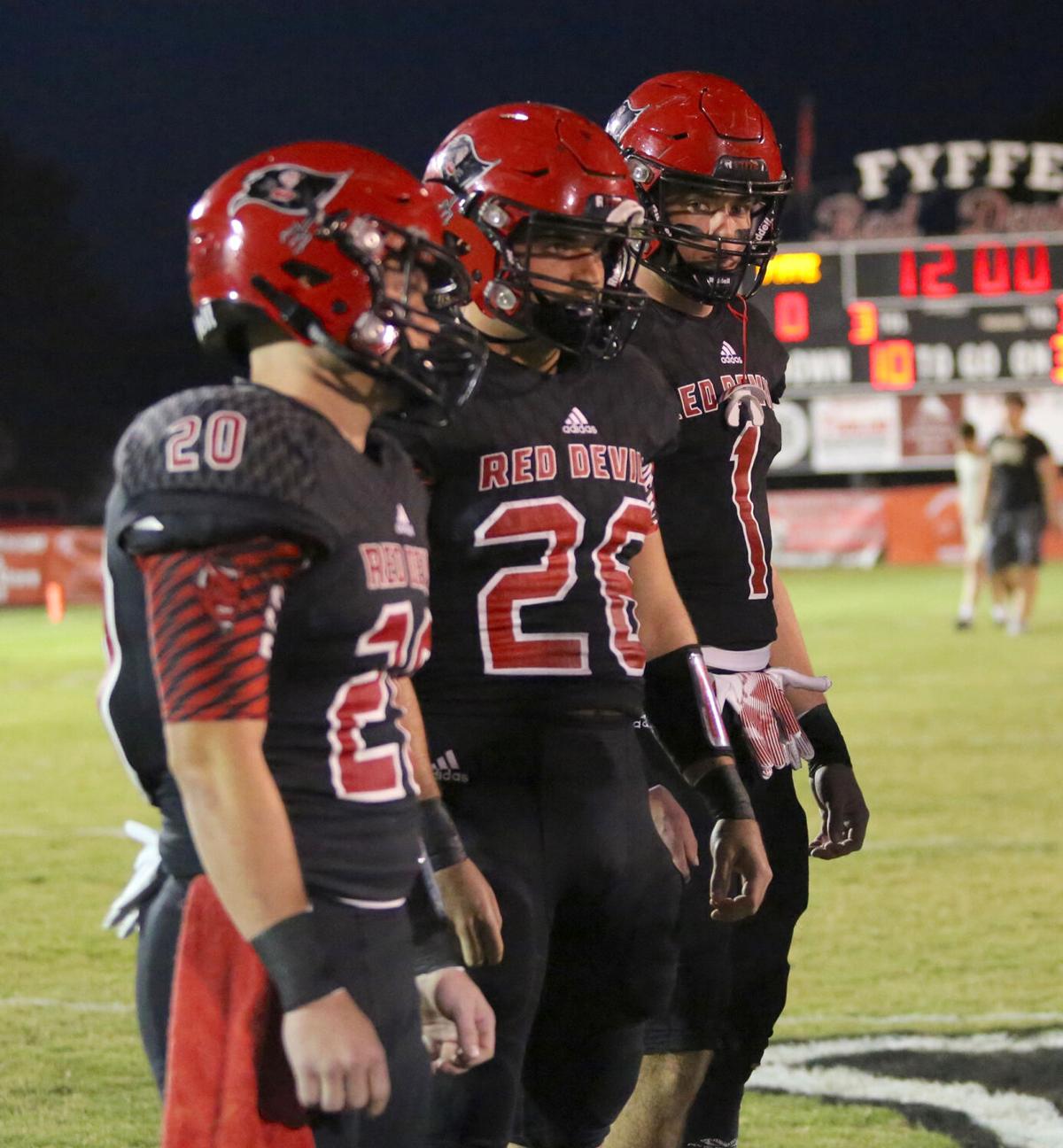 Pictured from left, are Fyffe’s Will Stephens, Kyle Dukes and Austin Mulligan prior to kickoff against Plainview at Paul Benefield Stadium last Friday night. 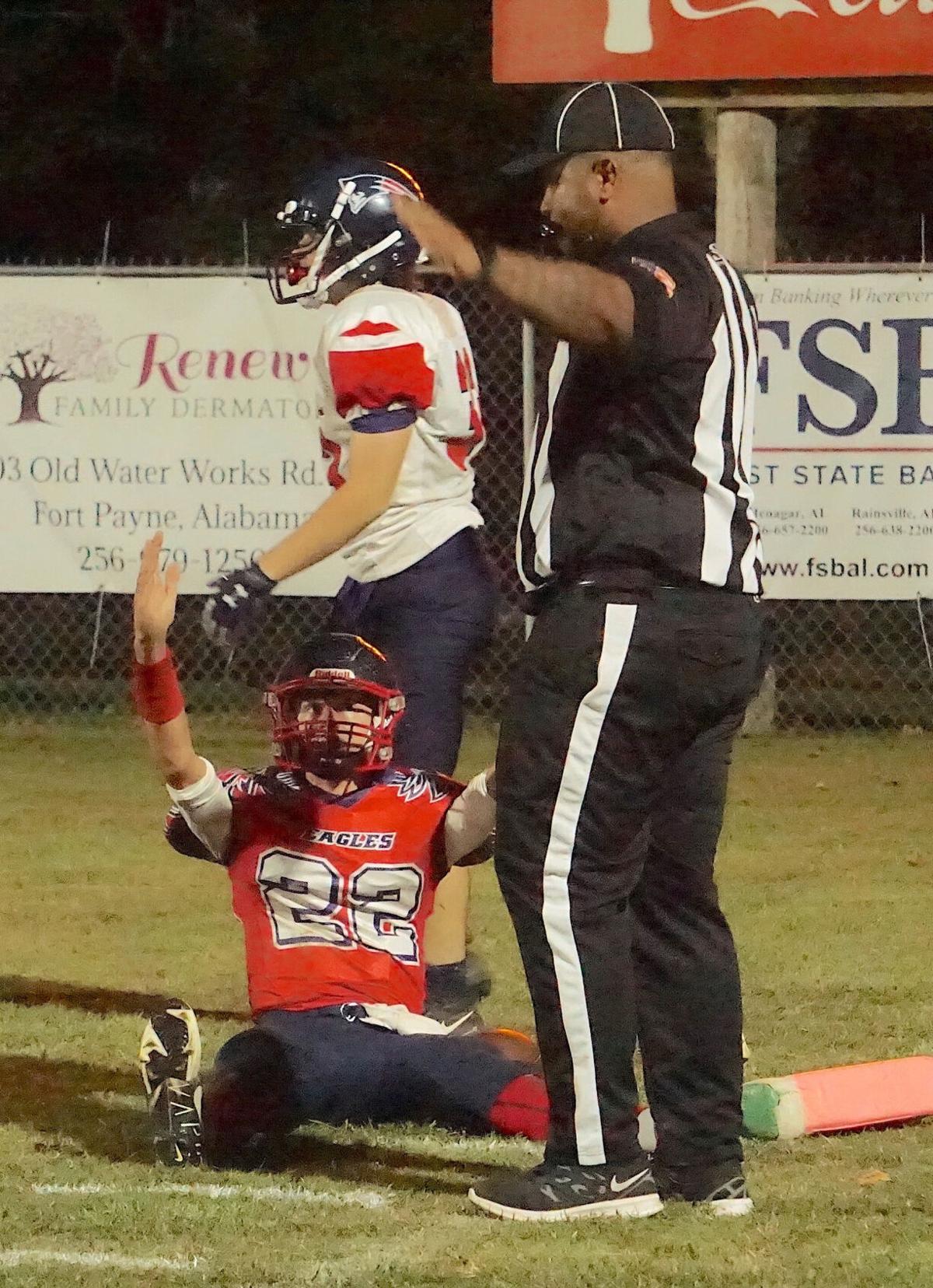 Sylvania's Preston Bates avoids a Collinsville defender along the sideline.

Pictured from left, are Fyffe’s Will Stephens, Kyle Dukes and Austin Mulligan prior to kickoff against Plainview at Paul Benefield Stadium last Friday night.

Region competition thickens this week, as Class 3A, Region 7 rivals Sylvania and Geraldine clash at Coolidge-Isbell Field at 7 p.m. Friday.

The Rams visit Geraldine on the heels of a 49-6 homecoming victory against Asbury, improving to 4-2 overall while bumping their region record to 3-1.

Geraldine leads the all-time series with Sylvania 31-29-3 entering Friday’s contest, having won the past three meetings. The Bulldogs were victorious 17-10 last year, all according to the Alabama High School Football Historical Society’s website.

Collinsville returns from a bye week and visits region foe Plainview in Rainsville at 7 p.m. Friday.

Plainview took a 45-19 loss to Fyffe last week after falling behind 19-6 at halftime.

The Bears gained 194 yards of offense while surrendering 353 yards.

Levi Brown rushed for 55 yards on six carries with a touchdown and Noah White scored a rushing touchdown behind 17 yards on six attempts. Additionally, White threw a 57-yard scoring pass to Josh Sandlin.

In their last game Sept. 24, the Panthers fell 28-7 to non-region rival Sand Rock.

Collinsville’s lone score came as a result of a Keaton DeBoard 8-yard scoring pass to Colton Wills during the second quarter. Tristan Gallegos added an extra-point kick to bring the Panthers within 14-7 with 1:05 remaining in the opening half.

Sand Rock finished with more than 400 yards of offense, led by Aaron Ashley, who passed for 263 yards and two touchdowns. Trace Haygood ran for 101 yards and two scores, and Logan Coker had 118 yards receiving and a touchdown.

Logan Anderson rushed for 66 yards on 11 carries with a touchdown, Brodie Hicks added 11 carries for 64 yards and two scores and Aubrey Baker chipped in a rushing score behind 25 yards rushing on five attempts.

In their all-time matchups against the Bison, the Red Devils are 21-3, having won the last 14 contests spanning two decades. The last time Fyffe lost to NSM was September 1998, all according to the Alabama High School Football Historical Society’s website.

The Ider Hornets aim for their fourth win in a row as they travel to the 2A, Region 7 rival Pisgah Eagles at Sam Kenimer Stadium at 7 p.m. Friday.

In the all-time series against Pisgah, the Eagles maintain a 28-16-1 lead entering Friday, according to the Alabama High School Football Historical Society’s website. Last year, Pisgah won 34-27 in overtime.

Plainview is the only other common opponent between Ider and Pisgah. The Hornets lost to the Bears 28-14 on Aug. 27 and Pisgah took a 54-40 loss at Plainview Sept. 3.

After dropping to 0-3, the Eagles earned a 56-14 win against Whitesburg Christian on Sept. 17, before defeating Kate Duncan Smith DAR 58-28 the following week.

Valley Head returns home to play Coosa Christian in a 1A, Region 7 contest at 7 p.m. Friday.

Ashton Brown added to Valley Head’s run game success with 18 carries for 141 yards and a touchdown, as the Tigers improved to 3-4 overall and 3-1 in region play.

Of Valley Head’s 603 yards of offense, 588 yards came from its ground game.

The Tigers held Appalachian to 323 yards of offense and led 28-0 early in the second quarter, before Appalachian got on the scoreboard midway through the period.

The Tigers enter Friday’s game with a 6-3 record against the Conquerors, winning the previous two meetings.

Victory Christian, from Columbus, Miss., travels to Rainsville after taking a 56-20 loss against Tuscaloosa Christian last week, dropping to 1-3 overall.

Victory Christian’s one win was a 32-26 triumph against New Life Christian Academy — Cornerstone beat New Life 40-0 in its season opener.

Blake Dobbins accounted for seven touchdowns as Cornerstone raced to a 30-0 halftime advantage.

Dobbins completed 11 of 15 passes for 302 yards with four touchdowns and no interceptions. He rushed 15 times for 81 yards with three scores and an interception and five solo tackles as a defender.

The Crossville Lions host the Fairview Aggies in a 5A, Region 7 game at Crossville Memorial Stadium at 7 p.m. Friday.

The Aggies improved to 5-1 overall and 3-1 in region competition after holding on to beat Boaz 21-18 last week. The victory extended Fairview’s win streak to three games.

While the Aggies have averaged 39 points per game this season, Crossville has scored just 26 total through six contests — the Lions scored 20 in a 21-20 home loss against Collinsville earlier this season.

According to the Alabama High School Football Historical Society’s website, Fairview leads the all-time series against Crossville 5-1. The Aggies won 35-0 in last year’s meeting and were victorious in the previous four contests.