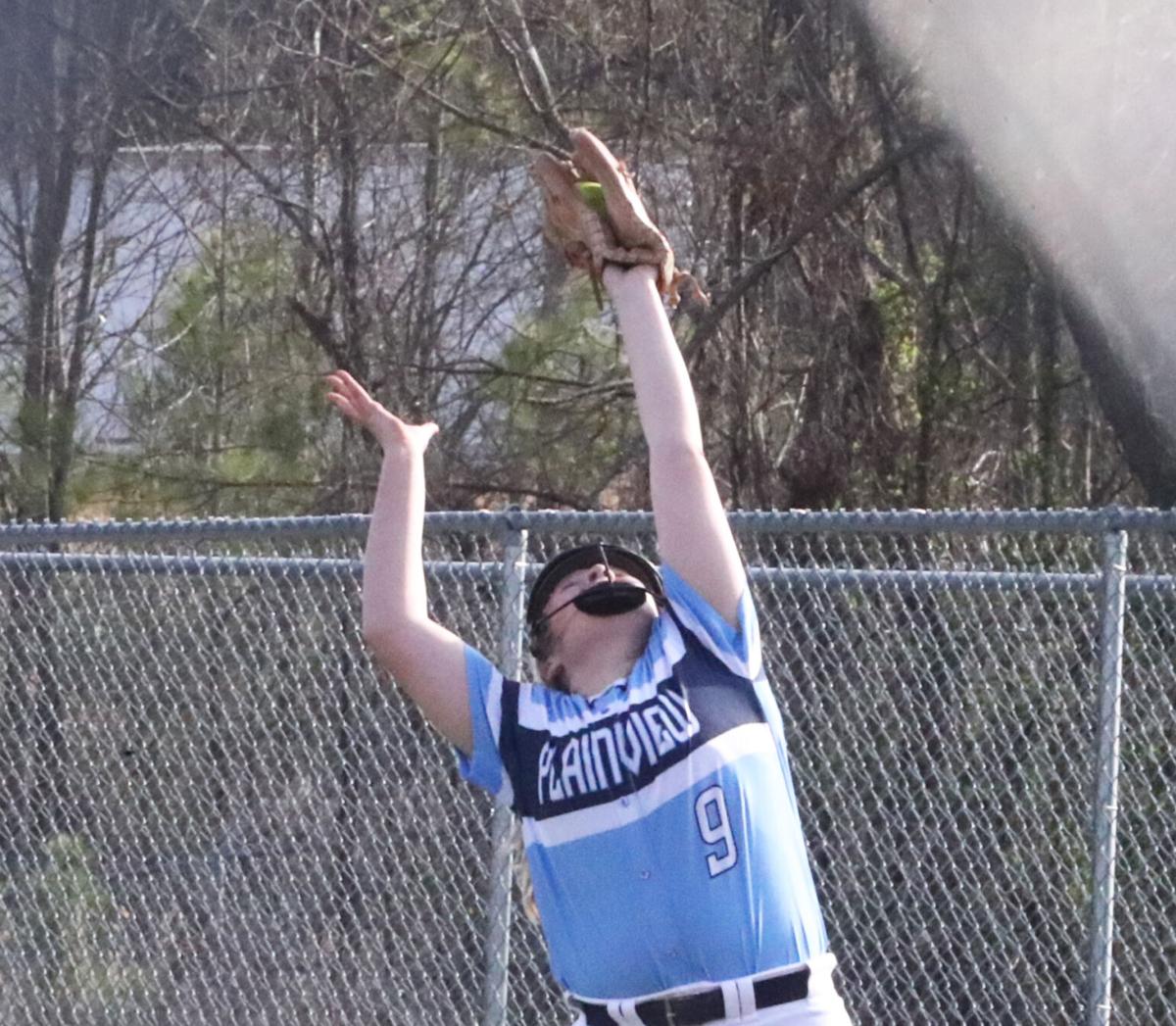 Plainview's Jada Hampton catches a fly ball during a game against Pisgah at Rainsville Field of Dreams in Rainsville on Monday afternoon. 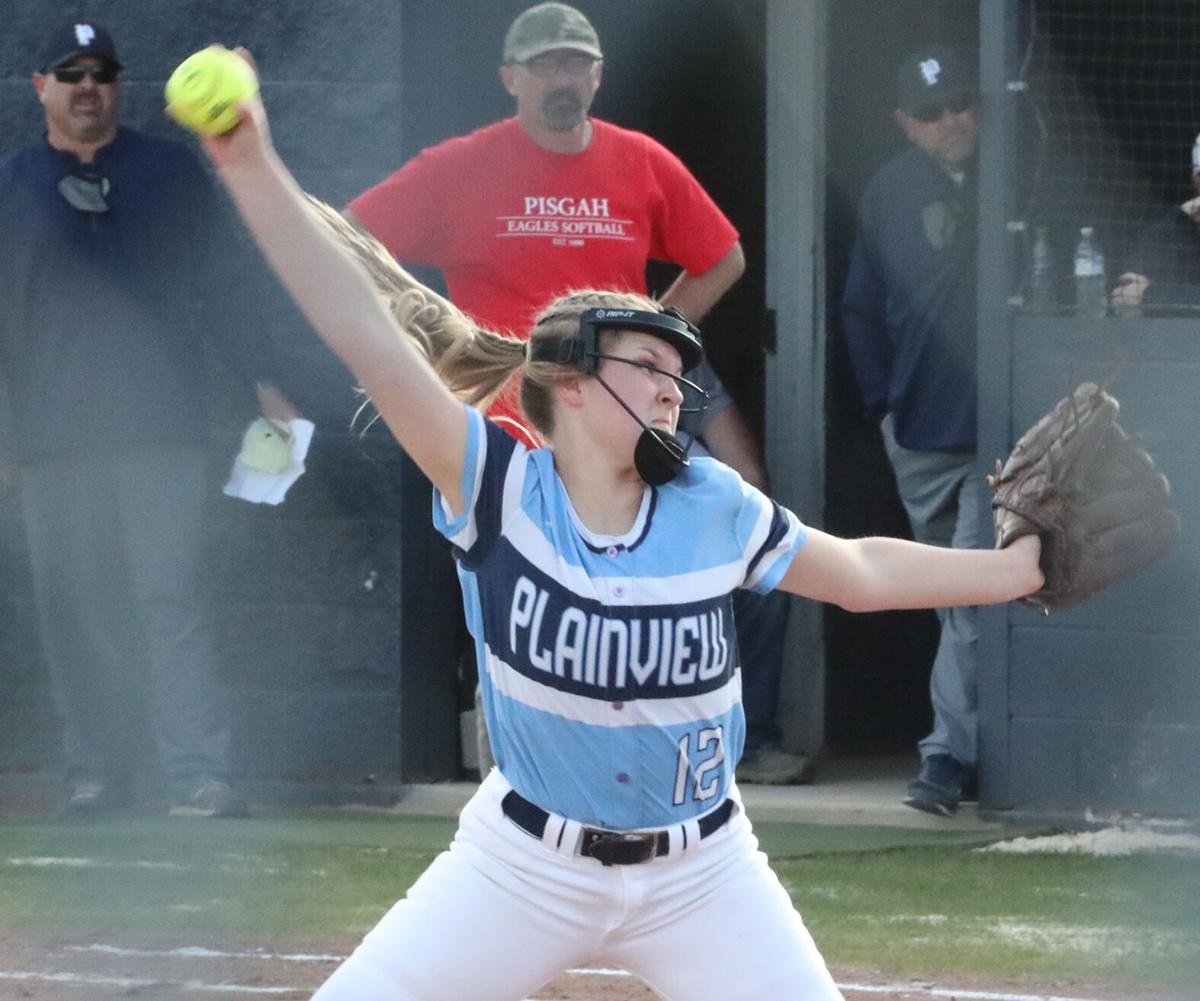 Plainview's Lily Boswell pitches against Pisgah at Rainsville Field of Dreams in Rainsville on Monday afternoon.

Plainview's Jada Hampton catches a fly ball during a game against Pisgah at Rainsville Field of Dreams in Rainsville on Monday afternoon.

Plainview's Lily Boswell pitches against Pisgah at Rainsville Field of Dreams in Rainsville on Monday afternoon.

Jada Hampton singled to center field to bring in two runs, propelling Plainview past Pisgah for a 4-3 walk-off victory at Rainsville Field of Dreams on Monday afternoon.

With the Bears (13-2-1) trailing 3-2 in the bottom of the seventh inning and one out in play, Hampton popped a line drive to Pisgah center fielder Molly Heard, allowing Marisa Hiett to score from third to tie the game, before Halle Brown reached home to secure the winning run.

Lily Boswell hit a solo home run across center field in the bottom of the fifth inning, giving Plainview a 2-1 lead.

The Eagles overtook the lead in the sixth, plating the tying run on an error and adding another on a Hannah Duncan single.

Boswell delivered 14 strikeouts and walked one in a complete-game pitching effort for the Bears. She surrendered six hits.

Hannah Regula smacked a two-run home run over the center field fence in the fourth inning and Plainview pushed across five runs in the fifth to defeat Sand Rock 12-2 in the Cherokee County Invitational championship game in Centre on Saturday night.

The Bears led 5-2 before Regula’s homer also plated Tidmore for a 7-2 advantage.

In the fifth inning, Tidmore scored on a fielder’s choice before Puckett doubled home Regula and Livia Smith for a 10-2 lead. With two outs in play, Puckett scored on a passed ball before Kadie Brooks reached home plate on a Hampton single to end the game by run rule.

Plainview’s Boswell delivered a 12-strikeout performance while walking none and allowing two hits and runs in a complete-game effort in the circle.

Plainview topped Spring Garden 4-1 in the semifinal round.

Boswell hit a solo homer across center field to lift the Bears to a 1-0 advantage in the second inning.

The score remained locked at 1-0 until the bottom of the sixth inning, when Plainview plated three runs. Brooks scored on a fielder’s choice, Brown stole home after Hiett doubled and Ali Price reached home on a sacrifice fly to make it 4-0 before the end of the frame.

The Bears left 16 runners stranded on base to Spring Garden’s three.

In the circle, Word struck out 15 batters and walked one while surrendering one run on five hits in a complete-game pitching performance.

Boswell pitched a complete-game shutout in Plainview’s 9-0 victory against Falkville in the team’s second game of the day Saturday.

Boswell retired six and walked one for the Bears.

Abby Williams finished with a triple and Brown, Puckett and Word each recorded a double at the plate for Plainview.

The Bears made quick work of Cedar Bluff in a 14-0 victory in three innings of their opening game Saturday.

Puckett, Regula and Word each had a home run, Boswell contributed two doubles and Brooks added another double, as Plainview collected 12 hits and RBIs in the win.

Word sat seven batters and walked none while giving up one hit in the circle.

On Friday, Word struck out seven and walked two while allowing two hits and one run in a complete-game pitching performance, leading to an 8-1 Plainview win against tournament host Cherokee County.

Boswell and Williams hit a home run apiece and Brown finished with a double at the plate for the Bears.

Puckett, Regula and Word each finished with a home run and Brown contributed two doubles, as the Bears amassed 18 hits and 14 RBIs.