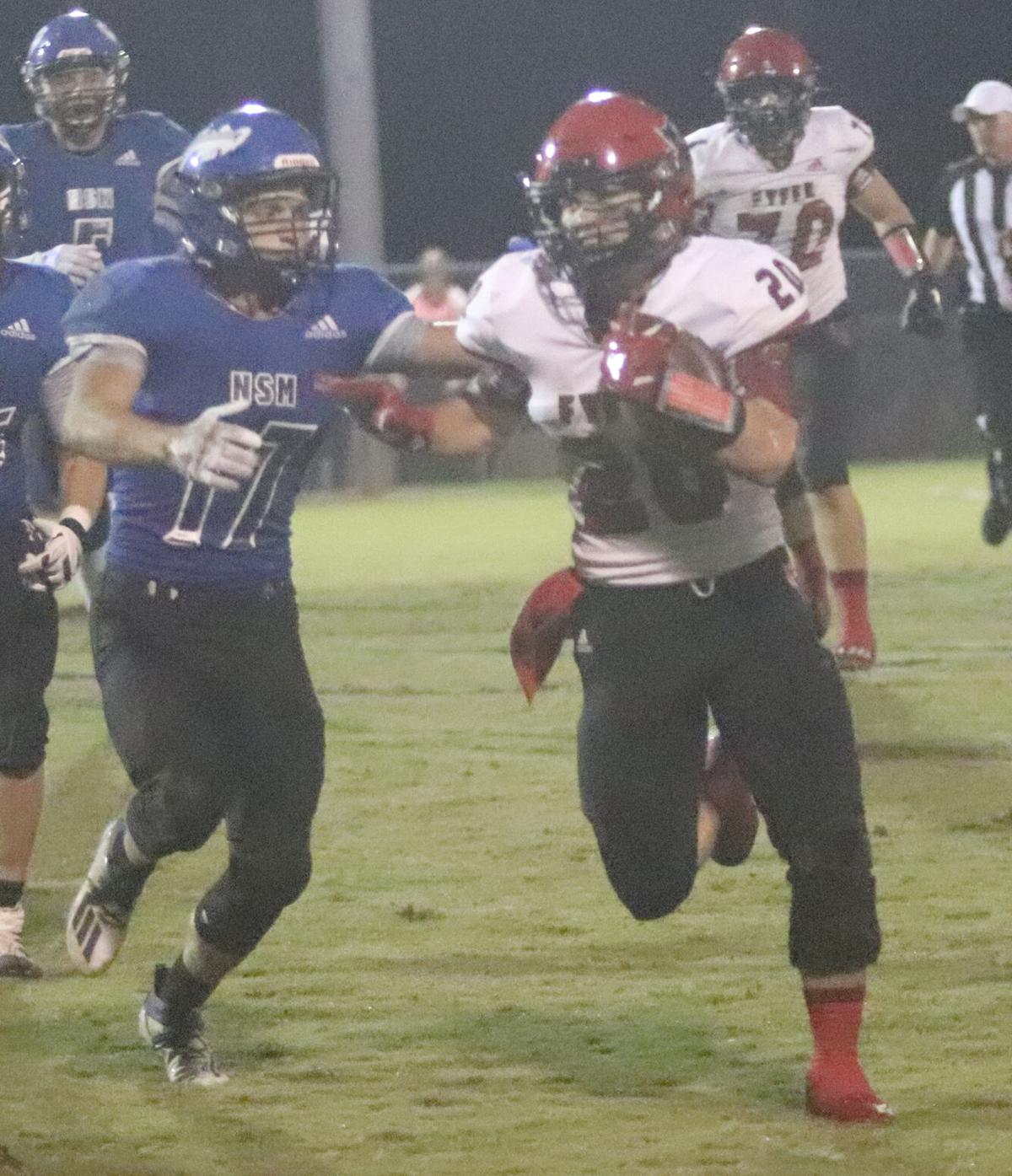 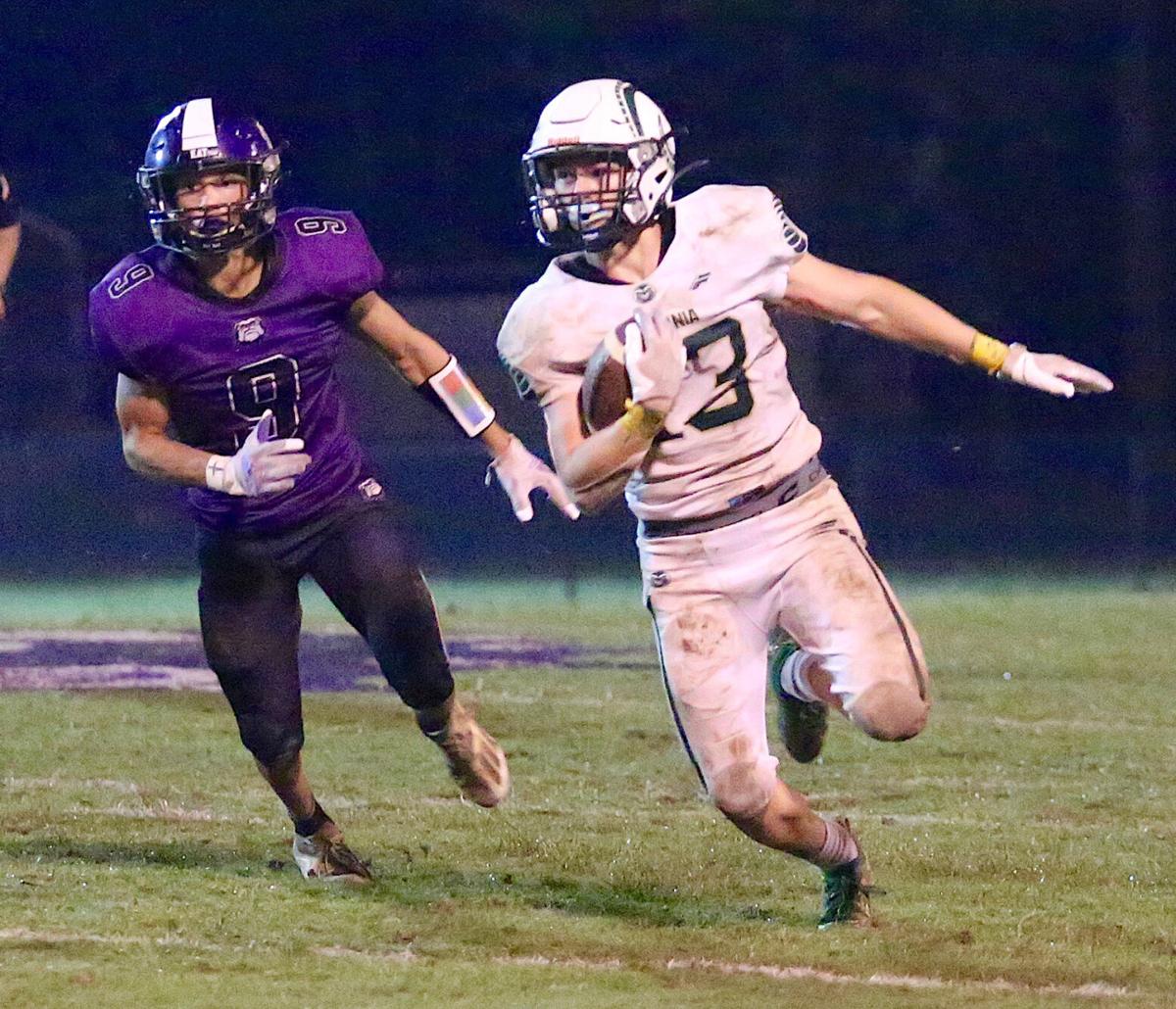 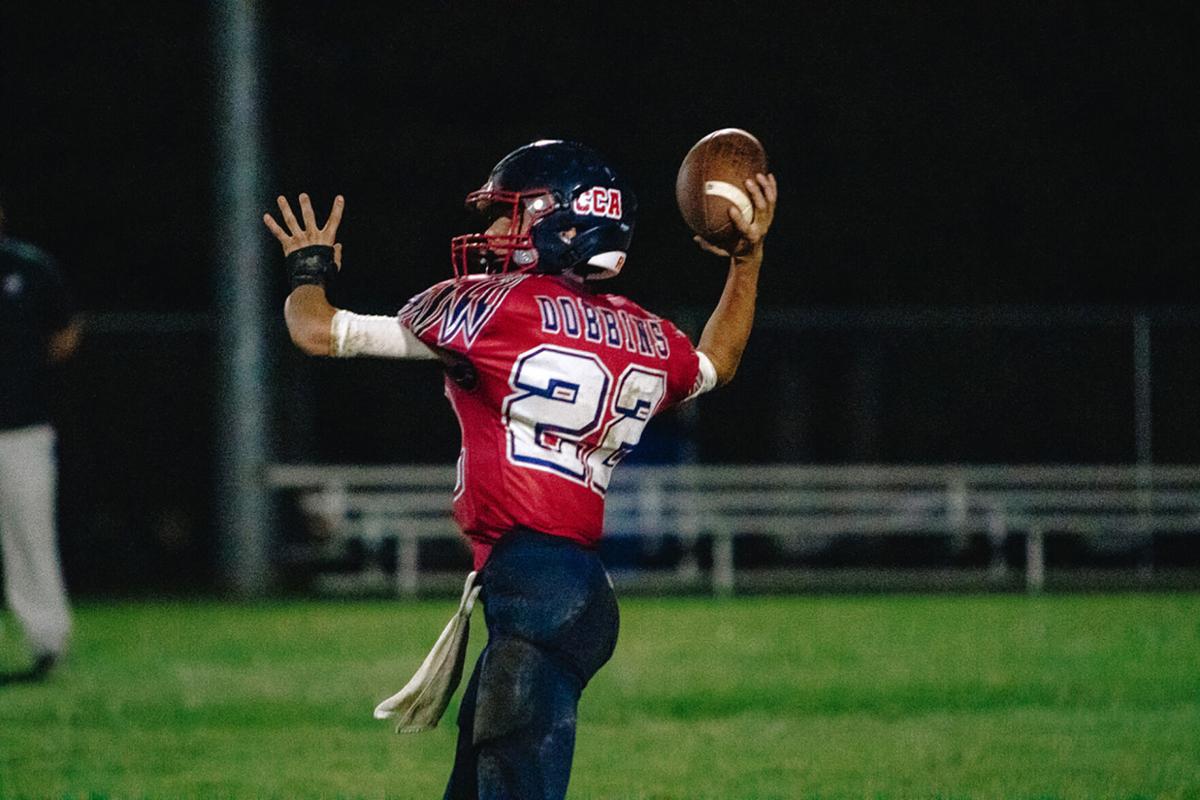 Seeking to claim the Class 3A, Region 7 crown, the Fyffe Red Devils visit the Geraldine Bulldogs at Coolidge-Isbell Field at 7 p.m. Friday.

The Red Devils scored two touchdowns in each of the first three quarters in the win.

Kyle Dukes led the way for Fyffe, rushing for 144 yards on 10 carries and finding the end zone three times on a pair of 1-yard runs, then a 79-yard scamper late in the second quarter.

Will Stephens also had a strong game for the Red Devils, totaling 61 yards on six carries and scoring twice, once from 10 yards out and another from 11 yards. Brody Hicks had the other rushing score for Fyffe, who as a team picked up 385 yards on the ground.

The Fyffe defense held NSM to 223 yards of offense, while the Bison got a pair of touchdowns in the fourth quarter to avoid the shutout, with Alex Luna scoring on a 5-yard run, and Kayden Gilley returning a punt 48 yards for a score

Against Sylvania, Geraldine got back in the game with a 90-yard kickoff return from Colton Lusher to make it a 14-7 game with 8:51 left in the first half. Geraldine cut the lead to 21-14 with 1:28 remaining on a 31-yard run from Cody Satterfield.

After Sylvania pulled ahead 27-14, the Bulldogs responded with a 1-yard run from Jaxon Colvin, setting up a 55-yard kickoff return by Carlos Mann.

Geraldine fell behind 41-21 late in the fourth.

After notching their fourth region win and third overall victory in a row last week, the Sylvania Rams visit the rival Plainview Bears in Rainsville at 7 p.m. Friday.

Preston Bates finished with 173 yards rushing and three touchdowns for Sylvania. Brody Smith completed 14 of 17 passes for 158 yards with two touchdowns and one interception.

Smith found Zack Anderson for a 65-yard touchdown with 8:20 left in the opening half, pushing the lead to 21-7.

After Geraldine made it a one-score game before halftime, Brett Sims got on the receiving end of an 11-yard touchdown pass from Smith with 3:37 remaining in the third quarter to extend the Rams’ advantage to 27-14.

Sylvania pushed its lead to 41-21 when Bates rushed for his third score of the night late in the final period.

For Plainview, Noah White rushed for 119 yards and one touchdown and passed for 27 yards and another score as the Bears amassed 440 yards of offense in a 41-7 victory against Collinsville last Friday night.

The Bears improved to 5-2 overall and 2-2 in region competition while limiting Collinsville to 164 yards.

Ider returns home to play Falkville in a 2A, Region 7 game at Wayne C. Hardman Stadium at 7 p.m. Friday.

The Blue Devils have non-region wins against Decatur Heritage Christian and Cold Springs and region victories against Whitesburg Christian and Pisgah — they topped Pisgah 35-22.

Meanwhile, the Hornets are coming off a 28-6 loss against Pisgah at Sam Kenimer Stadium, dropping to 5-3 overall and 2-2 in region play.

The Eagles held Ider scoreless until late in the fourth quarter and limited the Hornets to only 128 total yards.

Ider forced Pisgah, which entered the game as the third-highest scoring team in 2A at 43.6 points per game, to turn it over on downs in Ider territory to start the game. But the Eagles grabbed a 16-0 lead in the first quarter on freshman Legion McCrary’s 20-yard touchdown run and 2-point conversion and Mason Holcomb’s 49-yard touchdown pass to Grant Smith and another McCrary 2-point conversion.

Pisgah’s defense stopped Ider twice on fourth-and-short late in the second quarter to preserve its lead, then went in front 22-0 in the third quarter on Rhyan Barrett’s 5-yard touchdown run.

Ider turned a Pisgah fumble into its lone score, a 3-yard Matt Norman touchdown run, with 3:37 left in the game. Following a 53-yard run by McCrary, Parker Law scored from 2 yards out to put the Eagles up 28-6 with 2:02 remaining.

Hunter Robinson finished with 62 rushing yards on 18 carries while Norman had 61 yards on 15 carries for Ider.

McCrary had 162 yards on 16 carries for Pisgah.

In their first meeting last season, Falkville defeated the Hornets 38-0.

In a 3A, Region 7 contest, the Collinsville Panthers visit the Asbury Rams at 7 p.m. Friday.

The Rams edged Brindlee Mountain 36-30 last week to snap a five-game losing streak and improved their overall record to 2-5 and 1-3 in region play.

A 33-8 win against Gaston was Asbury’s first win of the season.

Outside of their game against Brindlee Mountain, the Rams haven’t registered more than six points in games against region opponents this season.

In the all-time series against Asbury, Collinsville maintains a 5-0 record, according to the Alabama High School Football Historical Society's website. The Panthers won 40-19 in last year’s game.

The game started with Collinsville forcing fumbles on Plainview's first two possessions, but being unable to take advantage and score.

After that, Plainview scored touchdowns on six of its next seven possessions.

Collinsville was led by quarterback/running back Keaton DeBoard. He scored Collinsville's only touchdown on a 75-yard run midway through the fourth quarter. On the night, he ran for 110 yards on 18 carries and passed for 14 yards. He added 64 yards on kickoff returns.

Carson Dennis rushed for 11 yards and had three receptions for 15 yards.  Charles Smith and Braxton Wright each recovered a fumble for the second game in a row.

Crossville and Sardis battle for their first win of the season in a 5A, Region 7 game in Boaz at 7 p.m. Friday.

Taking a 14-8 loss against West Point last week, Sardis fell to 0-7 and 0-4 in region competition.

Sardis reached double-digit scoring in just one game this season — a 50-22 loss against Sylvania — while failing to score in three games.

Crossville enters off a 55-6 loss against Fairview last Friday, falling to 0-7 overall and 0-4 in region play.

Crossville has been held scoreless in four games, while reaching double-digit points in a 21-20 loss against Collinsville.

Sardis holds a 31-27-1 series lead entering Friday’s game. Crossville received a win by forfeit in 2020. Before that, Sardis had won the previous 11 meetings, all according to the Alabama High School Football Historical Society’s website.

Evangel improved to 5-1 after earning a 64-6 victory against New Life Christian last week, extending its winning streak to three games.

After taking a 31-12 loss against defending ACAA eight-man state champion Russell Christian Academy, the Lions followed with a 48-20 win against Jacksonville Christian Academy and a 40-6 triumph against Success Unlimited Academy.

Blake Dobbins accounted for four touchdowns as the Eagles (3-2) earned a 49-14 win against Victory Christian (Miss.) at Rodeo Field in Rainsville last Friday.

Dobbins threw for 120 yards with two touchdowns and no interceptions on 6-of-9 passing. He rushed seven times for 84 yards and two scores.

Defensively, McGullion intercepted two passes and had four tackles, including a sack. Carter finished with seven tackles and one interception, and Konner Fortner added seven tackles.