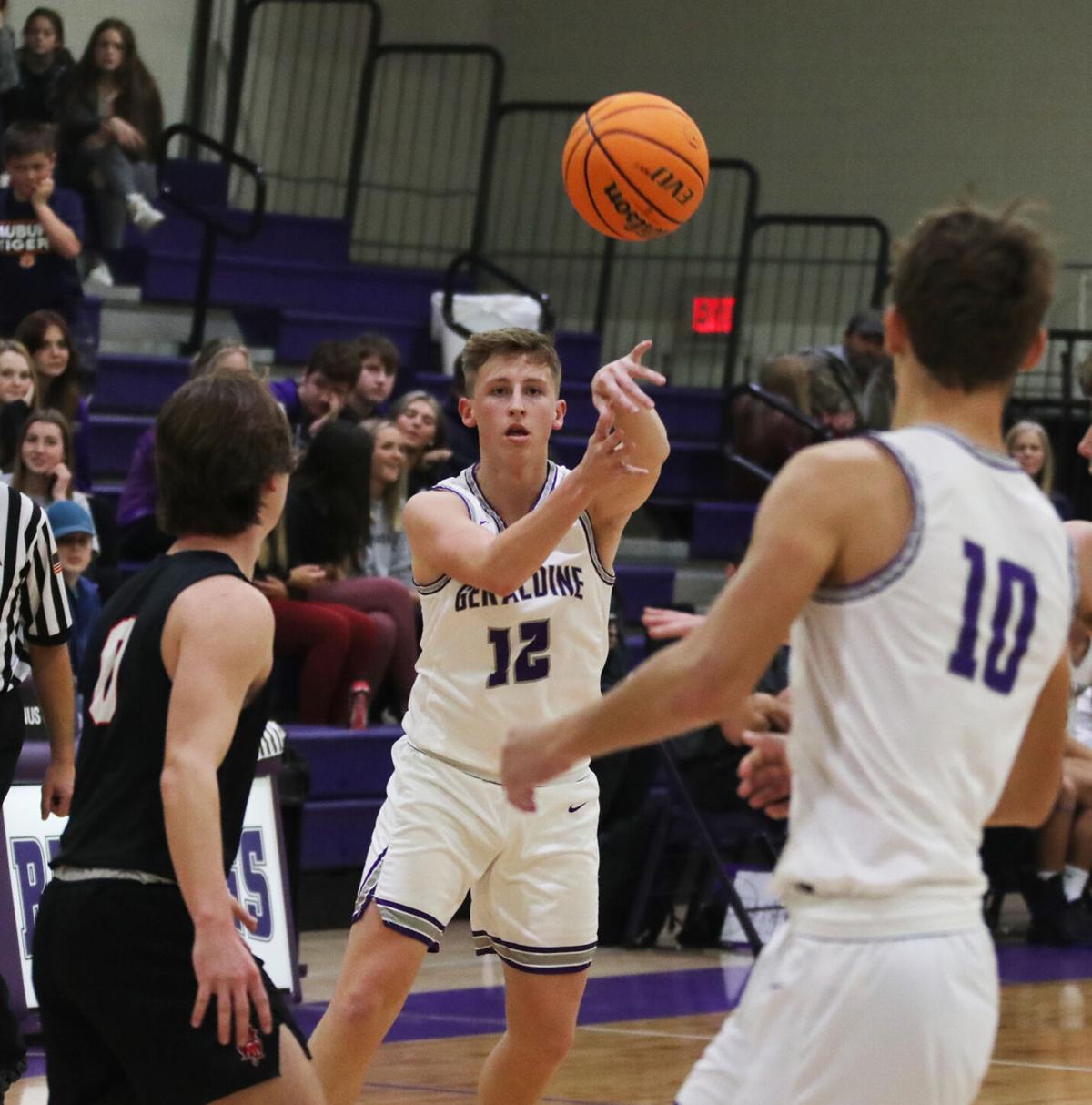 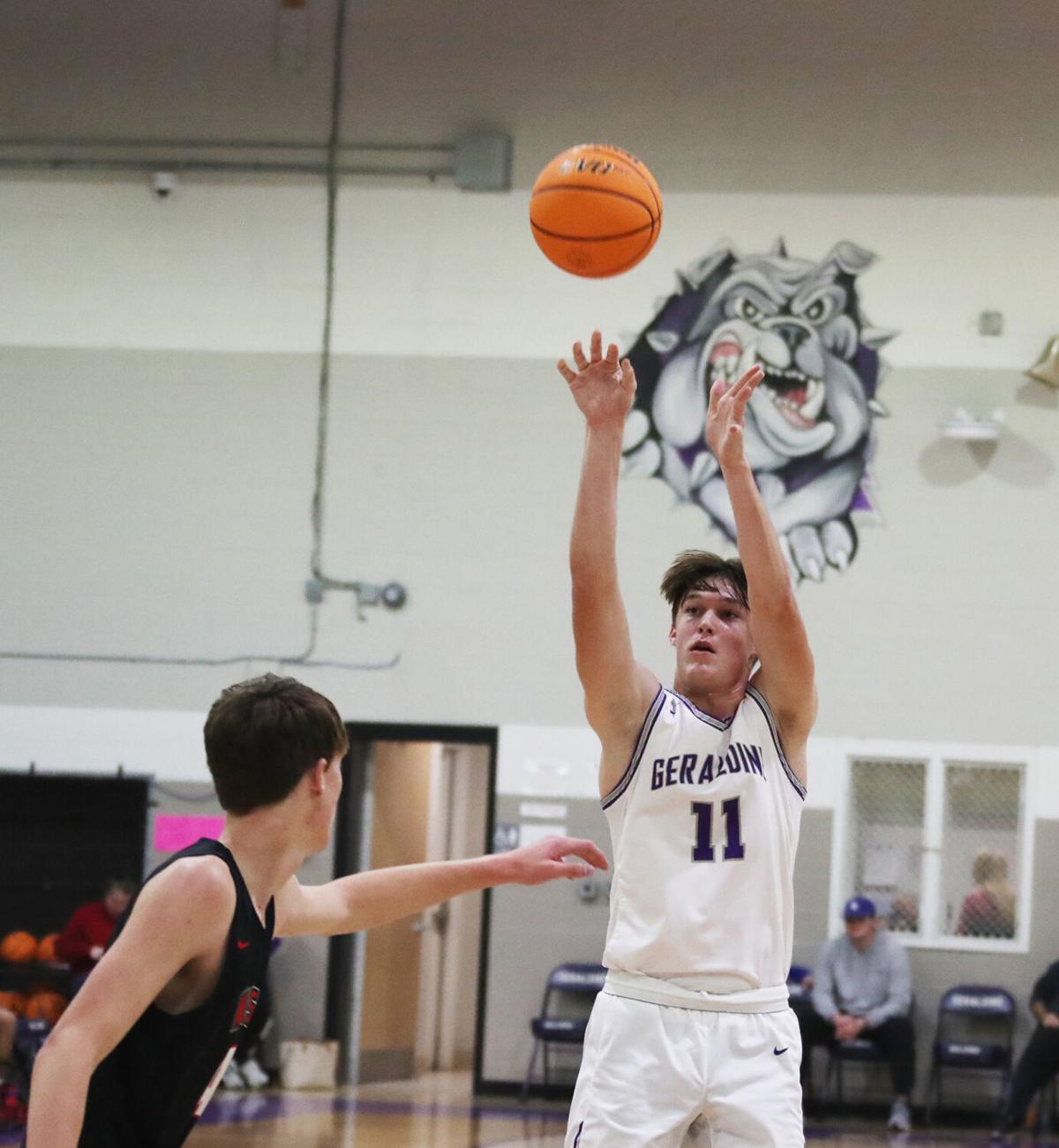 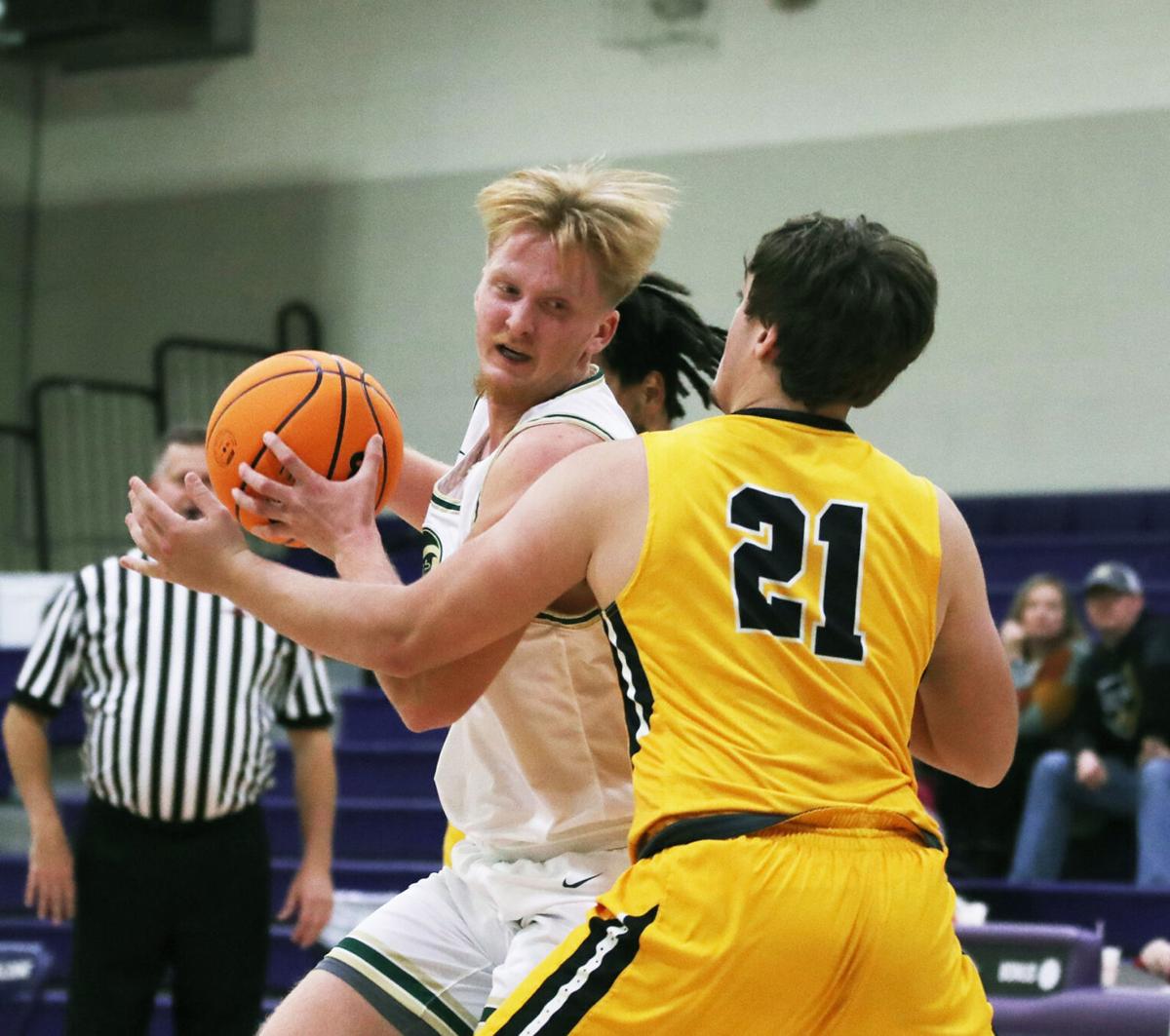 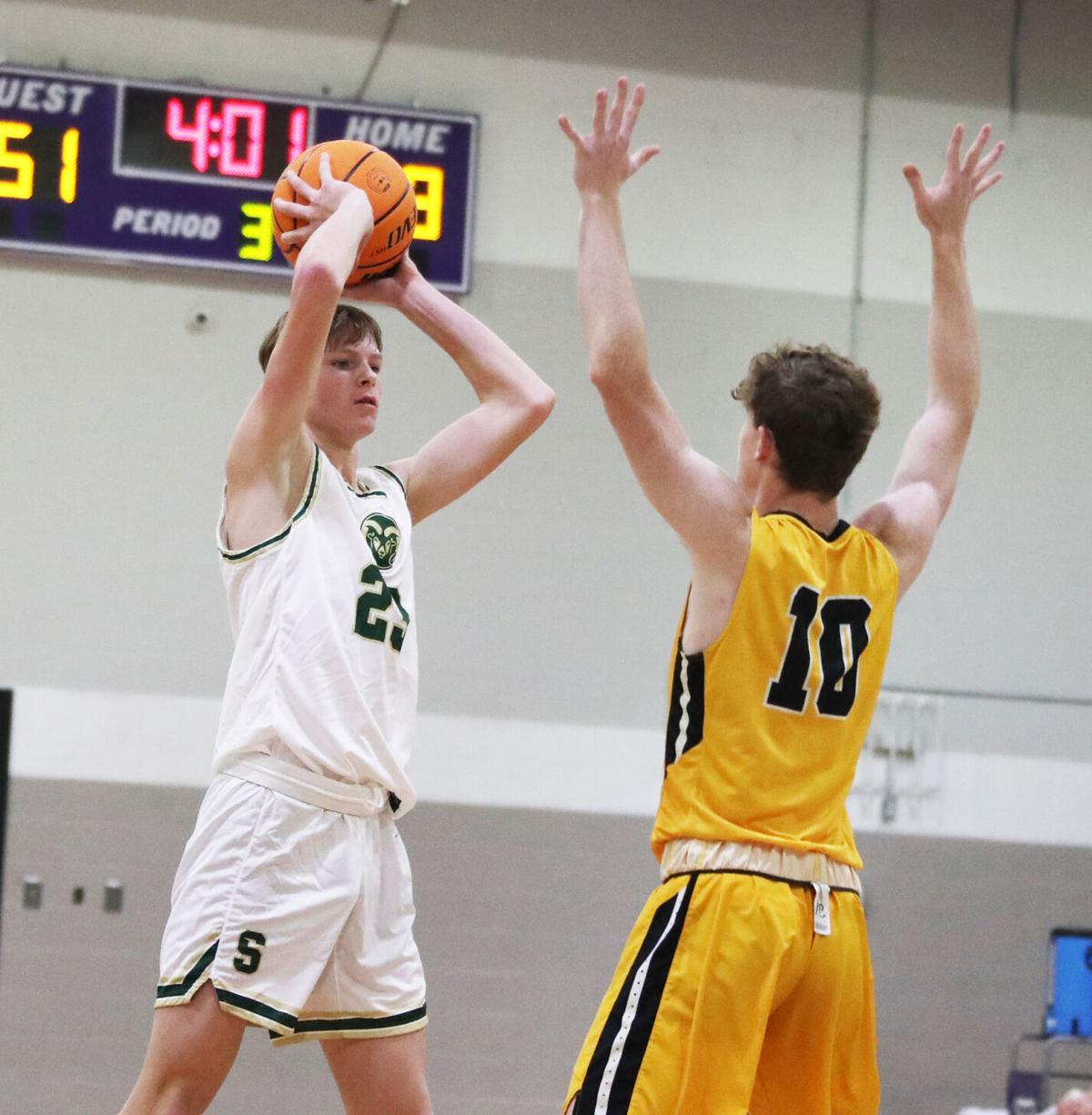 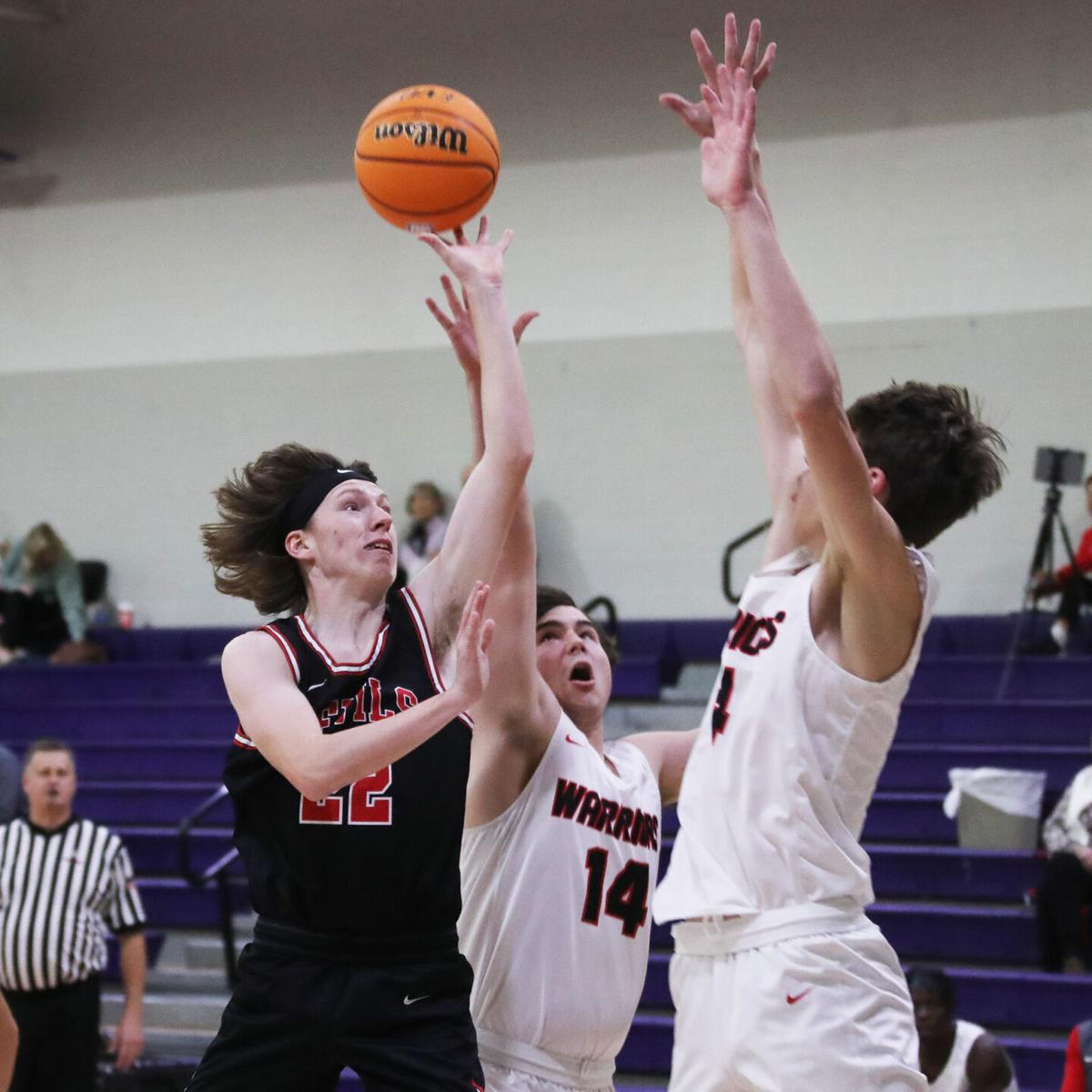 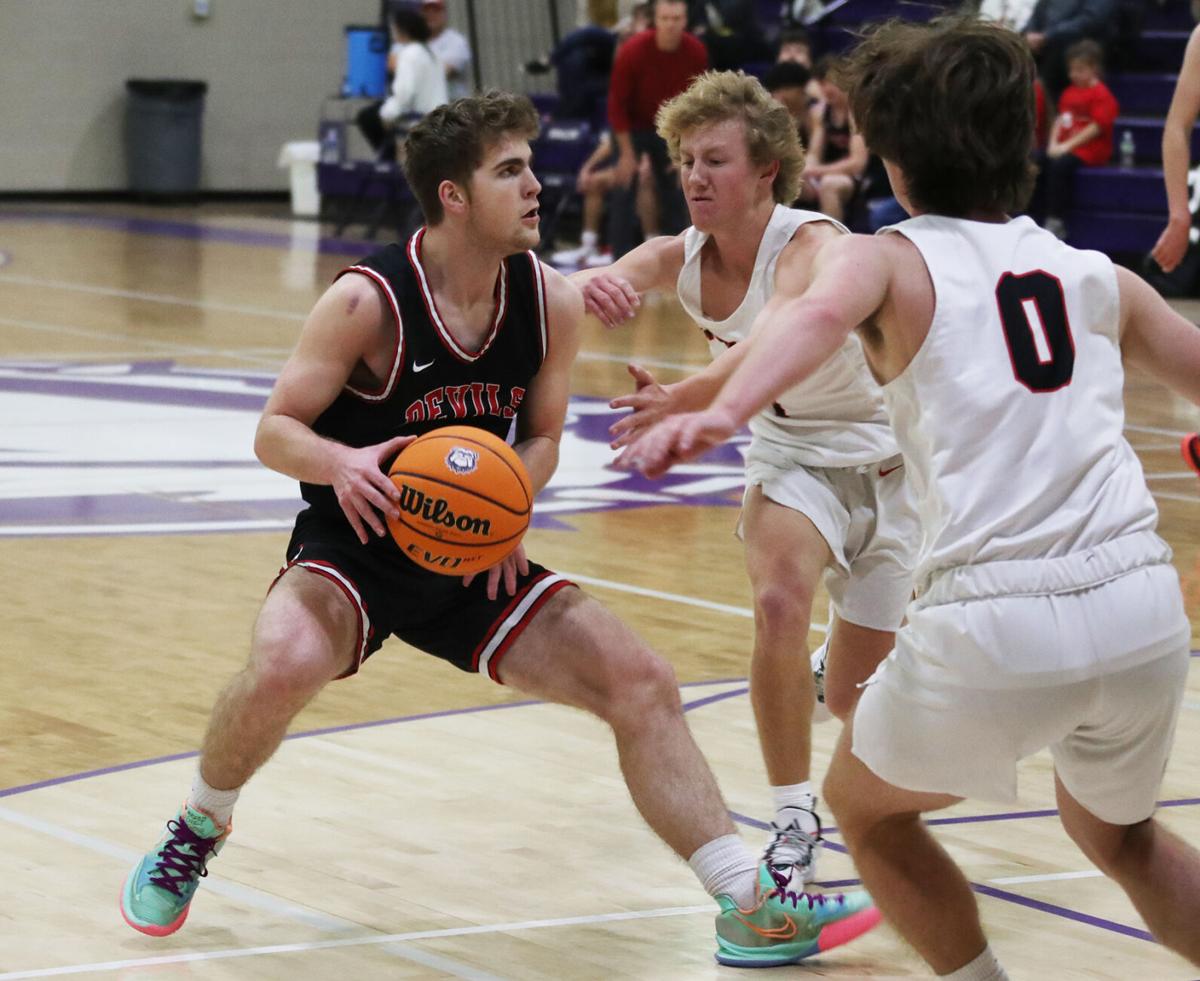 Connor Johnson made five 3-pointers and had 24 points, and Jaxon Colvin scored 20 points as Geraldine widened the scoring gap in the second quarter, cruising to a 66-40 blowout win against Westbrook Christian in the Liberty Bank Thanksgiving Shootout at Geraldine High School on Monday night.

The Bulldogs improved to 2-1 after turning a 20-16 first-quarter lead into a 36-22 halftime advantage and keeping distance the rest of the way.

Geraldine went on an 8-2 run during the second period to establish a double-digit lead. Colton Lusher made two free throws with 4:55 to play in the half to give the Bulldogs a 26-16 lead. Cody Satterfield assisted Johnson with a 3-pointer at the 3:44 mark to expand the lead to 29-16, and Colvin made a fast-break layup with 1:13 left to make it 35-20.

The Bulldogs didn’t let up in the third. Johnson hit a 3-pointer from an assist by Colvin, Colvin scored a driving layup and Lucas Bryant and Redick Smith each added a layup to put Geraldine ahead 51-33 by quarter’s end.

Josh Scott poured in six 3-pointers and finished with a game-high 27 points to help Sylvania rally from a double-digit deficit in a 76-73 loss to Cherokee County in Geraldine on Tuesday morning.

Brody Smith scored 17 points and Sawyer Hughes added 16 points for the Rams (0-5), as they came back to take the lead late in the fourth quarter after trailing 44-29 at intermission.

Sylvania outscored the Warriors 22-12 in the third by pounding the ball into the low post. Smith produced 13 of his 17 points in the quarter on five shots around the rim and three free throws.

Griffin Haygood dropped a pass down to Smith for a score with 3:02 remaining in the third to cut the deficit to 51-43. Ryan Bullock added a layup off a steal, Smith scored another shot from the low post and Scott stepped into a transition 3-pointer on a dash from Drake Whisenant to bring the Rams within 56-54 with less than a minute left.

Haygood assisted Scott with a go-ahead 3-point basket at the 2:23 mark of the fourth quarter, before Cherokee’s Jackson Amos assisted Jackson Neyman with a layup to put the Warriors in front 74-73 with 11 seconds remaining.

The Rams lost possession after the ball went out of bounds during a spinning drive to the basket by Hughes with 1.5 seconds to go.

Amos drew a foul on the ensuing inbounds play and made both free-throw attempts with 0.7 left.

On Sylvania’s last attempt, Hughes put up a Hail Mary from just beyond half court that fell short.

Tyler Stephens paced Fyffe with 18 points, Lucas Jones scored 12 points and Jesse Matthews had 10 points in a 63-59 loss against Westbrook Christian in Geraldine on Tuesday morning.

Windle added a 3-point basket to Westbrook Christian ahead for good at 47-44.

An Eli Butts jumper with 5:10 left in regulation brought the Red Devils within 55-52, before Westbrook Christian’s Asher Keck added a driving layup.

Stephens pulled up for a 3-pointer off an inbounds pass from the far side of the court with 6.2 seconds remaining.

White split a pair of foul shots and time ran out for Fyffe.

At the end of the first quarter, Westbrook Christian led 18-14.

Stephens assisted Matthews with a transition 3 and Stephens made two foul shots and a 3-pointer from an assist by Nathaniel Baugh to highlight Fyffe’s second-quarter scoring effort.

Cloudy with rain ending for the afternoon. Thunder possible. Morning high of 62F with temps falling to near 45. NNW winds at less than 5 mph, increasing to 10 to 20 mph. Chance of rain 90%.

Except for a few afternoon clouds, mainly sunny. High 52F. Winds ENE at 5 to 10 mph.

Cloudy with periods of light rain. Low around 50F. Winds light and variable. Chance of rain 80%.

Thunderstorms in the evening, then mainly cloudy overnight with light rain possible. Low near 60F. Winds S at 5 to 10 mph. Chance of rain 80%.

Rain early...then remaining cloudy with showers late. Low 33F. Winds WNW at 5 to 10 mph. Chance of rain 80%. Rainfall near a quarter of an inch.