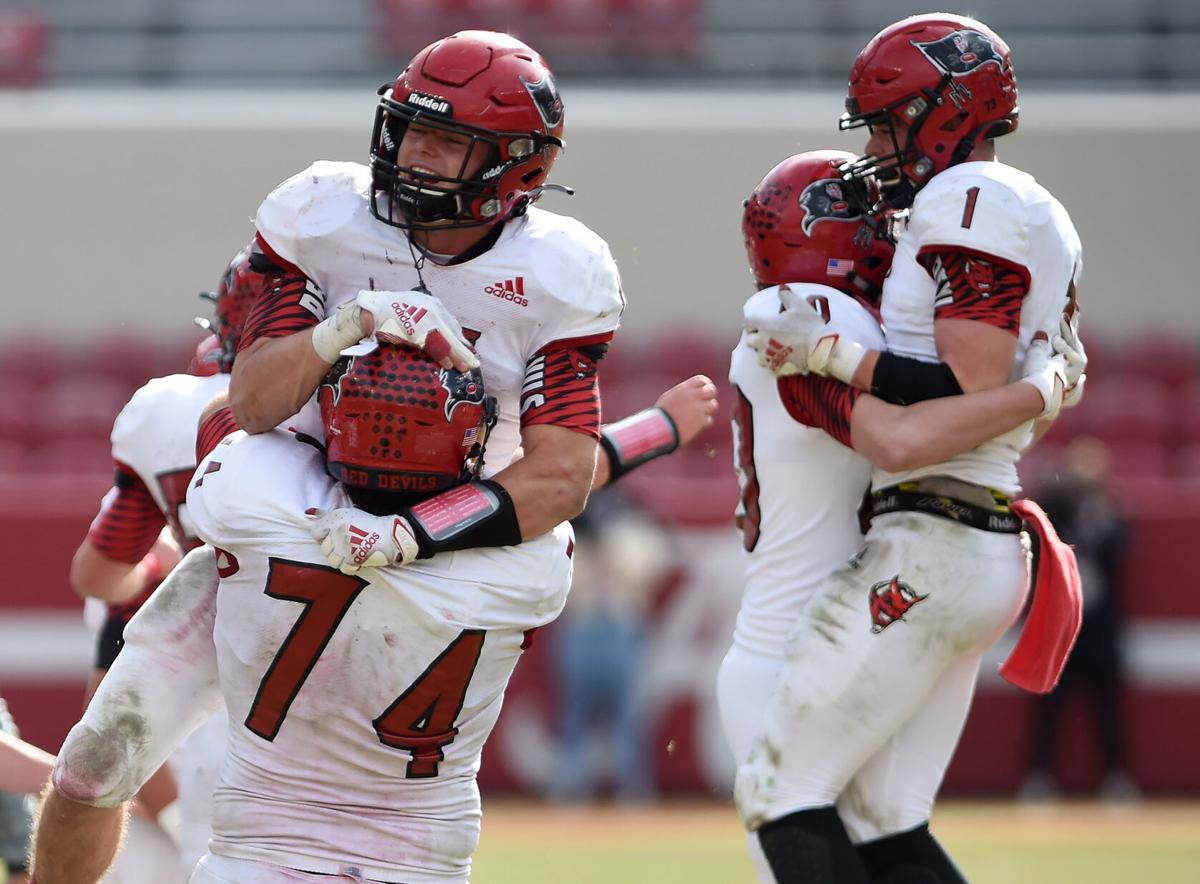 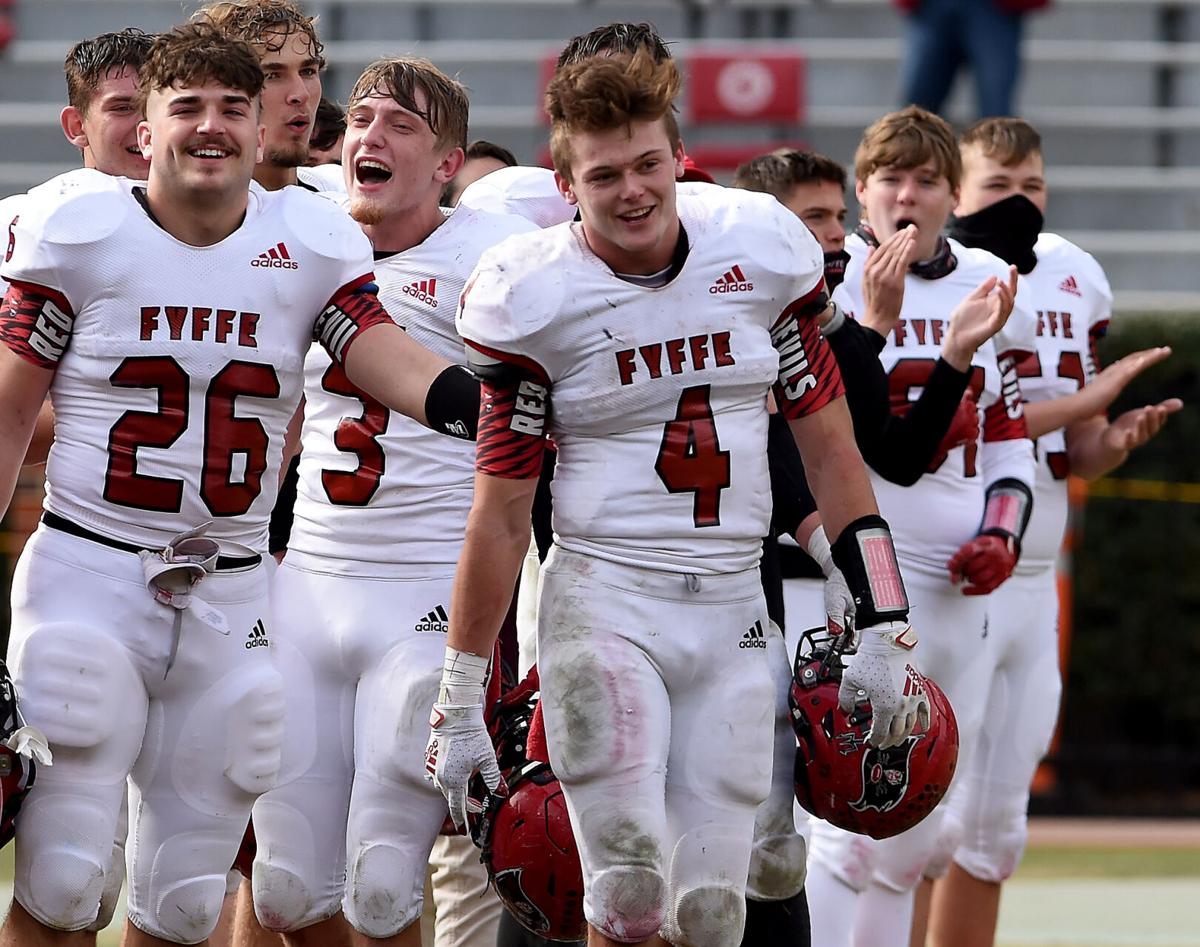 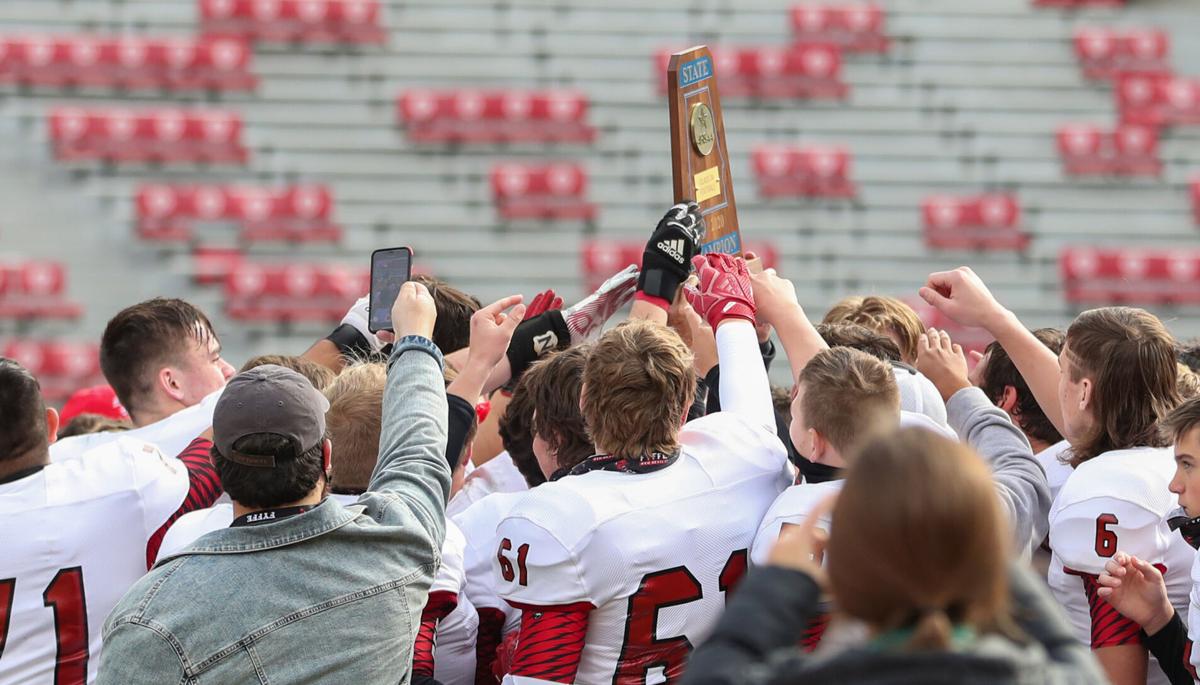 Fyffe celebrates the win over Montgomery Catholic during the AHSAA Super 7 Class 3A championship at Bryant-Denny Stadium in Tuscaloosa, Ala., Thursday, Dec. 3, 2020. (Dennis Victory | preps@al.com) 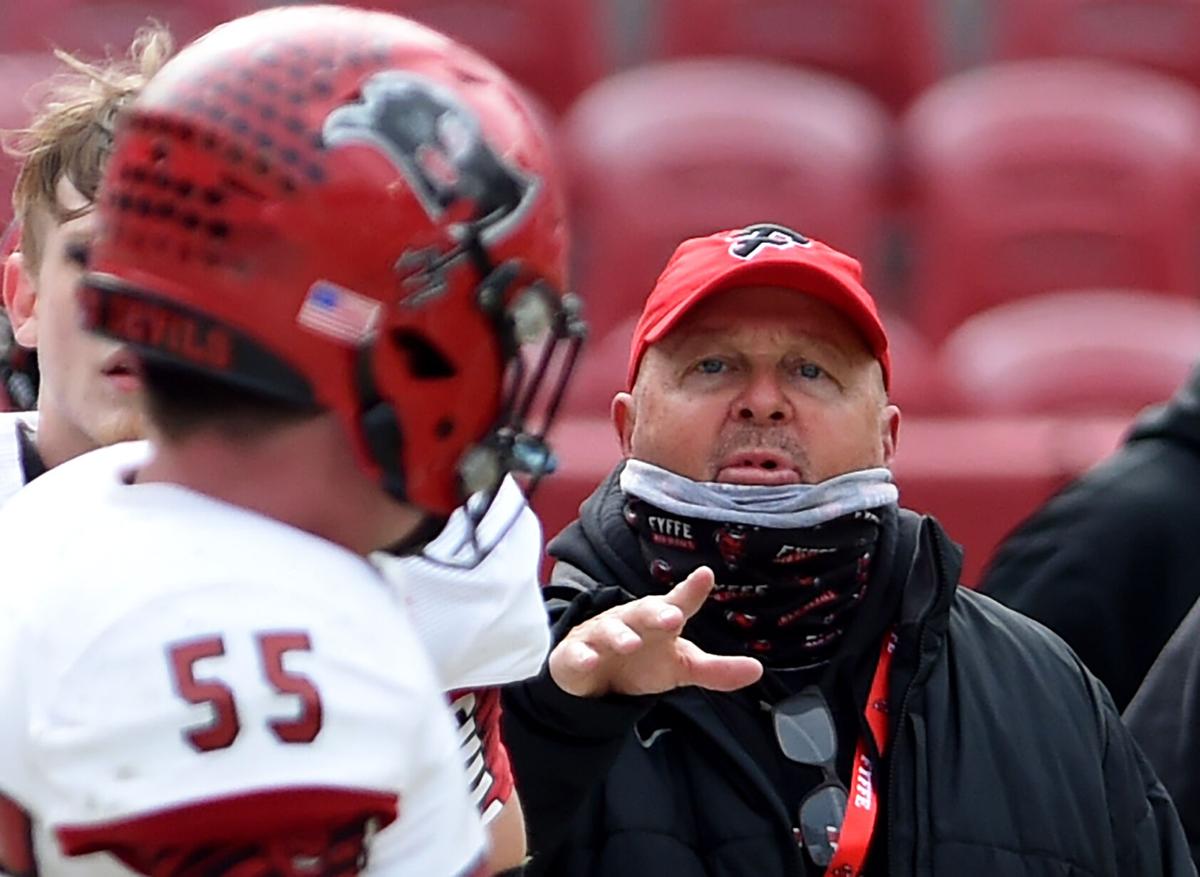 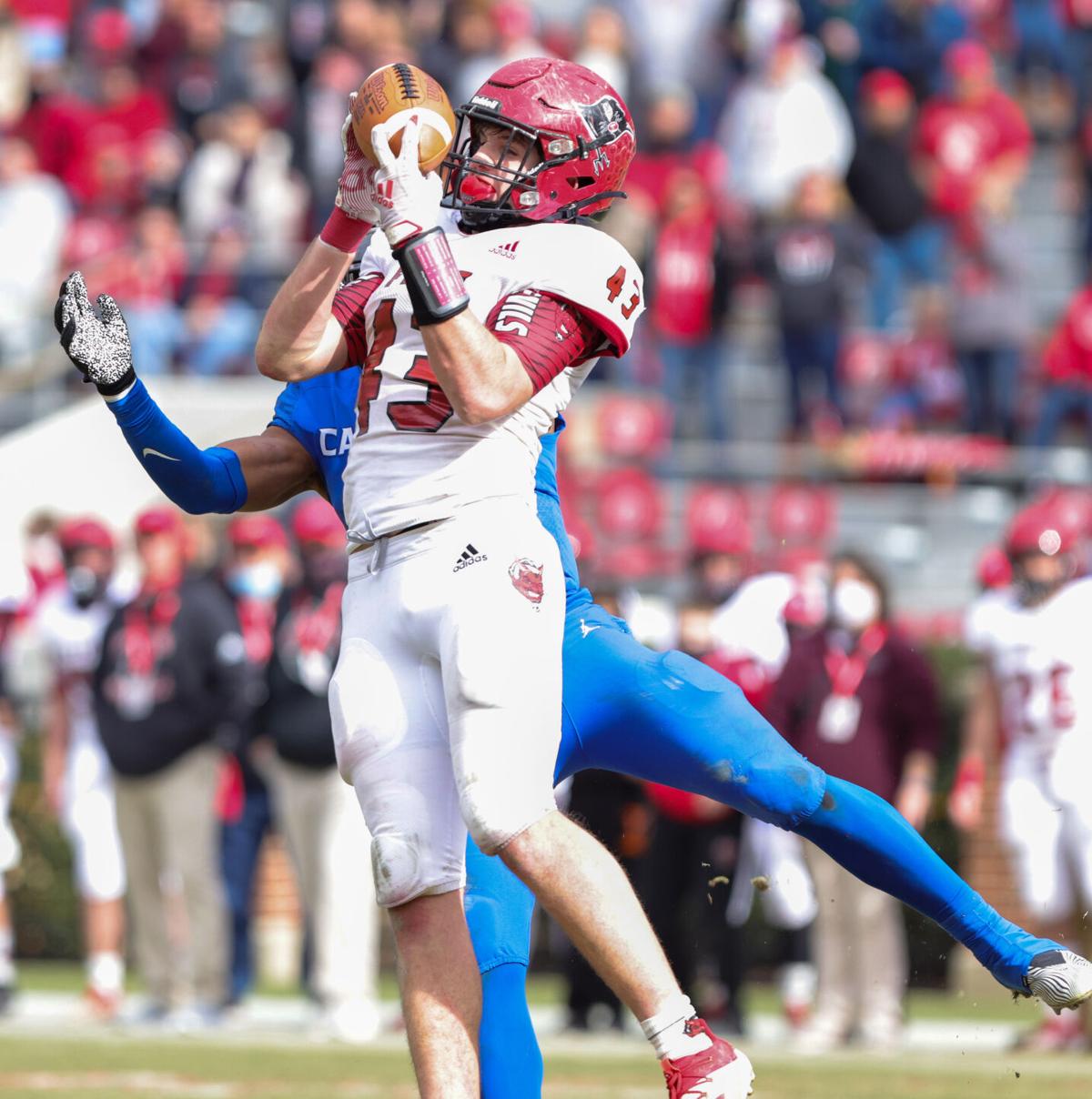 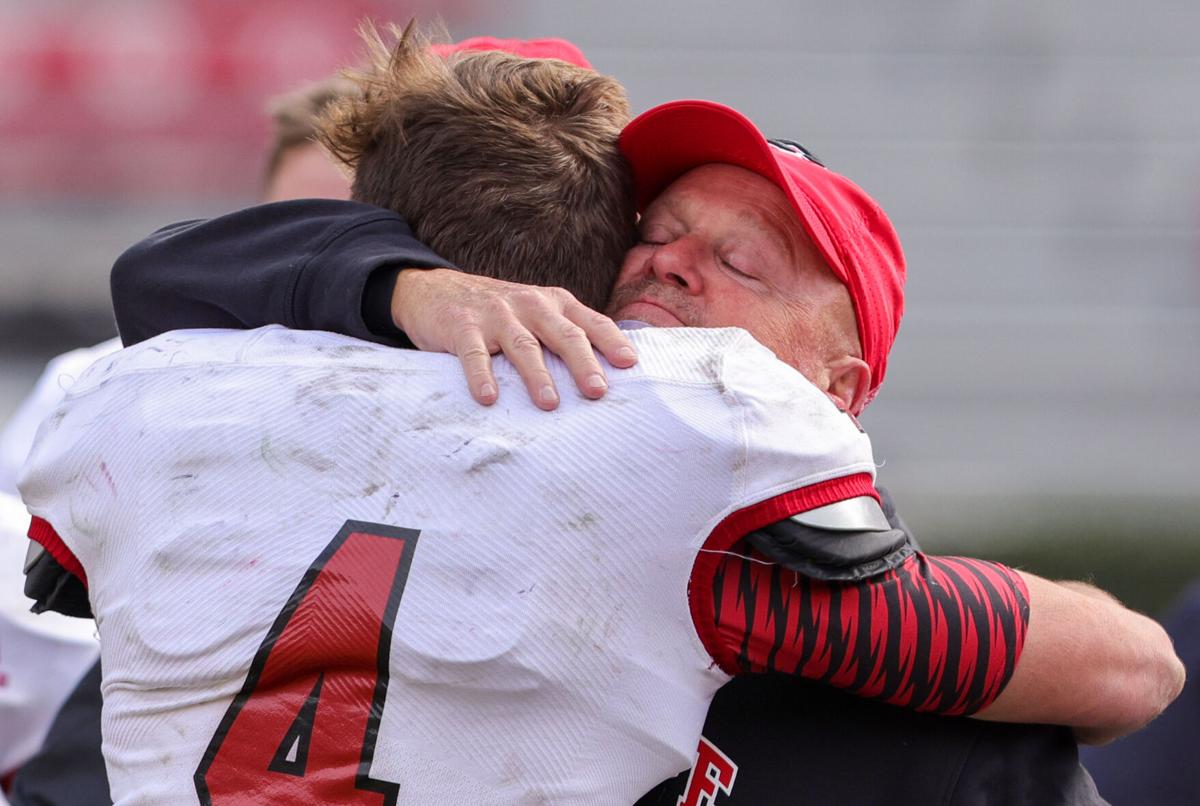 Fyffe celebrates the win over Montgomery Catholic during the AHSAA Super 7 Class 3A championship at Bryant-Denny Stadium in Tuscaloosa, Ala., Thursday, Dec. 3, 2020. (Dennis Victory | preps@al.com)

After the clock hit triple-zero at the Class 3A state championship game Thursday, there was plenty of sweetness to savor.

The offensive line created a hole in the middle of the field and Ike Rowell walked in for the go-ahead score to propel the Red Devils to a 21-16 comeback victory against the Montgomery Catholic Knights in the Class 3A state championship game at Bryant-Denny Stadium.

“It’s just unbelievable. I don’t know what else to say,” Benefield said after his team completed its third straight 15-0 season for a third consecutive state championship (fifth title in seven years) and first since joining 3A.

Rowell rushed for a game-high 140 yards on 36 carries with three touchdowns, completed 5 of 7 passes with no interceptions for 155 yards and returned five kickoffs for 104 yards, as he garnered championship MVP honors. The senior accounted for 295 of Fyffe’s 316 yards of offense.

After trailing the entire game, Fyffe gained a safety after a review determined that Montgomery Catholic’s punter stepped out of bounds on a punt attempt with 3 minutes left in regulation, bringing the Red Devils within 16-15.

Rowell got Fyffe’s offense in comeback mode when he found Brody Dalton on a crossing route for a 29-yard gain down to the Knights’ 4-yard line.

“When we need a (passing) play, we’re always going to throw it to Big Dawg here,” said Benefield, pointing to Dalton during the team’s postgame press conference.

“(Our players) knew the game was on the line right there and we had an opportunity to come back and win.”

Two plays later, Rowell walked in for the go-ahead score with 1:03 remaining. Justin Stiefel received the ball on a sweeping run to the left on the following 2-point conversion attempt, but he was stopped short of the goal line.

“As much work as we put into the summer, we couldn’t quit,” Rowell said.

Stiefel, who finished with 79 yards receiving on two catches, intercepted a pass on Fyffe’s 29-yard line at the 10:26 mark in the fourth. Rowell had a run of 19 yards and a 43-yard pass to Stiefel on the drive that advanced Fyffe to the 1-yard line.

But Montgomery Catholic (12-3) made a goal-line stand against a Rowell rush on fourth-and-1 and forced a turnover on downs.

Fyffe finished the 2020 season with a program-record 45-game win streak, including a 15 state postseason-win streak.

“We don’t know how to give up,” said Dalton, who caught three passes for 76 yards.

Montgomery Catholic returned the opening kickoff to Fyffe’s 25-yard line and Stiefel made the touchdown-saving tackle. Rowell intercepted a pass in the end zone on the drive, but a pass interference penalty negated the defensive play. Fyffe held the Knights to a field goal at the 9:25 mark in the period.

Caleb McCreary tossed a 14-yard scoring pass to Myles Butler in the shallow-left corner of the end zone with 3:16 left in the first quarter. The ensuing extra-point kick attempt failed, giving the Knights a 9-0 lead.

With 29 seconds left in the opening period, Butler caught a pass from McCreary and ran ahead for a 56-yard touchdown. The ensuing extra-point kick extended Montgomery Catholic’s lead to 16-0.

Fyffe was held without a first down throughout the entire opening quarter. Rowell carried up the middle on a third-and-4 play at the 10-minute mark in the second quarter for the team’s initial first down. However, the drive stalled with a Stiefel punt from Fyffe’s 49.

“We’re not a typical come-from-behind type of team,” Benefield said, “but this is a special team.”

Rowell engineered Fyffe’s most successful drive of the first half by capping it with a 4-yard touchdown run up the middle with 2:33 left until halftime.

Rowell hit Dalton for a 13-yard gain to the Knights’ 20, before Rowell reached the end zone three plays later. Dalton’s extra-point kick missed the uprights and made it a 16-6 deficit.

Just as it looked as if Fyffe could cut the deficit to three points at halftime, a rallying touchdown was erased.

Rowell blocked a Montgomery Catholic 30-yard field goal attempt as time expired, scooped it and sprinted 78 yards for a score. And as the Fyffe faithful celebrated, Montgomery Catholic head coach Aubrey Blackwell challenged that the play clock expired prior to the ball being snapped for the Knights’ field goal try. After a review, game officials overturned the play and Rowell’s score.

“I thought (the officials) were going to call it back on us,” Blackwell said of the late first-half play. “I was just waiting for the flag and when the huge shift happened, I wanted to give (Butler) a chance to go catch another one.”

The Knights had one more shot at the end zone after the clock was reset to 4 seconds, but a pass went incomplete through the back of the end zone.

Mulligan and Dalton sacked McCreary for a 15-yard loss midway through the third, forcing the Knights to punt. A high snap forced Gabe Russo to chase it down; he narrowly kicked it away and avoided a block.

Rowell rushed ahead for a 6-yard pickup on fourth-and-1 at Fyffe’s 35 to keep a drive alive. He threw a 36-yard pass to Stiefel on the next play and the Red Devils used a series of short runs to break into Montgomery Catholic’s red zone.

Rowell rushed for a 3-yard touchdown dive at the start of the fourth. Dalton added an extra-point kick and pulled Fyffe within 16-13 at the 11:23 mark, capping a 13-play, 75-yard drive spanning 7 minutes, 2 seconds.

“These seniors have left a legacy that will be hard to repeat,” Benefield said. “...The championships will rust and fade but their memories never will.”

Montgomery Catholic’s McCreary was 14 of 24 passing for 188 yards, and Butler had six catches for 109 yards as the team finished with 272 yards of offense.

It was the Knights’ first state championship appearance in program history.

“Catholic had a great team and we didn’t know if we could stay with them or not,” Benefield said.