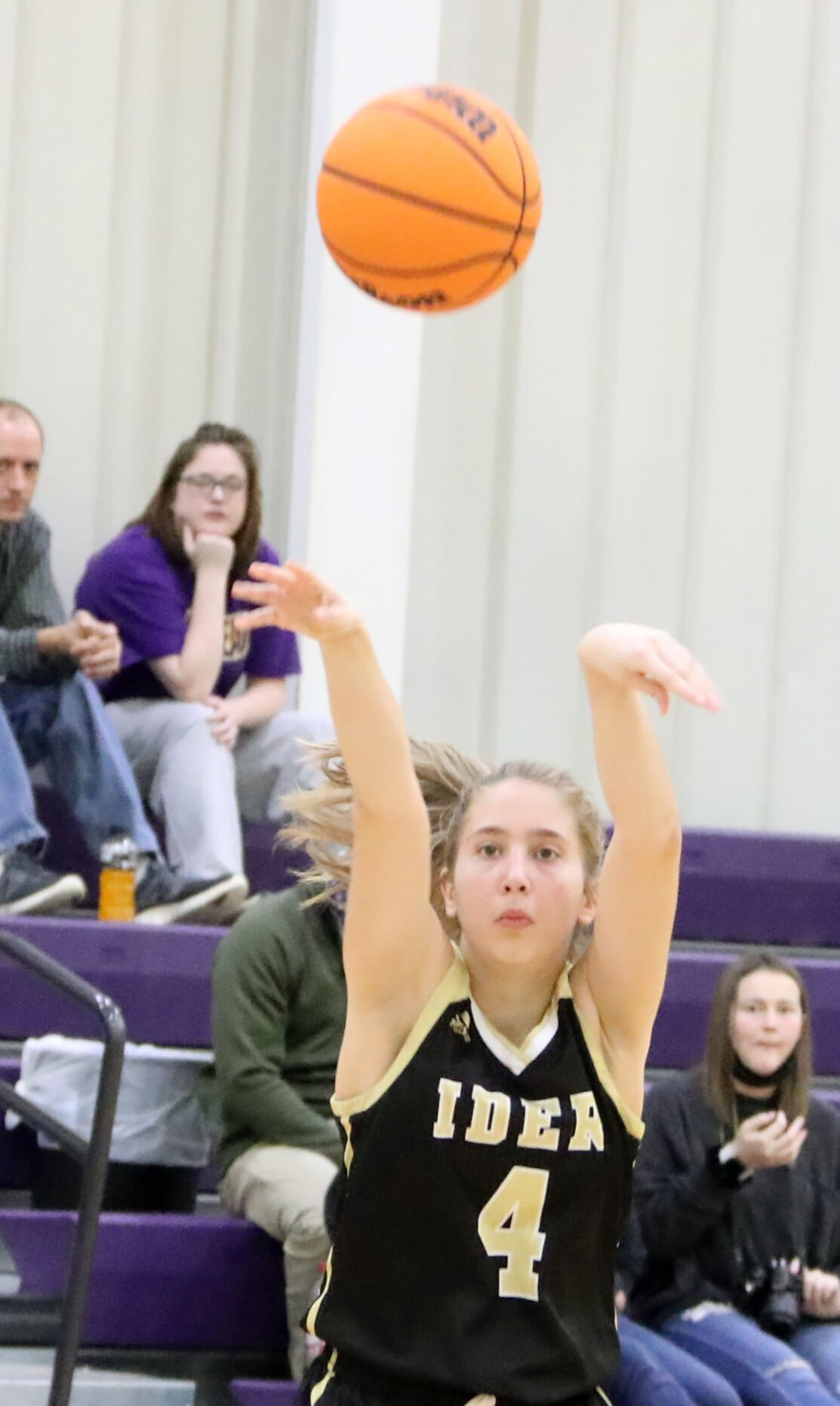 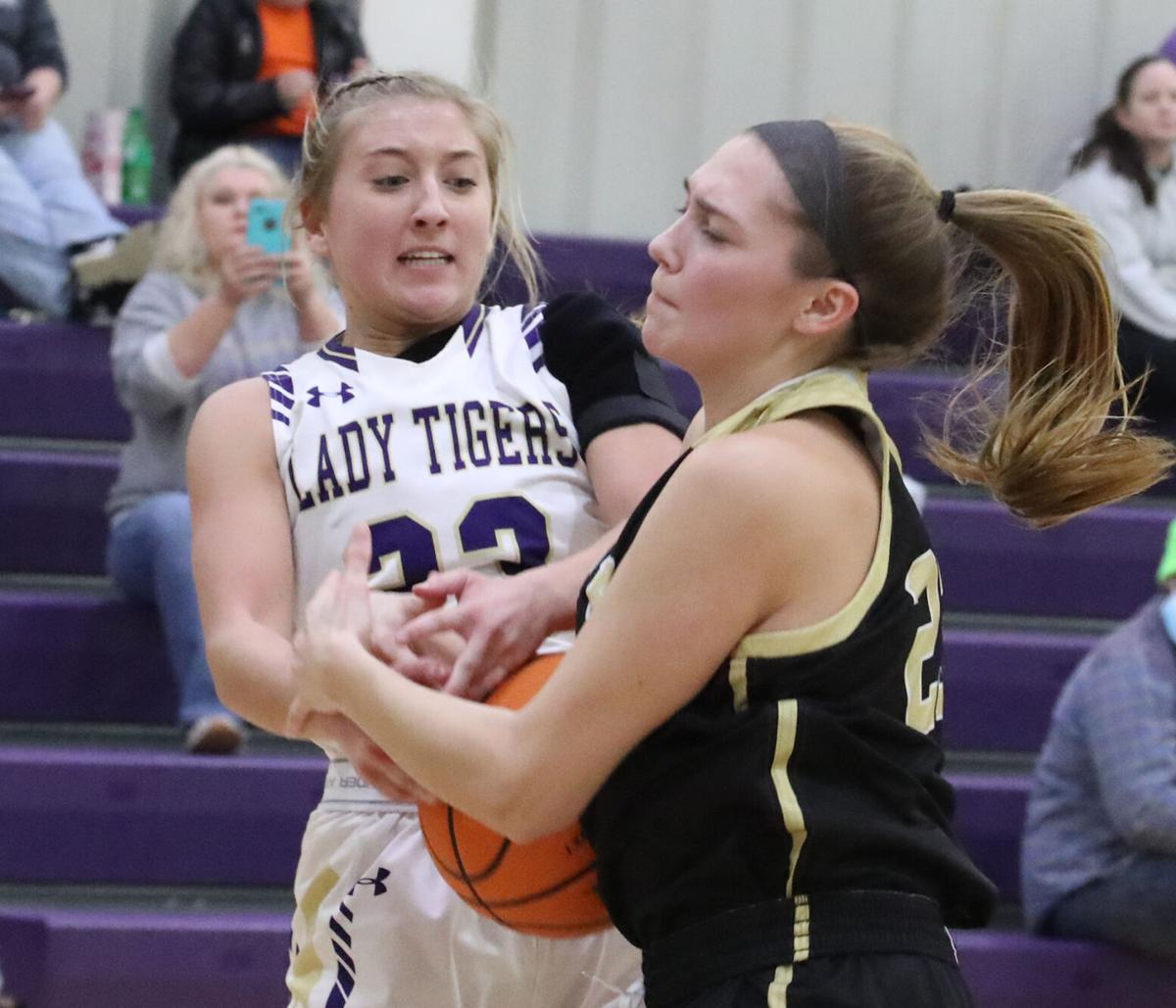 Valley Head's Emma Harrison, left, and Ider's Erin Pruett battle for possession of a loose ball during a game in Valley Head on Monday night.

Valley Head's Emma Harrison, left, and Ider's Erin Pruett battle for possession of a loose ball during a game in Valley Head on Monday night.

Kaleigh Carson hit four 3-pointers and finished with 17 points as the Hornets amassed 16 shots from beyond the arc in a 72-41 romp past the Valley Head Tigers at Lowell Barron Gymnasium on Monday night.

“We started making shots. We finished with 16 3s, which is probably our season-best,” Ider coach Dustin Bryant said.

Ider (13-6) rolled to a 25-11 first-quarter lead behind Carson’s four 3-pointers and a 3-pointer apiece from Savannah Seals, Maliyah Smith and Lexi Brewer. Seals finished with 14 points and Smith and Makinley Traylor each added nine points.

“When (the Tigers) went zone we moved the ball really well,” Bryant said. “They went zone really early in the game and that helped us, because that’s the first zone team we’ve played this year.”

Emma Harrison scored 16 points and Jenna McKenzie added 11 points for the Tigers (1-5), who were limited to a basket in the second quarter and trailed 42-13 at halftime.

“We started locking down with man-to-man defense,” Bryant said. “We got out of our press and started focusing on halfcourt defense.”

Seals passed to Alayna Chapman for a transition layup to give Ider a 29-11 lead at the 6:34 mark in the period. Seals assisted Erin Pruett with a layup on the Hornets’ next possession and Tigers coach Jamie Vest called timeout with 6:15 remaining.

Smith sank a 3-pointer to advance Ider’s advantage to 42-11 with 2:20 to play. McKenzie hauled in a rebound and scored from under the basket with 13 seconds left in the half for Valley Head’s only points of the period.

“I think that we were trying to force shots and not rebounding; that’s something we’ve been trying to work on,” Vest said.

Valley Head has been forced into quarantine multiple times this season. With just six games and four practices since Dec. 11, Vest said the team just needs time to reacclimate to the flow of the season.

“We’ve not been able to play consistently; we’ve been in quarantine so many times,” she said. “I think we’re just not in our groove yet. We have to keep playing to get our offense down.”

Valley Head ended the third quarter with a buzzer-beating layup from Kylee Elkins off an assist from Lydia Crane, narrowing the margin to 58-29.

Harrison scored 10 of her 16 points in the final period. She accounted for all but two of the Tigers’ fourth-quarter points. Crane added a 2-point basket during the final stretch.

Vest said with three practices scheduled leading up to Friday’s visit to Woodville, she looks for the team to work on settling into its offense and being patient.