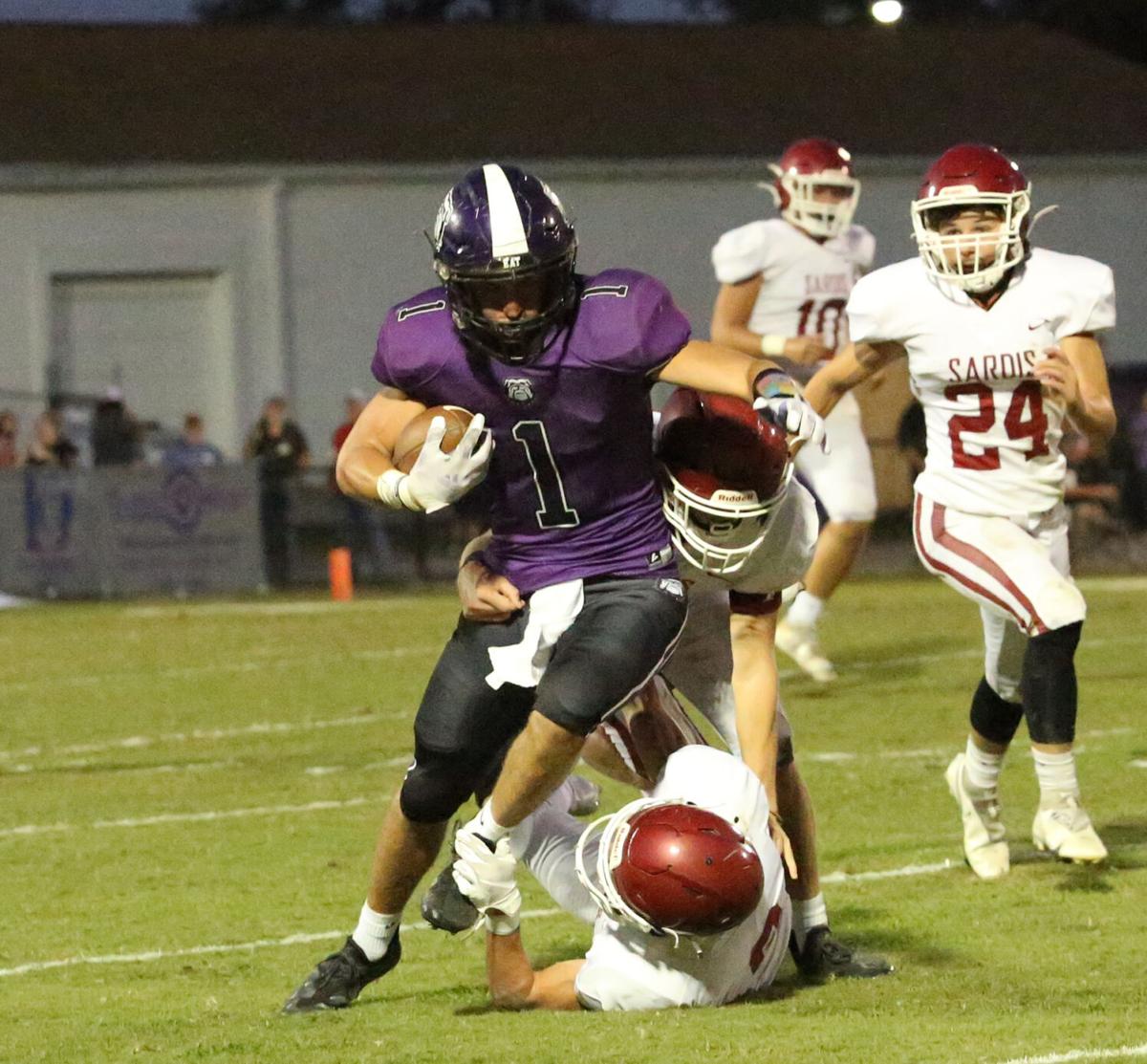 Geraldine's Austyn Banks (1) runs against a pair of Sardis defenders during a non-region game in Geraldine last Friday night. 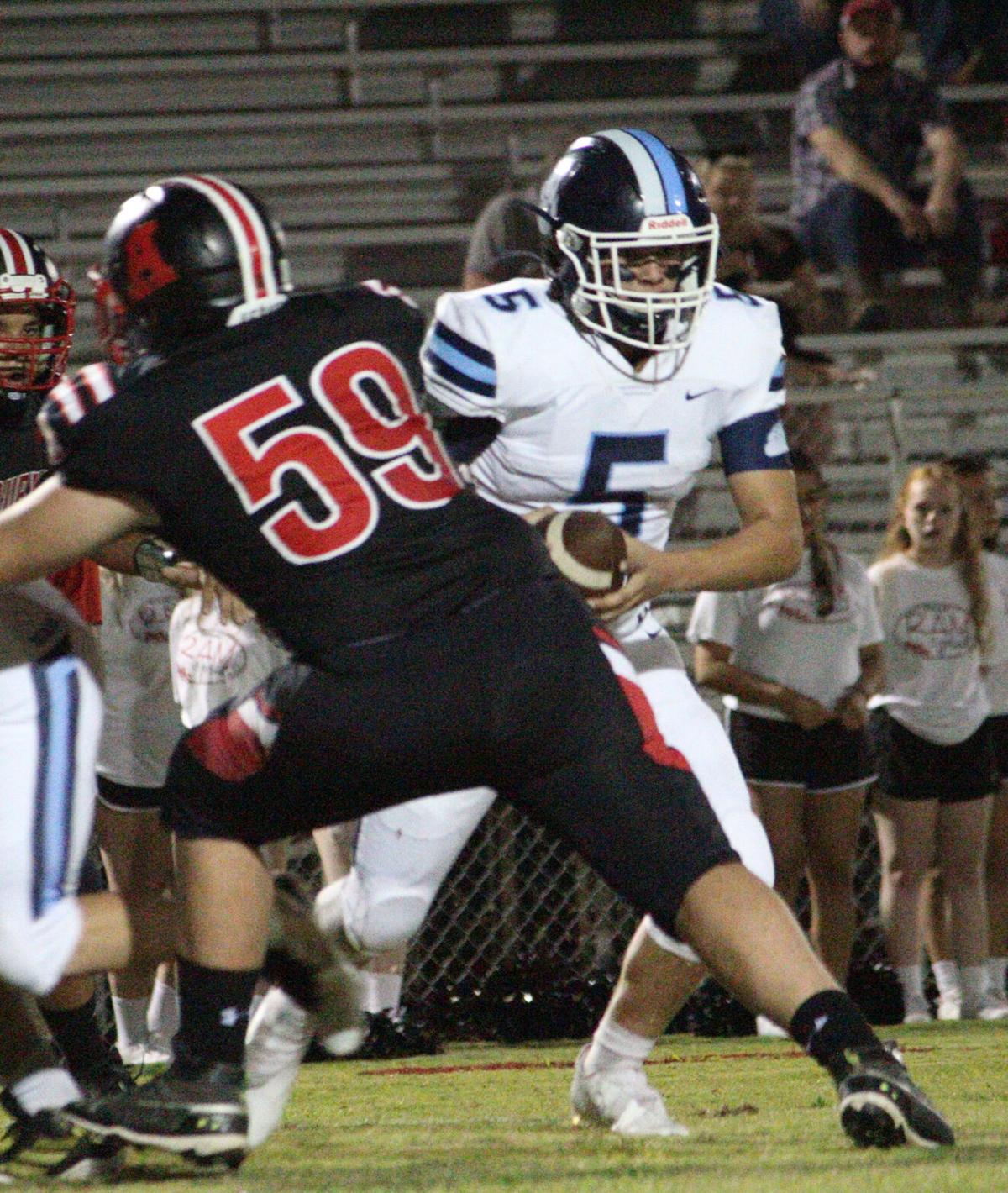 Plainview's Brodie Bryant (5) keeps the ball after faking a handoff during a Class 3A, Region 7 game against Asbury last Friday night. 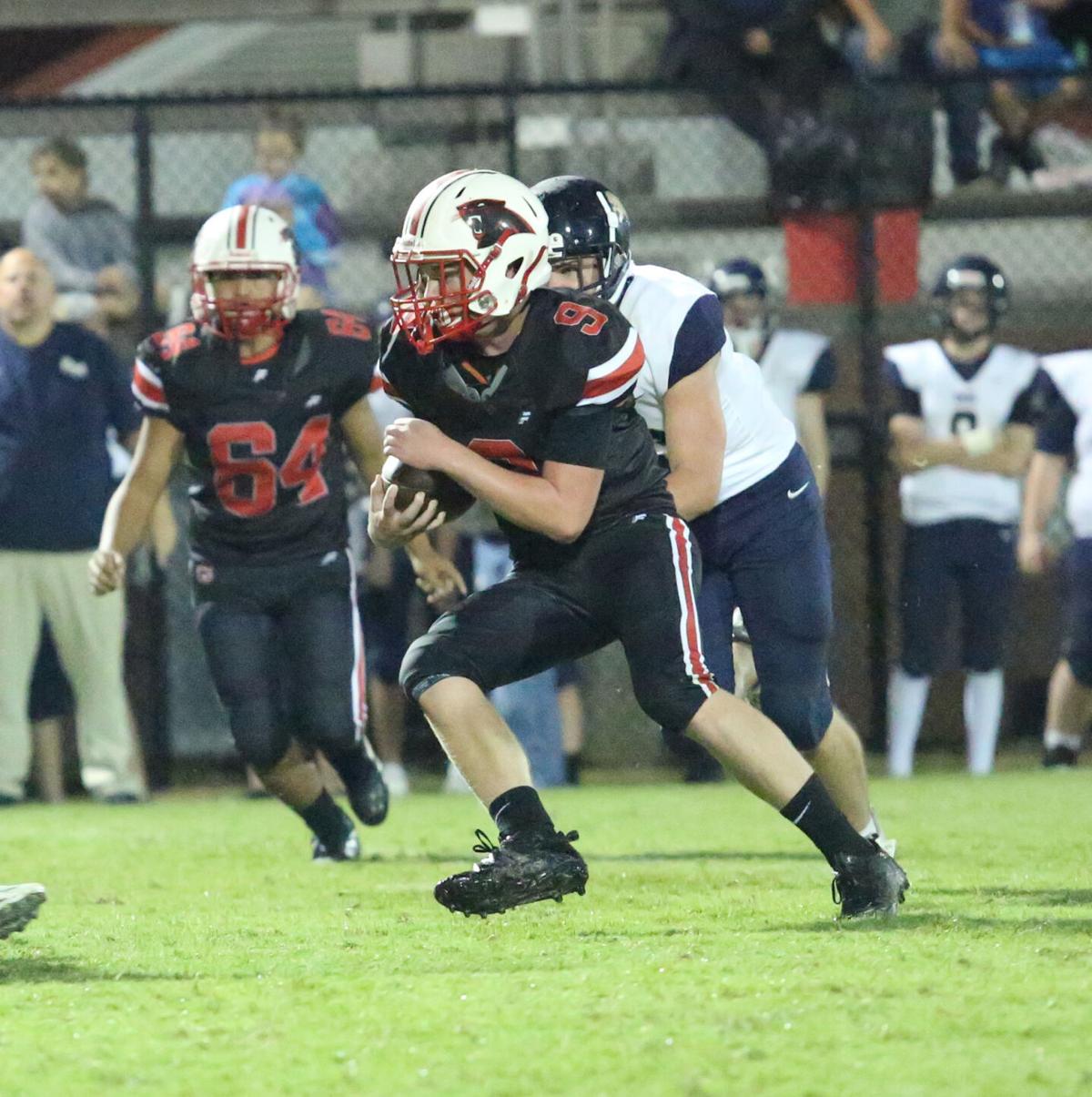 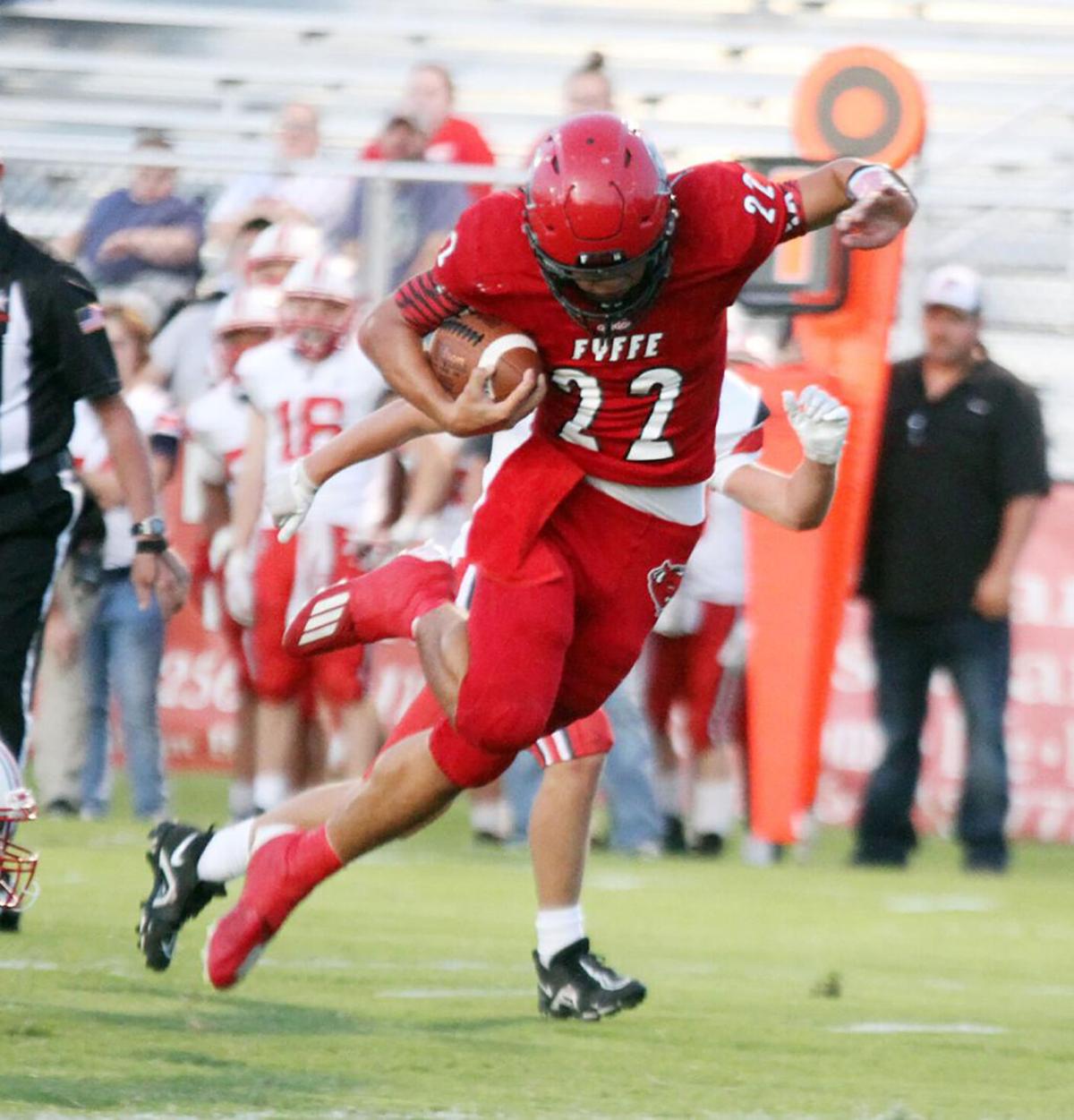 Fyffe’s Brodie Hicks avoids a tackle during a game against Collinsville at Paul Benefield Stadium earlier this season. 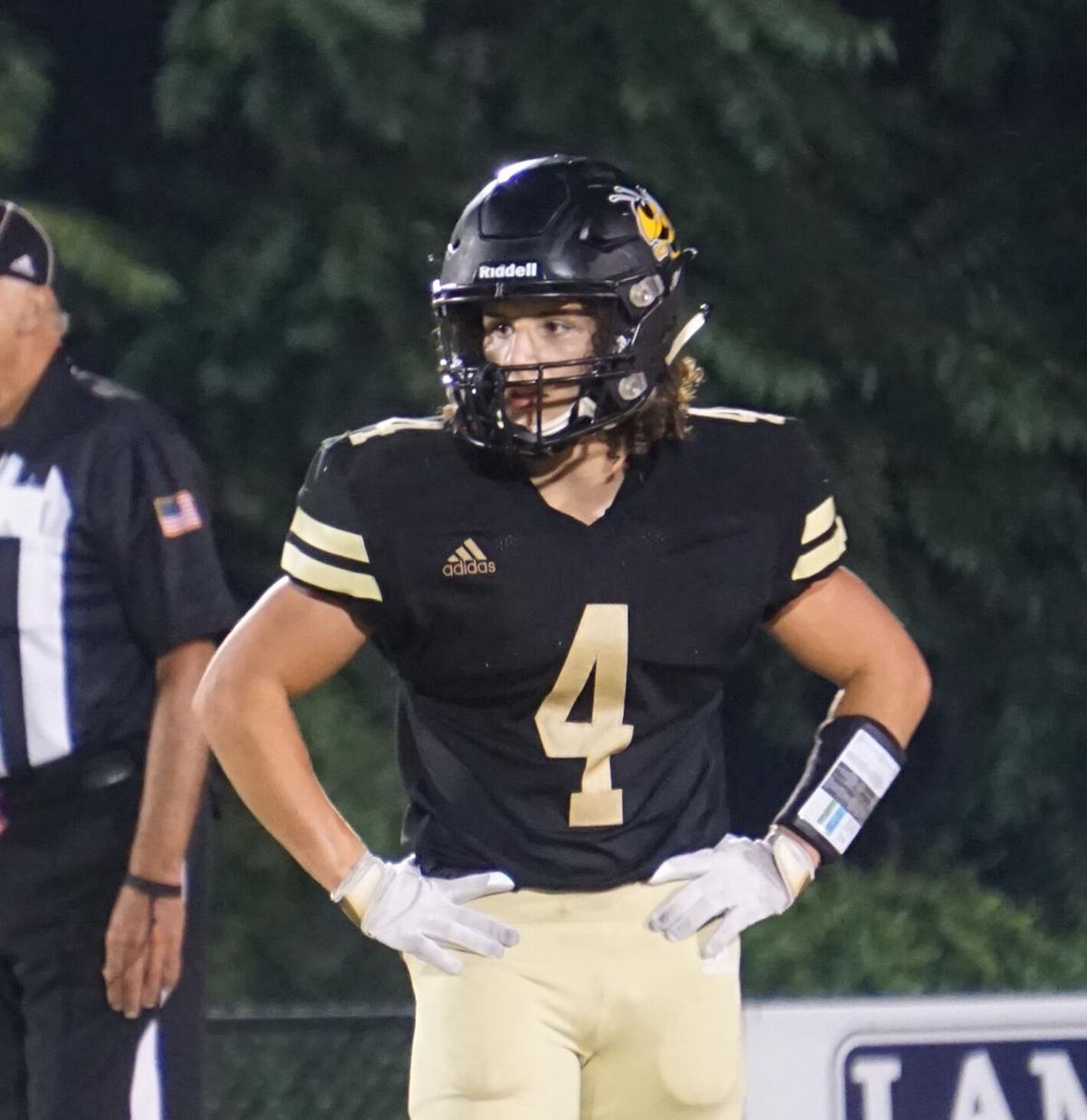 Geraldine's Austyn Banks (1) runs against a pair of Sardis defenders during a non-region game in Geraldine last Friday night.

Plainview's Brodie Bryant (5) keeps the ball after faking a handoff during a Class 3A, Region 7 game against Asbury last Friday night.

Fyffe’s Brodie Hicks avoids a tackle during a game against Collinsville at Paul Benefield Stadium earlier this season.

Undefeated Plainview welcomes Geraldine for a Class 3A, Region 7 game in Rainsville at 7 p.m. Friday.

The 3-0 Bears dove into region play with a 54-6 demolition of Asbury last week.

Powered by a potent and balanced running threat, Plainview compiled 395 yards on the ground and 460 total yards, as 13 different players recorded rushing attempts.

Braiden Thomas led all Plainview rushers with three carries for 59 yards with a touchdown. Sam Crowell ran for 58 yards on four attempts and Dylan McCullough finished with 42 yards on three carries.

The Bears’ defense held Asbury to 146 total yards. Thomas and Ben Smith each collected a fumble.

Meanwhile, Geraldine earned its second straight win with a 39-0 thrashing of Class 5A Sardis last week, improving to 2-1 overall.

The Bulldogs had success both running and passing, gaining 242 yards rushing and 192 yards passing.

Jaxon Colvin accounted for four touchdowns in the win. He led the team in rushing with 130 yards on 14 carries with one score and completed 5 of 10 passes for 192 yards and three touchdowns.

In the all-time series between Plainview and Geraldine, the Bears lead 27-17-2, according to the Alabama High School Football Historical Society’s website. Plainview won 30-16 in last year’s meeting, snapping a two-game losing streak to the Bulldogs.

As the Collinsville Panthers travel to Sylvania for a 3A, Region 7 contest this week, they’ll look to not only earn a second region win, but also end a series losing streak.

The Panthers visit the Rams at 7 p.m. Friday.

Entering Friday’s game, Sylvania (2-2, 1-1 3A, Region 7) has won the previous five meetings against Collinsville (2-2, 1-1), spanning as far back as 1988, according to the Alabama High School Football Historical Society’s website.

The Rams beat Collinsville 35-0 last year, renewing the series after the two became region opponents as part of the AHSAA’s offseason realignment. Prior to the 2020 contest, Sylvania and Collinsville hadn’t played since September 1991, when the Rams won 15-12, according to the Alabama High School Football Historical Society’s website.

The Panthers scored on their first six possessions, offensively. Their special teams defense picked up a safety on a muffed punt. All scoring came in the first half.

Keaton DeBoard ran for two touchdowns on three carries, threw a 25-yard touchdown to Colton Wills and added an 83-yard kickoff return for a score for Collinsville.

Fernando Padilla led the Panthers in rushing with 73 yards and a score on five carries. Carson Dennis had a rushing touchdown and an interception and Tytan Morgan also had an interception.

Roberto Diaz kicked off seven times with all kicks going into the end zone, giving Collinsville good field position most of the night. Tristan Gallegos made all six extra-point kick attempts and also punted.

Sylvania pushed undefeated Fyffe to the brink in a 16-13 loss last week.

All points were scored in the first half.

Smith threw a touchdown pass with 4:08 remaining in the opening half to bring the Rams within 16-13.

Sylvania made a goal-line stand in the opening half, shutting down Fyffe in a fourth-and-goal situation at the 1-yard line.

Sylvania’s Brody Smith completed 26 of 52 passes for 297 yards with two touchdowns. Sawyer Hughes caught 10 passes for 144 yards, Zack Anderson had seven receptions for 94 yards with a score and Josh Scott had 43 yards receiving on four catches with a touchdown.

Following their winning escape at Sylvania last week, the Fyffe Red Devils return home to play the Brindlee Mountain Lions in a 3A, Region 7 tilt at Paul Benefield Stadium at 7 p.m. Thursday.

Fyffe extended its streak to 48 wins in a row, including 61 consecutive regular-season games and 41 straight region contests.

Fyffe trailed 6-2 heading into the second quarter at Sylvania last Friday before a 25-yard scoring run by Brodie Hicks and an extra point gave the Red Devils a 9-6 advantage with 9:48 left in the half.

A Kyle Dukes 2-yard scoring run pushed the lead to 16-6 before Sylvania added a score with 4:08 to play until intermission.

In their all-time series with Brindlee Mountain, the Red Devils are 3-0, according to the Alabama High School Football Historical Society’s website. They won 54-6 in last year’s meeting.

Brindlee Mountain remained winless after taking a 44-6 loss at Collinsville last Friday night. The loss continued a Lions’ losing streak that extends from the 2017 season.

Coming off their first win under first-year head coach Charles Hammon, the Valley Head Tigers return home to face the Gaylesville Trojans in another 1A, Region 7 matchup at 7 p.m. Friday.

Gaylesville enters with a 2-0 region record and a 3-1 overall mark, having defeated Coosa Christian 20-17 last week.

Valley Head (1-3, 1-1) has a 39-21 series lead vs. Gaylesville, according to the Alabama High School Football Historical Society’s website, including victories in the last two meetings.

Valley Head took a 20-0 lead by the end of the opening period and pushed it to 39-0 by the half. Woodville’s lone score and 2-point conversion came in the fourth quarter.

In the win, Bain threw for 118 yards on 2 for 2 passing; he ran for 170 yards on five carries. Brown carried eight times for 181 yards. Pacey Cooper caught an 83-yard touchdown pass and Mason Vest added a 35-yard scoring reception.

Ider looks to rebound from last week’s loss with a visit to Section for a 2A, Region 7 contest at 7 p.m. Friday.

The Hornets battled to a 20-17 loss against Tanner last Friday night to make their record 2-2 overall and 1-1 in region play.

Ider maintained a 10-point lead into the second half before Tanner scored the game-winning touchdown with 1:58 remaining in the game.

According to the Alabama High School Football Historical Society’s website, the Hornets hold a 24-14 series lead against Section. Ider was forced to forfeit last year’s meeting due to COVID concerns. In the previous matchup in 2019, Section won 12-0.

Section notched wins against Collinsville and Valley Head this season and took a loss at Tanner.

Shannon J. Allen, publisher of The Sand Mountain Reporter, and Will Gaines, special to The Times-Journal, contributed to this report.